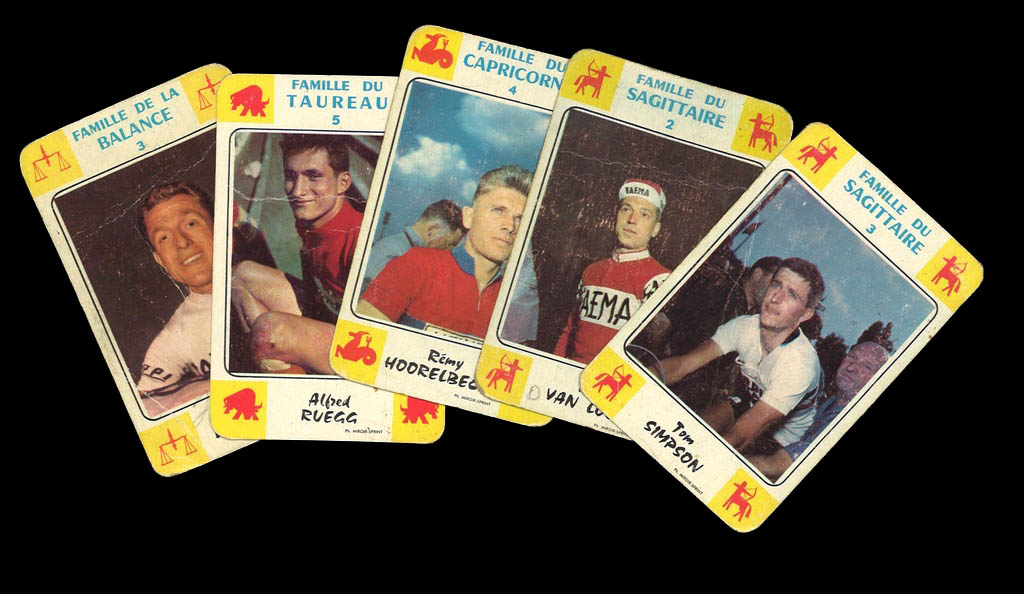 Here is a quite weird French "Happy Families" game which mixes cycling and astrology. I only have 5 cards, and I have never heard of a complete set, so I guess cards were given as a bonus with something else (whatever it may have been). Again, the pictures are credited to Miroir-Sprint and since there are no other references, I have to consider Miroir-Sprint (even more reluctantly than in other cases) as the publisher of the game. I admit I do not know much about this game, If you know more than I do, please contact me.

What I do know is that the complete deck was composed of 60 cards, 12 families of 5 cyclists, grouped by their actual astrological sign, and that the information at the back of the cards include the results of the riders up to 1960. Rick Van Looy, for instance, was World Champion in 1960 and 1961 and his card only features the first title. He also won important spring races at the beginning of the 1961 season (among them Paris-Roubaix and Liege-Bastogne-Liege). So the game is quite easy to date since it was made after the end of the 1960 season (that is quite sure) and most probably before the beginning of the 1961 races. Therefore it is quite safe to date the game in (the early months of) 1961.

I said above that I only have 5 cards, the ones displayed here, but I have information and scans of many more (though not of all of them), so I am quite sure of what I say I know about the deck.

The five cards I have (quiz: which back matches which front?)

The astrological "information" does not change for the riders of the same astrological as you can see in the two cards of the Sagittarius family.