Hard to find and also hard to date German game. I had never heard of Ruro-Spiele from Leipzig. From the bicycles and the public's dresses depicted in the nice cover illustration (signed "F.Bucholz"), I am not sure if the game is from the inter-war period, or even from before. The e-s-g website dates it from "ca. 1930", which is also possible. Any further information is welcome.

There are six riders in the game, divided into two teams. Three of the riders (black, red and yellow) have a special lap counter in their back wheel. These riders are moved with the three coloured dice on the outer lane (with roman numerals) and try to win a lap over their competitors. The game rules calls them "Tempofahrer", which might be translated as "endurance riders".

The three other riders are sprinters. They race each other on the inner lane at given intervals and compete just for some points which count only in case of a tie in the number of laps won. 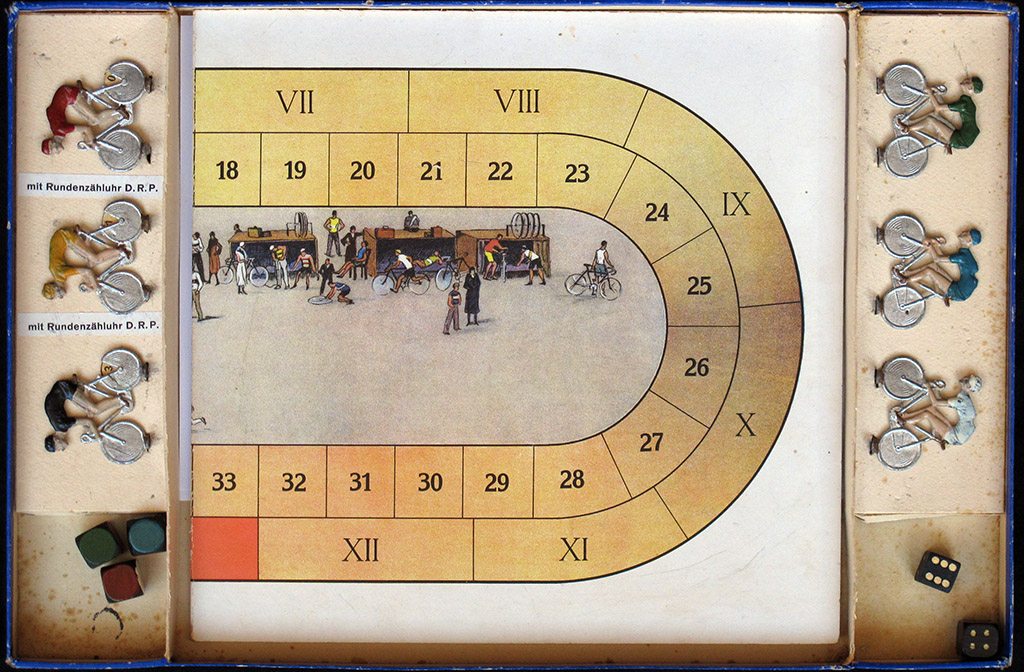 There are the three coloured dice. Unfortunately, some previous owner of the game has repainted them (by the way, the two regular dice featured in the pictures are not original. If someone has the original dice, please sent a picture). 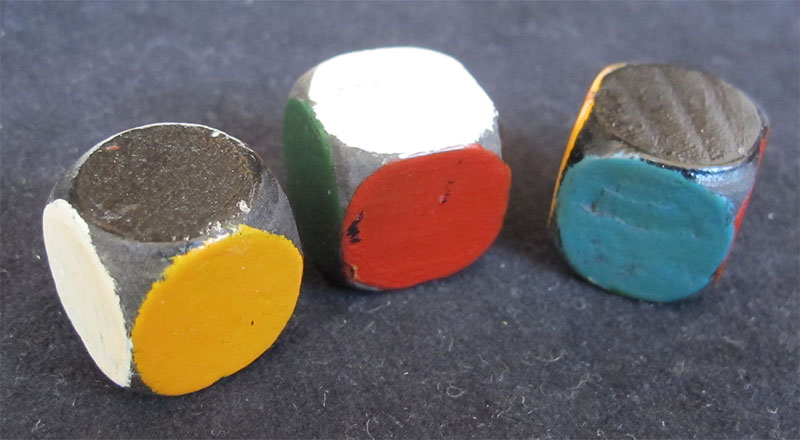 These three dice are thrown in turns and the riders in the outer lane advance as many fields as dice mark their colour or their teammate's (three-coloured dice would have been enough and probably better). However, if in a turn none of the dice shows your colour(s), you fall back to the red square with no lap won.

So you hope for a long run of throws with at least one of your colours to win a lap. And most often than not you get a bad throw when you have completed more than three quarters of a lap and you are very near your objective. That hurts!

This rule is  very simple, but it represents nicely the feeling of trying to win a lap in a track-cycling race.

Meanwhile, the sprinters wait their turn to play. At intervals (the rules are not particularly precise here) the coloured dice are put aside, the riders on the outer lane stay wherever they are, and a short sprint takes place between the three riders on the inner lane. No complicated rules here either, just throw and move, with a couple of penalty squares (2 -only reachable by a double one on the first throw- and 13). Teams whose sprinters land twice on these squares during the game (in different sprints, most probably) are penalized with one lap.

The rules state that some player or onlooker can call a sprint anytime during the game for a special price he is willing to offer (a present for the winner of that sprint). Just like the "primes" in 6-day races.

The game rules are not clear either (or maybe it's my german) about the length of the game. Players have to decide it before the game starts.

The 5cm riders are way too big for the board if you are looking for realism, but they are ok for the playability of the game. They are stable and fit well enough in the track squares. (At least their front wheel does).

Lap counters on the back wheel the endurance riders.

The sprinters do not have a lap counter. 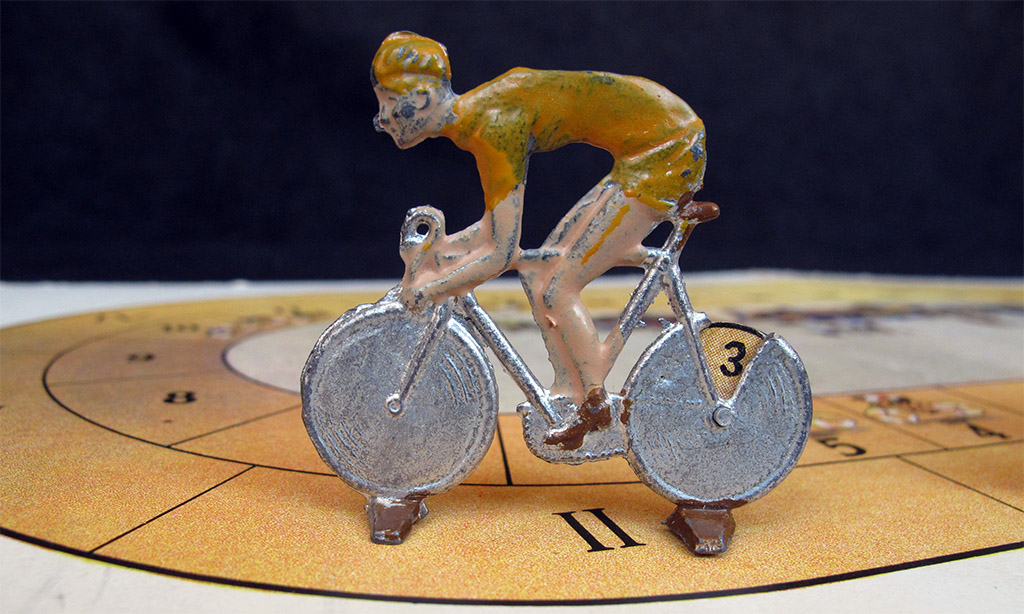 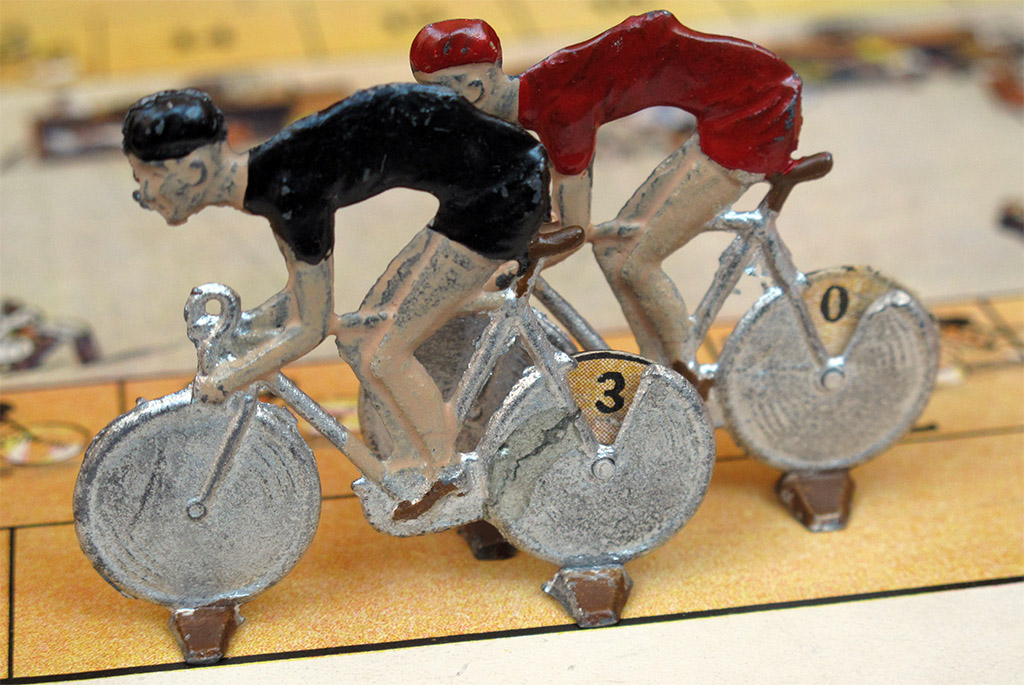 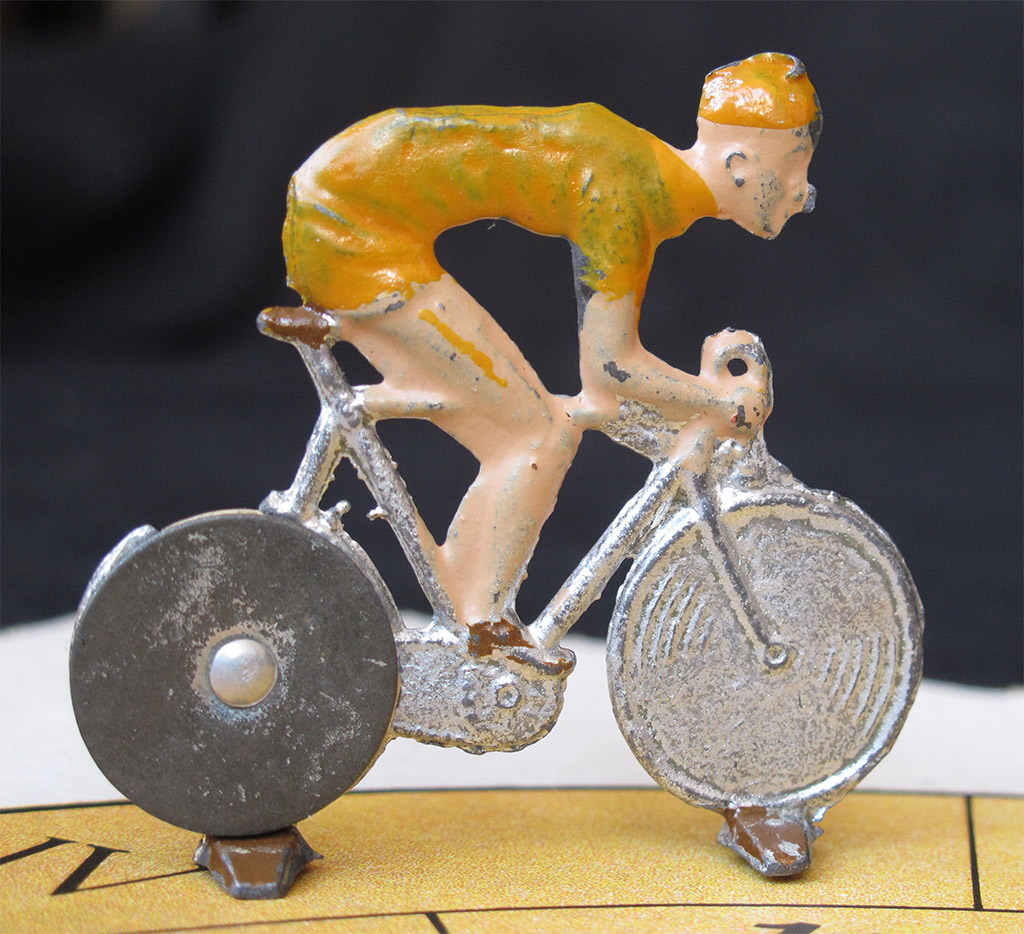 The "dark" side of the back wheel. 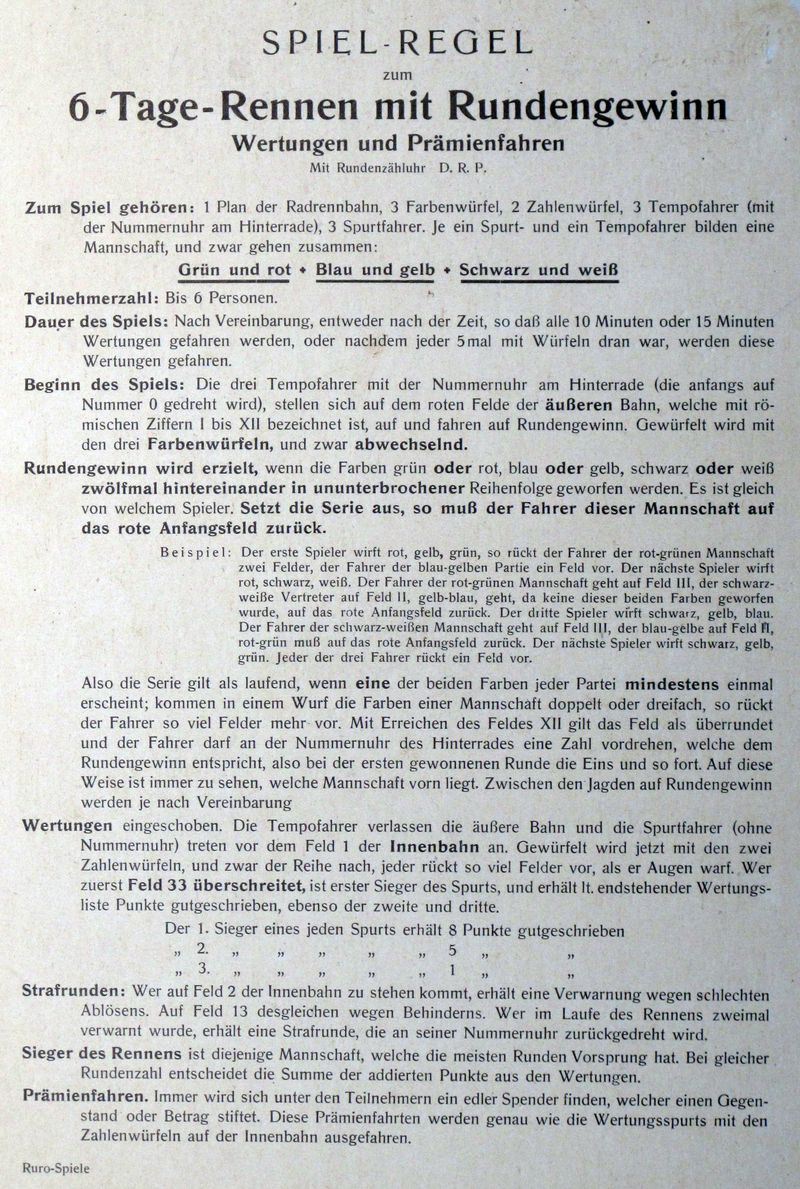 Of course there is no strategy at all in the game, no decisions to be made. It does not matter who throws the dice. Not a game to please hardcore gamers, obviously. As far as I can see it, it is a betting game in which, despite what the rules say,  any number can play.  But then 6-day races were all about betting. And this is a great betting game which goes straight to my list of favourite games. 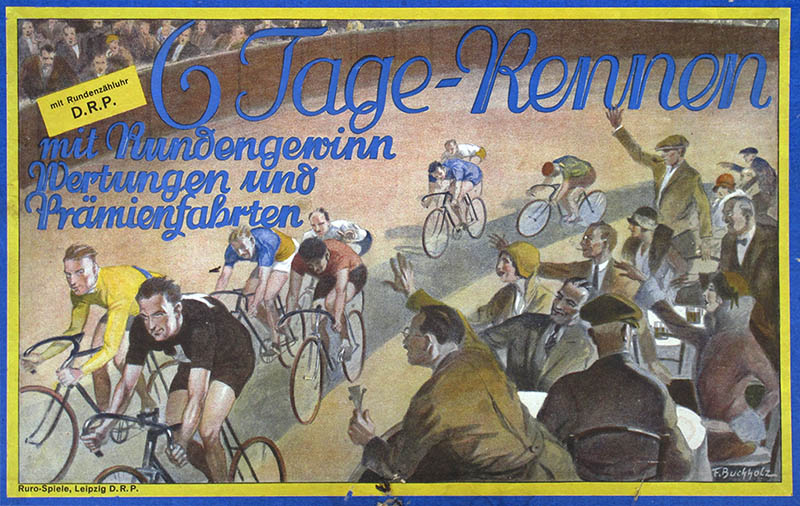 Thanks to Laisvydas and to Stephan Krug for independently tipping me about this one being for sale. It's nice to have friends!