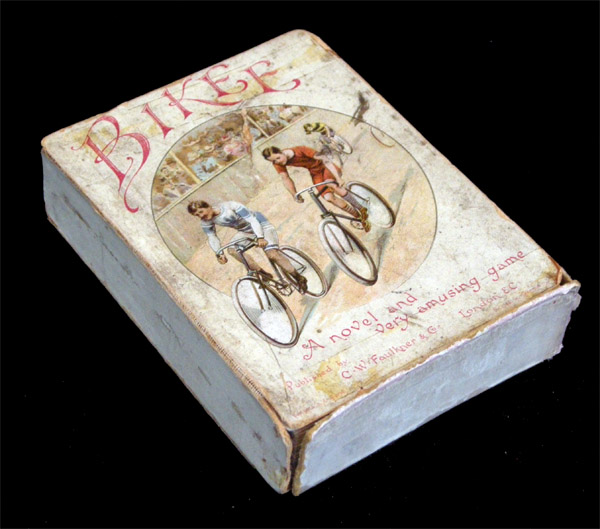 This small game is part of a series known as "the Upidee range". All the games had the same rules but different themes. The series started in 1893 with a horse racing game (Upidee). Three new games were released in 1899: Fox and Geese, From Sailor To Admiral (nicely reproduced in Adrian Sevilles Vintage Board Games book) and Bikee. Finally, three other games completed the series some years later: Aerito (1907, aviation/planes-themed), Flyto (1908, aviation/balloons-themed) and Pip-Pip (1909, motoring-themed)

There is a French edition of this game called "Le Jeu de la Bicyclette".

Alain Rabussier (from the website Jeux Anciens de Collection) remarks that there is also a German edition, made by Bernard Dondorf, of which unfortunately we do not know the name. 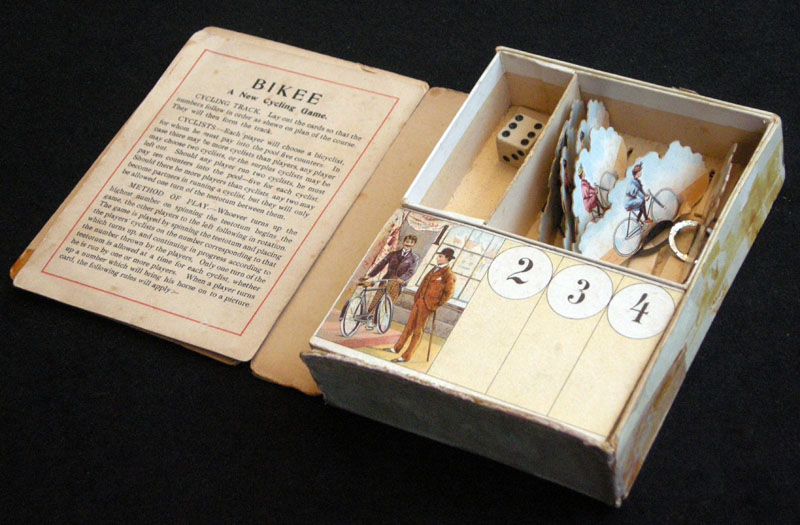 Compared to other turn of the century games, this was surely a cheap one. See the cardboard riders... 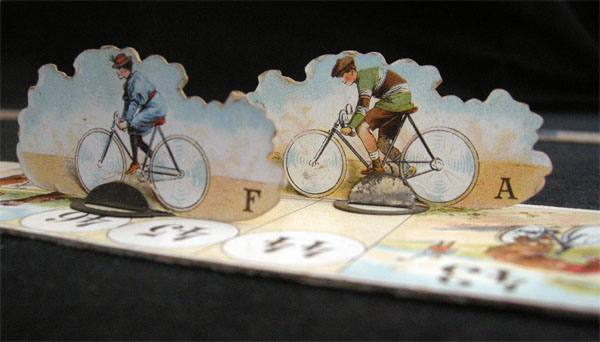 Some tiles (If you are interested in a scan of the complete set, email me) 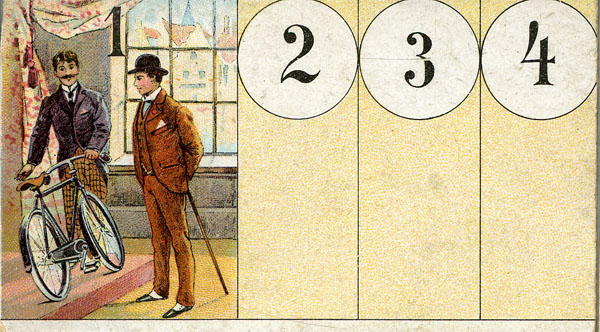 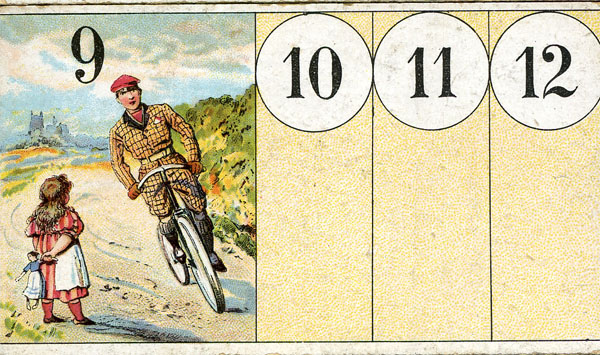 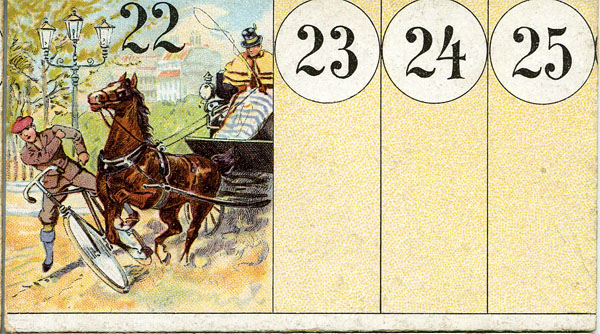 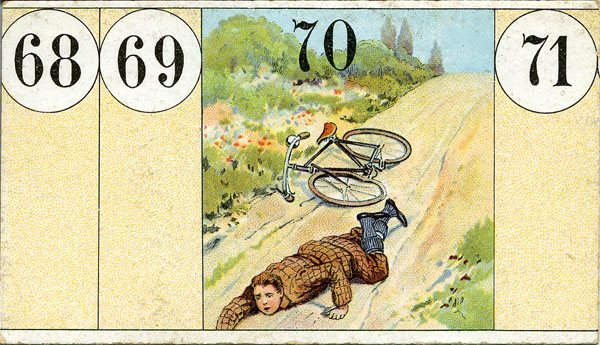 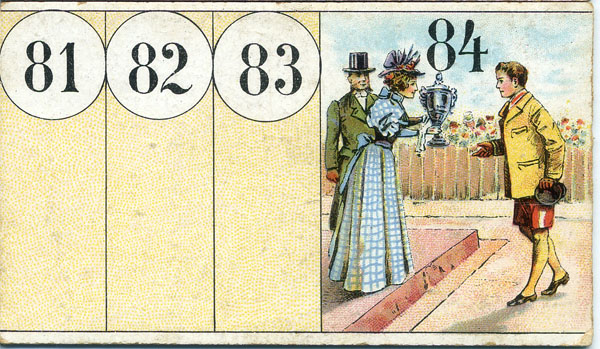 The rules mention a teetotum, but I have a die in the game (an old die, for that matter, contemporary of the game). I am not sure whether the teetotum is missing in my copy of the game or it was replaced with a die in some versions of the game but nobody cared to mention it in the rules. Scroll down for a picture of an original teetotum.

By the way, notice the mistake in the last sentence of the rules: "...will bring his HORSE on to a picture card..."  Copy and paste mistakes are older than computers  ;-) 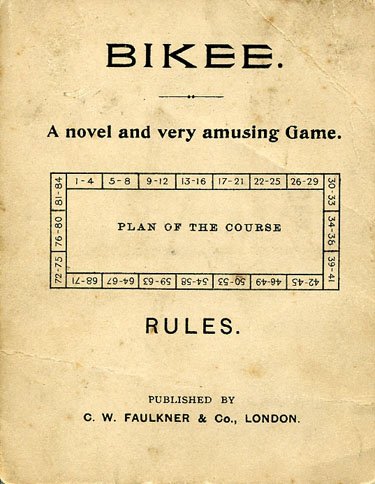 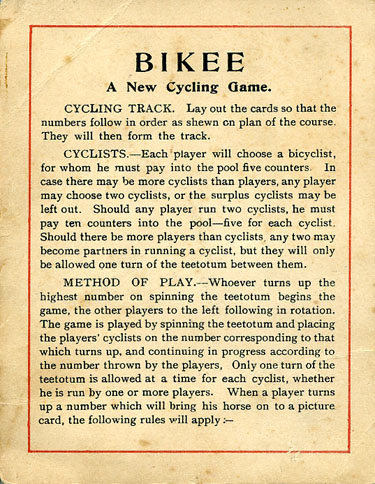 Bernard Galau has been nice enough to send me scans of the French rules. These rules also mention a teetotum ("toton") instead of a die. 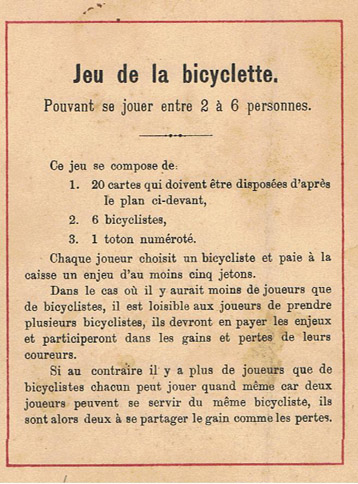 It is interesting how some apparently negative accidents (fields 22 and 47) are eventually positive since the player is supposed to receive a compensation for damages. 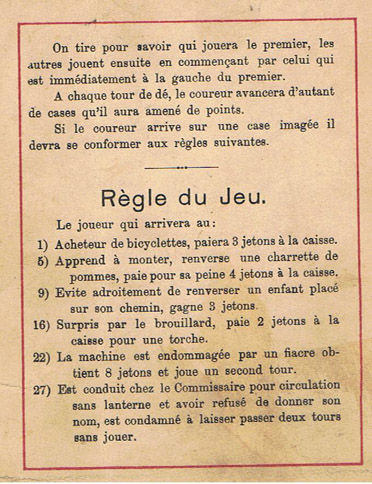 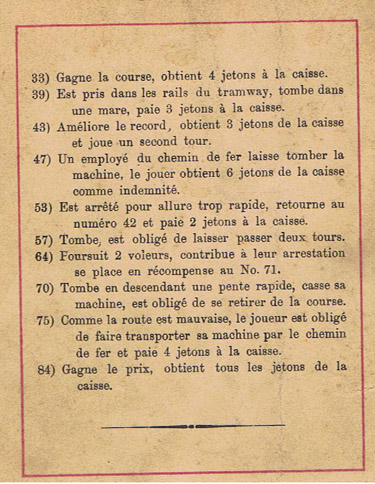 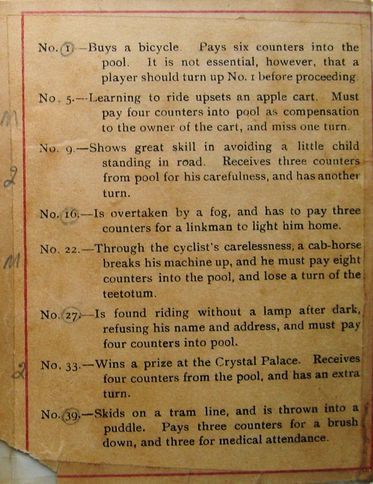 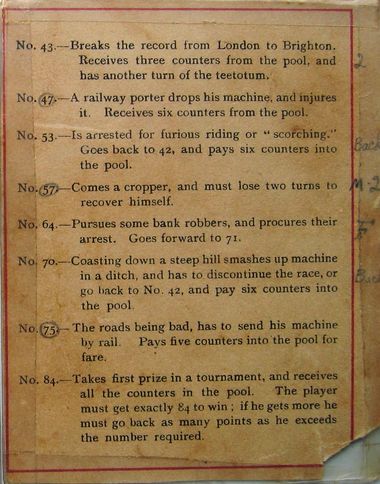 You may notice some differences between the English and French rules, and you may also notice that in general the rules for the English riders are tougher:

Quite surprisingly, the rules for squares 43, 47, 57 and 64 are similar in both versions of the game.

Thanks to Adrian Seville for the permission to use his scan of the rules.
Thanks to Eamon for his knowledge about the Upidee range.
Thanks to Dennis for the tip that allowed me to buy this game at a fair price  :-)

UPDATE: This game has been recently reissued by House Of Marbles. Even though their historical accuracy is not that good ("a game from the 1920s"???), there isn't a teetotum in this reissue (but then I do not have it either in my original copy of the game) and the red counters are quite cheap (and not present in the original), it is not a bad facsimile. Furthermore, it is not expensive. So if you cannot fins a copy of the original game, this is better than nothing. 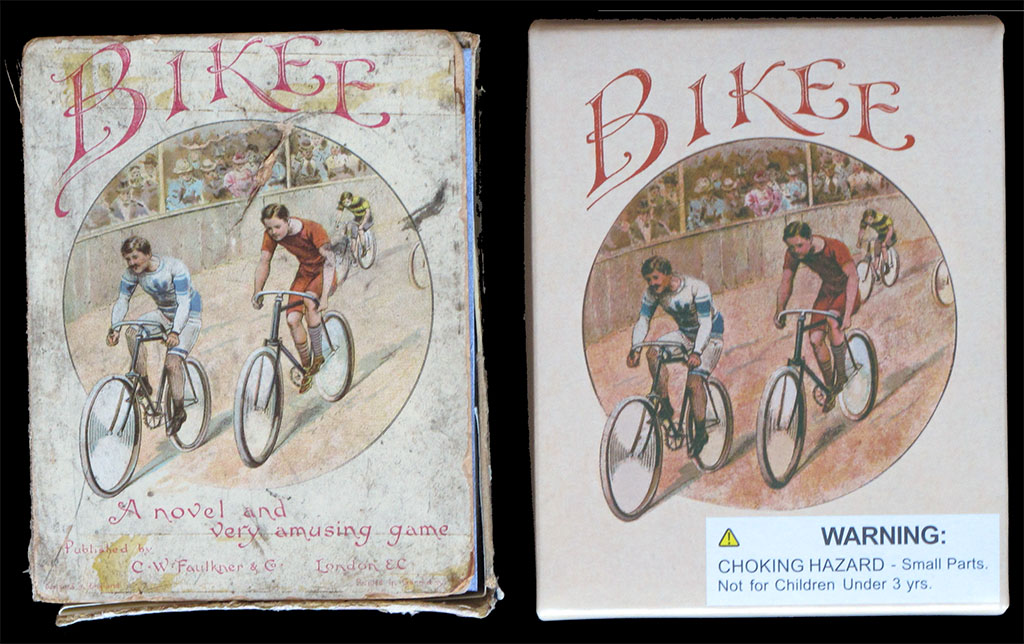 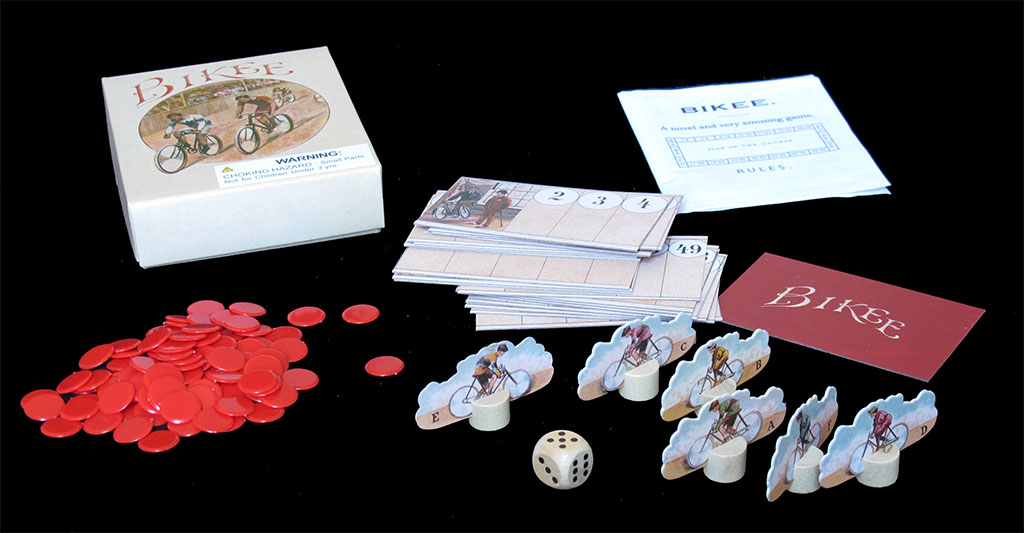 Contents of the box. 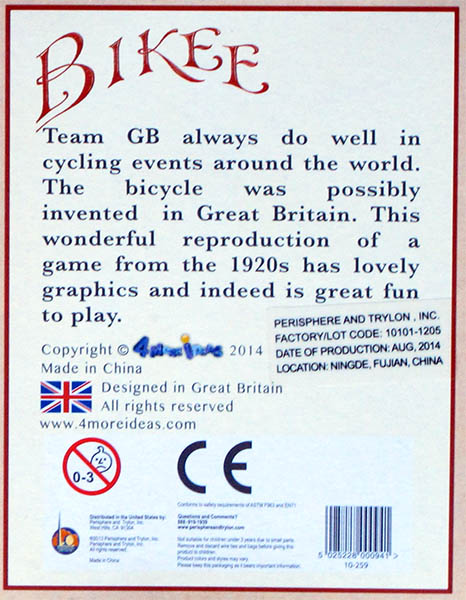 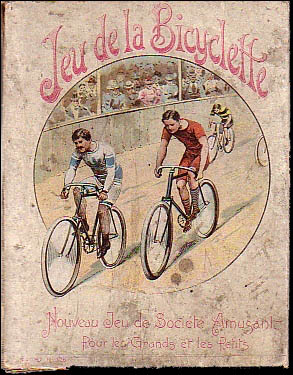 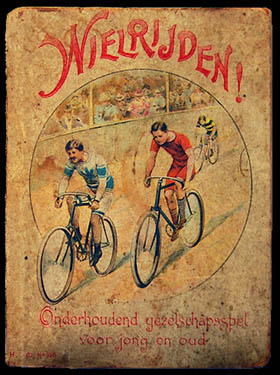 Here are the French and Dutch versions of the game. The Dutch version used to be displayed in the now-defunct HONGs website. Fortunately, part of the contents of the website have been transferred to the Vlaams Spellenarchief, from where I have adapted the picture (thanks, Fred & Rob). 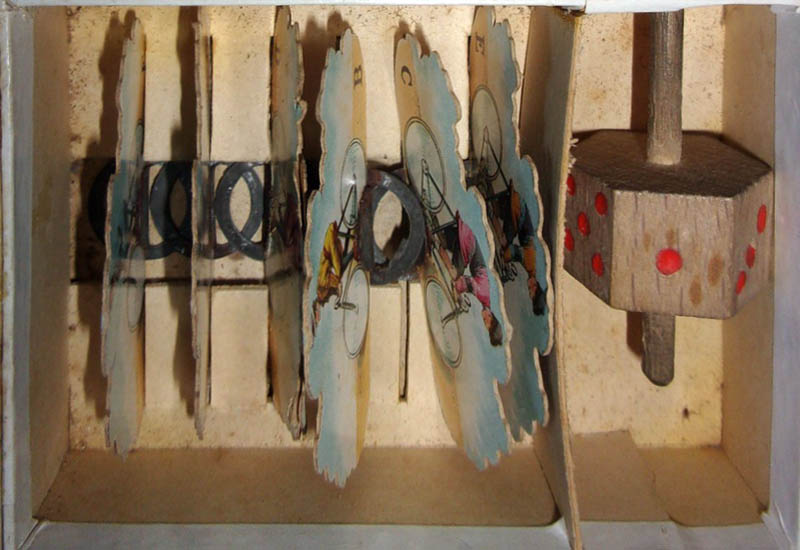 In this picture sent by Didier Maria (thanks!) you can see the teetotum mentioned in the rules.