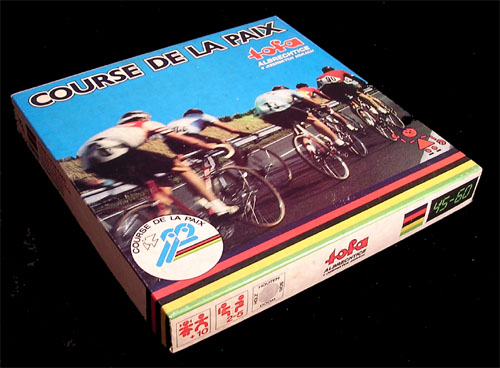 The Course de la Paix (Peace Race) was the most important cycling race behind the iron curtain. It started in 1948 (and was run until 2006, though in the last years the importance of the race was much lesser, and it was not run by national teams anymore). No wonder there are a few games about the race.

This one is a Czech game from 1991. It is a dice-based game for 2 to 5 players, who manage a team of 4 wooden numbered cyclists. 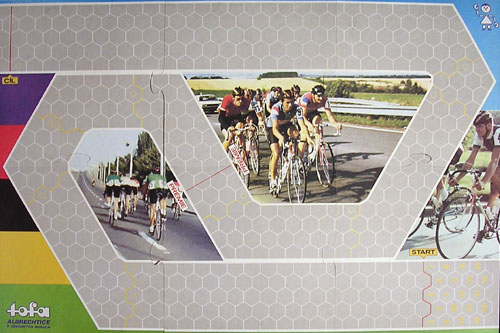 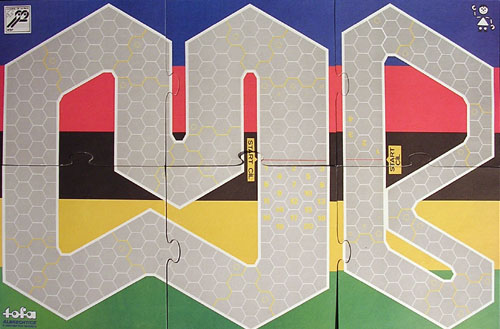 The board is composed of six interlocking parts and is quite big (90 x 60 cm) when assembled. It is reversible. It features a road on one side and two circuits on the other. You can play three different races, (called "Stage", "Criterium" and "Individual point race"). You can also play a stage race composed of as many of the mentioned races as desired, but not much more is specified about it in the rules, except that you add the points of the indiviidual stages. The rules even mention the possibility of best climber and best sprinter classifications, but they do not specify how it should be done. I do not thik this is enough for this game to qualify as a "stage race game". 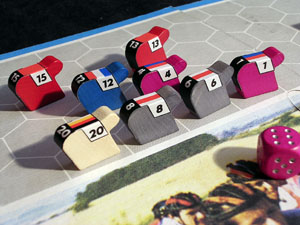 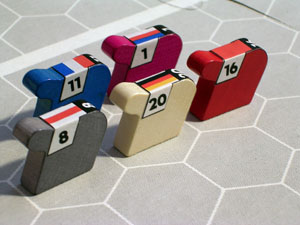 The game mechanics are quite simple. There are three couloured dice with different values:

A rider can use the basic violet or the yellow braking dice for a normal move. The red dice can only be used in a breakaway. A rider in front of a group (or alone) may only use one die, and his movement is penalised by air resistance (throws of 4, 5 or six become 3, 4 or five, therefore losing one pip).

Riders in a peloton may follow the rider in front of the group or throw the die themselves. In this case they move the full throw.

Throwing 2 with the violet die is not a bad throw for the rider alone in a breakaway or in a "escape position" (in front of the group) since he has an extra throw with the pink die. If he desires to draft other riders in the group, he does not advance the two fields of the basic die throw, and in this case he may be drafted for the full value of the pink die. If he does not want to be drafted from, he moves the value of both dice (2 +  the value of the pink die). If one of the fother riders in the group throws 2, he may "catch the escape".

If a cyclist decides to use the yellow die, the two riders behind him must follow him (and are not allowed to throw a die in that turn) 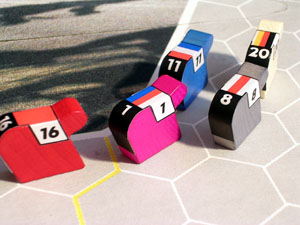 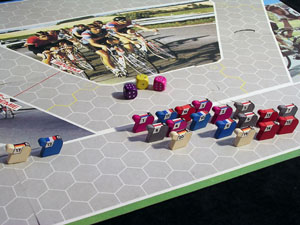 Strangely, both the rules and the box feature this five-language description, but the booklet inside my copy of the game is only in Czech.