CYCLING (A FASCINATING GAME)
aka A CYCLING TOUR 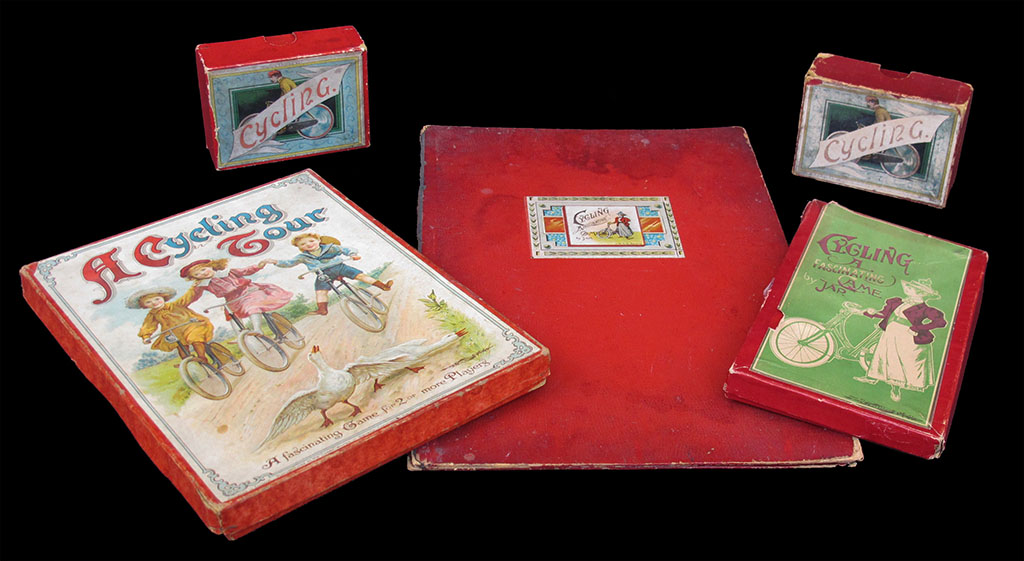 A classic game which has been reissued a number of times in different formats and under different names. As far as I know, the earliest version is the one with the big board and the small components box. As most many old British games, it was not sold in a big box containing the board AND the game components, but in two parts. This makes it difficult to find both parts together. As you can see, I have two of these boxes. The one that looks older (on the right) is the one I got with the board, but I am not sure it was the one originally sold with it. This box looks somewhat older than the board. On the other hand, the second box, which I purchased separately, looks/feels roughly the same age as the board. 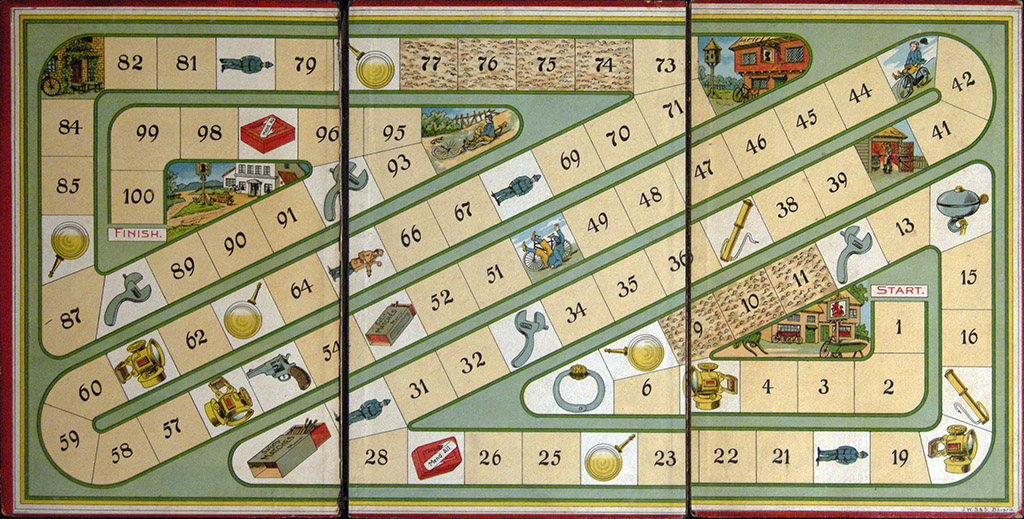 The big board measures 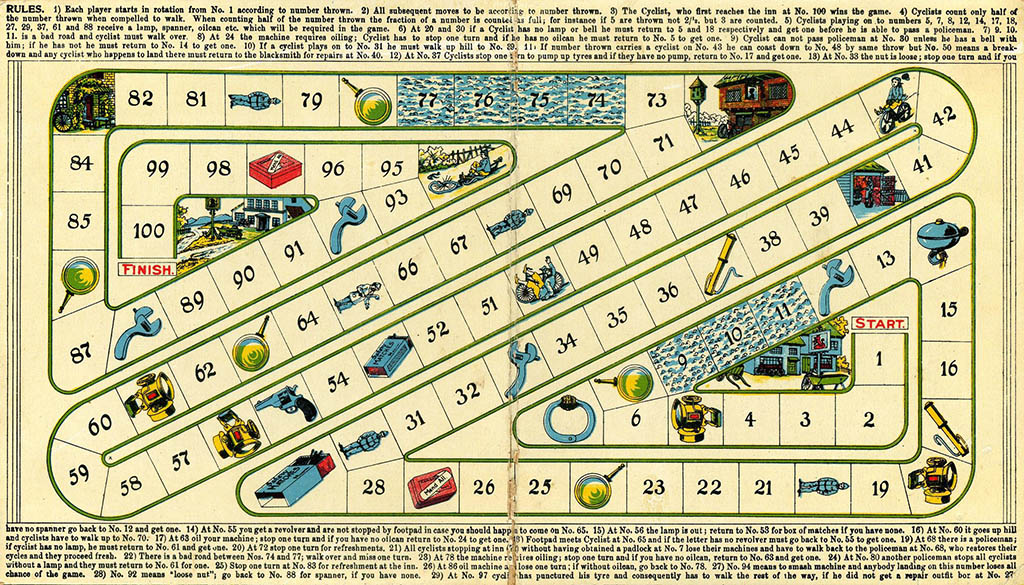 The smaller boards, belonging to the boxed versions of the game, measure 35 x 20 cms and have the instructions printed on them. 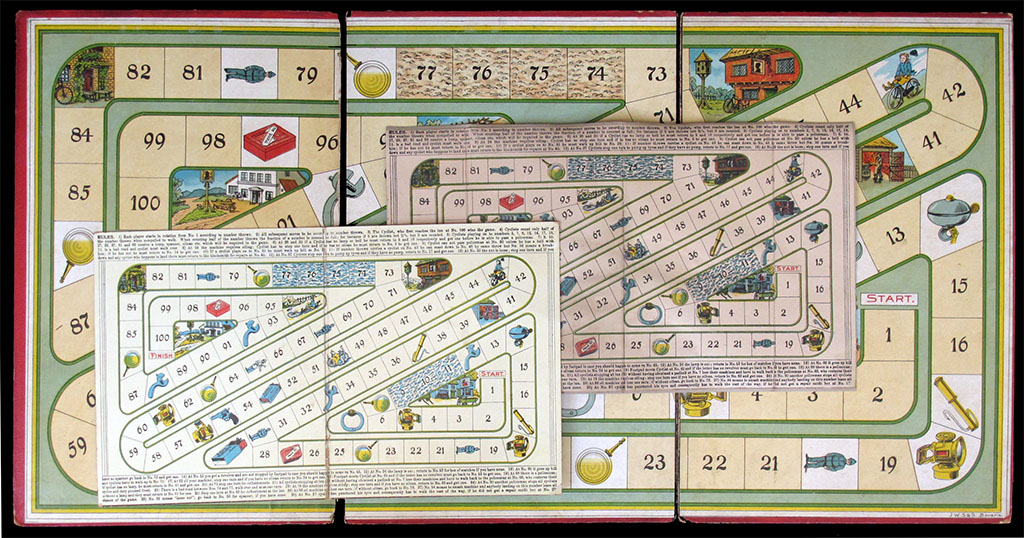 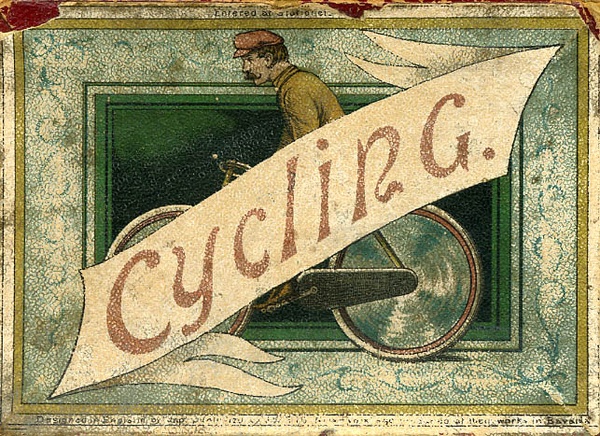 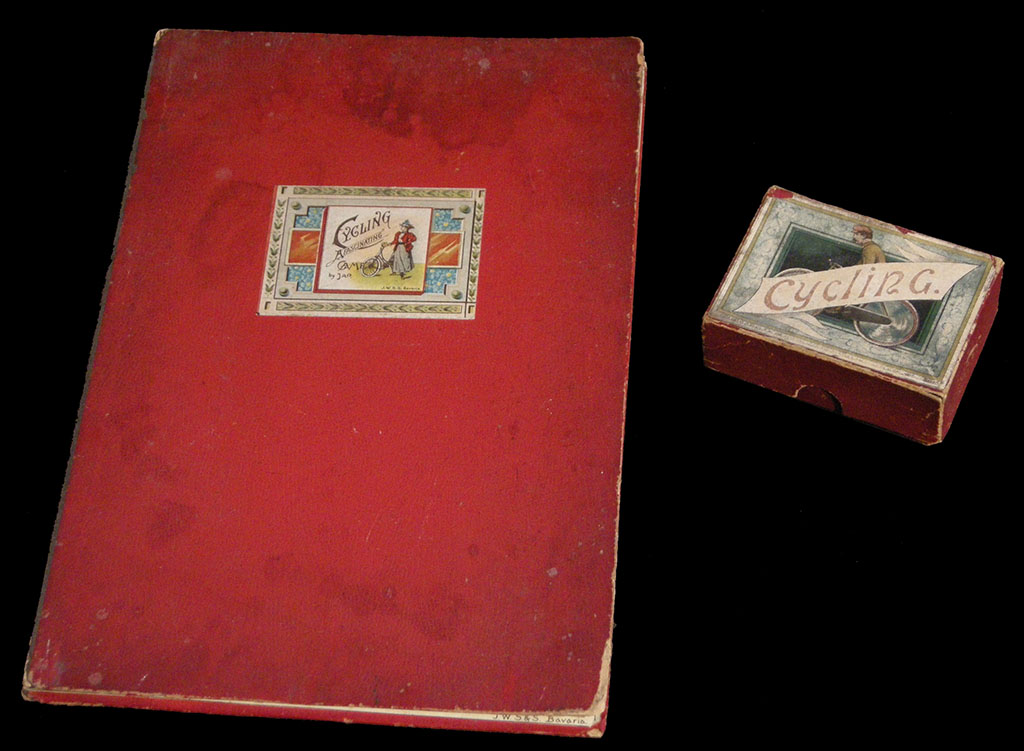 This might be the original version of the game. Notice the "J.W.S.& S, Bavaria" inscription. 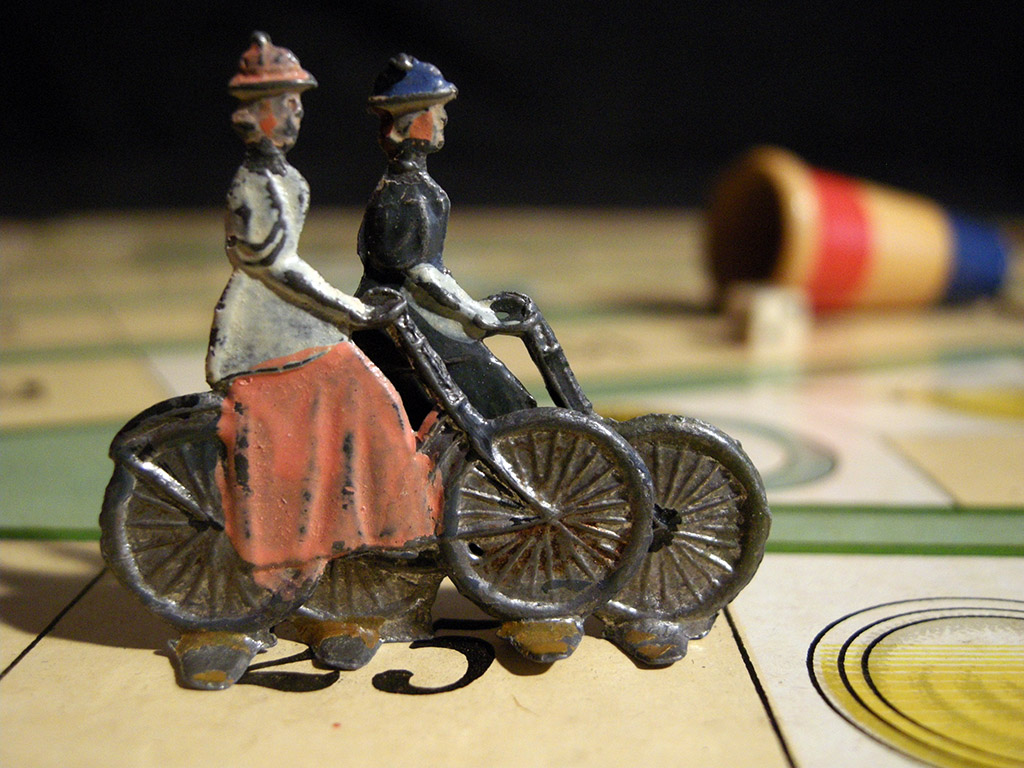 Of the four tin cyclists, two are male and two are female. These are the ladies. 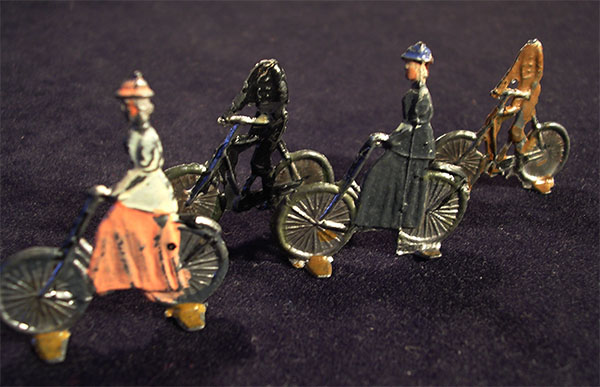 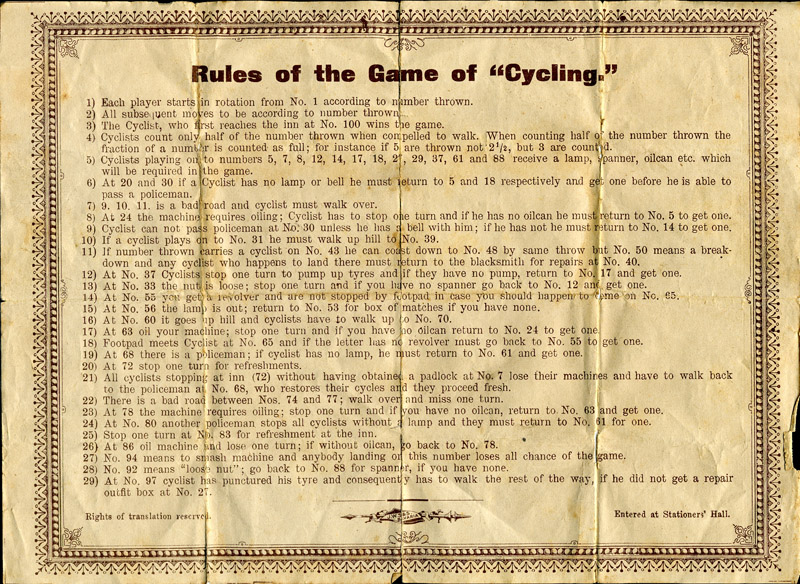 Rules found inside one of the components boxes (J.W.S. & S., Bavaria) 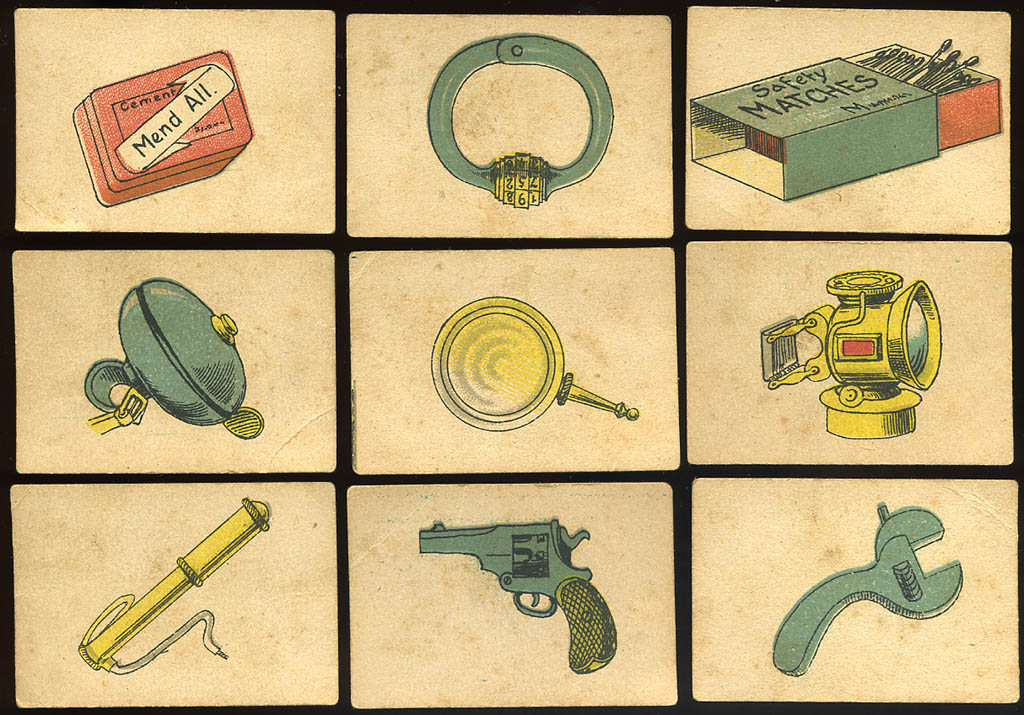 Cards found inside the implements boxes. There are 3 of each. 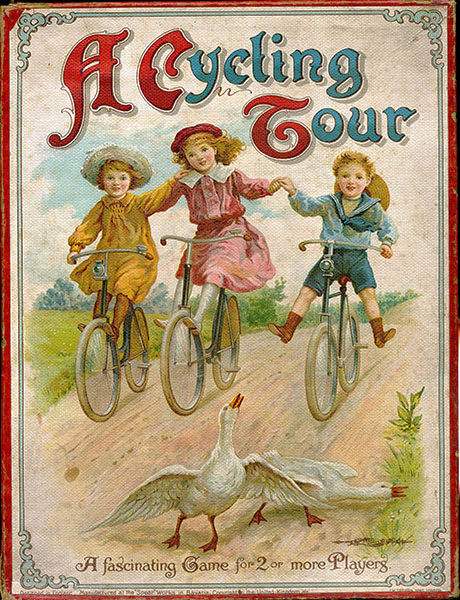 "A Cycling Tour"  is a small box (27 x 20.5 cms) which says: "Designed in England. Manufactured at the 'Spear' works in Bavaria. Copyright in the United Kingdom. J.W. Spears & Sons. London". 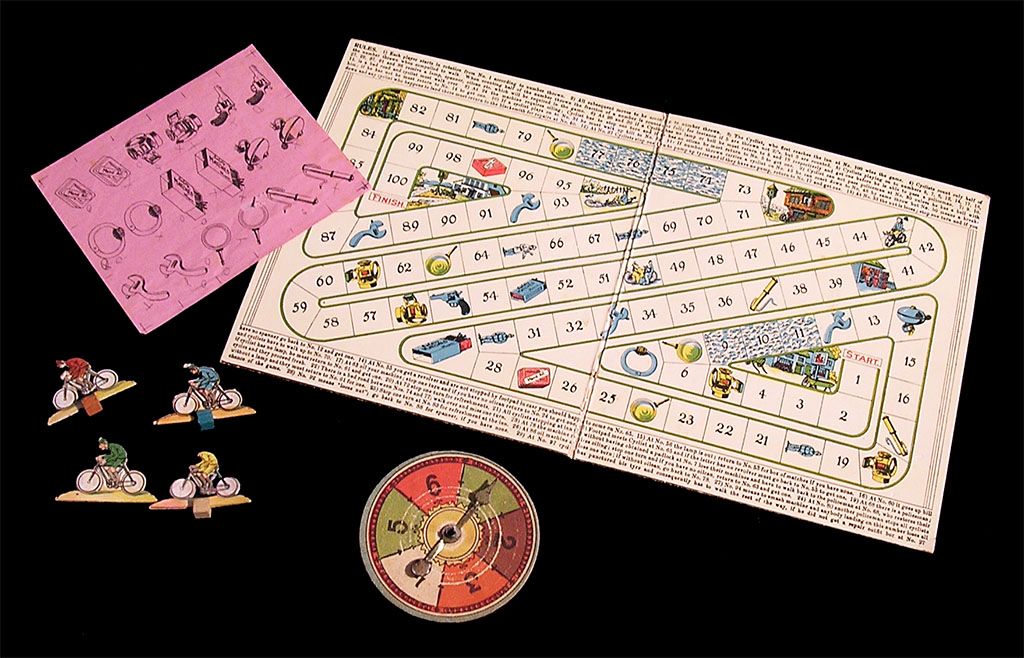 The box contains 4 small wooden-based cardboard riders, a comparatively small (35 x 20 cm) board with printed instructions, and (just) 18 cards printed on a thin cheap pink paper. My box contains a spinner which I am not sure whether it originally belonged to the game. However, the game rules are not only printed on the board but also glued inside the lid of the box. They are titled "Rules for the game of 'Cycling' " and are almost equivalent to the ones above except for the last sentence: "A teetotum may be used in place of dice". Might this spinner be the said teetotum? 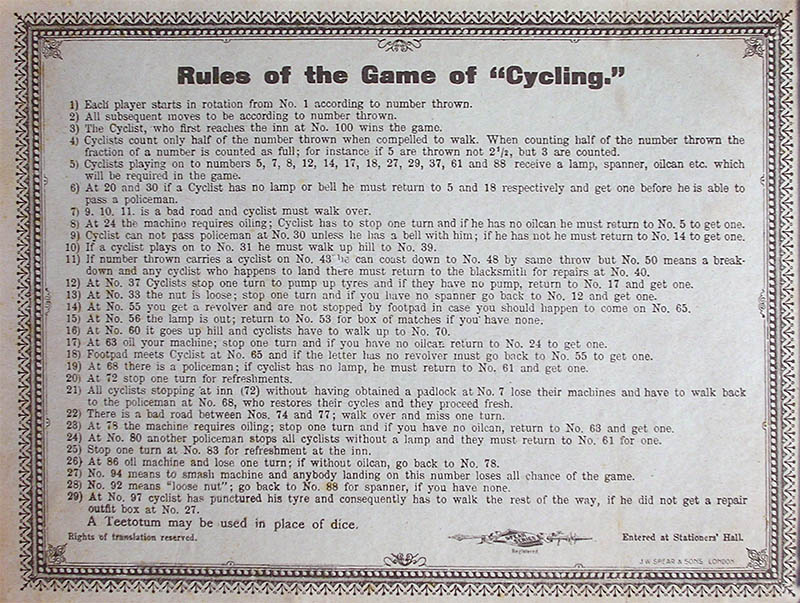 Rules glued inside the box lid of "A Cycling Tour" (J. W. Spear & Sons, London).
Notice the last sentence "A teetotum may be used in place of dice" 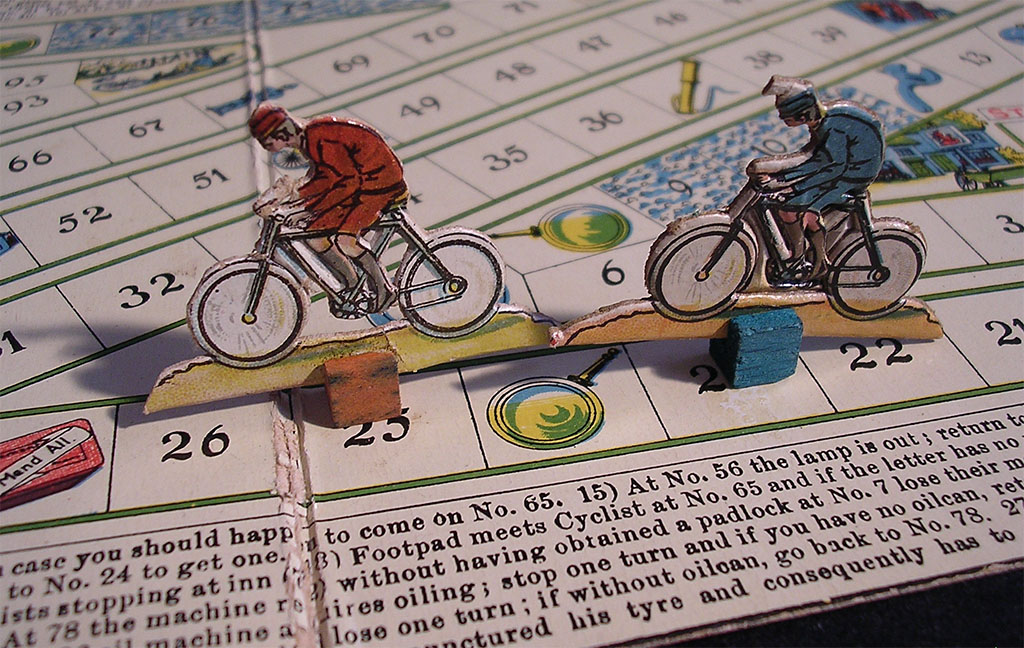 Close-up of the cardboard riders. 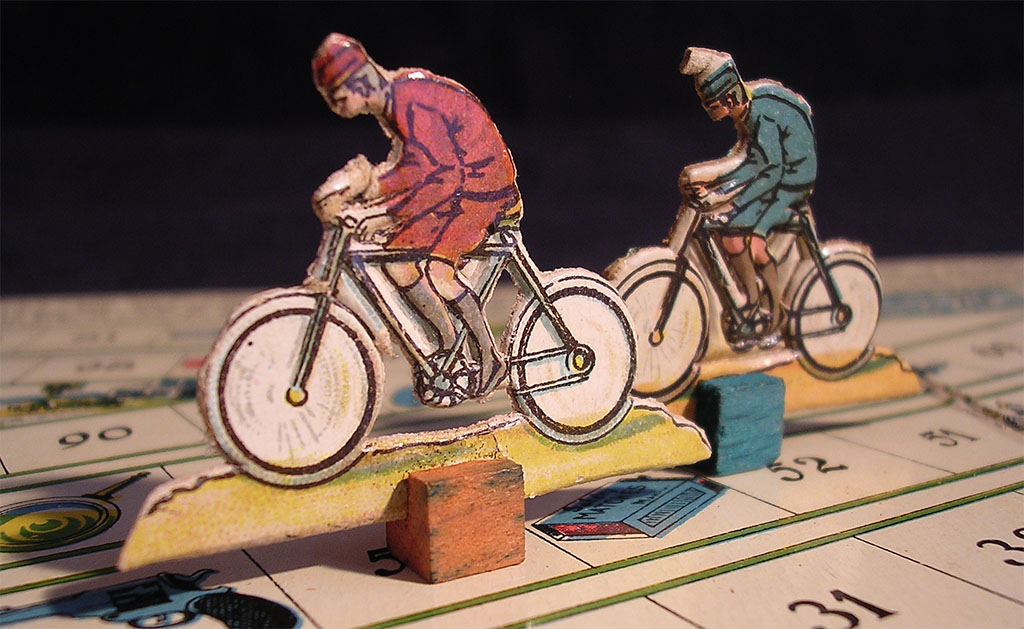 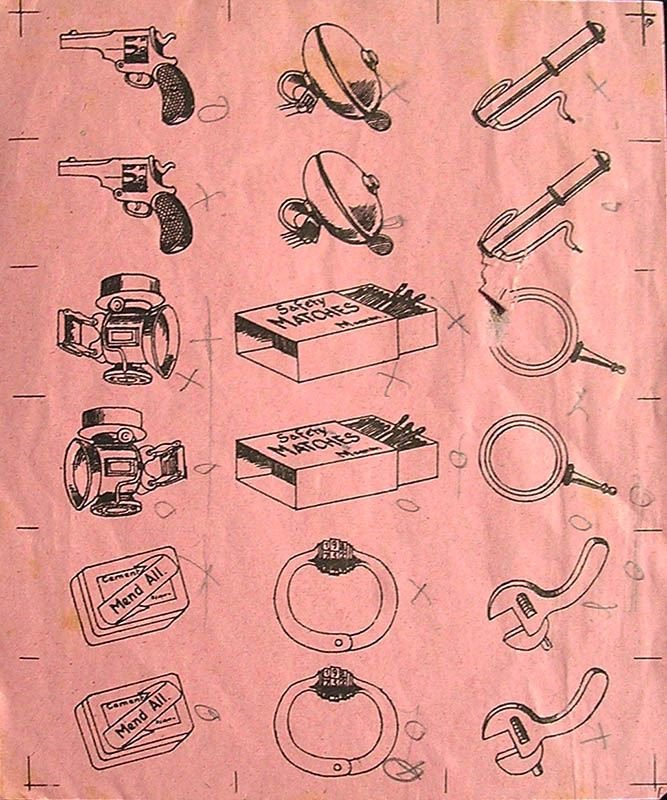 Cut-up sheet found in the "A Cycling Tour" box. There are only two symbols of each 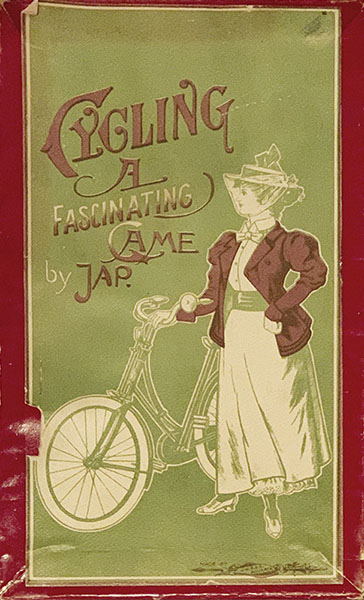 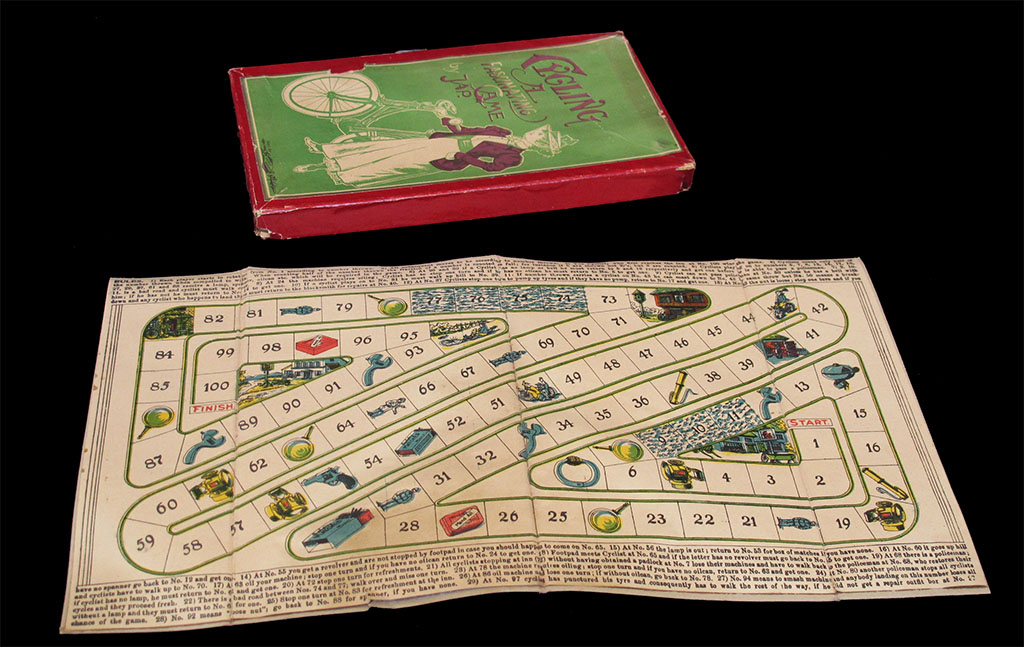 The box, as I received it, only contained the board. No separate rules, no cyclists, counters, dice, teetotum... 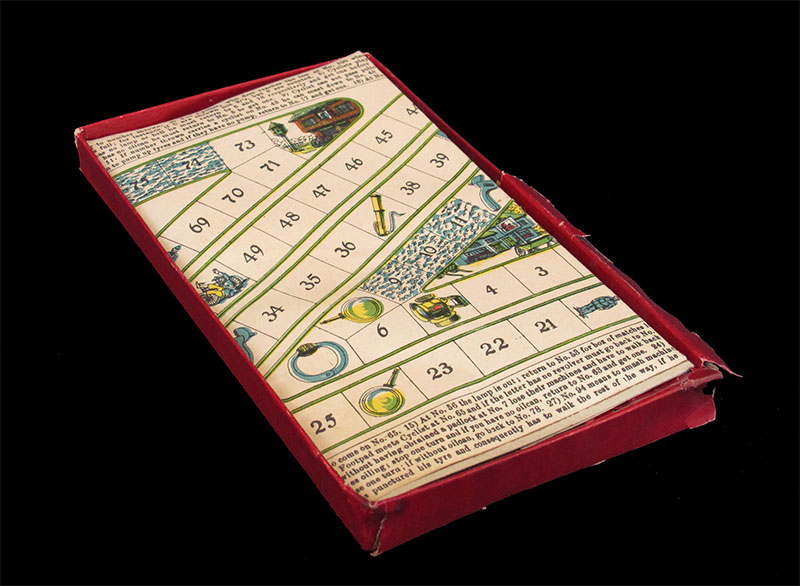 Anyway, there is not much room for anything else in the box! 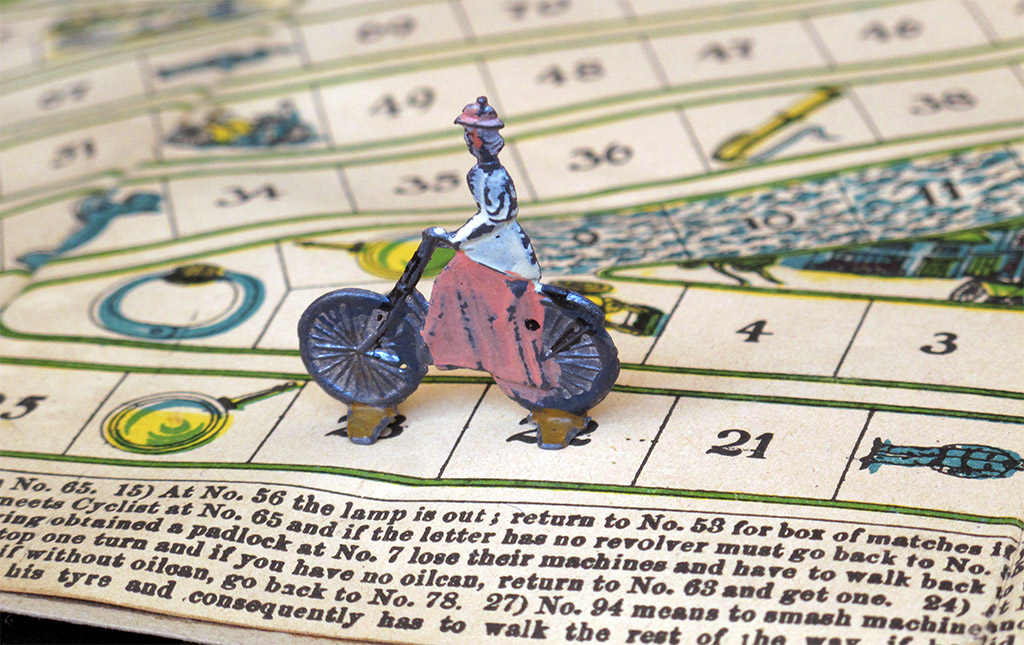 This is a cyclist from the big version on the small board. Too big, of course. 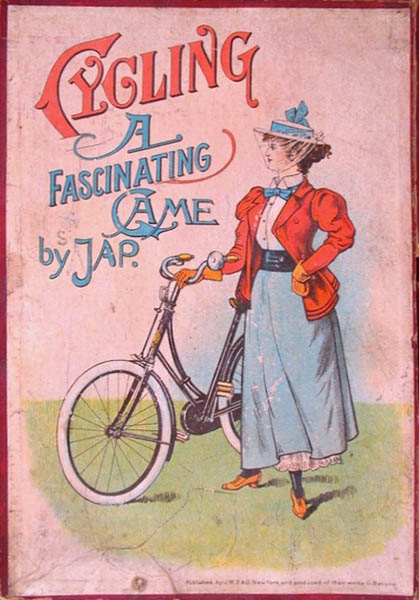 There are many editions of this game. Above is a box (from the Debby and Marty Krim collection, actually; thanks!) which, according to Bruce Whitehill, is the New York version of the game. I am not sure, but I think this box is much bigger than mine, and that the board inside is full-sized. There is also a big version of "A Cycling Tour" subtitled "A jolly Game for two or more Players" (instead of "a fascinating game"); there is a German version called "Radeln. Gesellschafts-Spiel" (I have seen it with French rules!) and at least another German version called "Radfahr-Spiel" (it used to be in the HONGs website; unfortunately the site is down). 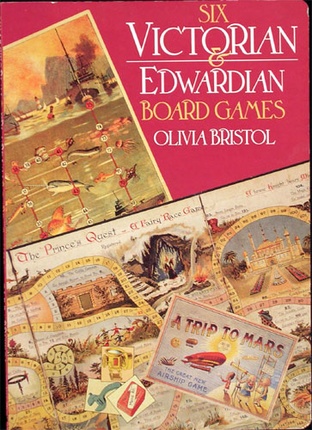 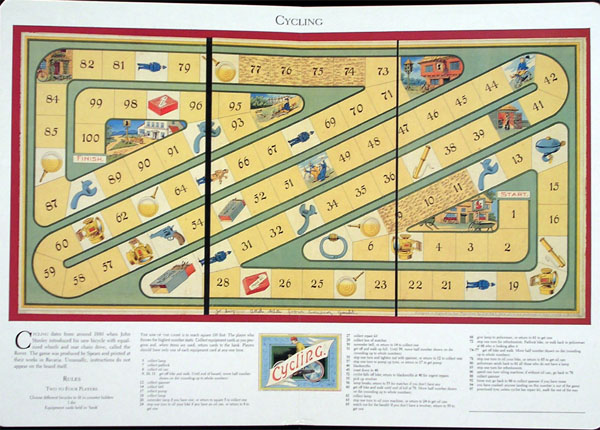 This game is reproduced (in a playable form) in Olivia Bristol's "6 Victorian and Edwardian Board Games". She says "...dates from around 1880 when John Stanley introduced his new bicycle with equal-sized wheels and rear chain drive. The game was produced by Spears and printed at their works in Bavaria. Unusually, instructions do not appear on the board itself." In the featured board you can read "Designed in England by JAP. Published by J.W. S & S. New York and produced by their works in Bavaria". With the book you get 4 cardboard riders and 36 playing cards.

On the other hand, in Helmut Schwarz and Marion Faber's "Games We Played, History Of J.W.Spears and Sons" (p.58), one reads "[...] New games appeared from 1904 onwards in the dice/board game area which took up current developments in transport technology, e.g. [...] "Radeln" (Cycling)..."

Dan Gindling ("Bicycle Collectibles with pricing guide", p.59) says "A Cycling Tour. JW Spears and Sons, London, circa 1890s [...] which came with a separate playing board, 27 playing cards, a spinner and cardboard bicycle player pieces". (Of course, he also mentions an estimated price, which I keep to myself). He adds "Other JW Spears & Sons games include Cycling, A Fascinating Game by JAP, produced in the late 1890s; the 1893 Bicycle Race game and a 1904 German game, Radeln (Cycling)".

"Spear" is one of the big names in the games world (they are the original producers of "Scrabble"). The company was founded in Bavaria by Jacob Wolf Spear in 1879, and quite soon grew to become a highly successful games manufacturer with production facilities in Germany and England since the 1880s. Bruce Whitehill emailed me a couple of years ago and told me that "Spear started in Bavaria but went to England during WWII to escape persecution of the Jews; at one point their games were marked Bavaria, England and New York. Francis Spear (the son of Spear & Son), alive but not well and living in England, sold the business a number of years ago." 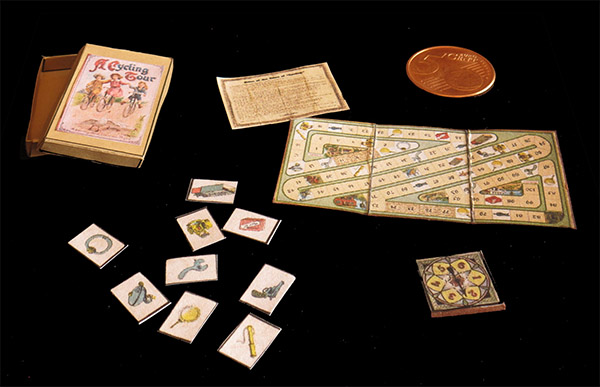 As a curiosity, this is a modern dollhouse version of the game, probably made in Spain. Quite cute, though not all details are correct (the spinner, for instance, does not belong to that game, and they forgot to include the riders). Incidentally, the rule sheet is scanned directly from the picture featured in this page (scroll up to compare), including the bits of paper that are torn, and I suspect that at least the cards are too. Of course no one asked for permission (and of course, I do not care about that).