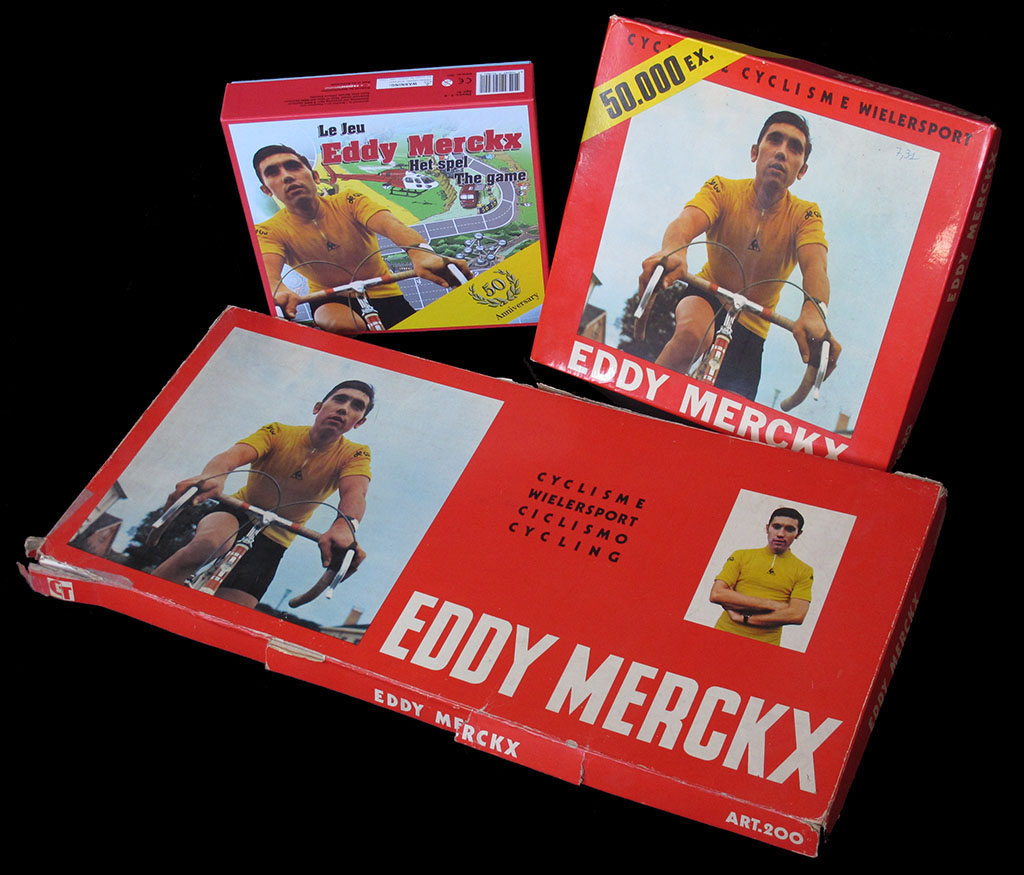 The game was originally issued in two formats (of each of which there were at least two editions).

The less expensive format came in a square box (quite big anyway: 33 x 33 cms). After a while it was reissued with the "50,000 ex." legend on it, as seen in the picture above. It had monochrome plastic riders.

The "deluxe" versions came in a bigger box (66 x 33 cms). Unfortunately, almost all those that I have seen have suffered over time from poor storage conditions. The only difference between the first and second editions of the big box was that one of them (arguably the later version) had a picture of Eddy himself playing the game inside. Both of them had painted riders (though the colours of the riders may vary from one box to another)

The board, which measured 69 x 64 cms, was basically identical in the two boxes, except that it was folded in two in the long box and folded in four in the smaller square box.

In 2019 the game has been reissued (in a smaller box) to commemorate the 50th anniversary of Eddy Merckx first Tour de France. 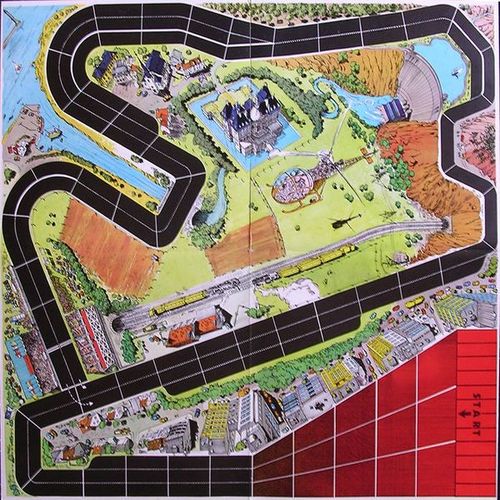 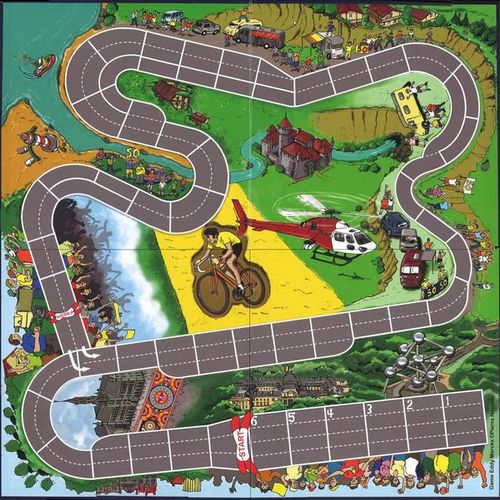 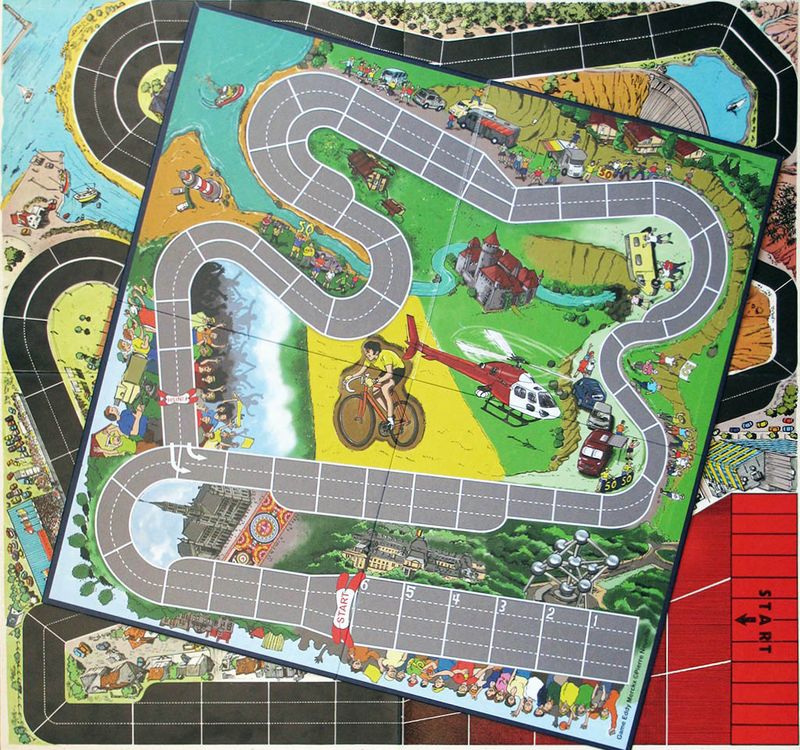 Compare the sizes of the old and new boards

This game represents a a one-day race, in which cyclists must complete three laps and a half around a circuit (not unlike the World Championship), with prices (money) at each lap. The winner is the team who got more money, not the one arriving first after the last lap. It is a regularity race.

The writer of the rules is not exactly modest: "vous avez devant vous un des jeux les plus passionants du siècle". I would not say that much, but I have always liked this game. It is a good example of a simple game which nevertheless features "cycling" rules: a rule for mountain passes, a handicap for breakaway riders, and it is one of the first games to have an aspiration rule. In this case, you may draw from the rider in front of you if you like his throw of the dice. (To prevent the possible boredom of the peloton just making a translation movement everytime the leader throws a high number,  the road gets narrower every once in a while, and a rider may only draft from another rider in the same lane. Some lanes get blocked sometimes, but the shape of the peloton keeps changing in a quite natural way). 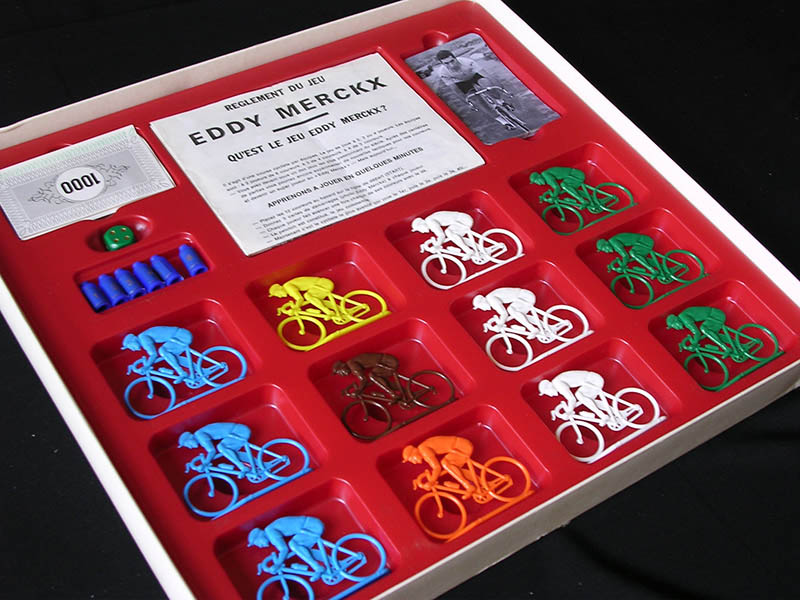 Monochrome riders in the square box.

The twelve riders are divided between 2, 4 or 4 players, that is why one of the teams features three different riders, which can be added to the other teams in a three-player game. 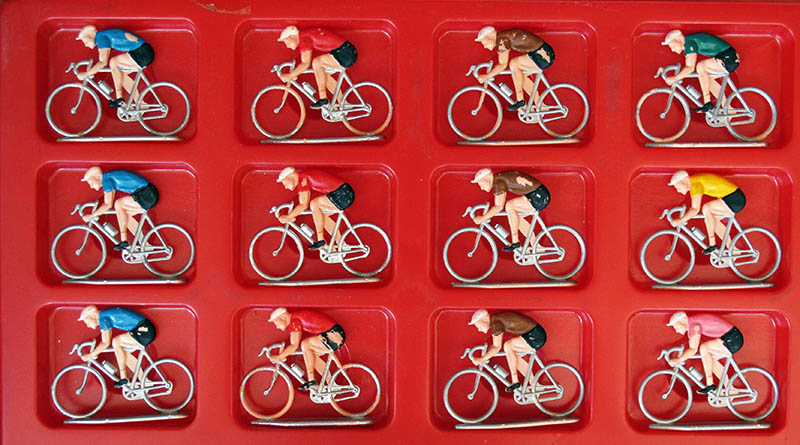 Two variations of the painted riders. 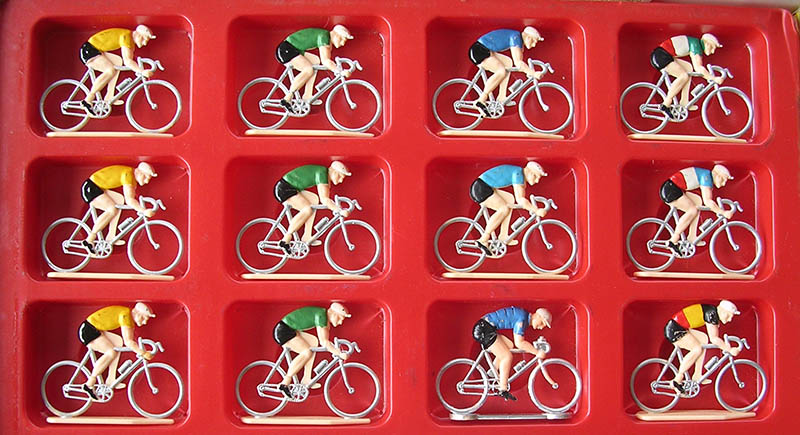 One issue with the original versions of the game is that the light cardboard game board had a tendency to bend and make the big (6 cm!) riders frustratingly unstable. That was worse with the square box, since the board was folded in four, but it also happened with the long box. The makers of the game must have noticed it, since additional orthopedic plastic stands were provided with the game.

Fortunately, the problem has been solved in the 50th anniversary version of the game, which features smaller riders and, more important, a sturdiest board. 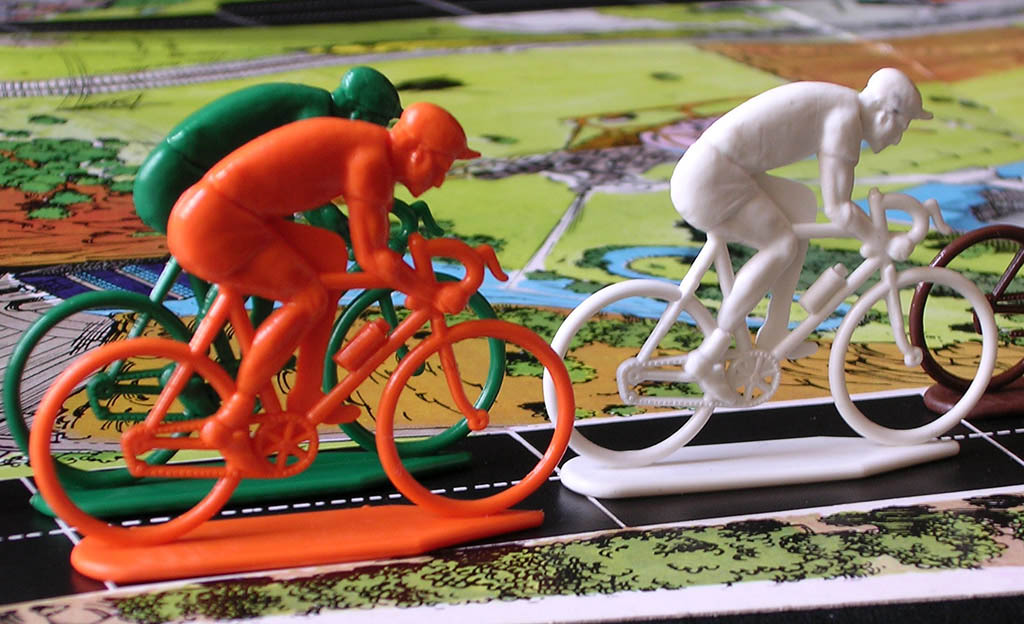 Although unstable, even the monochorome riders were not that bad after all 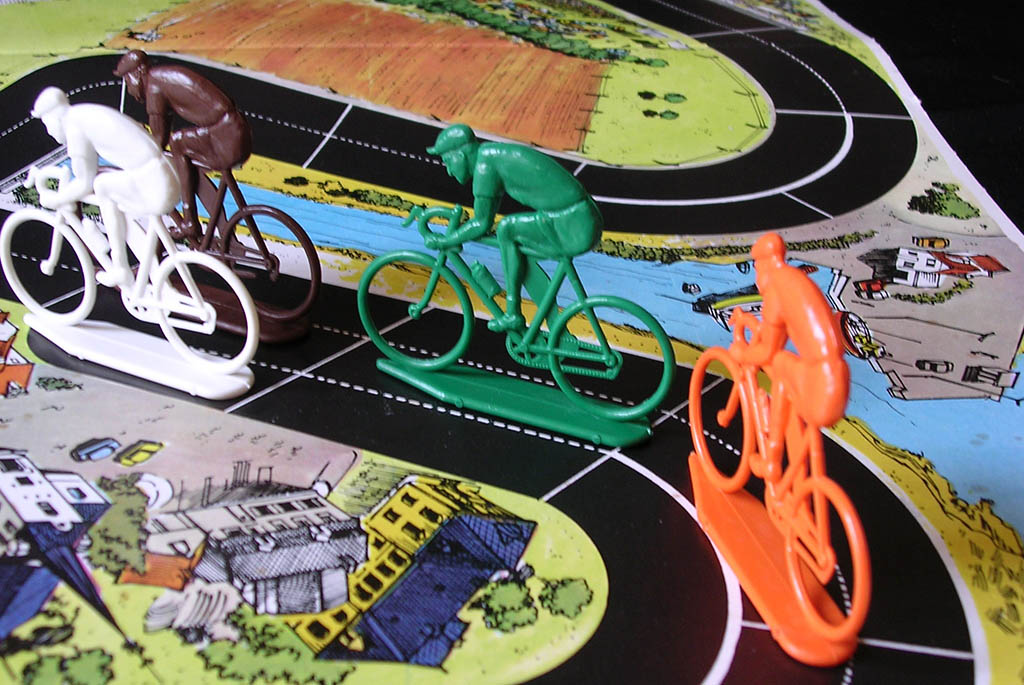 But of course the painted riders were much nicer

Here is the complete peloton 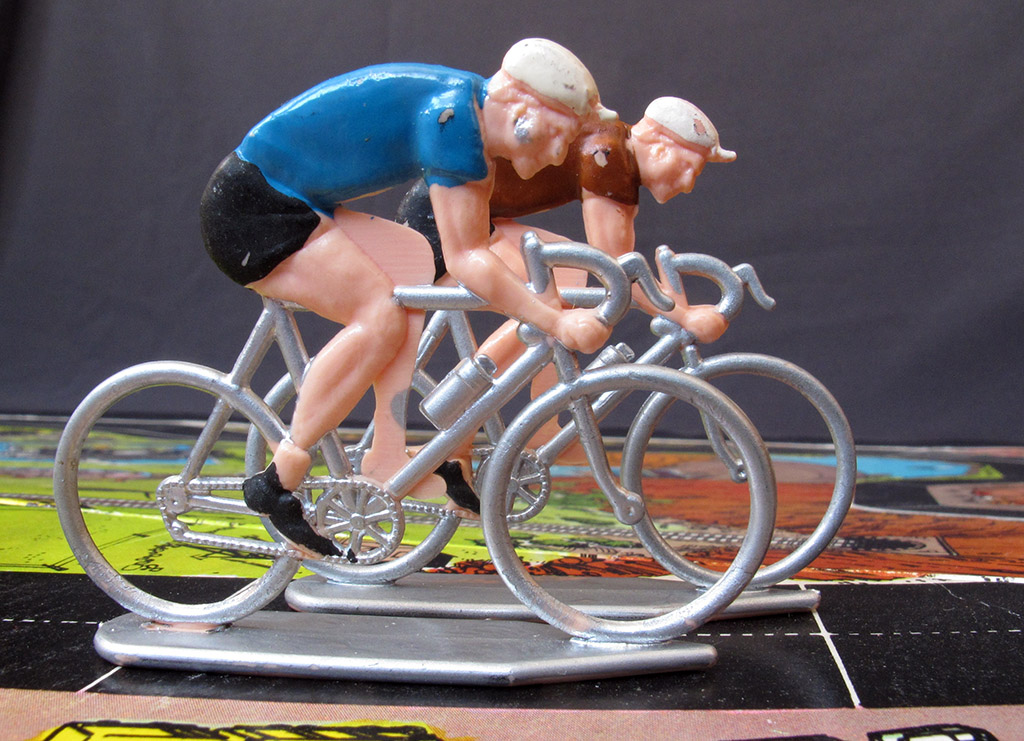 Have a close look at them. 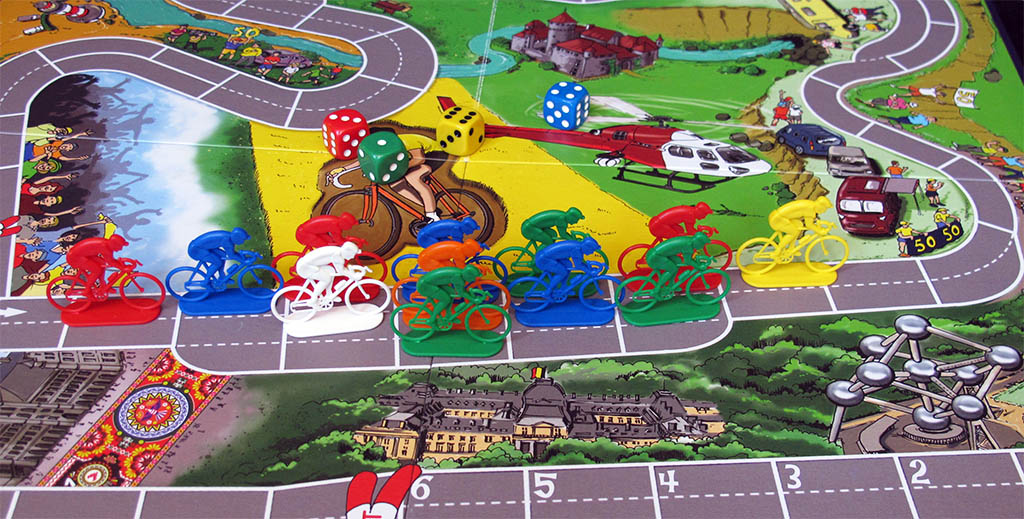 The modern edition looks, well, like a modern game 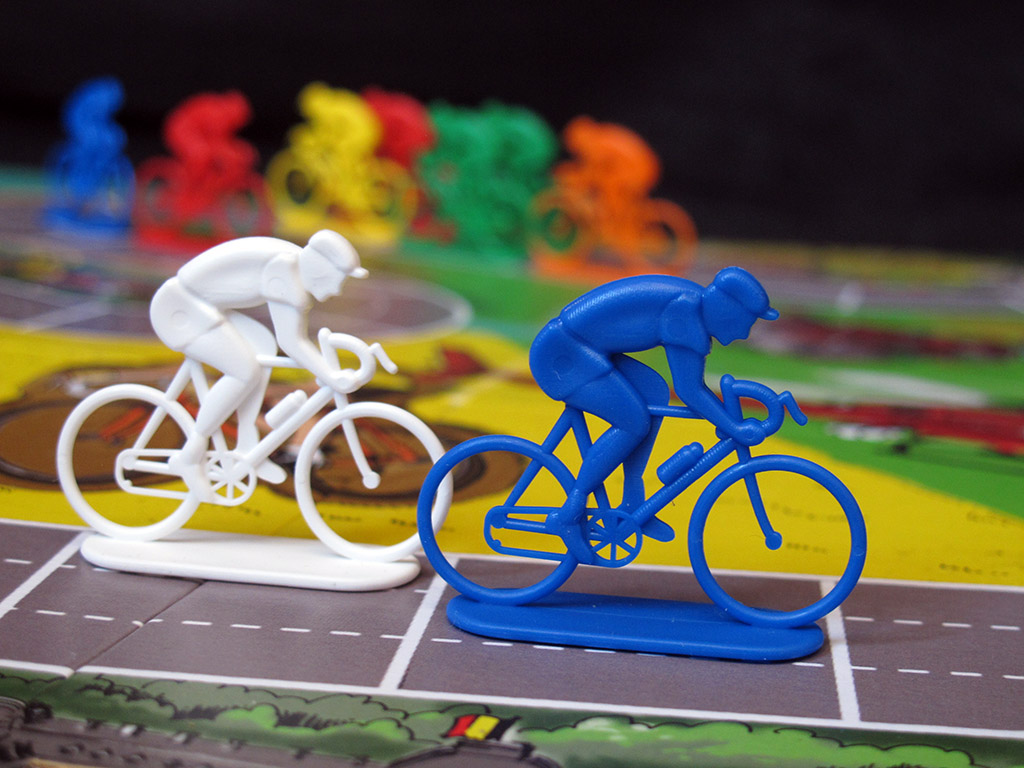 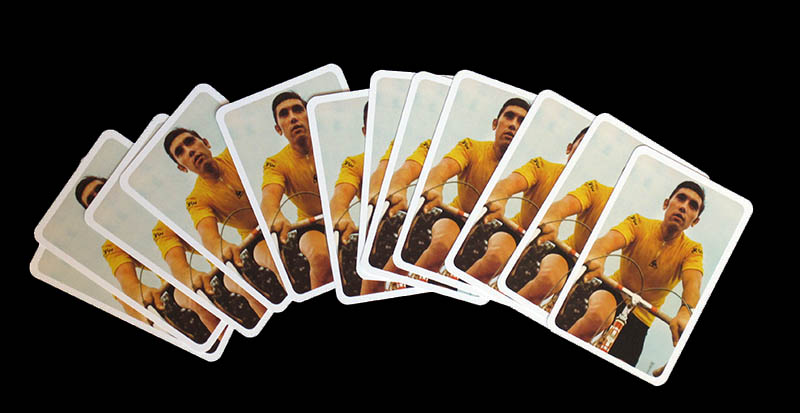 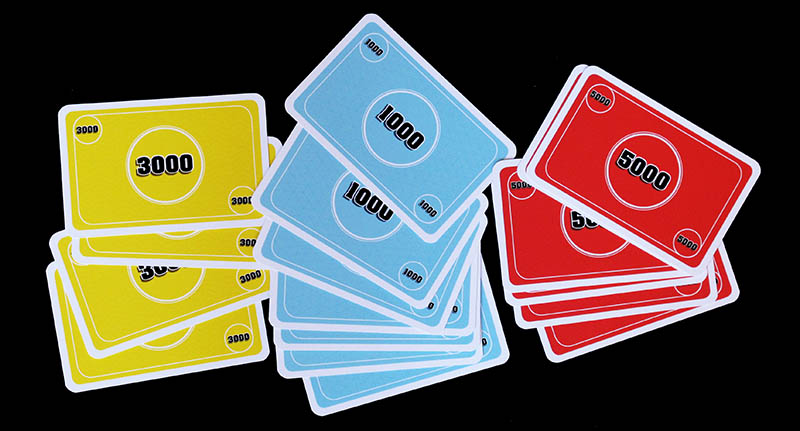 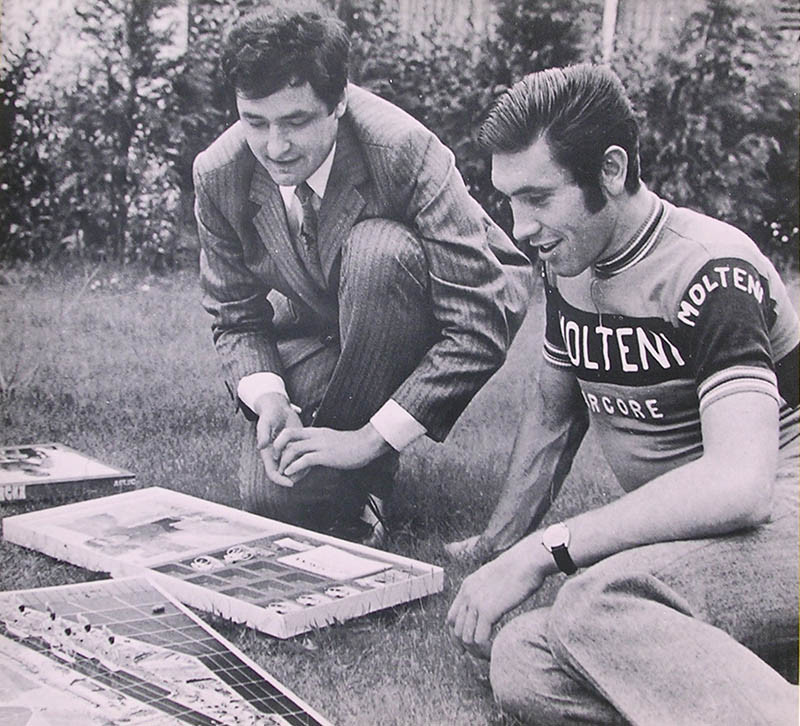 The famous picture of Eddy Merckx himself playing the game has been used in the 2019 edition too! 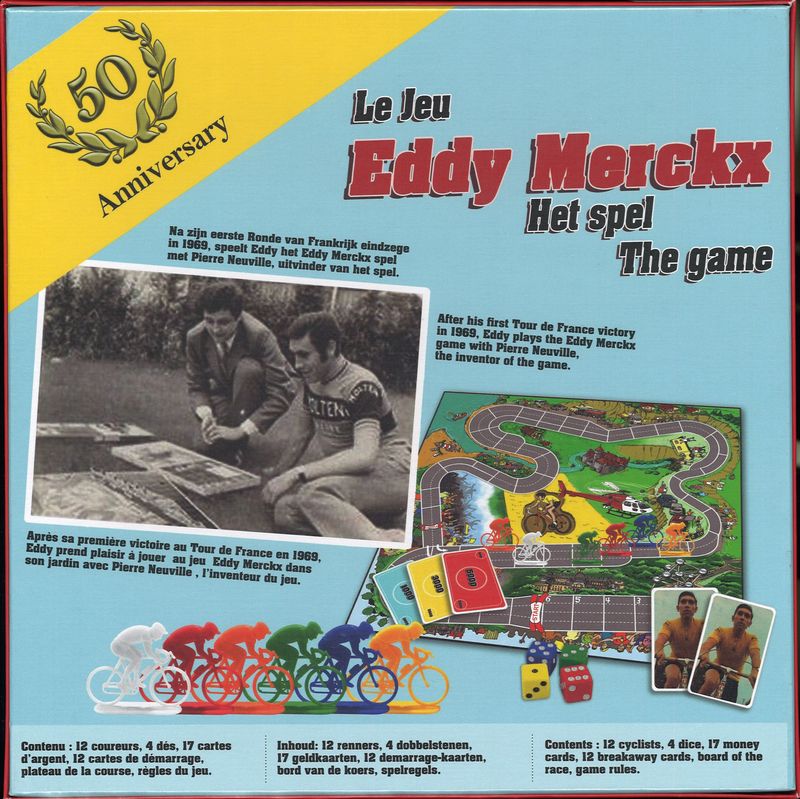 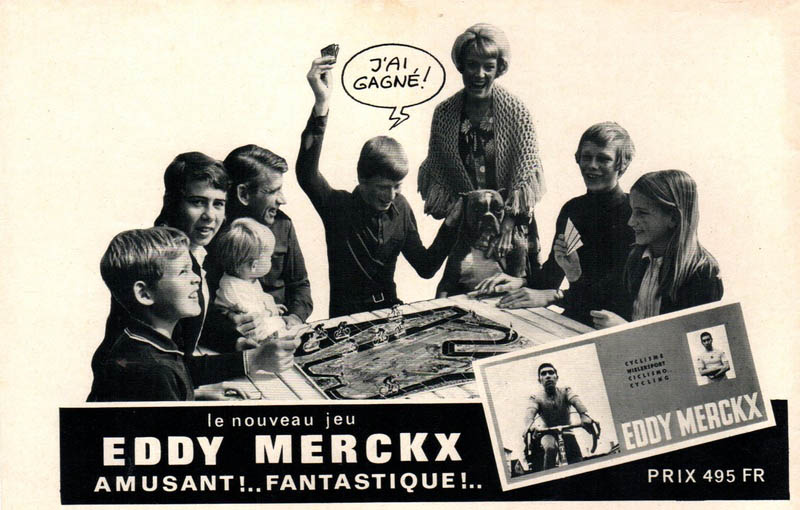 Didier Maria found this ad in Belgian Tintin magazine, issue nº 46, from November 11th, 1971.  With this information, the magazine being from the end of the year, and the sentence "le nouveau jeu",  I think the game can be safely dated as being released in the year 1971 (of which I was not previously sure). Its nice to have friends with such knowledge and resources.