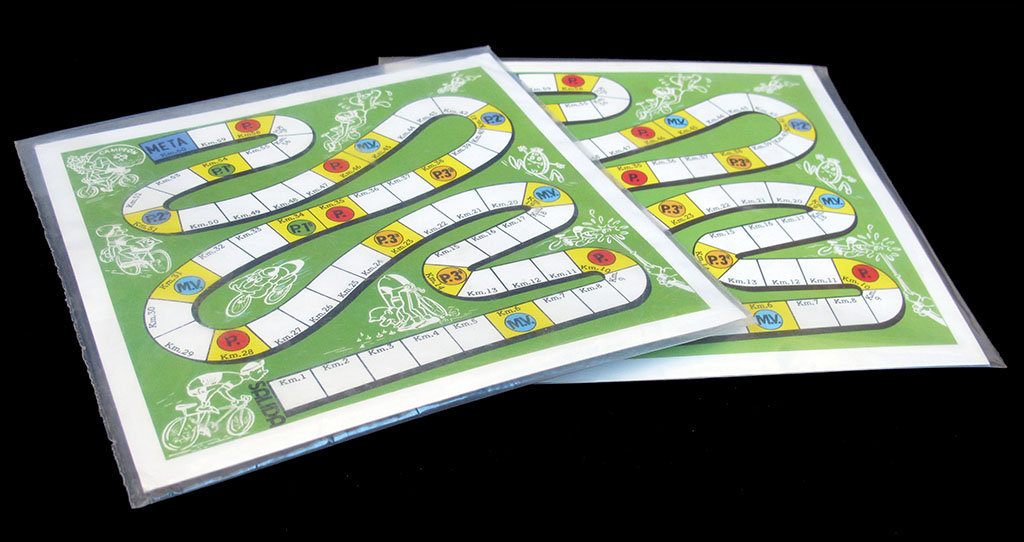 This game (24 x 24 cms) is part of a collection of cheap games that were sold independently in Spanish bazaars. The game consists of a small (24 x 24 cms) board made of light cardboard, a set of cheapo counters and one die.

By the way, Fher is a publisher from Bilbao, founded in 1937 and still active, specialised in products for children and young people. They published a number of cycling trading card albums from the 1950s to the 1980s. 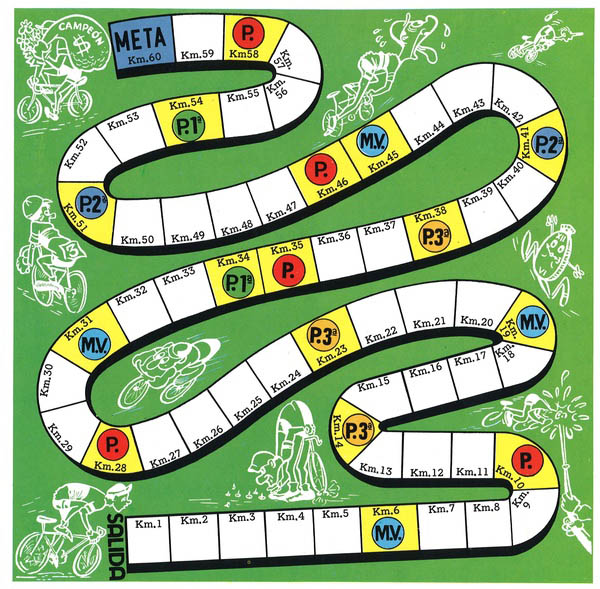 The rules are printed on the back of the board, along with the list of games in the collection. 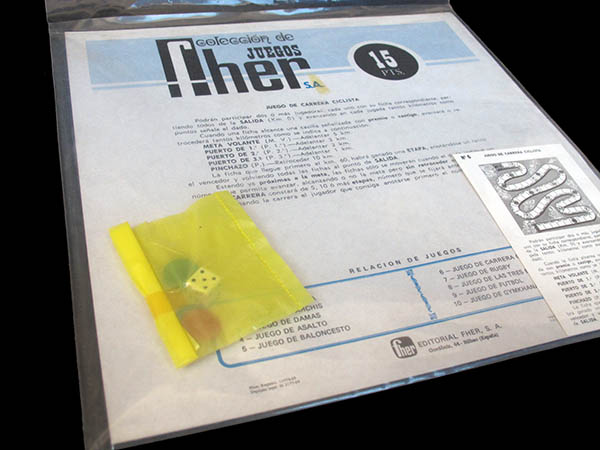 Since you cannot check the rules while you are playing, a rules' sheet is included too. 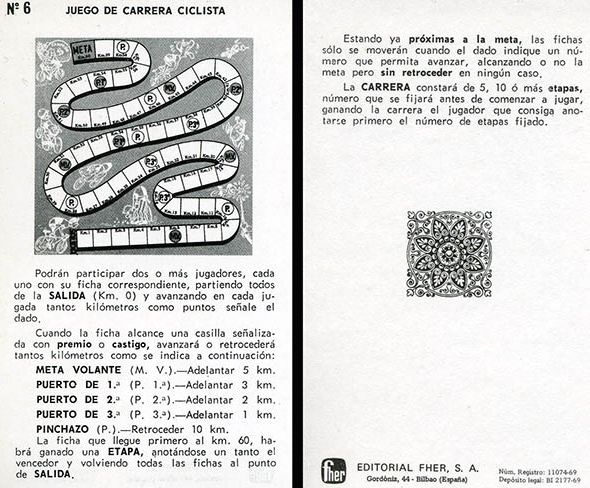 As could be expected, it is a simple roll'n'move game. The race incidents are either bad (puncture, go back 10 kms, that is, 10 squares) or good (intermediate sprints -"M.V". for "meta volante" in Spanish- and mountain passes where you advance 5, 3, 2 or 1 squares). The finish line has to be reached by an exact throw, but there is not goose-like reverse movement for overthrows.

The rules also say that one point is awarded to the winner, and that the complete game is to be played over 5, 10 or more stages 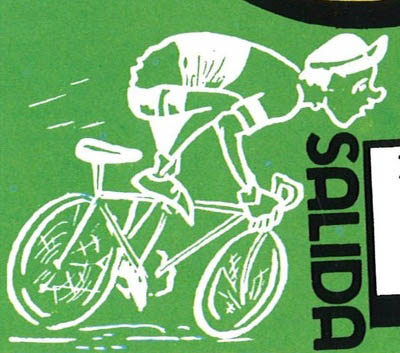 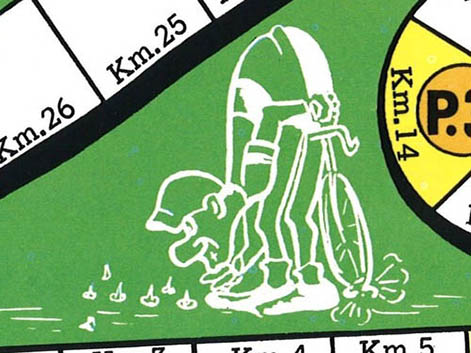 I have recently discovered that there were two editions of this game with different backs. I do not know which was made first. Both of them have the same register number and date, and were sold at the same price. However, the address of the publisher changes, although the address of the printing facilities does not. 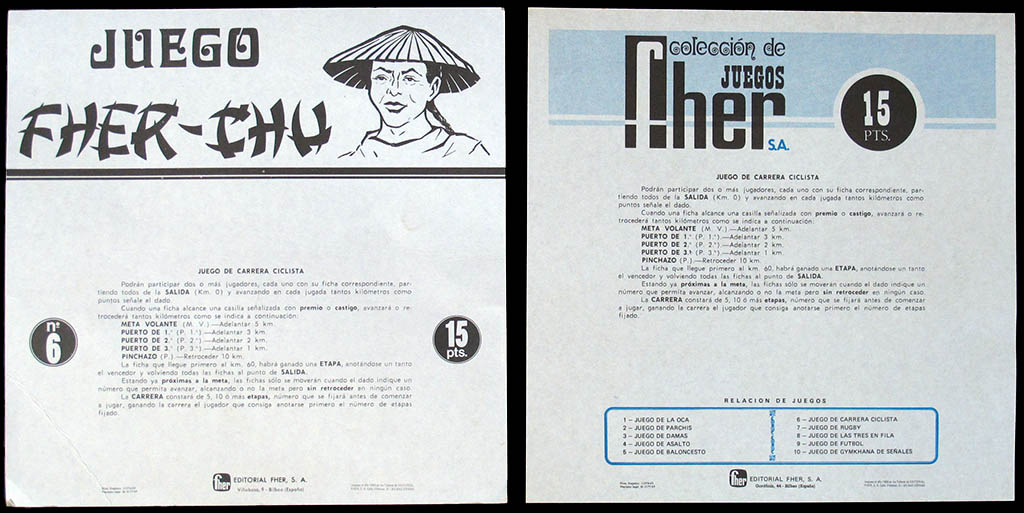 The game on the left features the portrait of a Chinese person and Chinese-inspired lettering referring to the collection as Fher-Chu. The list of the games in the collection is not there and, what is worse, the rules sheet is neither. I am afraid this is not a case of the rule sheet missing in my game. I have some other games in this collection and that is the case for all of them. In this game the address of the publisher is Villabaso 9, the same address where the game was printed.

On the game on the right (also pictured above) the game is said to belong to the "Colecciˇn of juegos Fher". In it we find the list of the games in the collection and the address of the publisher is Gordˇniz 44 while the game was printed in Villabaso 9 (both of them are addresses in Bilbao).

I have checked some Fher trading card albums from the 1970s and the only address I have found is Villabaso 9, but I also have found some later references to the Gordˇniz address. I wonder if Fher moved its headquarters from Gordoniz to Villabaso or the other way round. In the first case the Chinese-style game would be the second edition,  which would imply that the rule sheet was dropped from the games.

Of course, futher investigation would be needed to be sure, but my guess is that this is not the case, that the Chinese-style edition came first and that the rule sheed was added to the second edition of the game. 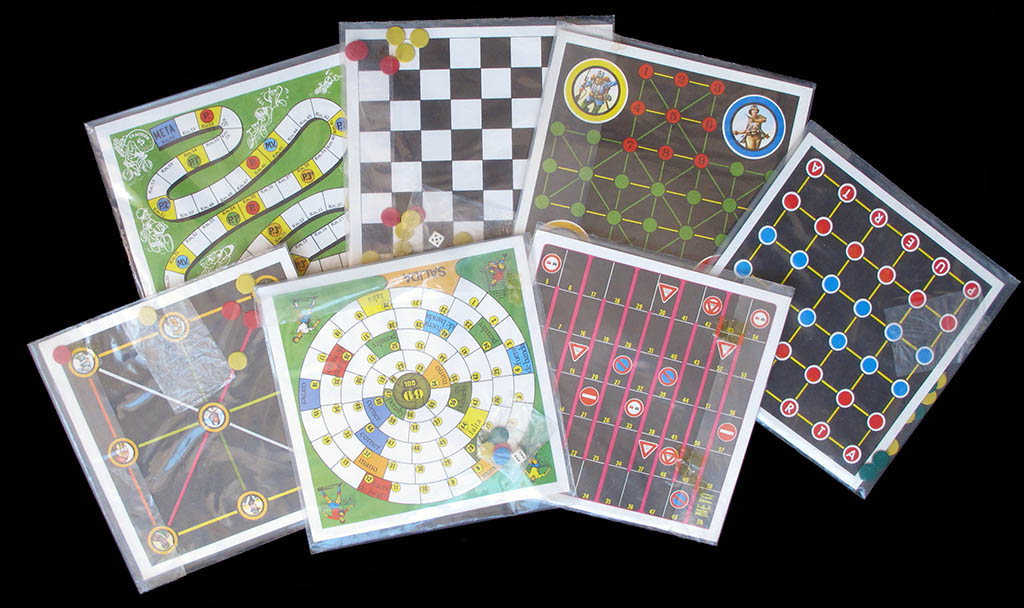 A selection of games of the same collection, both series mixed. They are indistinguishable unless you flip them over.