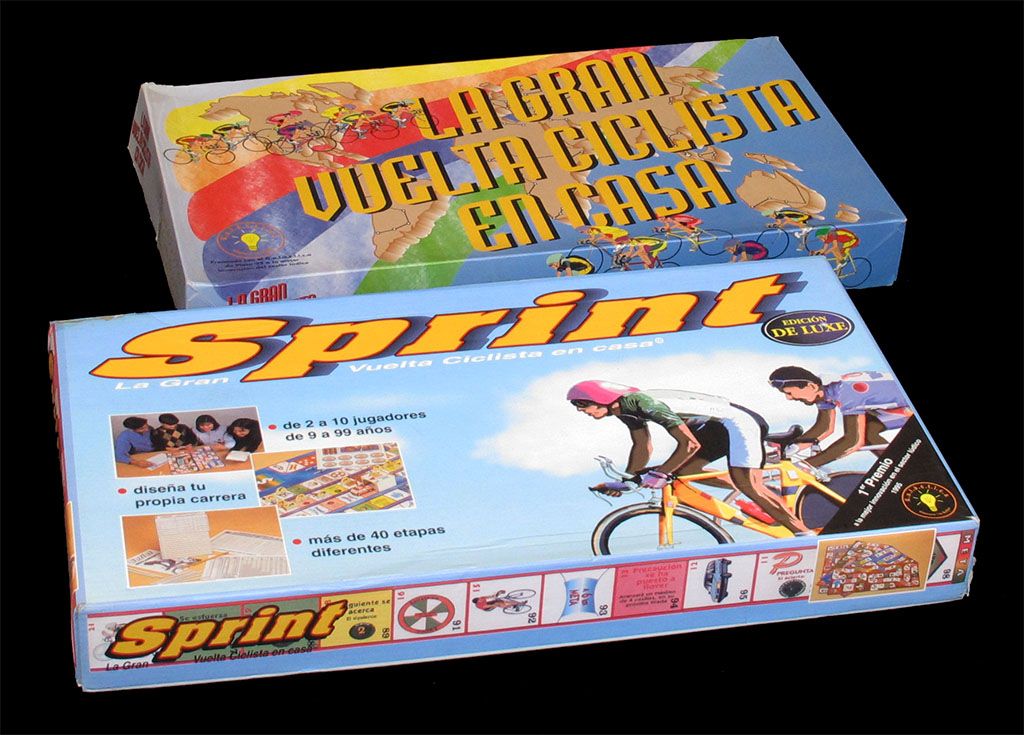 Another independent unbranded Spanish game. All these games, of course, are very scarce, though some of them are quite expensively produced, like this one that includes 4 two-sided boards and lots of extras. There were even two versions of it. The one titled "Sprint" is supposed to be a "De Luxe edition". It is quite so, with a sturdier box and boards, though most of the contents inside are identical. Both boxes are the same size (46 x 24 x 5.5 cms) 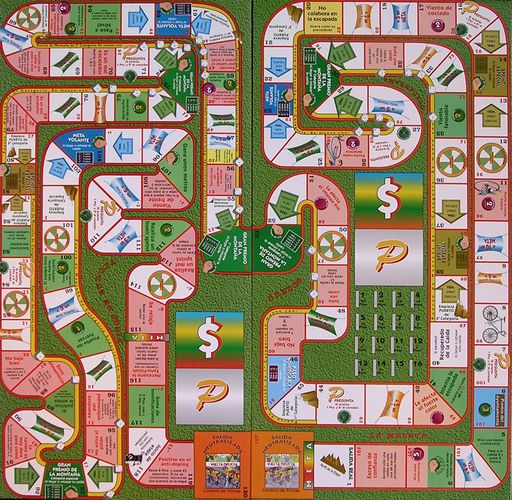 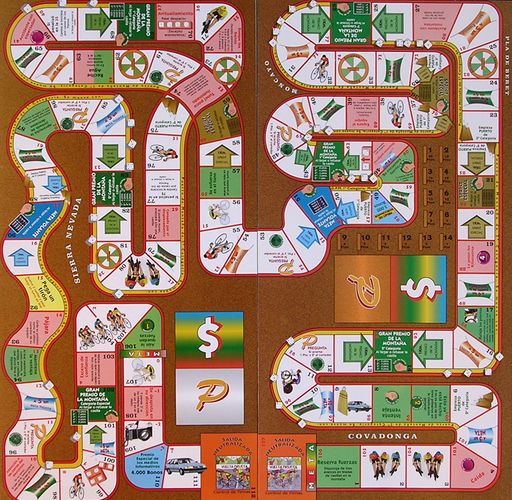 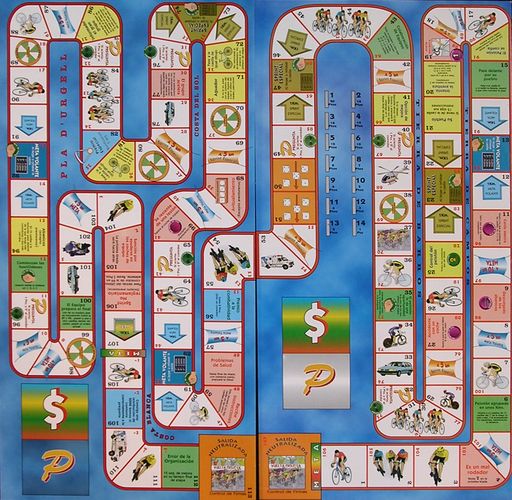 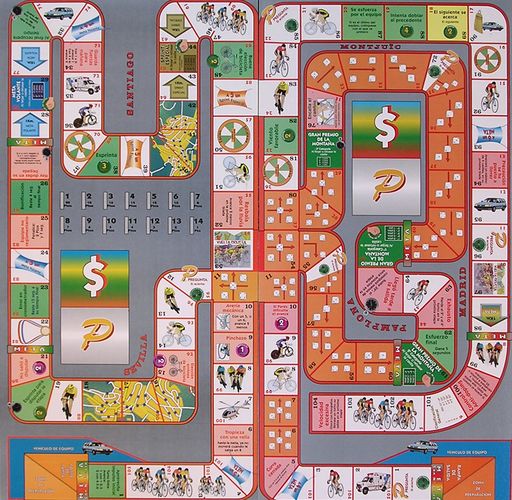 The boards can be combined in different ways. It is not compulsory that the background colours (which indicate the type of road) match, except for the grey one, which is used in time trials. 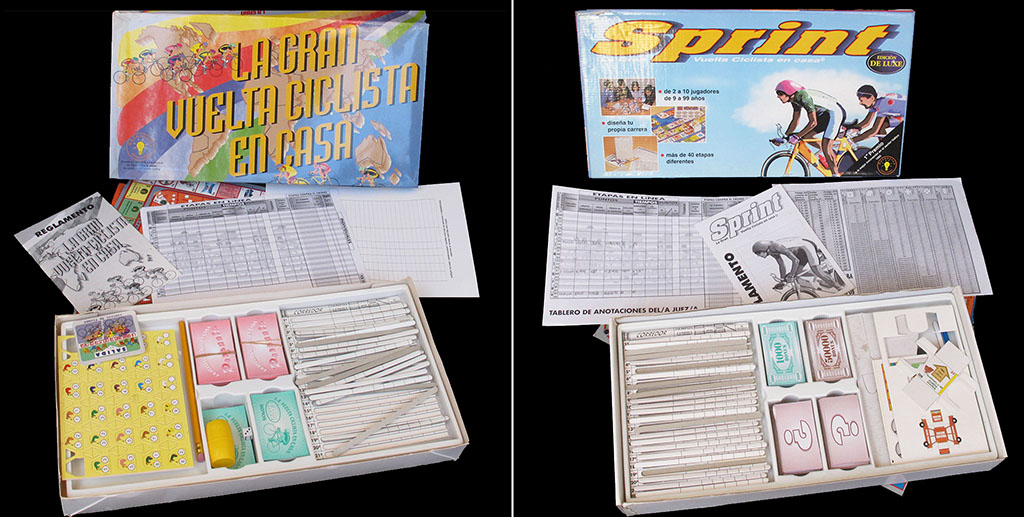 The contents of the boxes are almost identical (except that the boards in the "Sprint" version are thicker) but there are intriguing differences, starting with the rules booklet which has been rewritten and for the "Sprint" version. In fact this is one of the few clues that make me think that that this version is the second one. ANother clue is that it the "De Luxe" mark: it would not make much sense to mark the first version of the game as "De Luxe edition" and THEN release a cheapo version.

On the other hand, until I had both editions of the games in my hand, I thought that "Sprint" could have been the first version and that the name could have been changed since there was a previous Spanish game also called Sprint.

However, the contents of the "De Luxe" box are not always of better quality than those of the other version of the game. 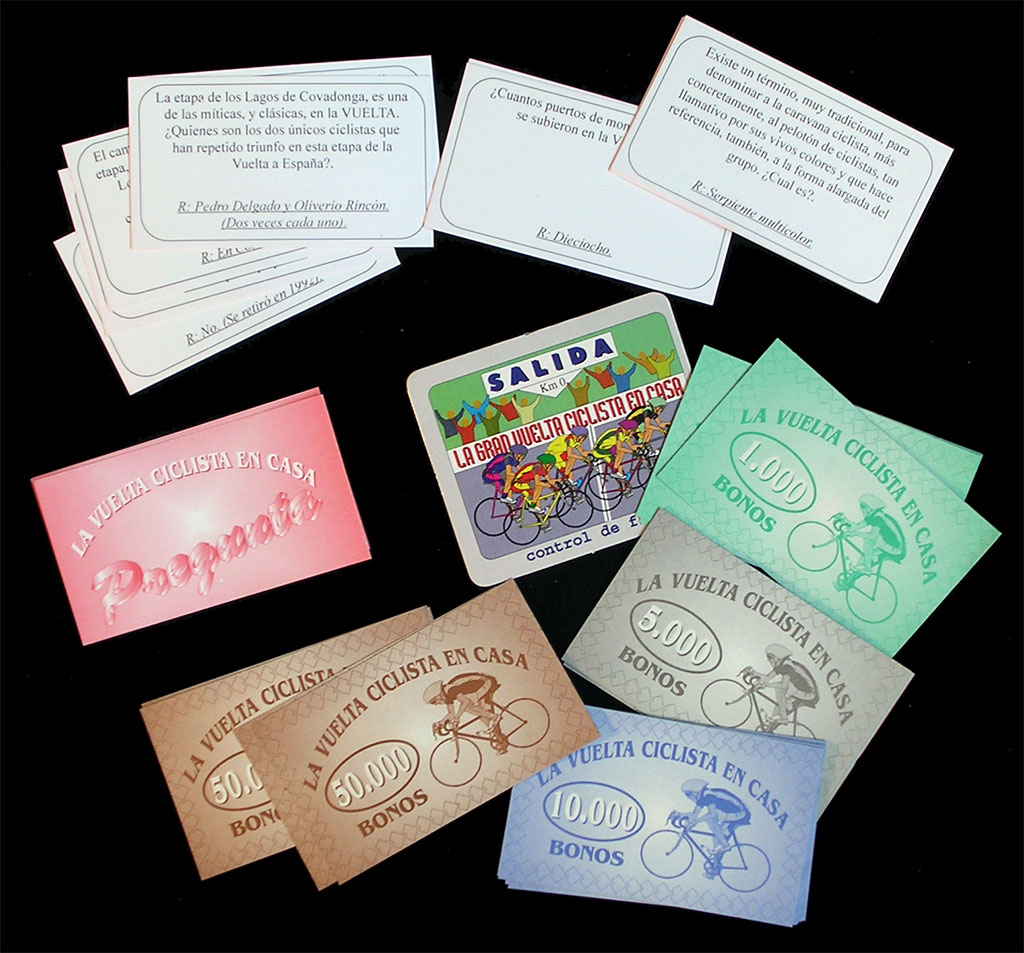 These are the question cards and money of the "first" box. The nice but useless cardboard card call "control de firmas" is identical in both versions of the game. 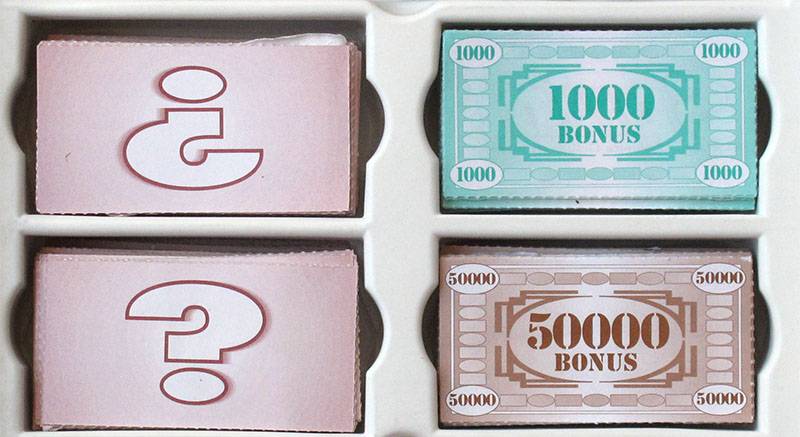 Here are the question cards and money of the "De Luxe" edition. Well... 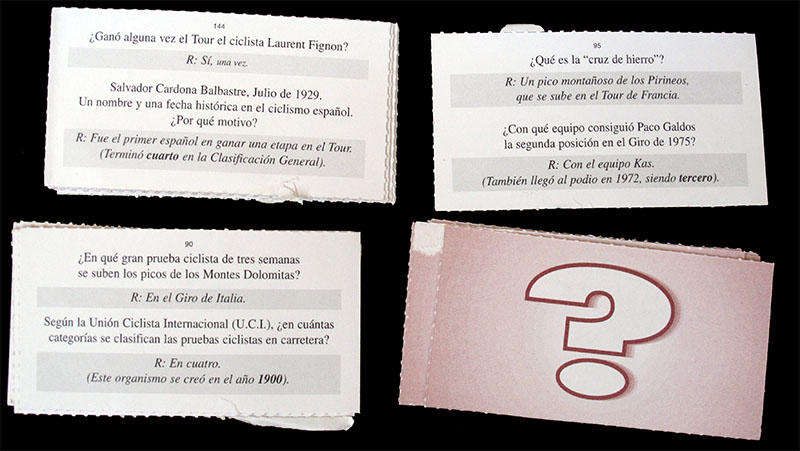 By the way, the question cards have been rewritten. Now there are two questions in each card. 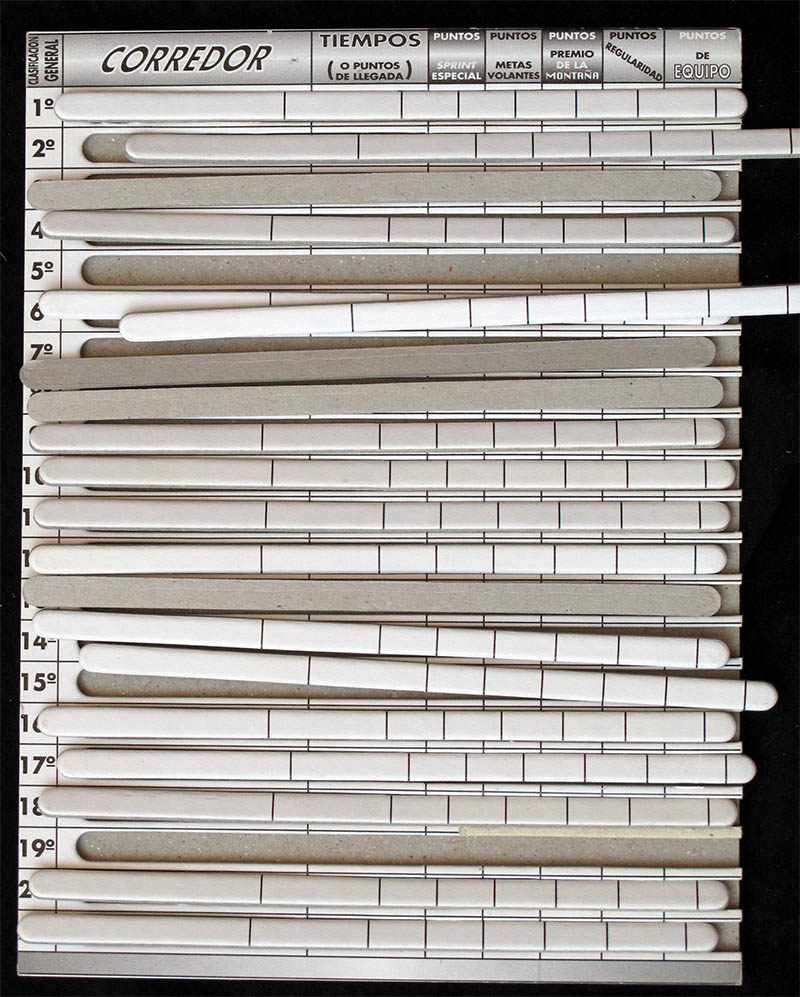 This implement is supposed to help keep the classifications. A nice try, but a failed one. It does not help at all. In fact it is a nuisance. 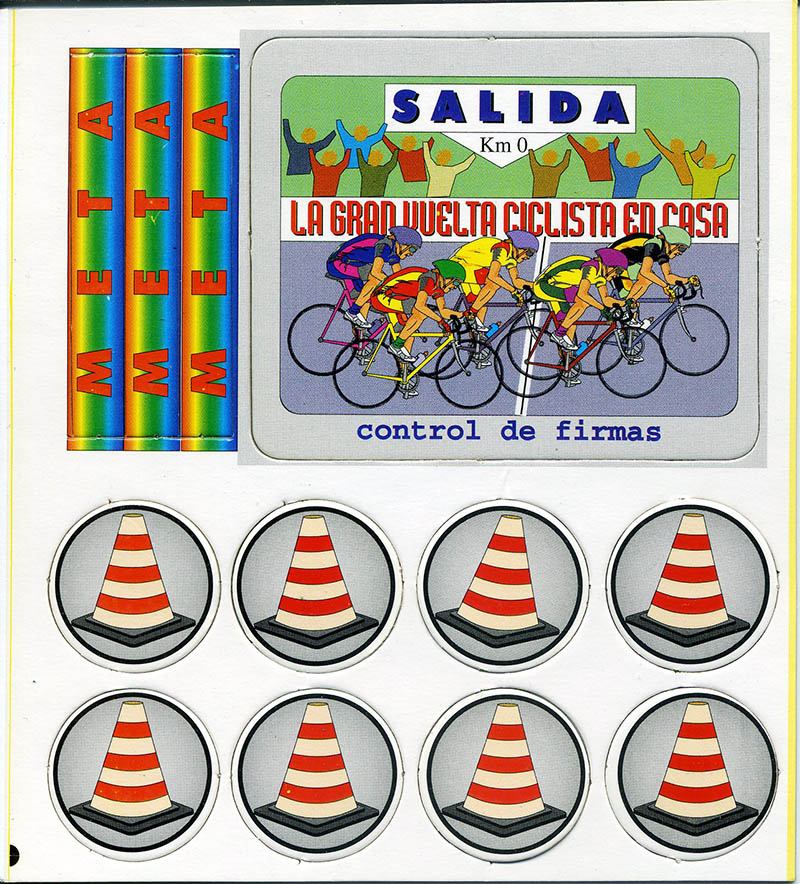 Here are some other elements of the game. As I mentioned above, the firm control card is useless. It is just there for the ambience. 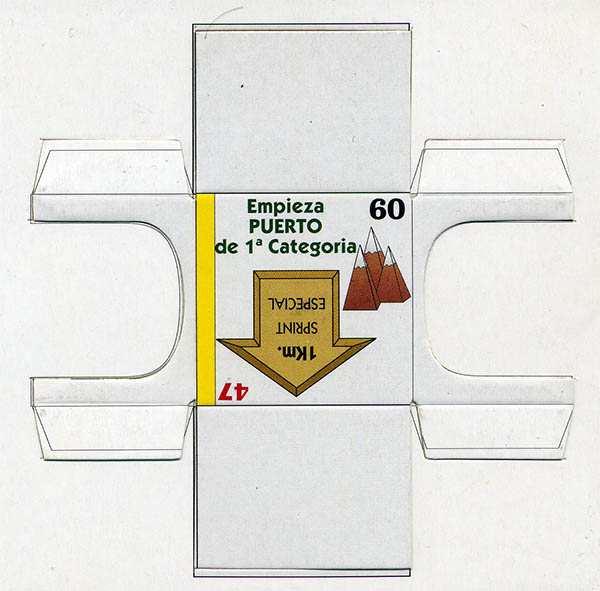 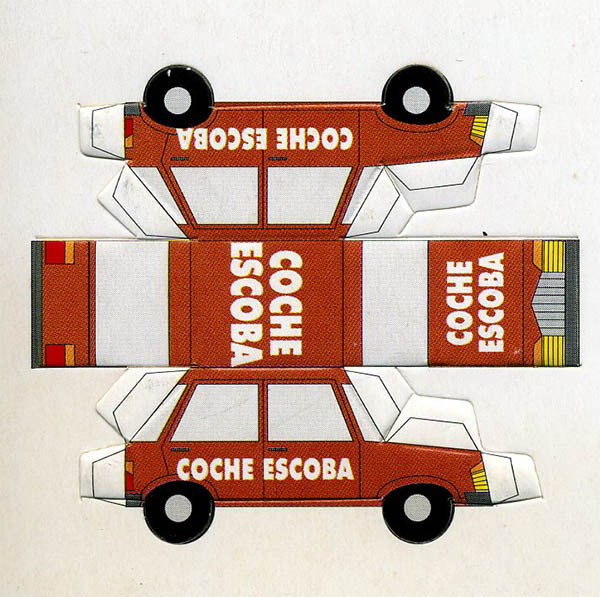 Needless to say, I have nothing against ambiance elements in games.

With all these elements and others that I do not display here (in the booklet there are examples of how to set up different stages), this game is deceptively simple (not to say silly). The rules can basically be summarized as:

- roll one die,
- move your rider
- follow the instructions on the board if any
- if you fall on a question square, draw one question card and try to answer
- when the stage is over, fill up a lot of boring classification sheets while you pretend you are enjoying yourself
- play next stage

I wonder how many people have ever played the second stage. 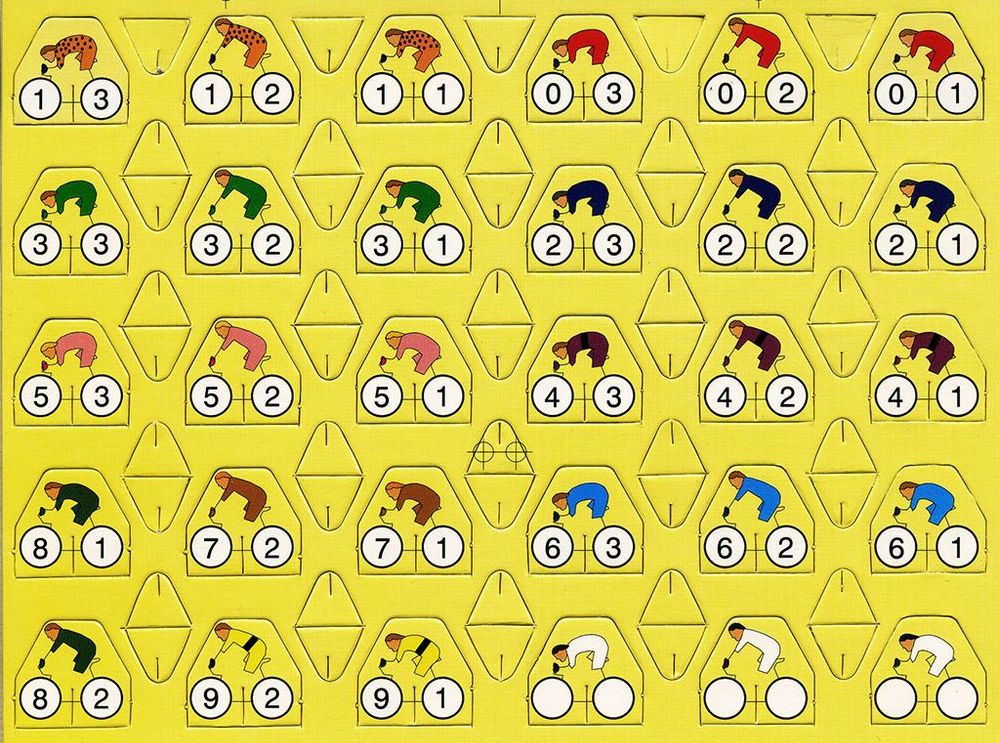 Here is the complete set of of riders, complete with three blank replacements. By the way, the numbers on the wheels are just to identify the riders.
First number is the team's, second number is the rider's number within the team. 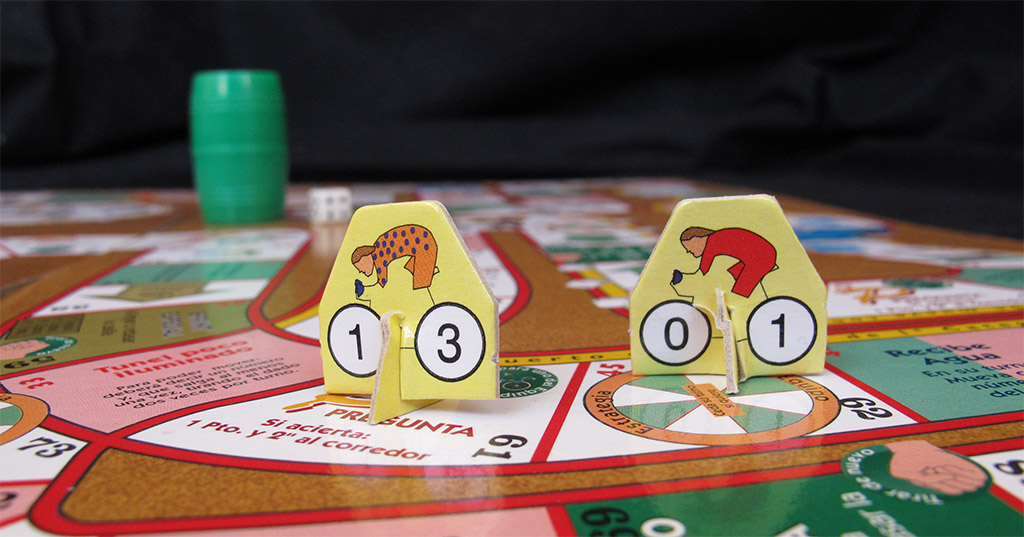 On the board they do not look so bad. 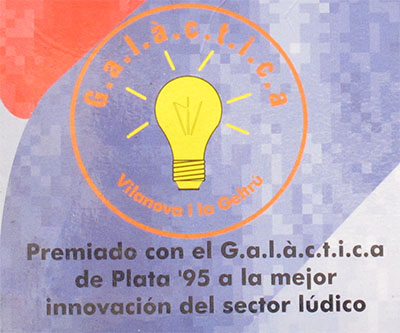 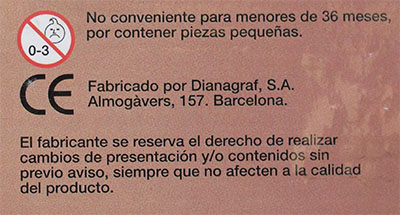 The "Sprint" version of the game has a mention of the maker. However, I think this is just the printer, not the editor.