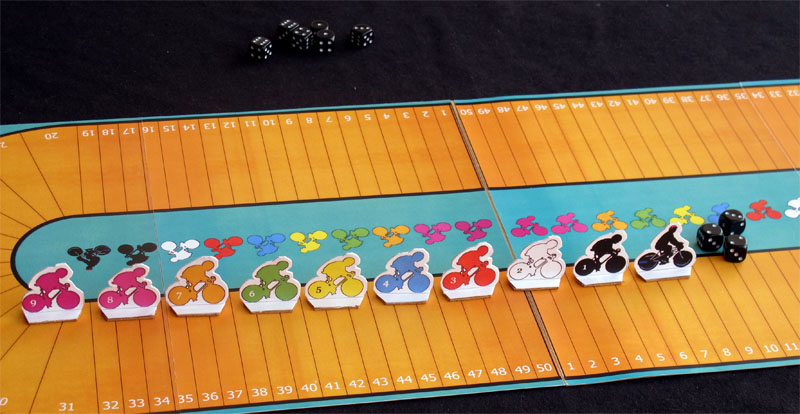 This game can be considered is a one-player non-strategy game. You just throw the dice and watch the race. It can also be considered just the set of rules for the final sprint in a bigger game. Why not? You can use it if you want. But what it really is, is a betting game, like real Keirin, at least in Japan, is a betting event. Below are some probabilities. You might argue that the chances are not even between the riders. I admit they are not, and I advise you NOT to bet a fortune on this game (or on any other).

I created this game a few years ago. It was supposed to be a prin't and play game, but there was not much to print. In 2012 I have decided to make a real prin'n'play game out of it.

The main differences are:

a) There are 9 racers now, like real in keirin races, instead of six. However, for a shorter game, you can drop some riders (the ones with the highest numbers). Playing with 6, 7 or 8 riders is ok.

b) You do not need a lot of different coloured dice. You just need as many dice as racers, that is, nine dice.

c) The motorbike now takes part in the game, even if it's just in the first turn. It is not there "just for the ambiance" anymore.  The rule foir the first throw of rider 1 has also changed.

The rest of the rules have not changed.

After the first throw, rider 1 (R1) slipstreams from the derny and has a small advantage. 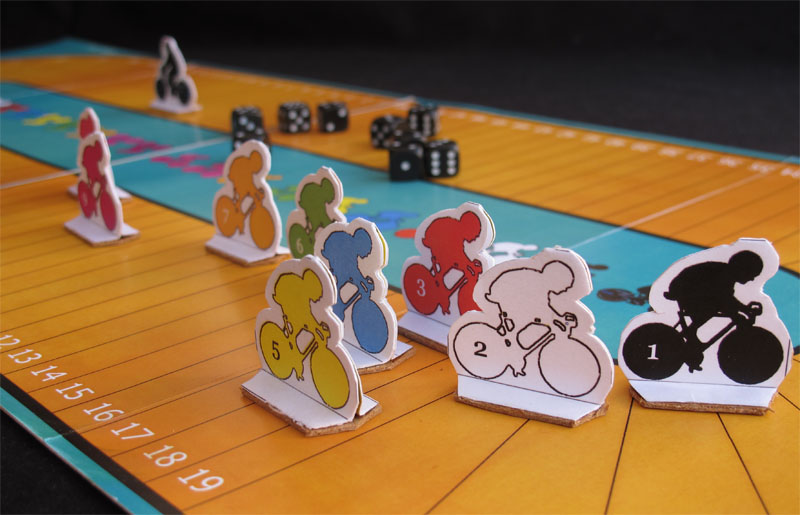 Entering the curve: R1 still in the lead. R5 has alreadyovertaken a R3 and R4. 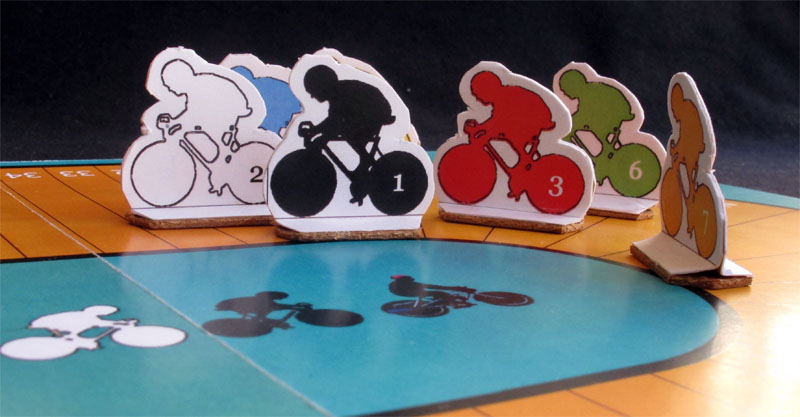 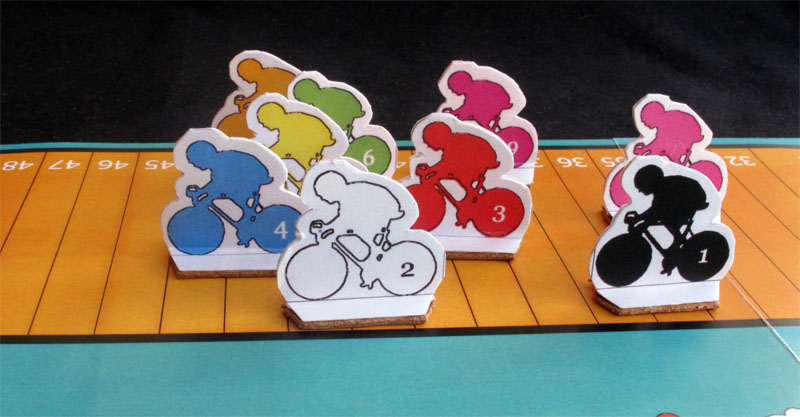 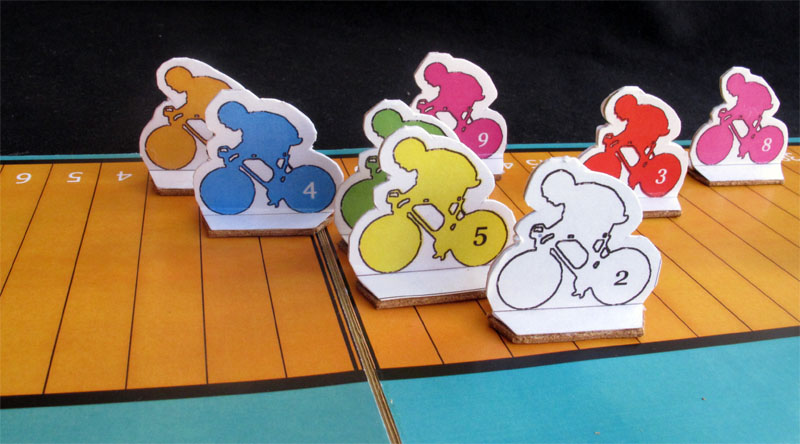 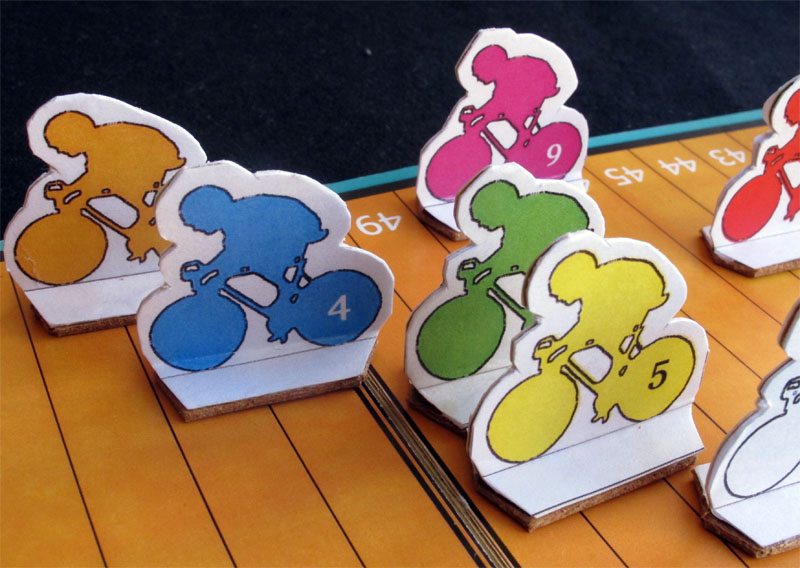 The sprint under a different angle

Click here to see a complete example race. (This example was made for the 2006 version of the game. There are just six riders, and no derny) 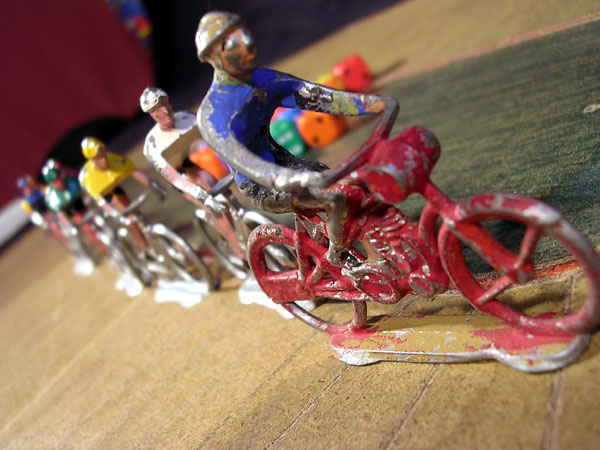 This is what the game used to look like.
Click here to see more pictures and read how I made it.

As you can see, in an average race, R1 should lead  during the eight first turns, in which he advances 35 squares, and then he is overtaken by the other riders. If the derny has thrown three sixes, R1, starting the race at 35 squares from the finish line, has good chances to win the race. On the other hand, if the derny throws three ones and leaves R1 at 50 squares from the finish, the race shouldl be close between riders 2 to 6, while R1 should be behind.

Of course, this is just theory, since half of the riders will thow above average and half will throw below (ar at leas that is what theory says...)

By the way, the average throw of the derny is 10.5, which means that the average race will start with the rider at 40 or 41 fields from the finish, the race will last an average of 10 turns, and it will be real close between all the riders.

PS: I made the calculations in 2006 when the game was meant to be for six riders. I leave the calculations of the other three riders for you. They are not really diffucult, but quite long! If you make them, please send them.  ;-) All I can add is that R7 is quite strong, while R8 and R9 generally need a longer race to win. Increrase the race lenght to one full lap (100 squares) and they will win 90 % of the races between them.