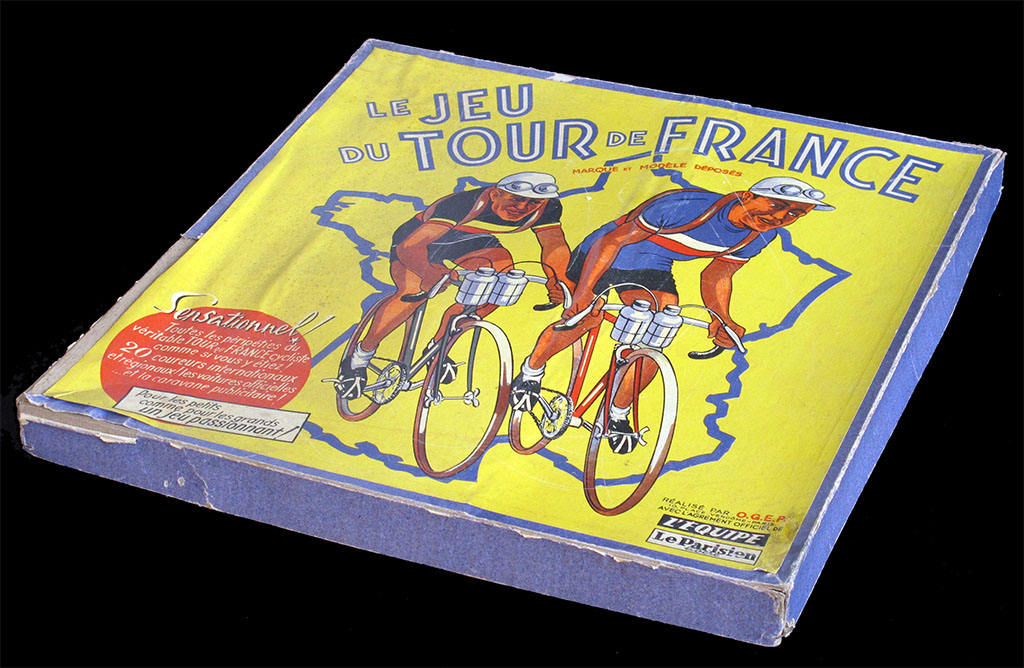 This is one of the games that has taken care of the Tour de France ambiance with more detail, and therefore is quite sought after (quite expensive too, if found in good condition). Until now I just had been able to purchase half of the original elements: I had an original board, rules, the eight cars and even an original die.

Fortunately my friend François has a very rare uncut copy of the game (in an unusual blue box, see below) and I had been able to reconstruct the missing elements (the 20 riders, Bourvil, Miss Tour de France and the banner, apart from the second die), so I somehow had a complete game that did not look too bad.

UPDATE December 2019: I finally have a complete copy of the game. Some of the pictures below, though, feature the remade riders. It is easy to spot which they are, and they do not look too bad, do they?

By the way, this game is endorsed by "L'Équipe" and "Le Parisien". It can be said that it is an official Tour de France game. 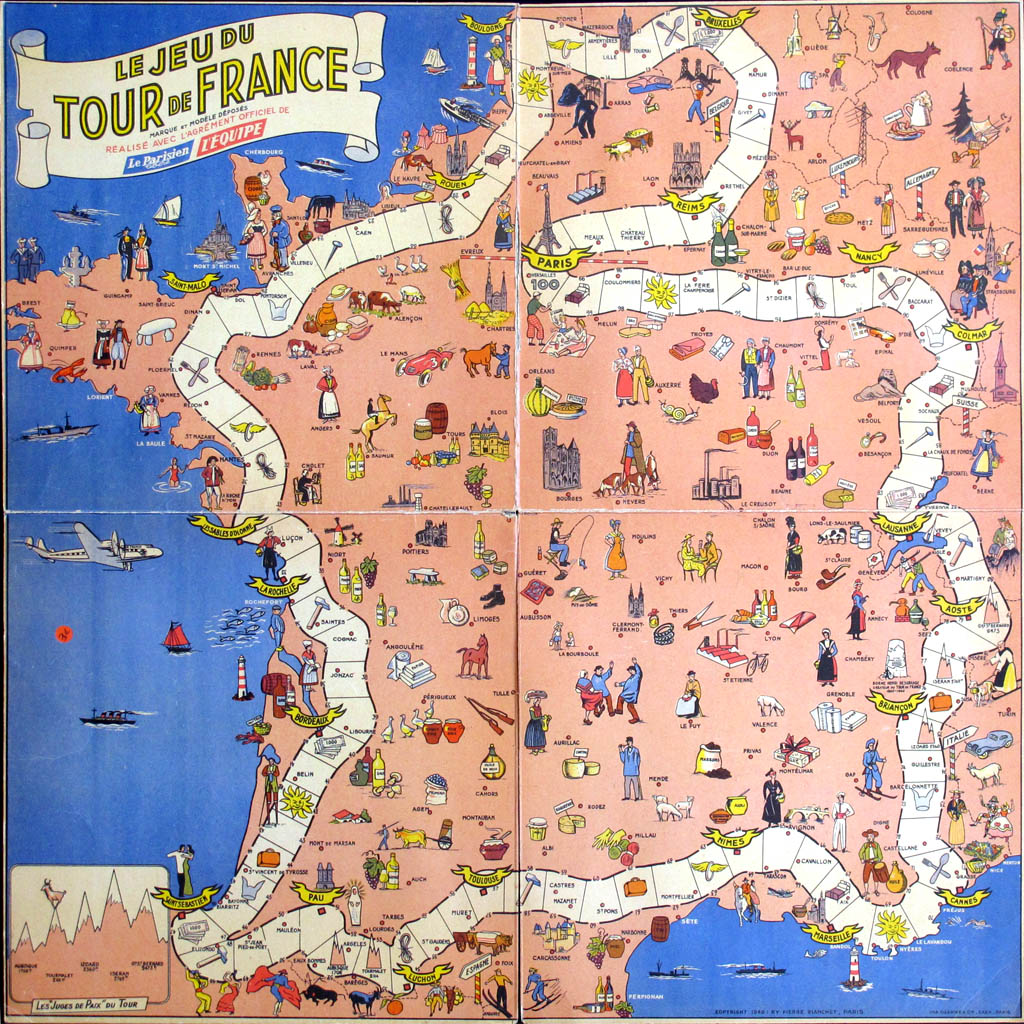 The stages are those of the 1949 Tour de France. It was a very "international" Tour, with stage finishes in Belgium, Spain, Italy and Switzerland.

This game is not only beautiful but quite big too. The box measures almost 40 x 40 cms and the open board measures 72 x 72 cms.

It features 20 riders, two of them the "maillot jaune" and the "lanterne rouge" which substitute the first and last rider during the game. The other 18 riders are divided in 9 national and nine regional riders. The national teams include the USSR, which did not take part in professional races, and also Great Britain and USA, which did not take part in the Tour de France either. Some of the regional teams are made up too. One of the regional teams is "Afrique du Nord", which was a French territory in 1949.

The 8 cars actually take part in the game (well, almost...).  When a rider falls in a bad square, he shall throw one die and if he throws the number of the right car, he gets assistance. (For instance, if he falls on a "hunger" square he needs to throw a 5 to have some Eriam's chocolate).

On the other hand, Bourvil (who?) and "Miss Tour de France" are just there for the ambiance. 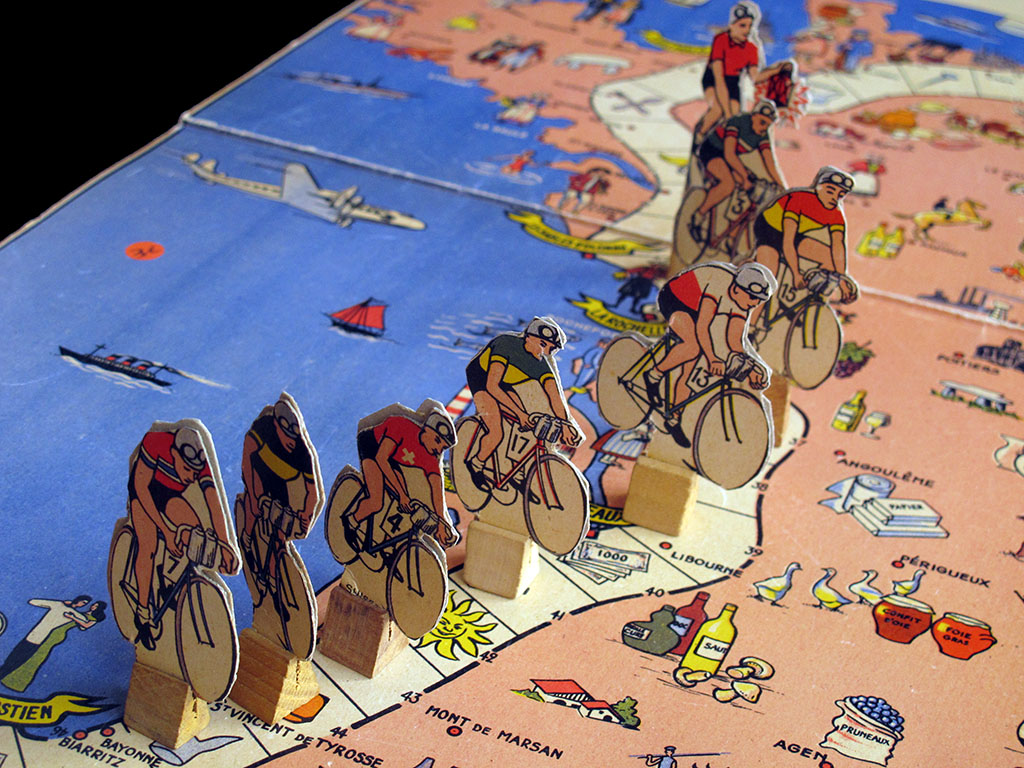 The riders are oversized, as you can see. 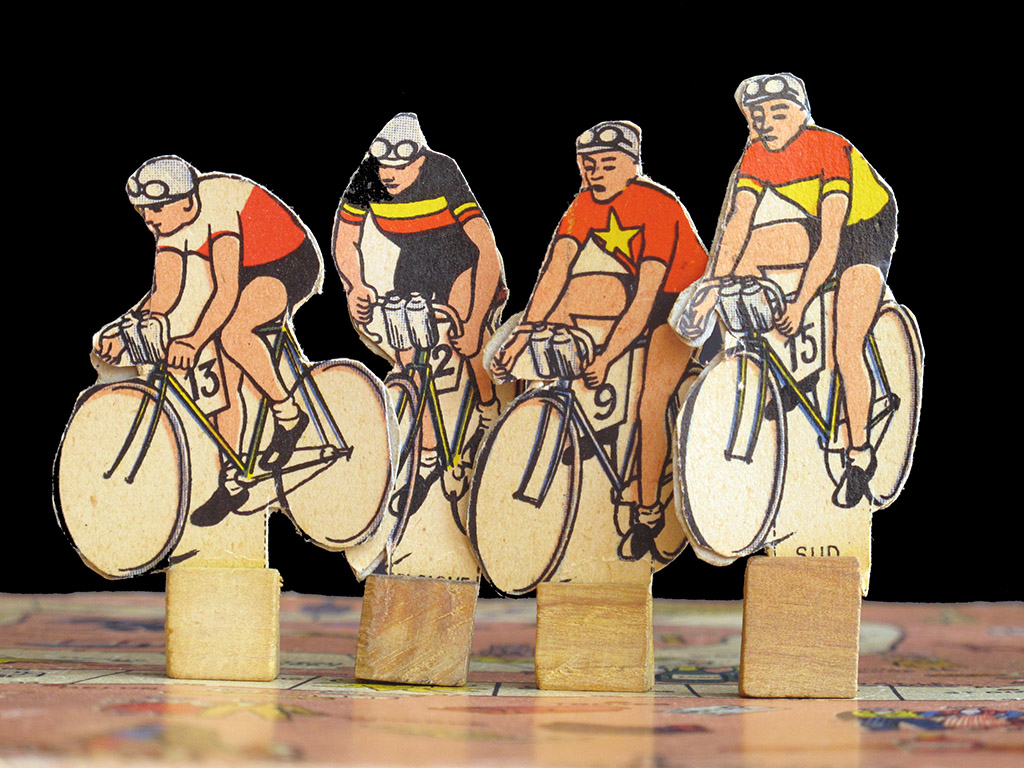 Riders from the teams Lyonnais-Centre, Belgium, USSR and Sud-Ouest. 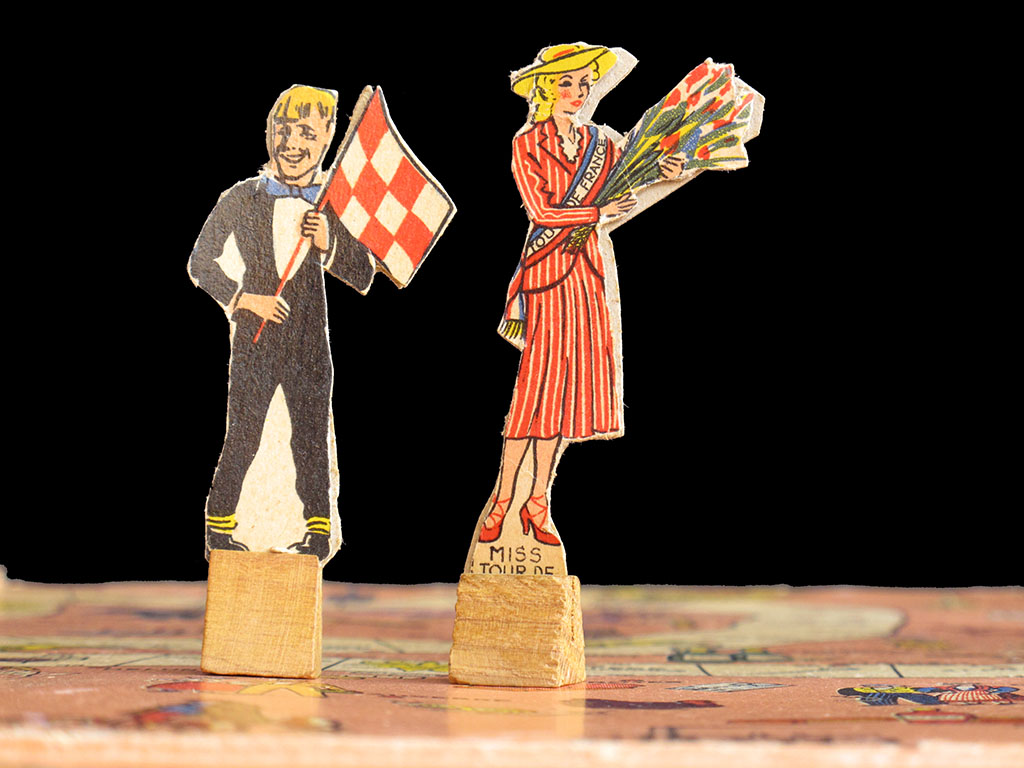 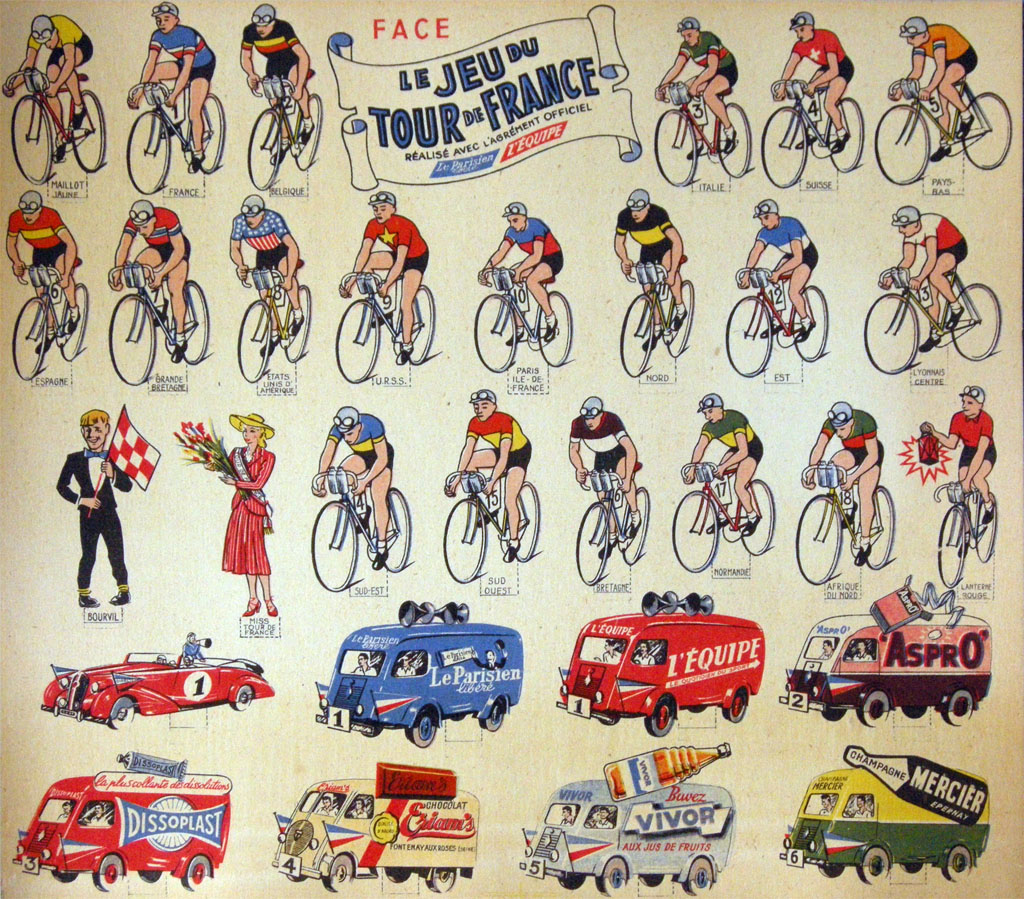 The uncut figurines. There are two symmetrical panels. The riders, thus, once assembled, have two faces and no back. 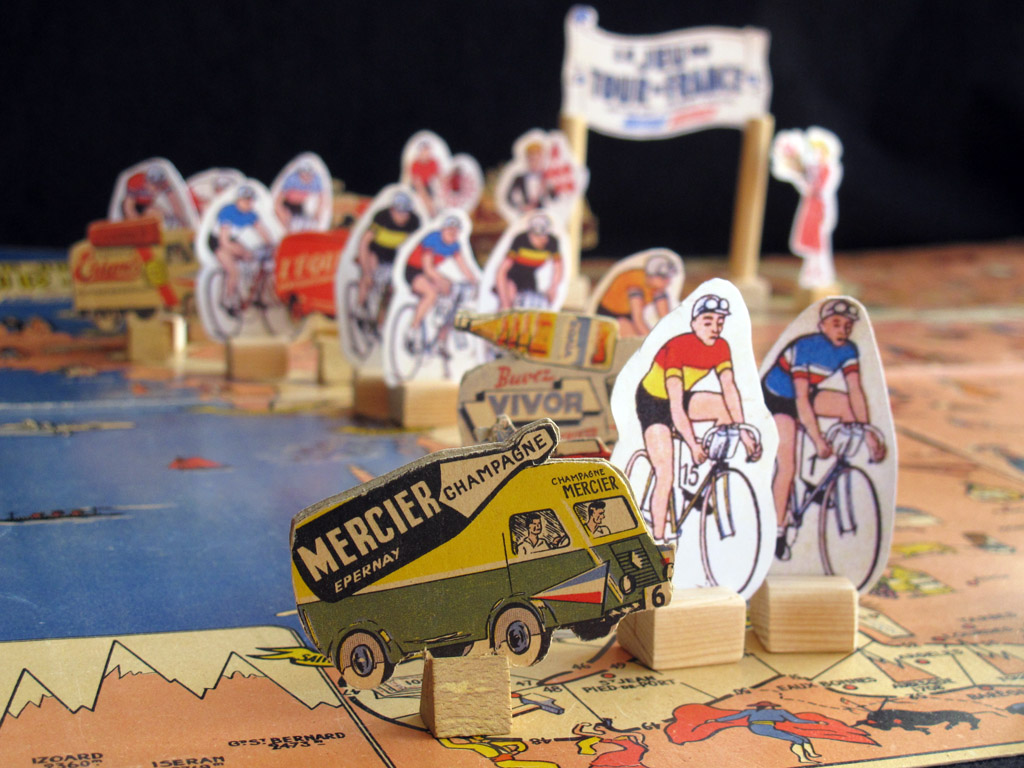 The cars are original, the riders are not, but original size, though, is respected. The cars are just too small(or the riders to big, as said above). 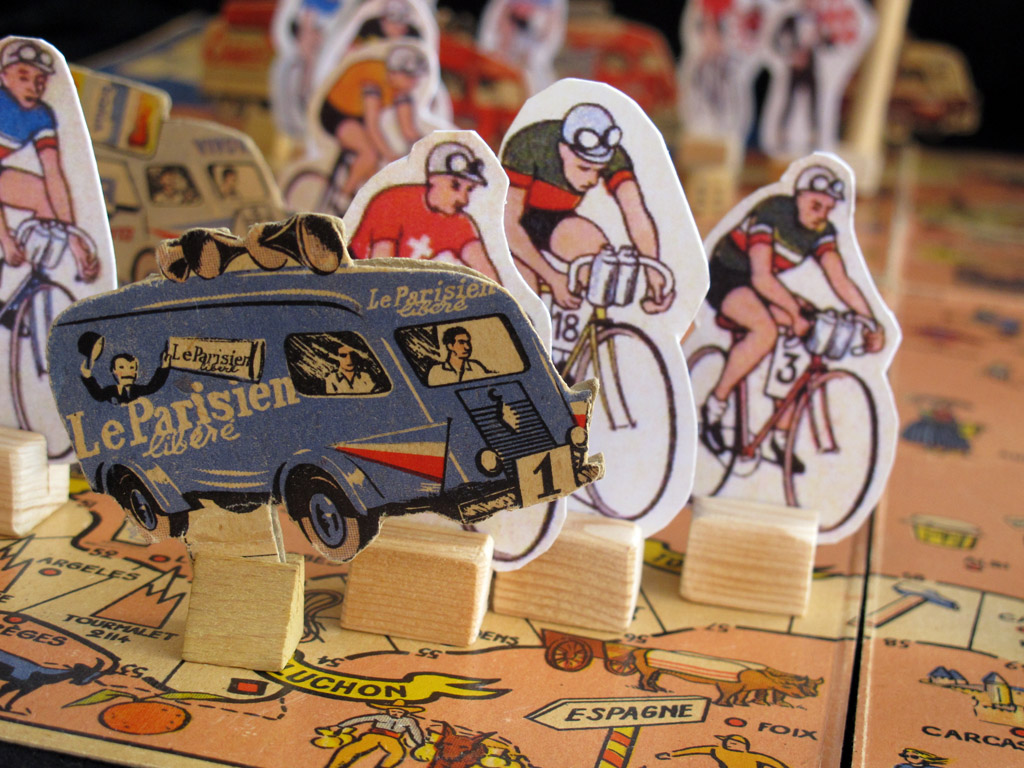 The wooden bases of the cars are also original (those of these riders are not). 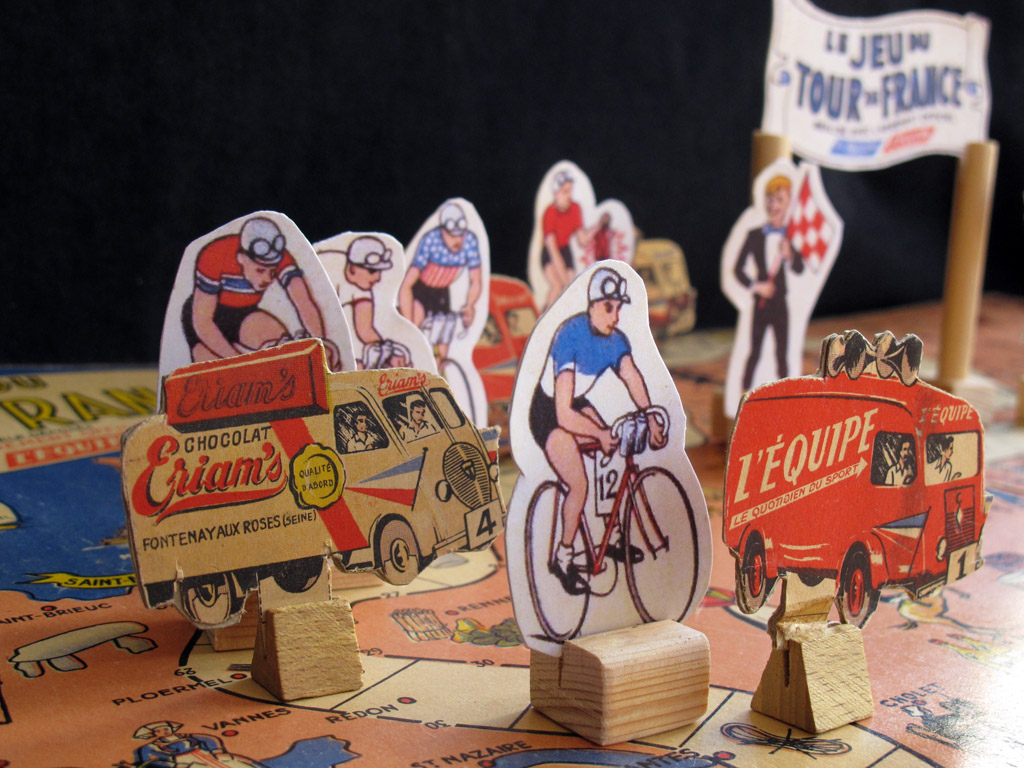 "L'Equipe" car on a "puncture" square. 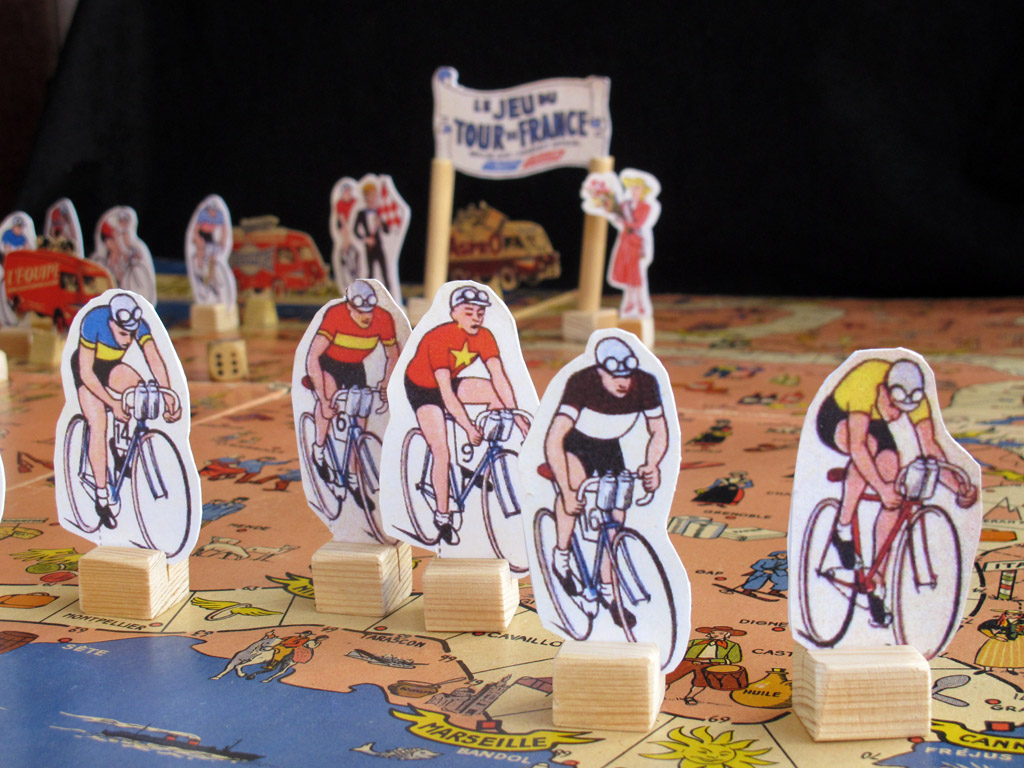 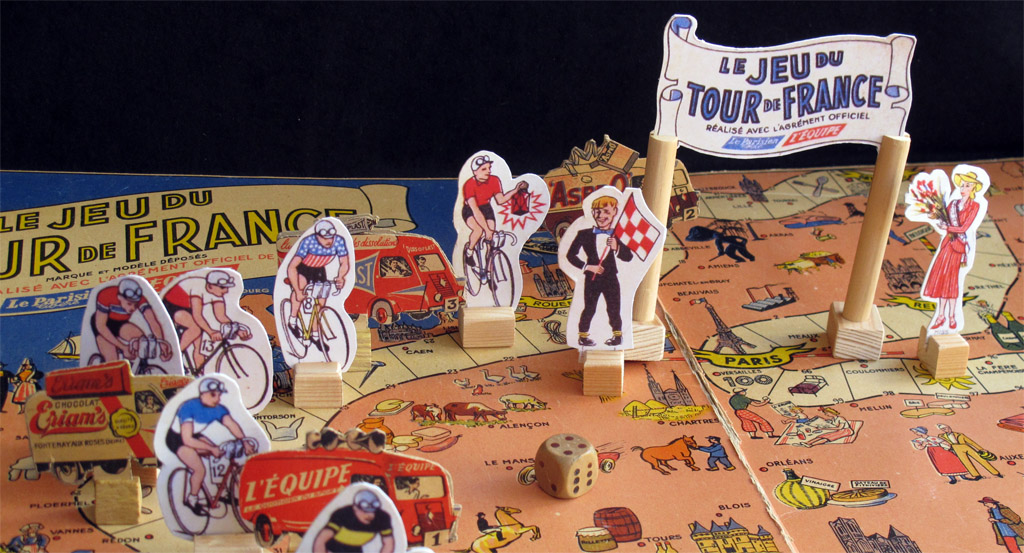 Bourvil and Miss Tour the France near the banner. The red lantern rider, of course, is always closing the peloton. 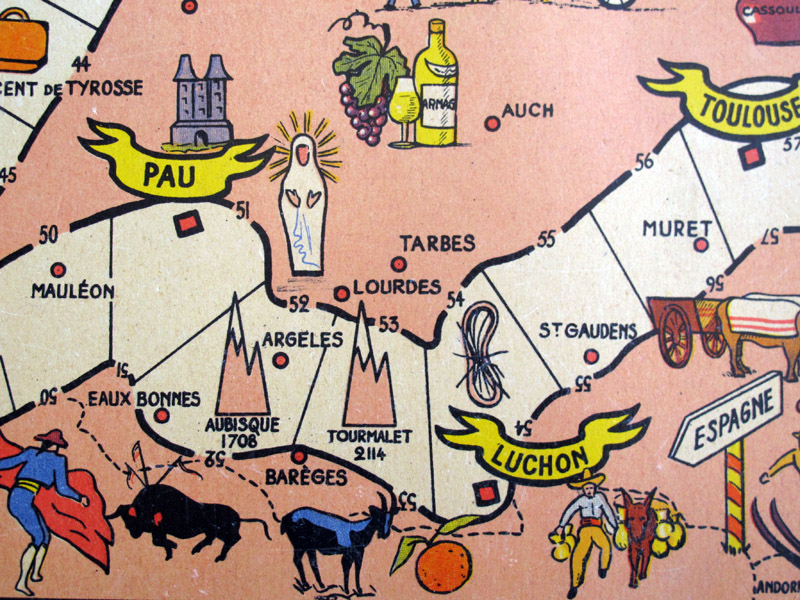 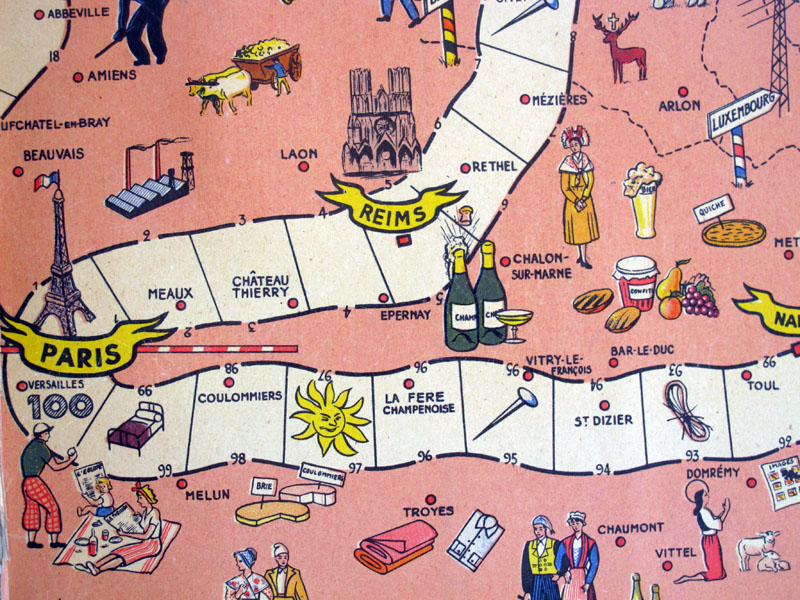 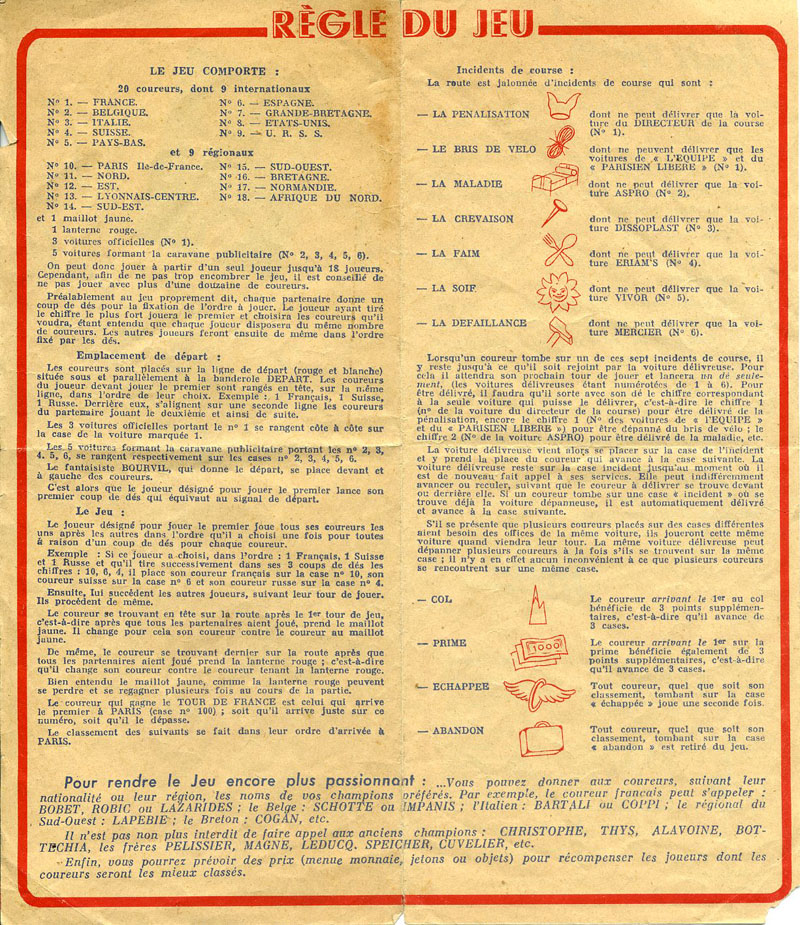 Unfortunately, the rules of the game are childish, almost a game of goose... but who cares when the game is so beautiful? 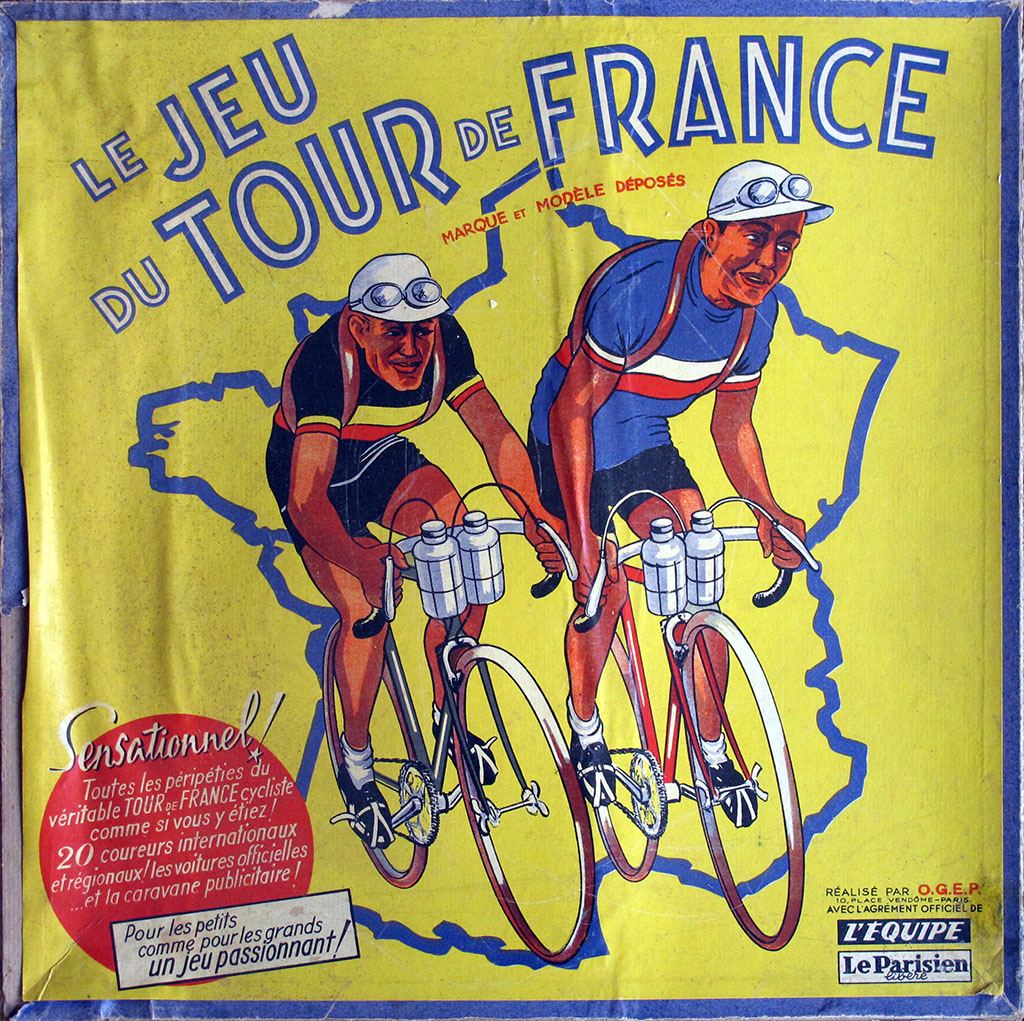 The front of the box.  One of the finest front-box illustrations in my collection. 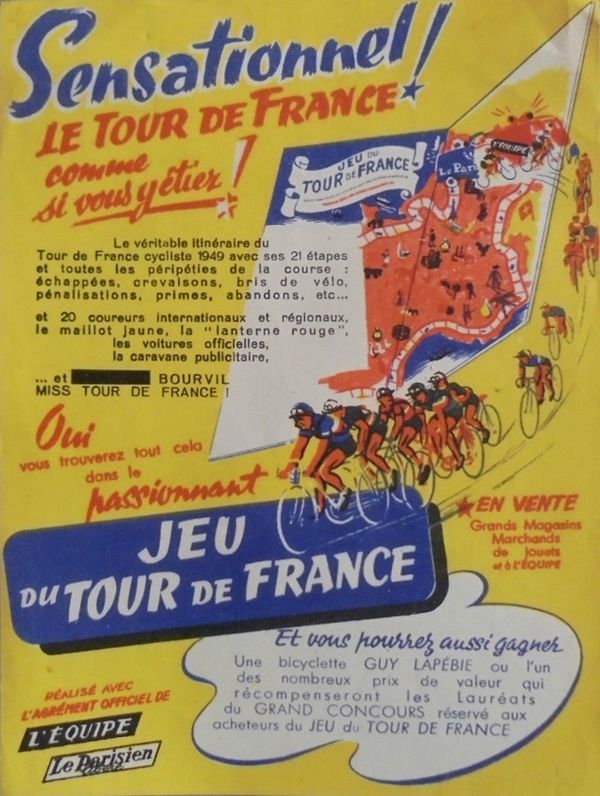 This game was widely advertised. The image above is a postcard-sized advertisement seen for sale on eBay. James "Aldo" Ross, has sent several scans of a 1949 Tour de France "Programme Officiel" published by Les Éditions Paris-Vendome, which includes several advertisements for the game, along with a photo of the editors of L’Équipe examining the game. 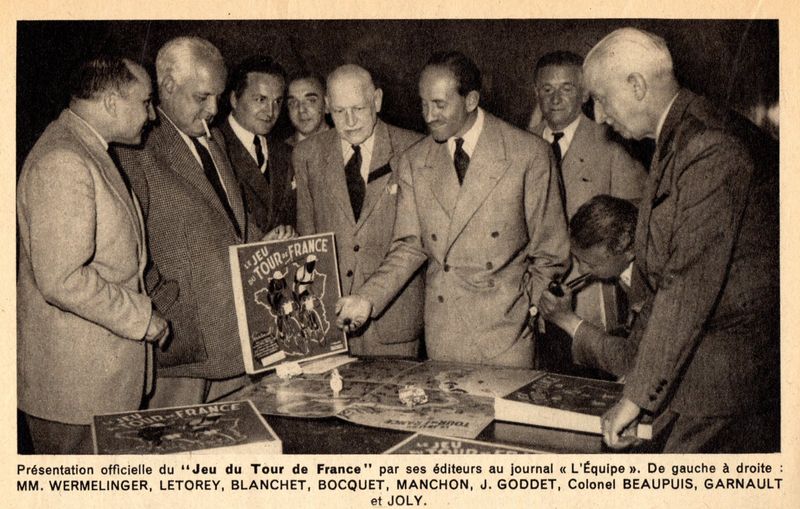 This ad, also sent by Aldo, was published in  l’Équipe on June 30th, 1949. It measured almost the entire width of the newspaper page. 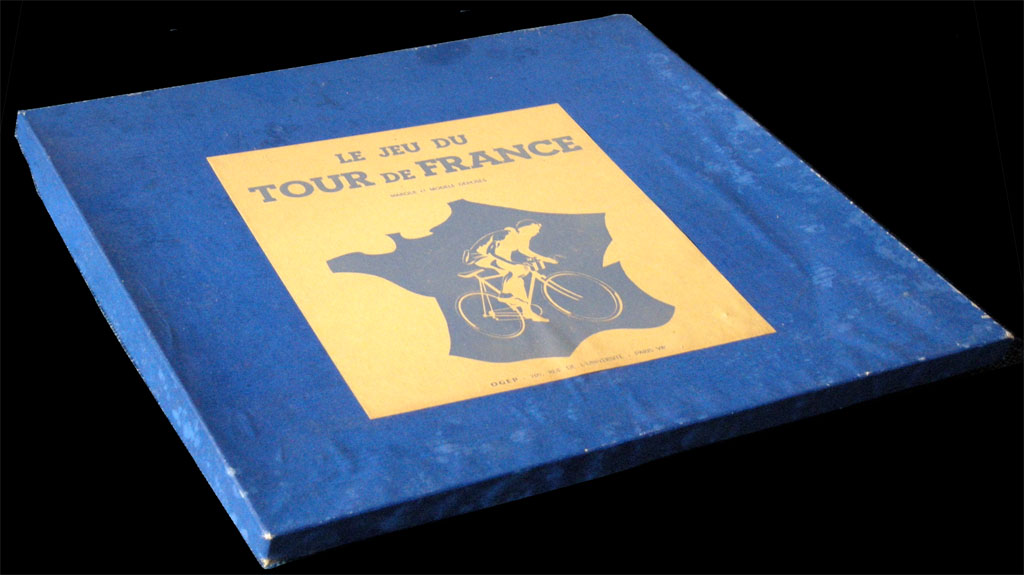 This is the unusual but original blue box mentioned above.