Another beautiful game, in which you make your own circuit with plastic road segments. There are two different boxes, marked "1" and "2", but the content is almost identical. Box number 2 has black road segments, as you can see. However, since this box is quite hard to find, I am not sure if all copies have these black road segments. I once saw a copy of this game (it was a box number 1) with mixed brown and grey (not black) road segments. It might have been replenished with parts of another game (a car racing game).

UPDATE MAY 2020: Scroll down to the bottom of the page for more details on the different boxes.

A part from the road segments and the color and shape of the riders (different in every box I have seen so far, see below), there aren't important differences between the contensts of the twq boxes.

By the way, as you can see in the picture below, there are only 4 riders in the box, and there is no place in the box for two extra riders. (On the other hand, there is space for two extra dice, but the game only has two). However, the game instructions mention six riders and state that the game is for 2 to 6 players.

These riders are quite similar to those made by Starlux, only smaller. 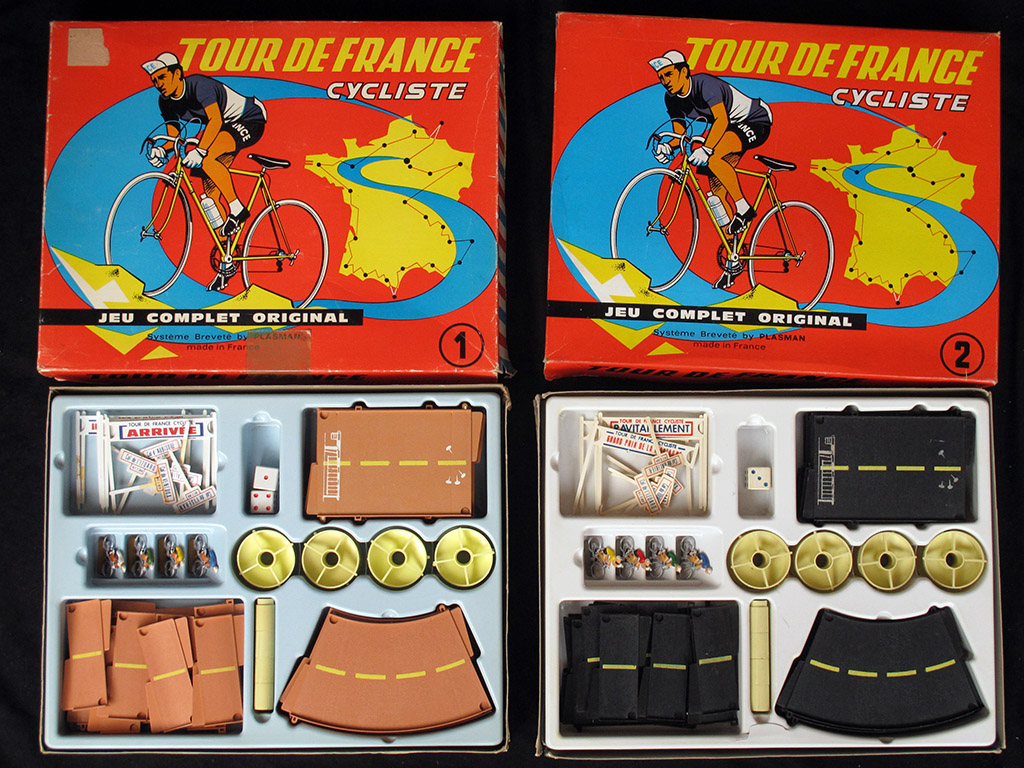 Notice that the die in the second box (the second die is missing) has blue pips. The road signs and banners are identical in both boxes.

The game instructions also provide templates to make some races for which you need at least two boxes. Maybe that is the reason that there are two boxes with different numbers. However, you can do it with two number 1 boxes, and you will have the benefit of having all the road track segments of the same colour.

This are the 4 riders in my number 1 box. Two climbers and two seated riders. I do not have a "jaune rayé" as mentioned in the rules but a plain yellow jersey instead. 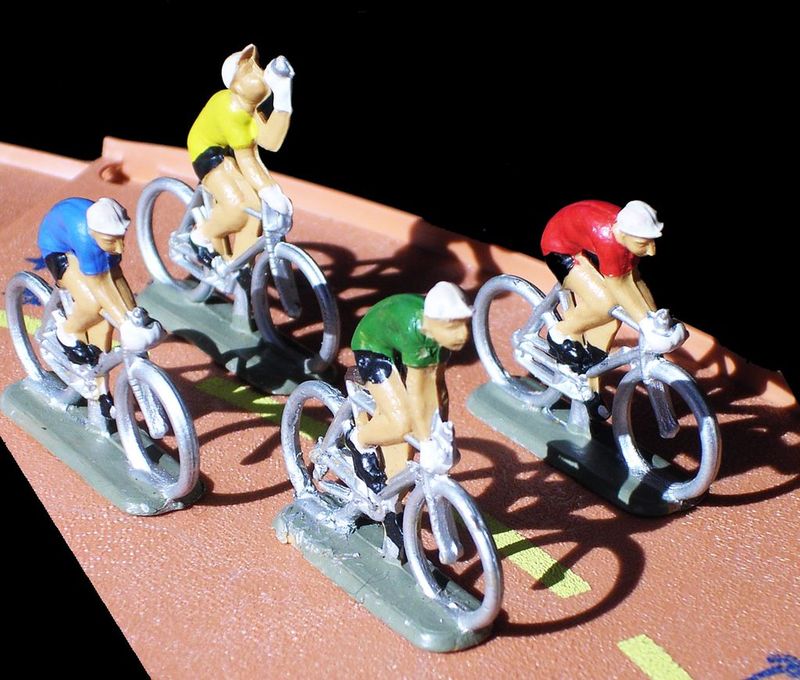 These riders come from one of the boxes in the Pierre & Bilou collection. Notice the drinking rider (again, in a plain yellow jersey).

For all its beauty, the game is disappointingly simple. It is just a childish roll-and.move game without any tactical twist. The game fields are the dashes on the road (maybe the first game to implement them this way). During the climbs you subtract two to the throw of the dice, during the descents you add two, and that's all there is to it. The race incidents are equally simple: go some fields back or miss some turns.

However, you are supposed to play a stage race. The delay in the classification is the number of dashes one rider is behind the winner of the stage, and these are added up. There is also a mountain classification, and very simple rules for the time trial stages.

The game includes implements to build mountains and hills. Instead of having some kind of mark on the road or a different colour, we find here the supports you see above with which you can elevate the road. You can also cant the curves with them. The smaller road pieces are curved to make the transitions smooth. The piece on the left ins placed between the flat part of the road and the mountain, while a couple of pieces like the one on the right make the mountain (or hill) top. There are four of each of these pieces in the box. 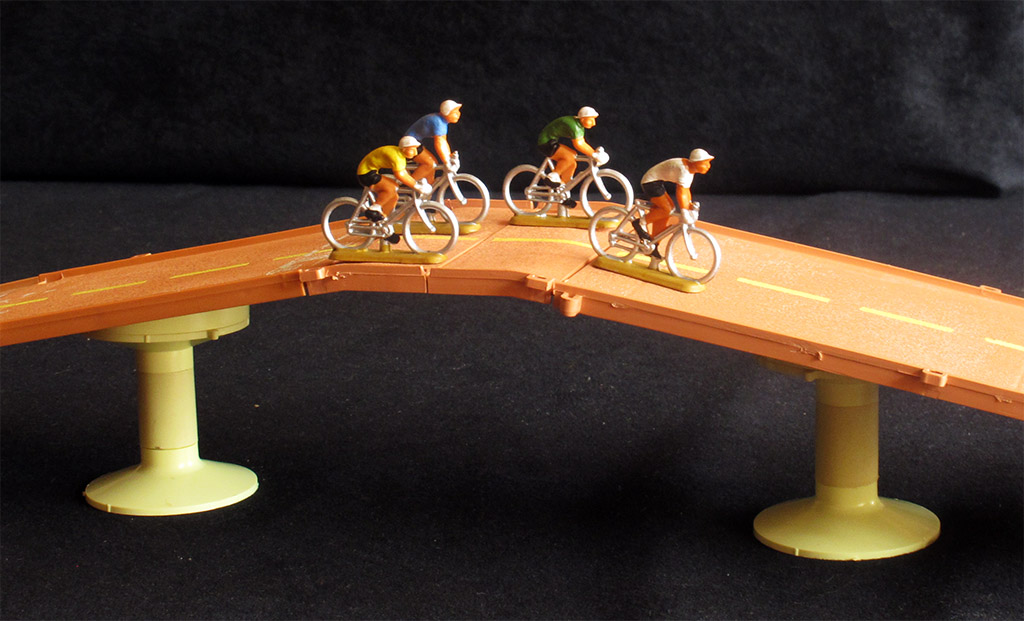 Unfortunately, this idea does not work:  the riders slide downhill all the time.  I had to place them on top of the hill to take the picture. 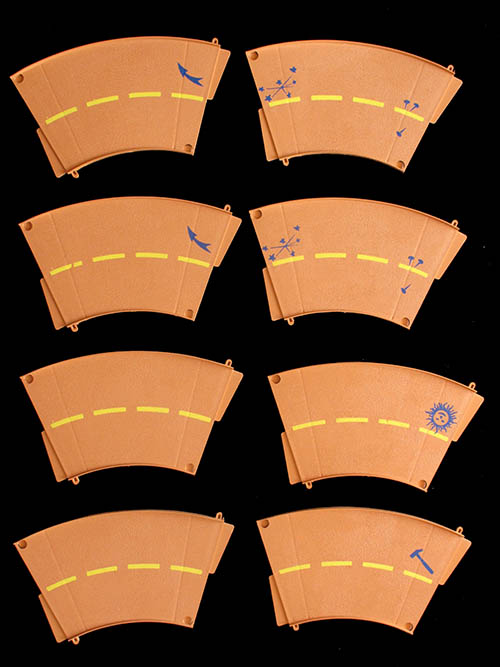 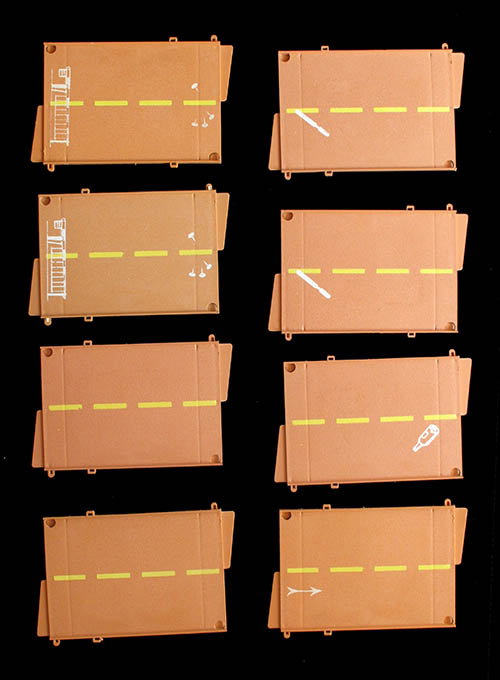 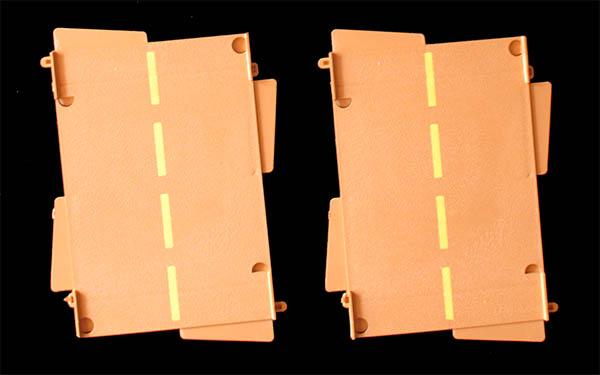 This are supposed to be crossings (or the entry to the velodrome). 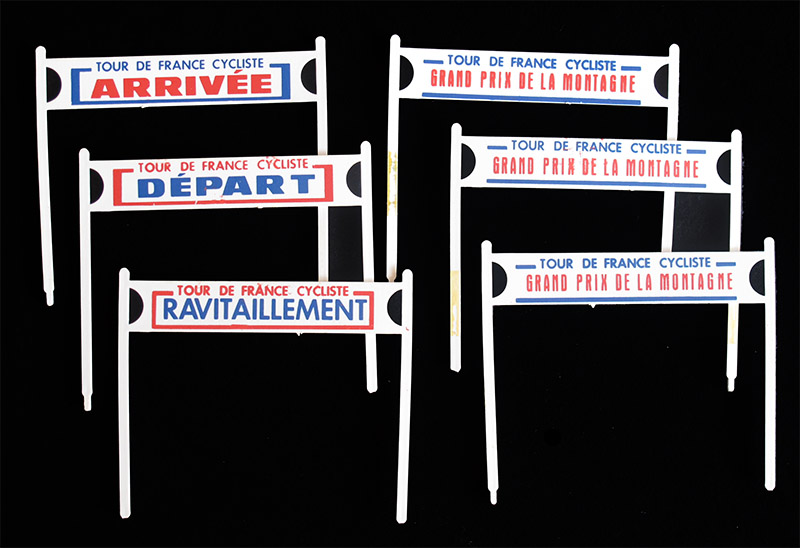 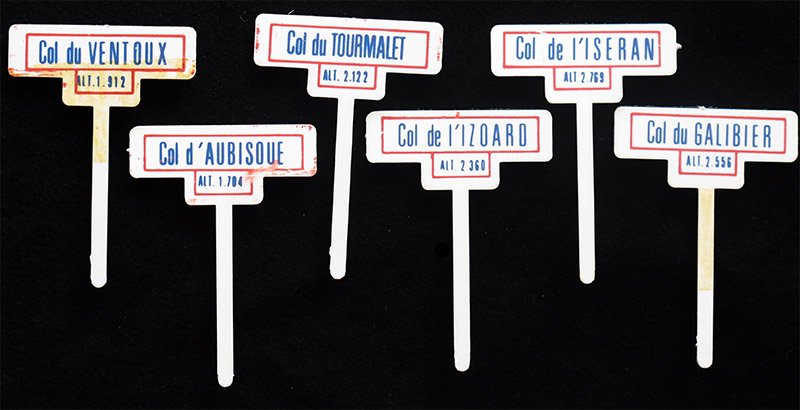 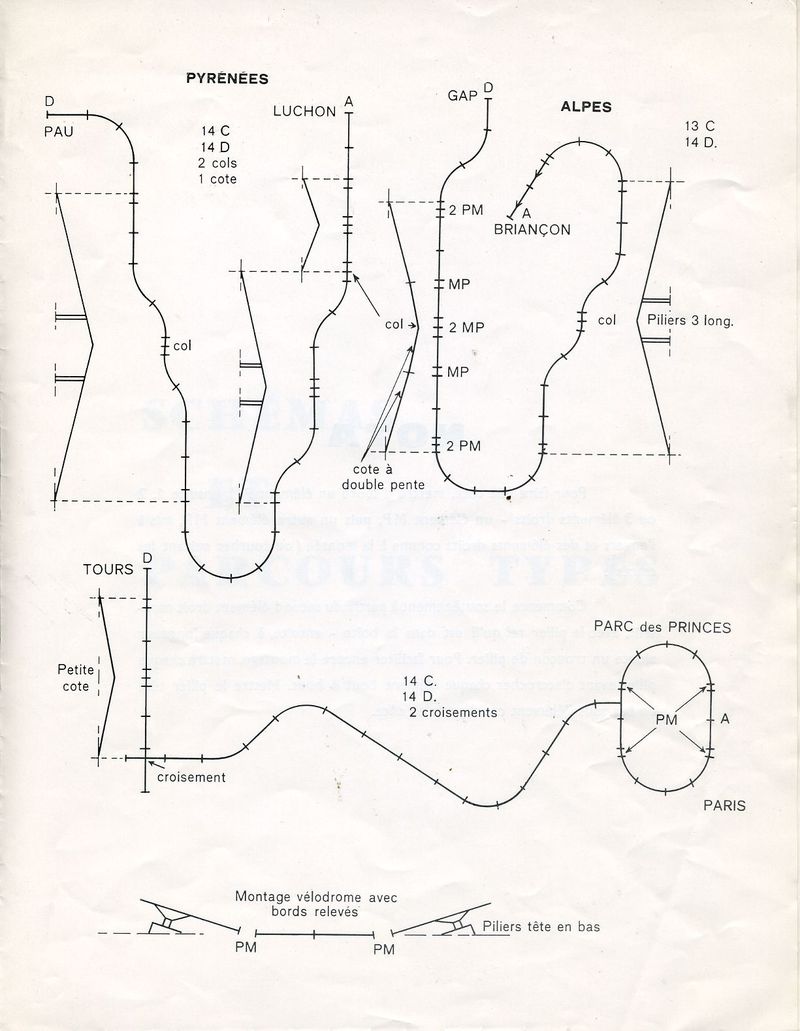 Here is a sample from the instructions in which you are shown how to cant a velodrome (don't!).
As you can see you need the contents of two boxes to make the stages
("14 C", for instance, means 14 curves while there are only 8 in a box).

Compare the riders in my two boxes. As said above, these riders are quite similar to those made by Starlux, but they arey smaller.

UPDATE MAY 2020: There are two different boxes with the number two, and I am afraid mine is not the best of them: the other box is bigger. 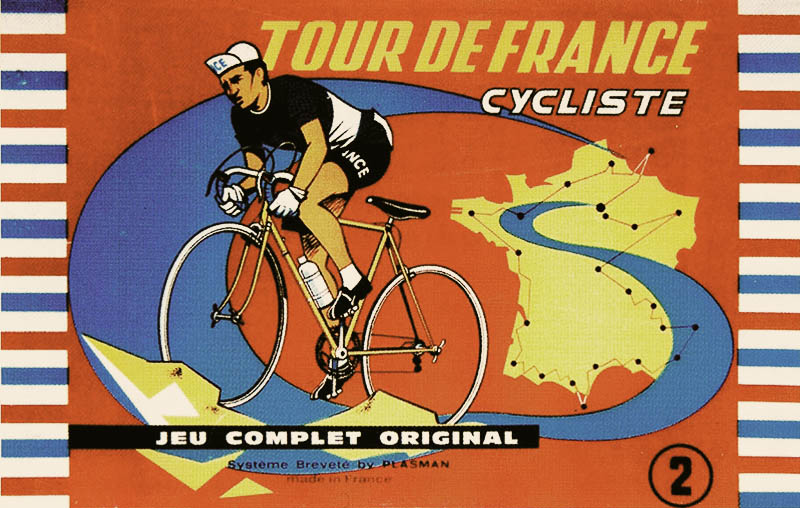 My friend Didier Maria has been kind enough to send me pictures of the contents of both boxes for comparison.  According to Didier, this second box has two extra curves (which makes 10 in total), three extra straights (which makes 13, including the crosses), two extra sets of implements for the climbs, and one extra rider. As you can see in the picture above, there is no slot for the fifth rider in the box; it looks like this rider could have been added later. 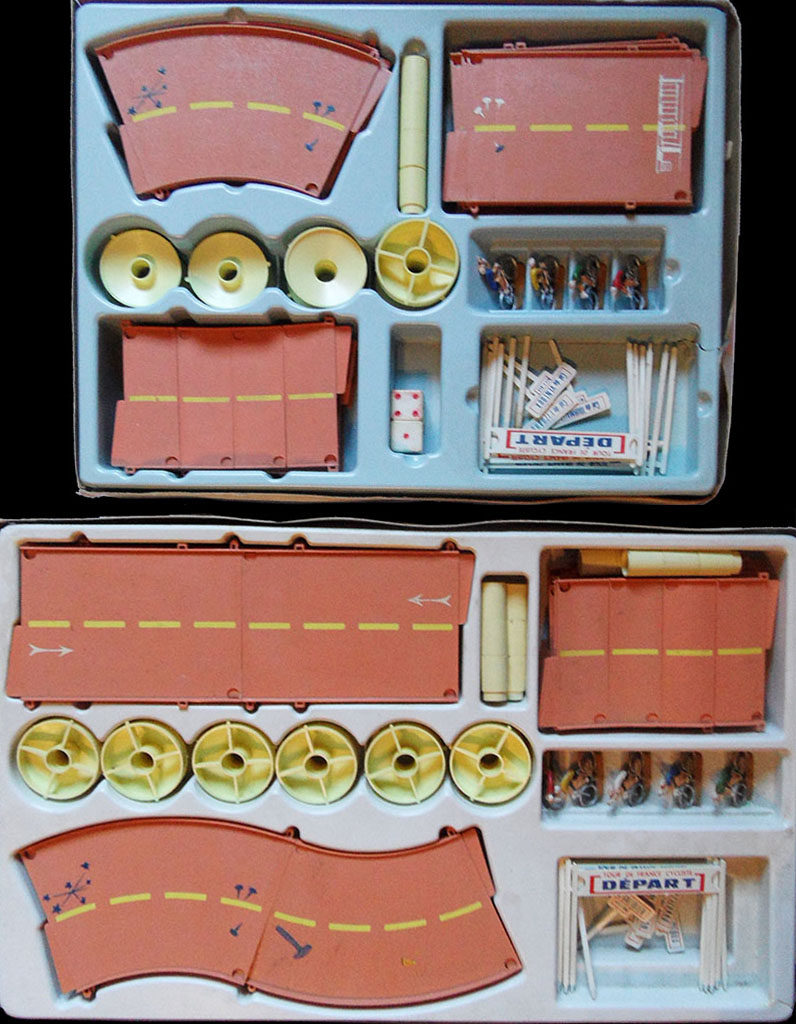 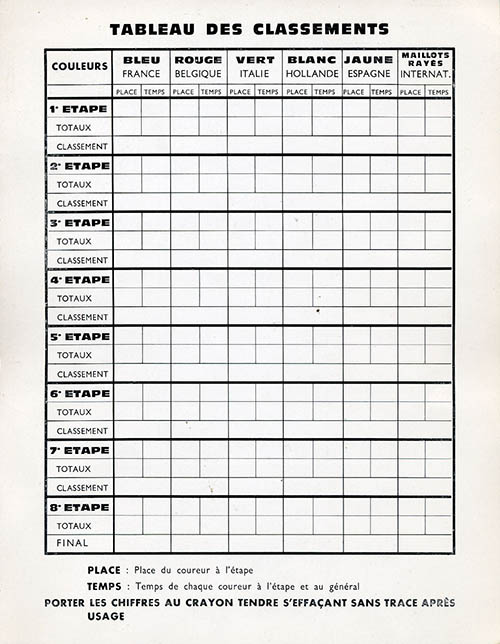 Furthermore, as we have seen above, the rules (again, in all the boxes) include settings for stages with 14 curves, 14 straights plus two crosses, &c, which cannot be built with the contents of any single box, not even the big one. In the end you had to buy two boxes if you wanted to build all the stages described in the rules. And in this case you would have -at least- 8 riders.

What I am not so sure is that you would have six riders in different colours. I have never seen the rider with the striped jersey ("maillot rayé") mentioned in the table. All the boxes I have seen contain a red, a blue, and a yellow rider, with the fourth rider either green or white. Didier's box has both, but still no striped rider. 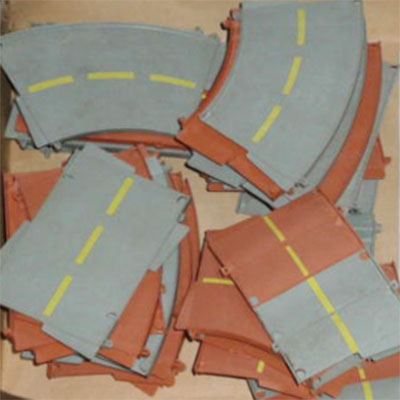 Here is a picture of the box with mixed grey and brown tracks mentioned above.
(I saved the picture from the internet. Sorry about the poor quality).