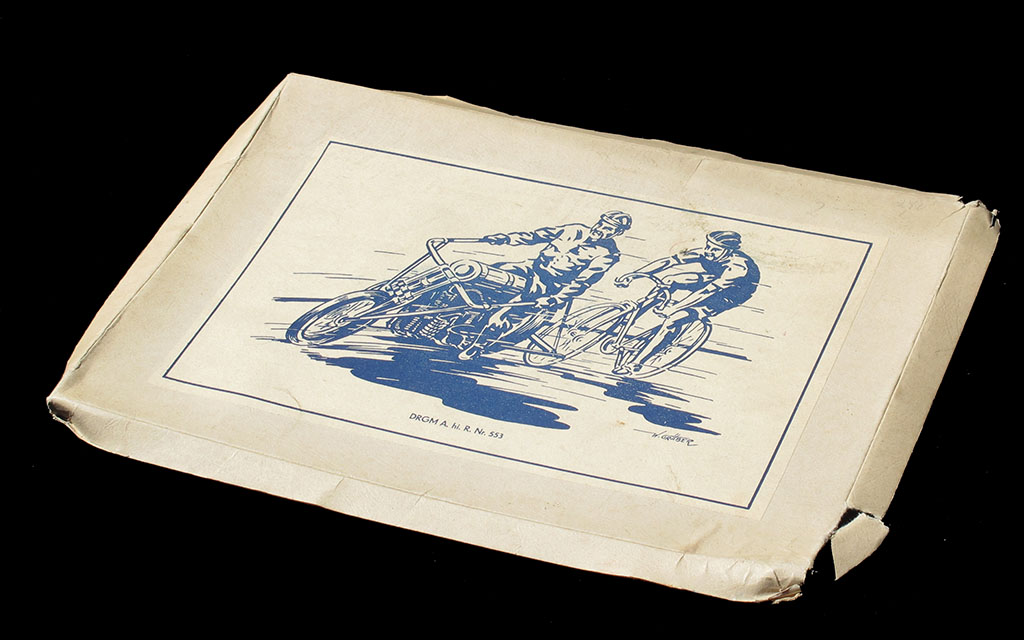 Old German game that represents a motor-paced race. As you can see, the box has seen better days and the counters and die are long-lost. According to the rules the game is for 2 to 4 players and is played with one single die. Even if it were not crushed, the box is quite flat and does not have much place to store anything in it. 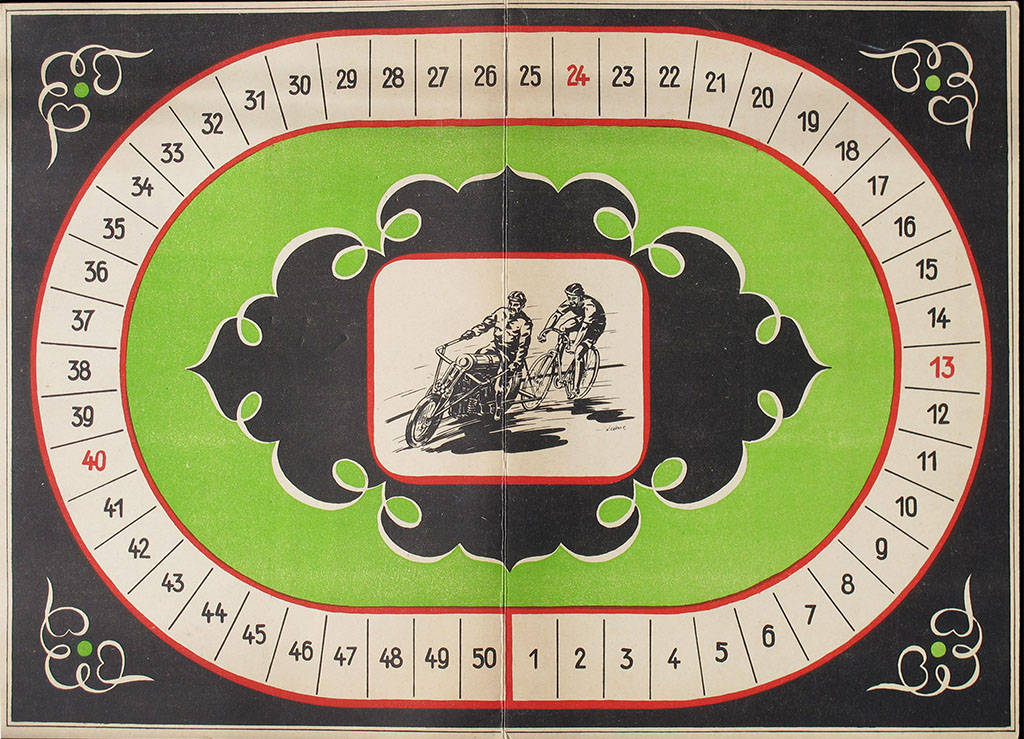 The board is just a simple 50 square track with three special squares marked in red. It measures 49 x 34 cms and is made of light cardboard. This was probably not a luxury game, although I do not know what I would think of, say, 6 in einem if I did not have the riders. 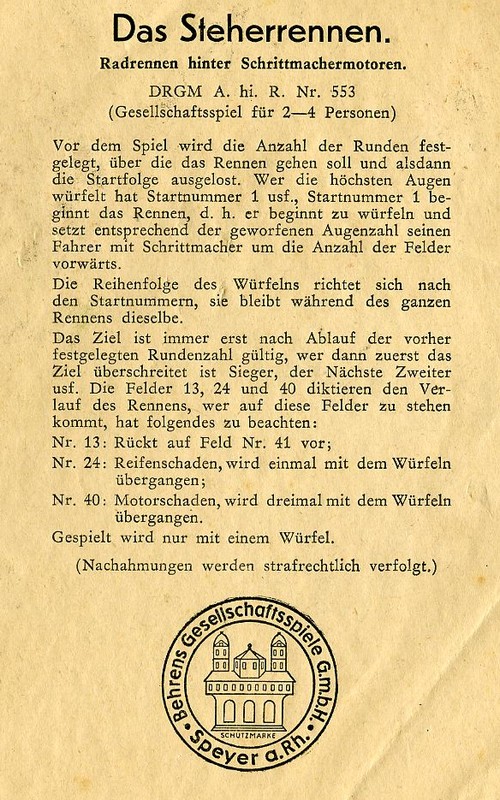 The rules are very simple: The number of laps is determined before the game. The players roll for the starting order, and this order will remain the same throughout the race. On square 13, you move forward to square 41; on square 24 a puncture makes you lose; on square 40, an engine  failure makes you lose three turns. An that is all.

Nothing in the mechanics of the game represent a motor-paced race except the mention to the "engine failure" on square 40. It is a pity, since there not many games representing motor-paced races (I can only think of Montlhéry Record and the "Mezzo fondo a motore" game included in the 1964 Corriere Dei Piccoli I Campionati Mondiali de Ciclismo). Of course, unlike the two games mentioned, I do not think there were separate counters for the bicycles and the motorcycles in this one. 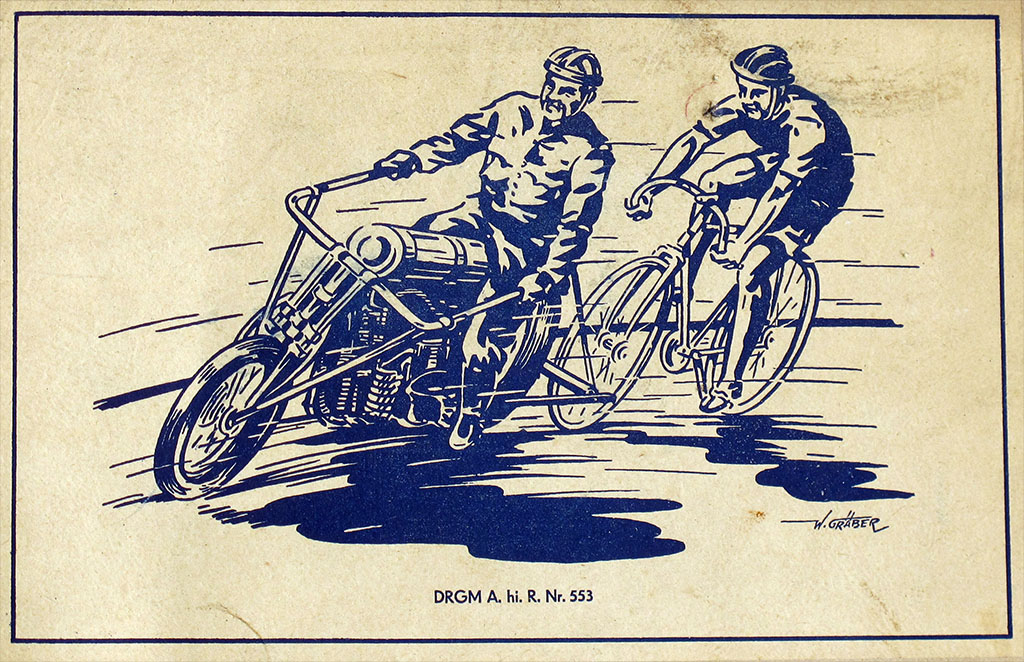 The name of the game is not featured on the box, but on the rules' sheet. The game box just features a fantastic drawing signed by W.Gräber. It depicts an old derny and an old bicyle, but I do not dare to say how old. Motor-paced bicycle races have been around for quite a long time. The world championships started in 1893 for amateurs and 1895 for professionals (Wikipedia). Not bad considering motorcycles are not much older. The internet is full of old pictures of old motor-paced bicycles (here or here, for instance) and I find it quite difficult to date this game just by the picture on the box. The motorcycle and the bicycle are certainly old, but I cannot tell how old. So take my estimation with a pinch of salt. The game might be older.

On the other hand, the game is marked with the inscription "DRGM A. hi. R. Nr. 553" both on the game box and the rules' sheet. The acronym D.R.G.M. -with or without punctuation- stands for Deutsches Reichsgebrauchsmuster. D.R.G.M. registration was introduced 1891 and lasted up until 1949. The DRGM number should be enough to date the game accurately, but I have been unable to find (useful) information which would allow me to, nor about the meaning of "A. hi. R." Maybe German game collectors can help?

Thanks Laisvydas for the tip that allowed me to buy this game.