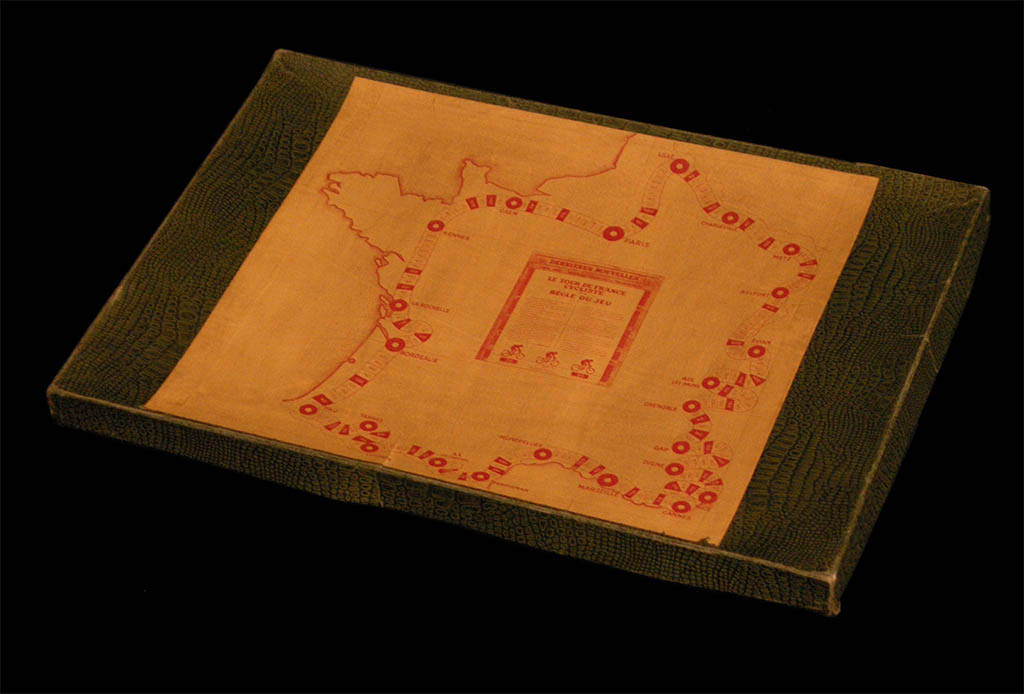 Pre-war boxed game which looks like a promotion for a newspaper, Derničres Nouvelles. I am not sure if it is the venerable  Derničres Nouvelles d'Alsace (created in 1877 and which still exists), but I have not been able to find another candidate, even though the game was not printed in Alsace but near Paris. I am not even sure that this is a promotional game. On the other hand, I am quite sure that this is the game mentioned by Henry-René d' D'Allemagne in his 1950 book "Le Noble Jeu de l'Oie en France de 1640 ŕ 1950" (see below).

The game box is quite unpromising. It measures 45 x 31 x 3 cms and has an almost unreadable reproduction of the board pasted onto it (the rules on the box, for instance, are completely unreadable). 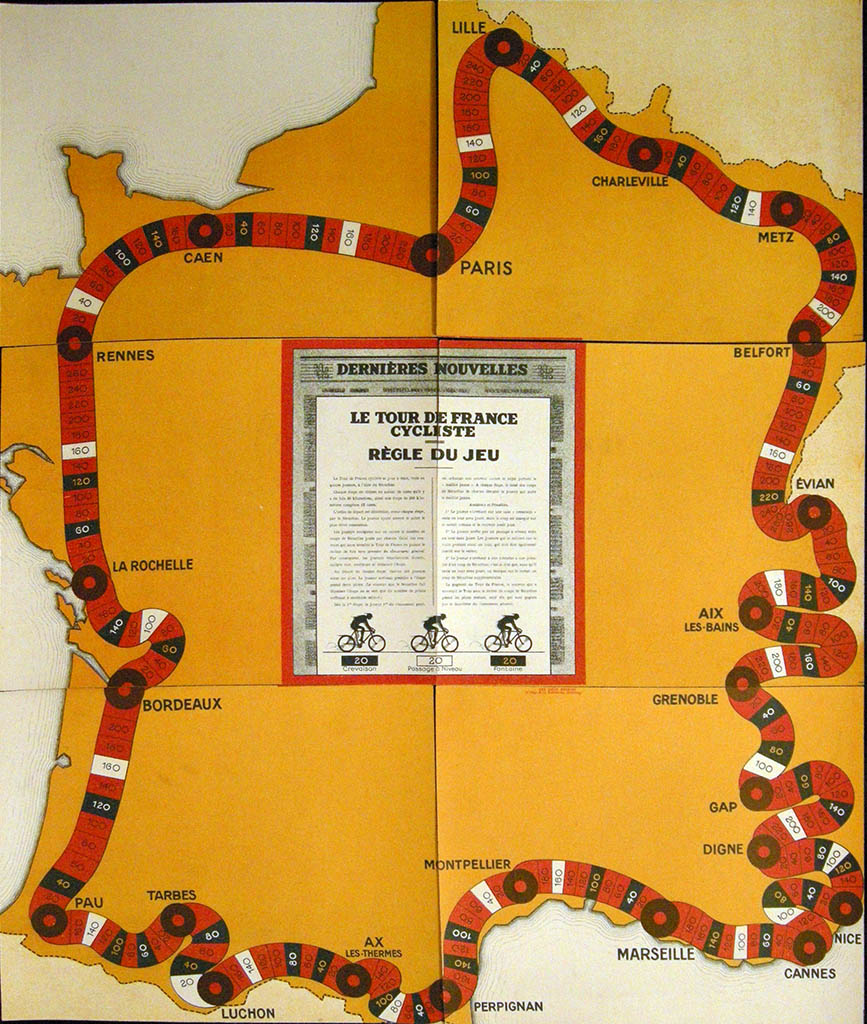 Fortunately, the contents of the box belie its appearance (you must never judge a book by the cover). The board consists of six panels of 37.5 x 30 cm each. The complete board measures thus 75 x 90 cms, which is quite big, and is quite minimalist.  The track, which follows the stages of the Tour de France of 1933, leaves a big empty space in the inner part which is occupied by the game rules. 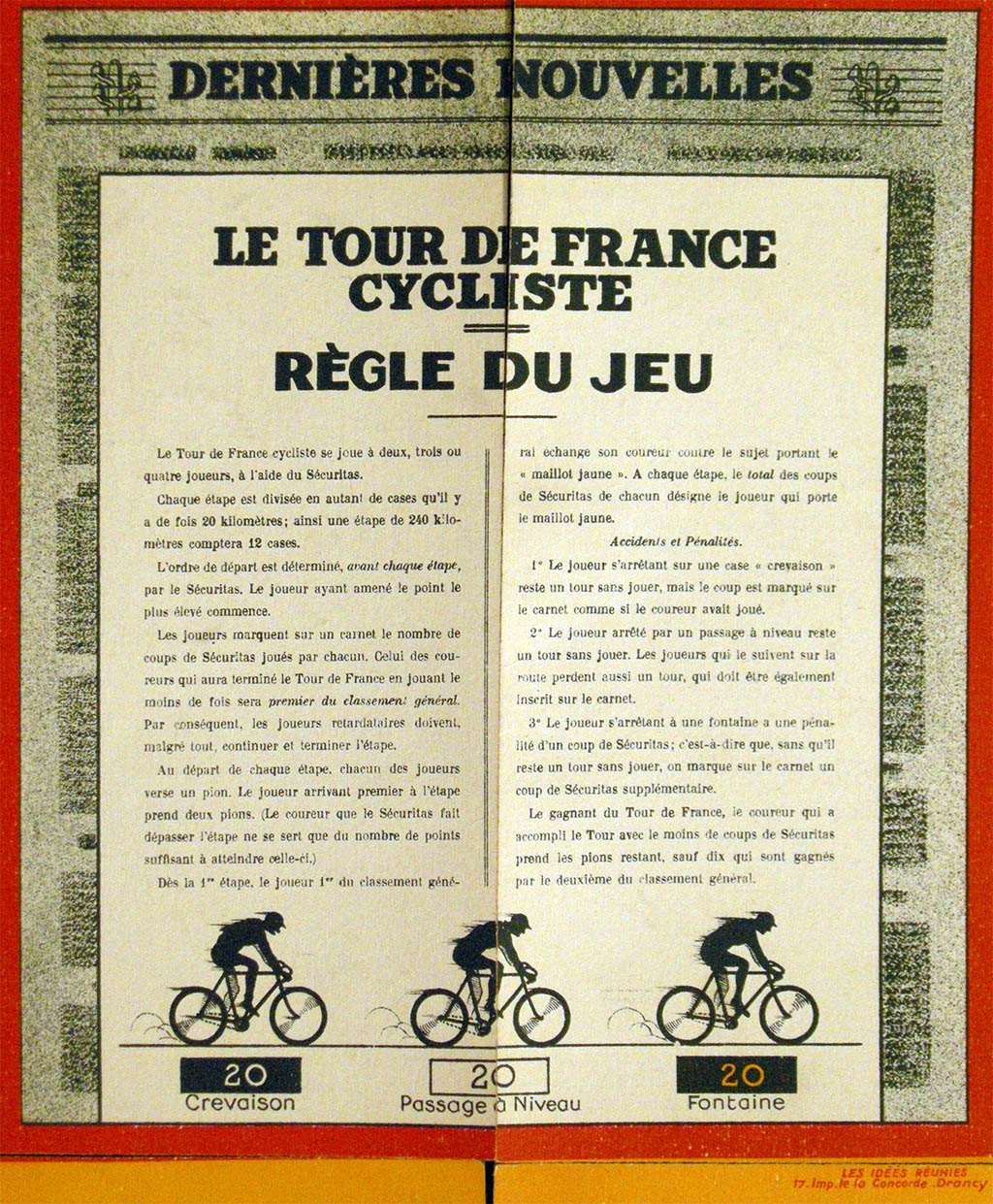 As you can see, the rules are framed by a reproduction of the newspaper header (anyone identifies this header?). The game represents a stage race,  which should not be surprising for a Tour de France game, but it is not always so. According to the rules, the game is played by 2 to 4 cyclists (while there are 5 in my box). The rules also mention a device, the "Sécuritas", which I do not have. It is surely some kind of randomizer other than a regular die (a spinner, a teetotum, or even a special die). All we know is that the player who obtains the highest result with the "Sécuritas" is the one who starts the game, so we can assume that, whatever it is, the "Sécuritas" has numbers on it.

We only need to know how many numbers and what values are on it. Anyone can help? 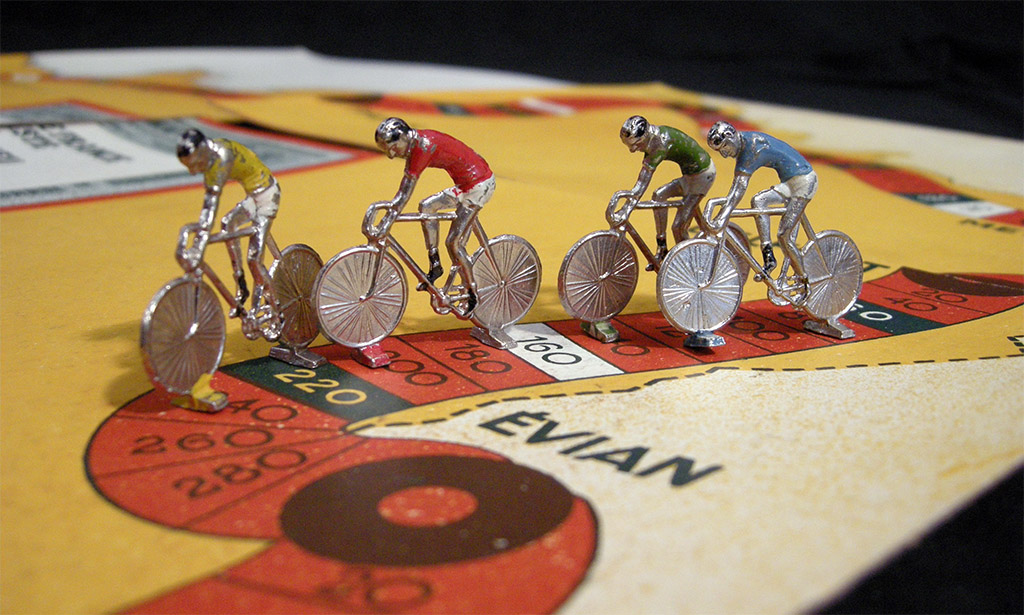 The tin cyclists are very beautiful, inconsistently beautiful I would say. At first I even doubted that they belonged to the game, specially considering that I had five cyclists. (Many old games have lost cyclists and other implements in the course of years, but it is quite rare to find an extra cyclist, and one of the same model than the others). However, I have a picture of another copy of the game, and it has the same type of riders, though it only has four. So, after all, these riders do belong to the game.

Unfortunately, this other game does not have the "Sécuritas" either. By the way, the colours of its riders are yellow, red, green and... pink! 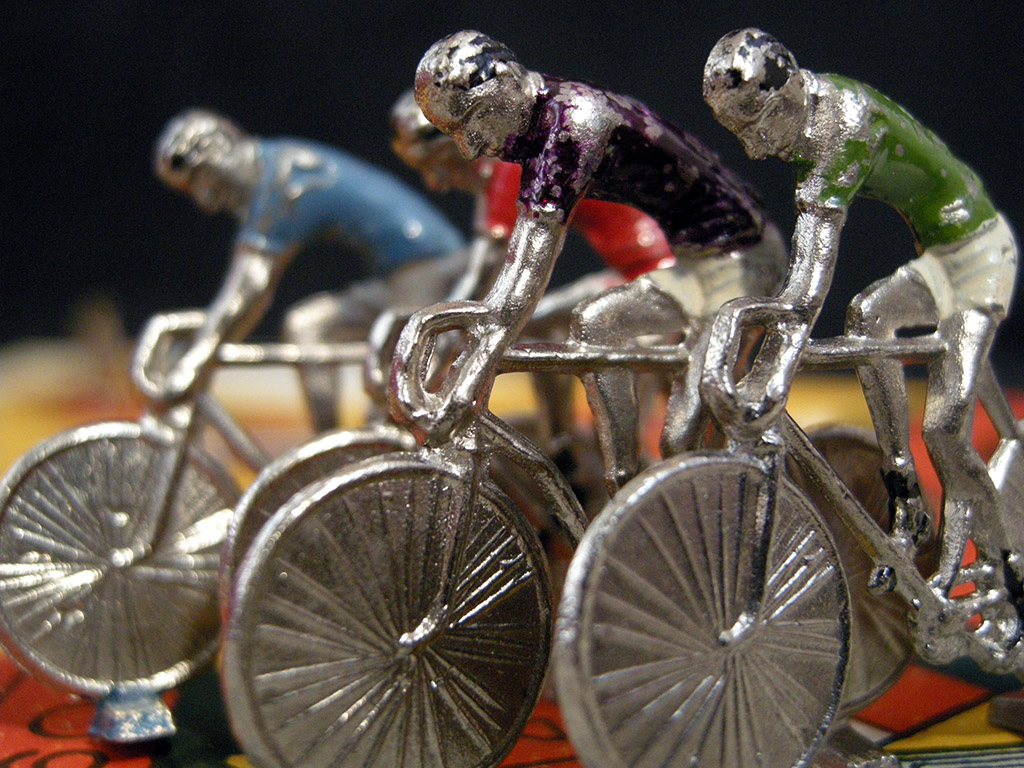 I do not have the pink rider, but I have blue and purple ones instead. 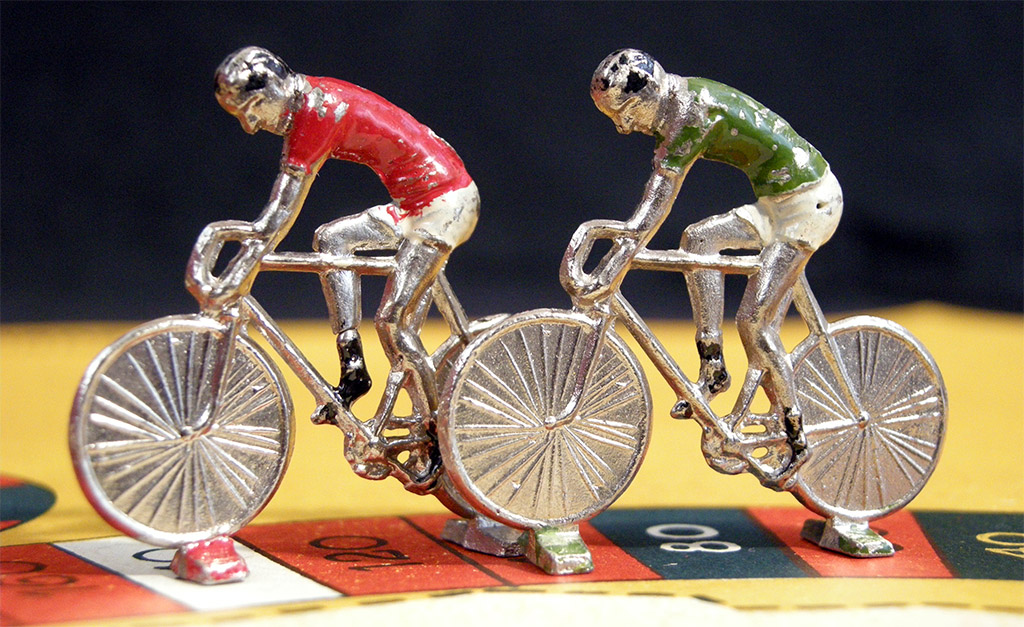 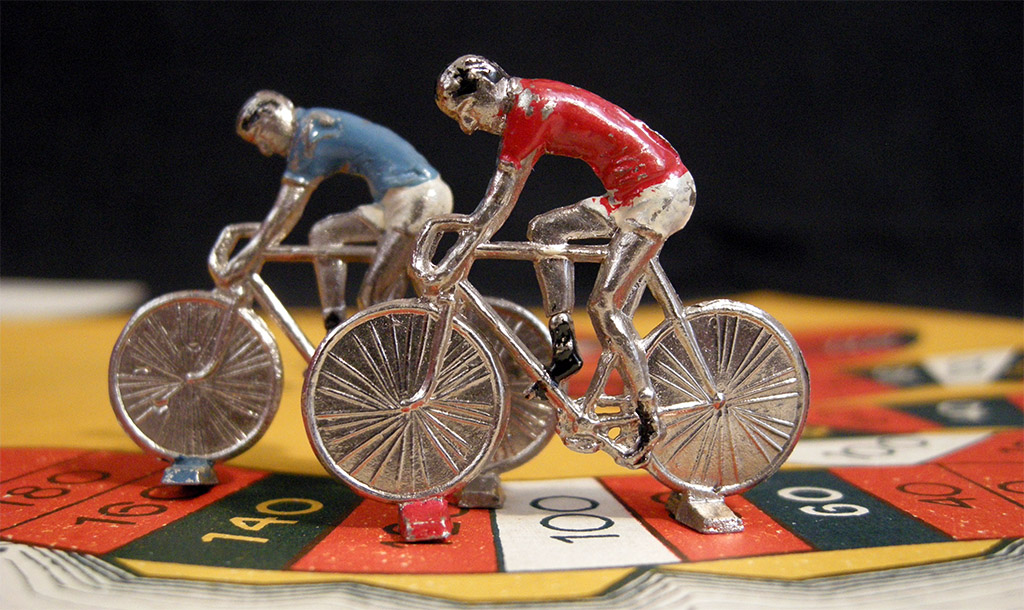 Alsatian or not, the game was printed at Drancy, near Paris.

This is d'Allemagne's (see bibliography) description of the game. There is at least another game with the same title and also published "v. 1935" that might fill the bill, but the sentence "probablement édité par un journal" and, most conclusively, the size of the board, leads us to believe that this is the game described by d'Allemagne.

Notice that D'Allemagne was not sure either that "Derničres Nouvelles" was a real newspaper.