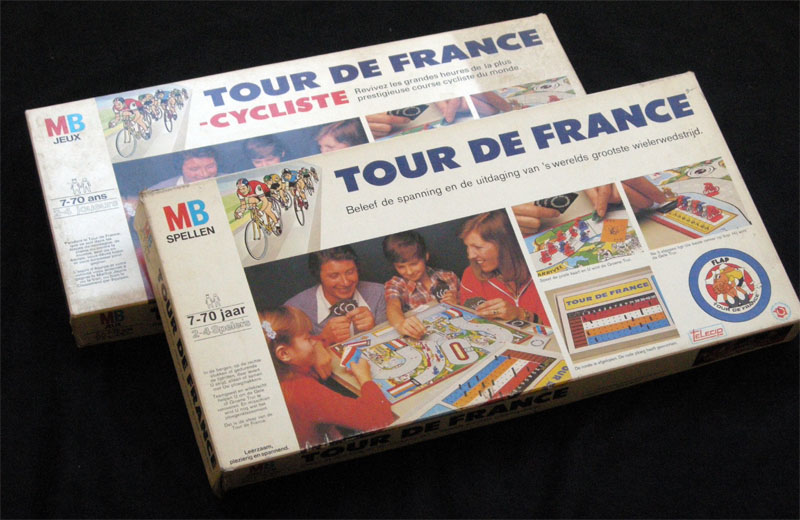 There were at least two editions of this game (French and Dutch) and maybe a German one (/though I can't remember who mentioned it to me). As you can see, the title of the Dutch version is simply "Tour de France" while the French edition is called "Tour de France Cycliste". By the way, since the game features chance (risk, actually) cards, you'd rather get it in a language you can read.

The French game is made in Holland, so, for lack of a better idea, I will consider it a Dutch game until someone proves me wrong (though the name of the game creator does not look Dutch, and of course MB is American). 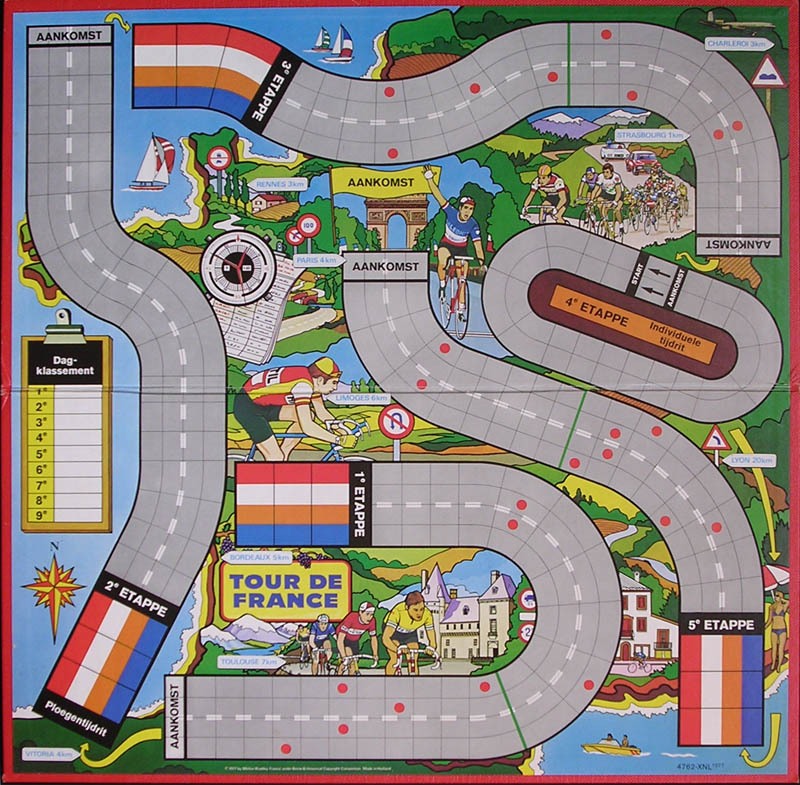 In this game you play a 5 stage race, the second stage being a time trial, and the fourth, an individual time trial.

Each player manages a team of three identical riders, which move by playing cards as the ones you can see below. The numbers on the card mark the move,ment of each rider in the team (the player decides which rider advances which number).  The color on the backgroud corresponds to one of the four teams (blue, white, red, orange: the yellow and green rider are special riders wearing leader jerseys). In case you play a card of your own colour, one of your riders can advance an extra point. Th sprint (3-2-1) cards are not of any of the colours.

In the middle of stages 1,3 and 5 there is a green line, a sort of intermediate sprint. The first rider to cross that line receives the green jersey (immediately replaces his rider by the green rider, which he keeps until another green line is crossed in a subsequent stage) and scores 3 points for the individual classification.

The stage ends as soon as a complete team has crossed the finishing line. Points are scored both for individual and team classifications, and the yellow jersey goes to the rider with most points in the individual classification. 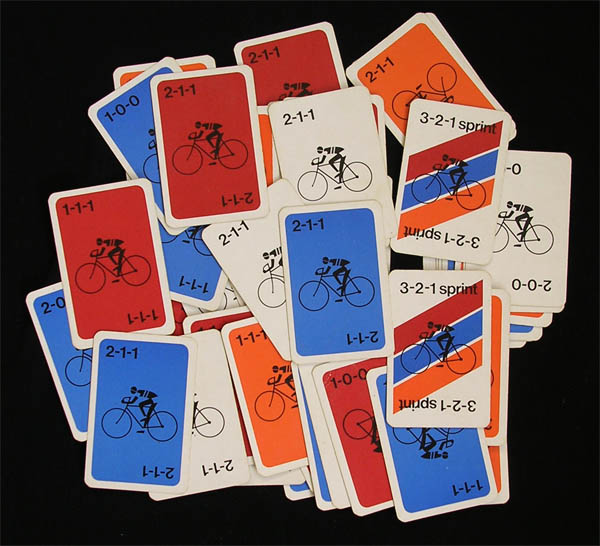 The team time trial is run by all four teams at the same time, one in each lane. Only points for the team classification are awarded.

The individual time trial is run by only one rider in each team (supposed to be the team leader) and uses all the numbers in the cards he plays.

At the end of the 5th stage, points in both classifications are added to find the game winner. 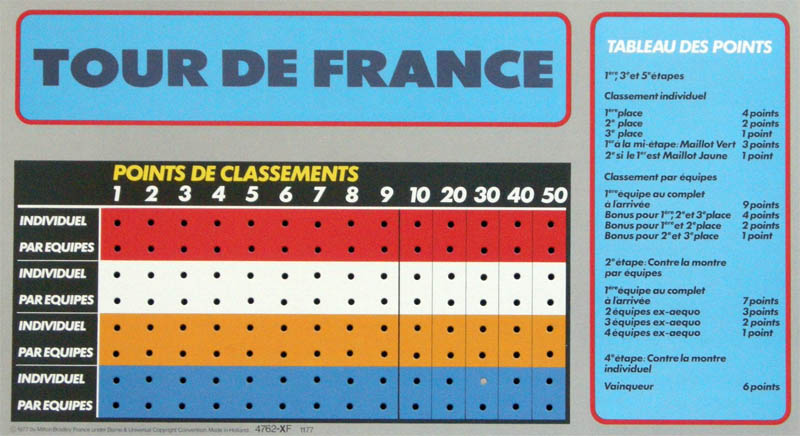 When a rider stops on a red dotted square, he draws a chance card and follows the instructions. There are good cards (blue) and bad cards (red). 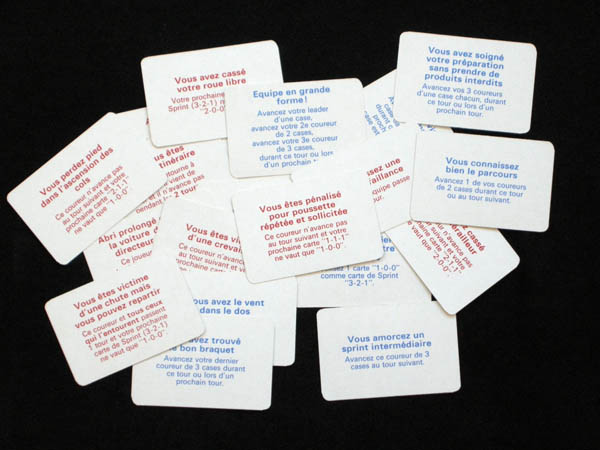 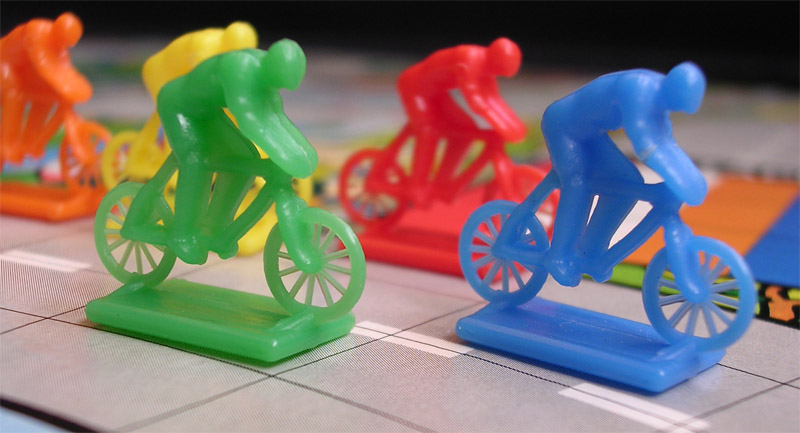 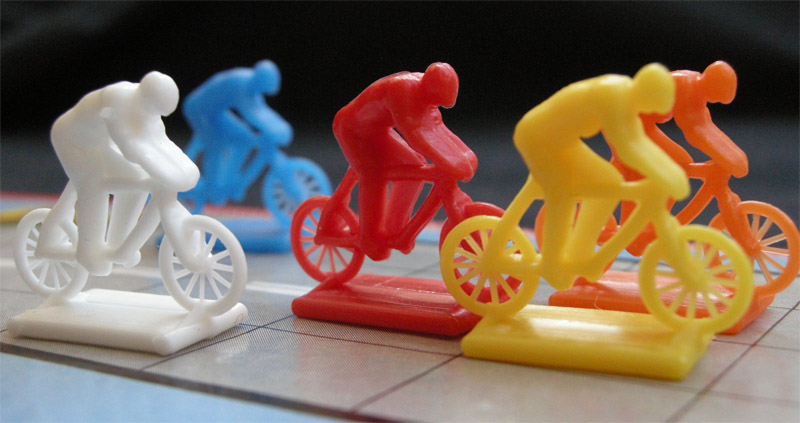