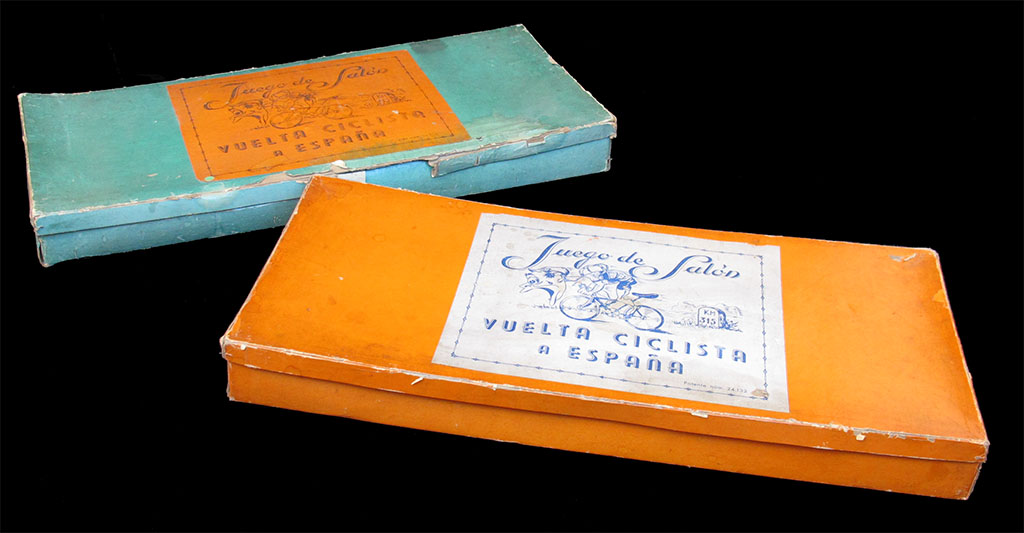 This is one of the most beautiful games in the collection, and one of the rarest. It was probably made in Barcelona (my hometown) but I have only seen three copies of  the game, and I am lucky to own two of the three. As you can see, there were at least two "editions", with boxes of different colour and a label of different colour. By the way, the third copy has the green box with the orange label.

By the way, when I say "one of the most beautiful games" I am NOT speaking of the boxes!

Needless to say, this game is very high in my favourite games list. 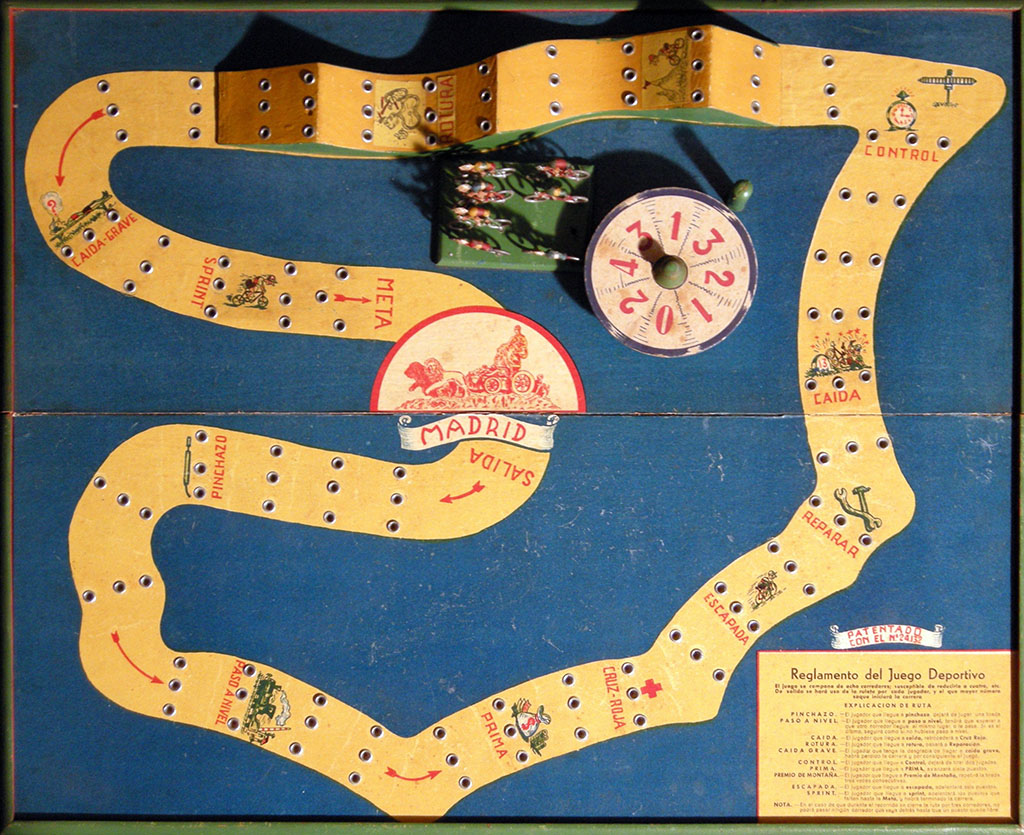 The open board measures 61 x 50 cms It is a two-folded wooden panel with rivets where metal riders are inserted. Riders are moved according to the result of a spinner, and the game is a roll-and-move game (in this case, spin-and-move). The really outstanding feature are the three-dimensional mountains. (33 / 35 mm high),

The game represents the Vuelta a Espaþa. As you can see it starts and ends in Madrid, which only happened in the first 9 editions of the race (until 1950). 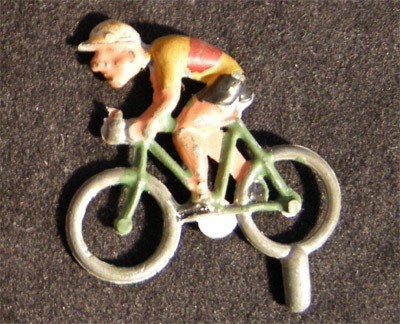 The cyclists measure 37 mm (wheel to wheel).
The maximum height of the figurine (from wheel to cap) is 33 mm and the spigot is about 7 mm long. 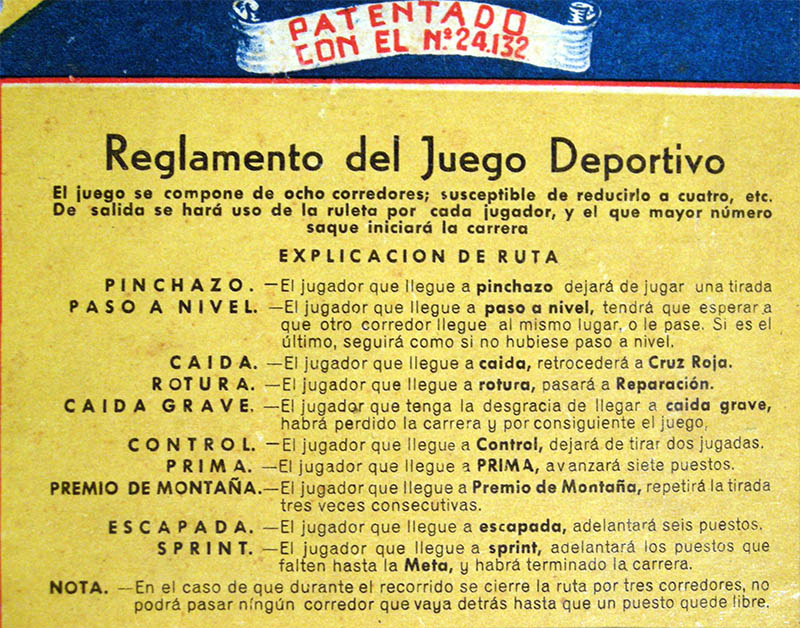 The rules of the are very simple. Even if you don't read Spanish you can see it by their length.

The only not-so-usual feature is that three riders in parallel block the road. It does not state if they also block the road in case of a rider going back to a previous square (from "Caida" -fall- you go back to the Red Cross square; from "Rotura" -wreck- you go back to "reparaciµn"). I guess they don't. 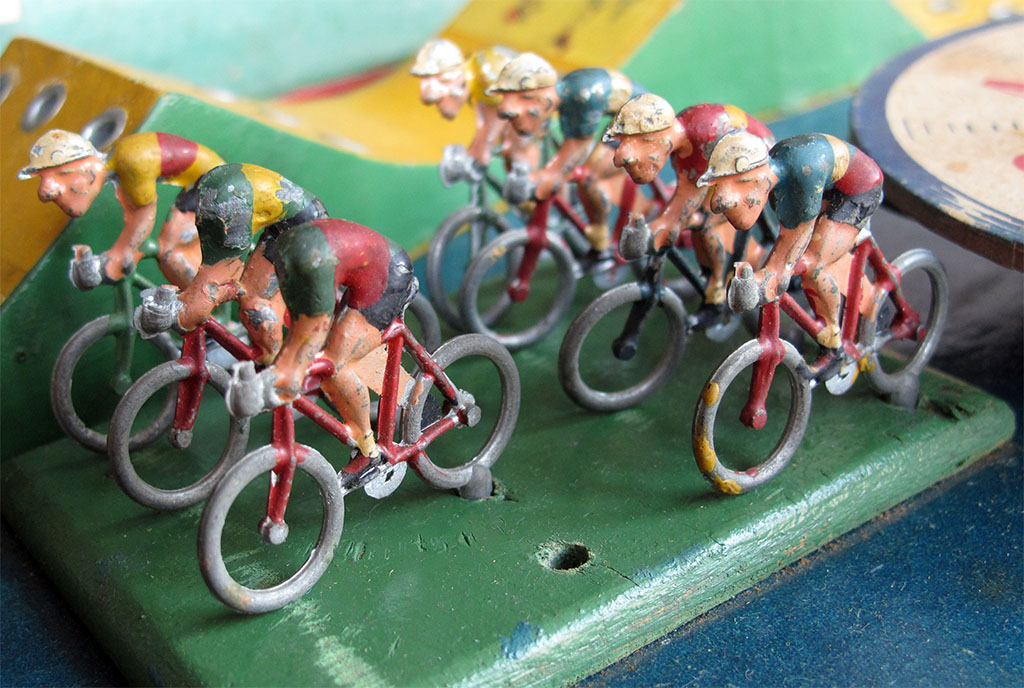 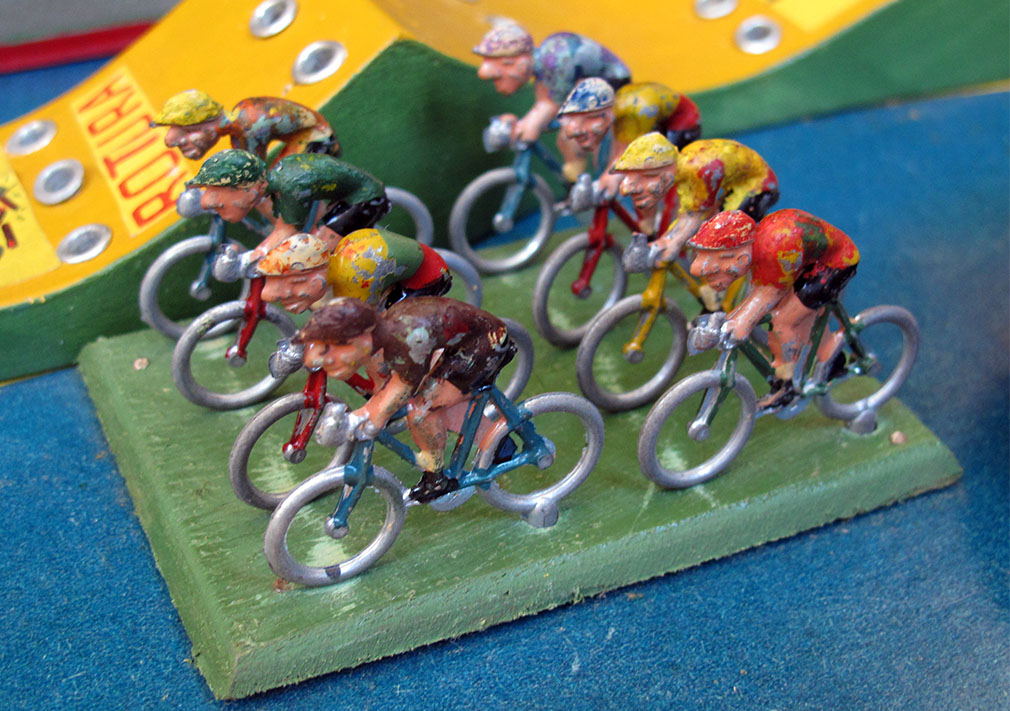 Riders in the orange box.

The cyclists are painted in different colours (the riders in the third box I saw had lost almost all the paint, so I cannot say). As you can see the cyclists in the first picture (green box) are painted more delicately. My guess (and it is only a guess) is that they were made first, that is, that the green box is the first edition. Of course that may be a biased deduction based on that it was the first I got. 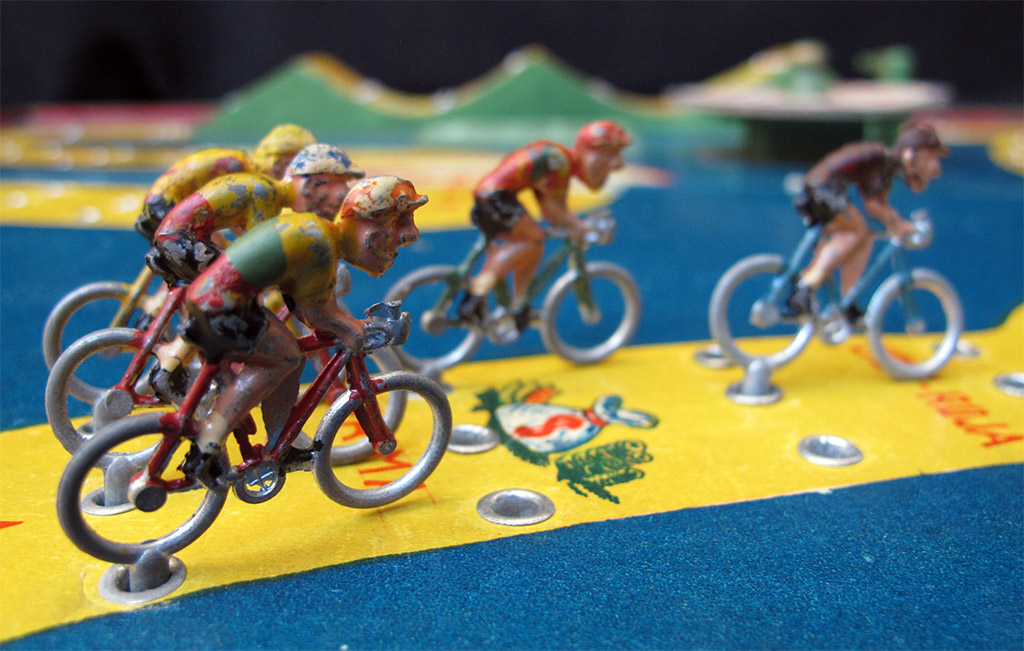 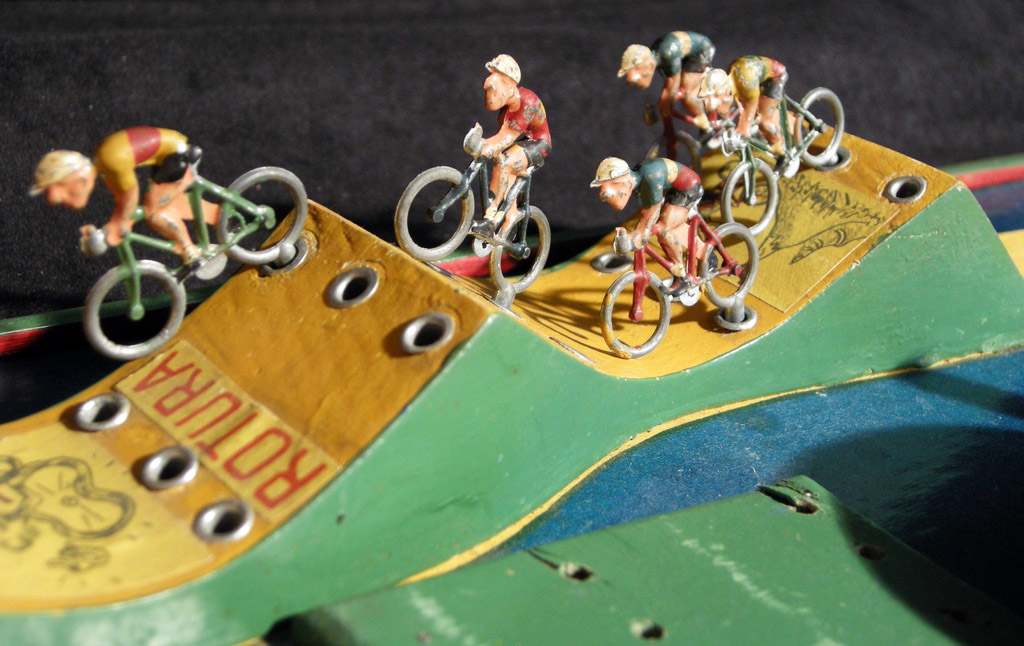 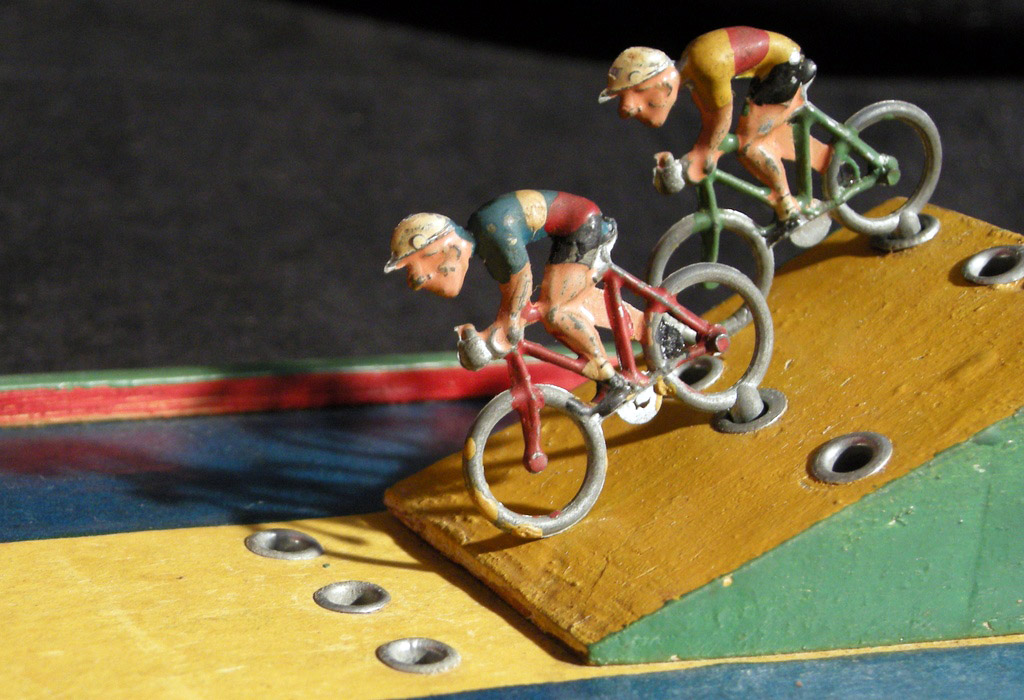 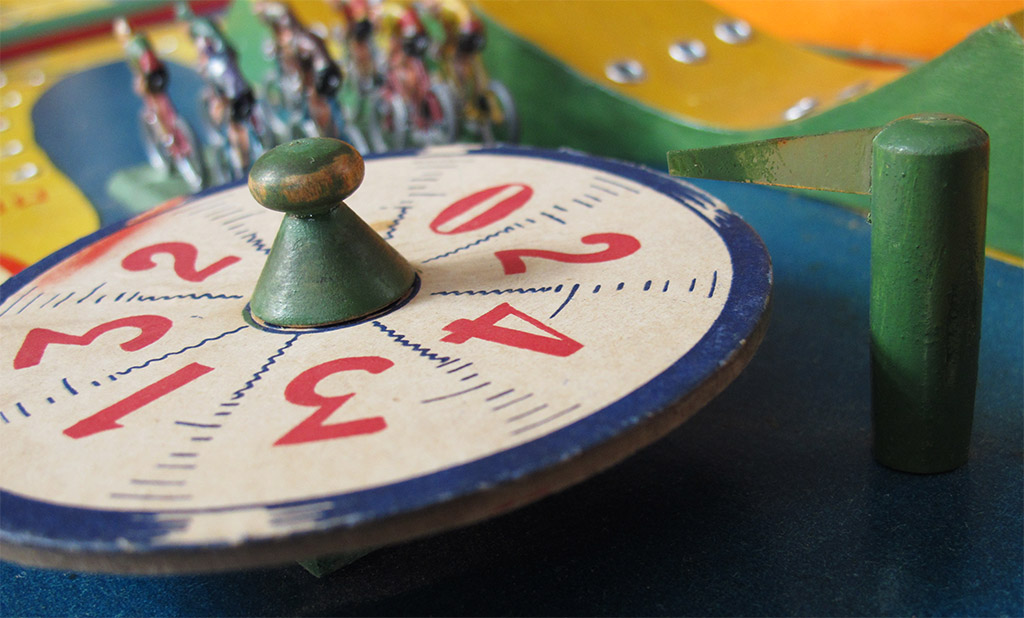 Close-up of the spinner.

British artist Martyn Overs has decided to try and make his own version of the game after seeing it in my website (which makes me really happy). He has sent this picture of the riders he has made. He has glued a spigot to a plastic figure (somewhat bigger than the original), then made a heat proof rubber mould and poured lead free pewter into it. The result is quite good considering it is all done by hand without a centrifuge nor any compressed air injection facilities. I cannot wait to see the result when he eventually makes the board!