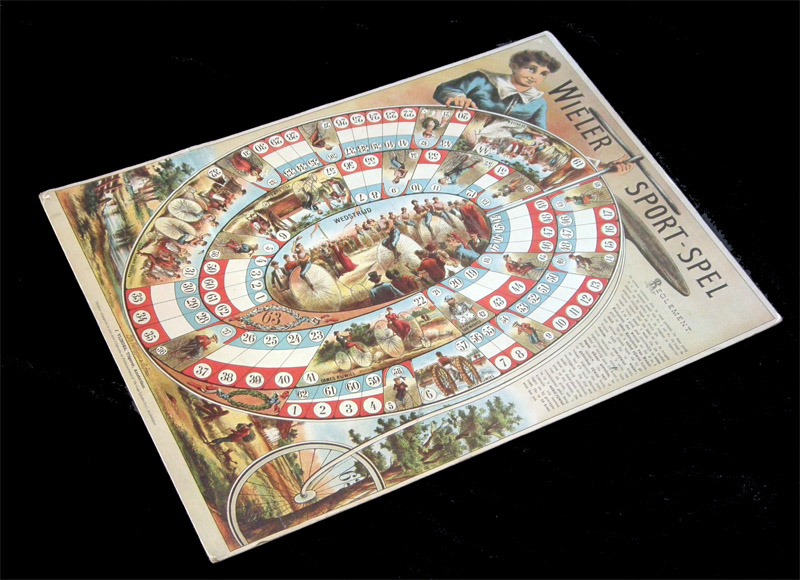 This is a big (57 x 42 cm) modern reproduction of a 1891 Dutch game (you can see the original at the giochidelloca.it website; two slightly different versions, as a matter of fact)). At the bottom of the reproduction you can read "List. Faddegon & Co, Amst." Faddegon & Co is a famous printing company which operated in Amsterdam and made posters and other publicity related items at least between 1886 and 1930. The reissue says "Opnieuw uitgegeven in 1972 door Uitgevers- en Publiciteitsbedrijf 'De Lage Landen b.v.', Amsterdam", which translates as "reissued in 1972 by 'De Lage Landen Co.'


This game is reproduced in Silvia Mascheroni & Bianca Tinti's book Il gioco dell'Oca; Un libro da leggere, da guardare, da giocare and in Adrian Seville's recent book Vintage Board Games. History and entertaining from the late 18th to the beginning of the 20th century (see bibliography). In both cases the reproduction  in the books are too small to be played (or, at least, difficult to play), unlike other games reprinted in both books, but of course the original game was too large to be reproduced at scale 1:1 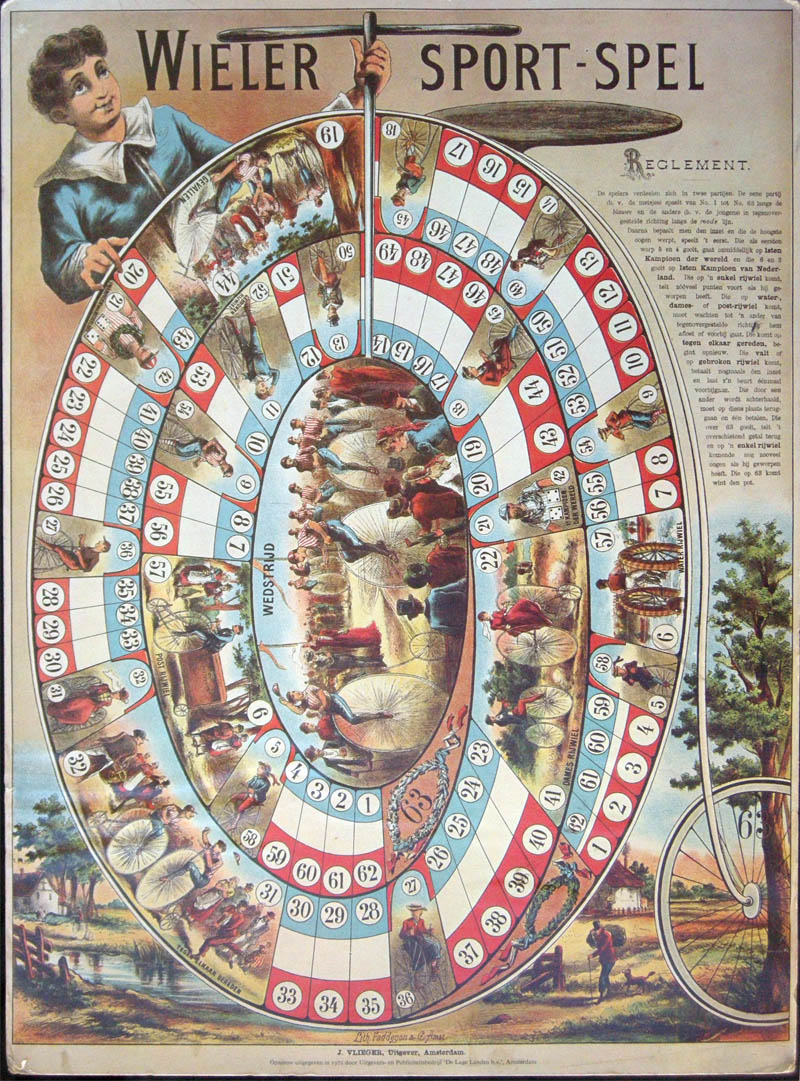 Notice the Dutch and World champion images (see below). The first Dutch National Championships were held in 1888, but the first official World Championships were not organised until 1893. (By the way these were track-cycling events. The most-often cited date of 1927 is that of the first road race world championship for professionals won by Alfredo Binda. The amateur road race world championship was first held in 1921). Of course there were riders unofficially considered "world champions" since the first  cycling races were held back in 1868, but since the date of the game has been established as 1891 by Rob van Linden of the HONGs Archive, the rider displayed on square 21 cannot have been the official world champion (see below for discussion). 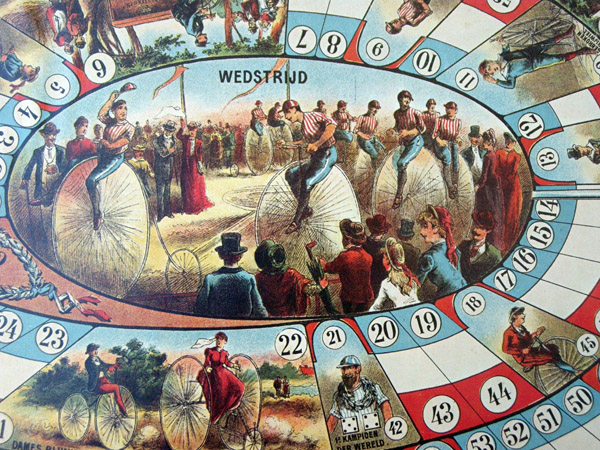 By the way, even by 1888, the high-wheel bicycles pictured in this game were anachronistic.  By 1891 cycling races were generally run on modern bicycles (with the two wheels of the same size). In 1888 Charles Terront won the French Championship on a high wheeler and in 1889 he won again, only this time on a modern bicycle. 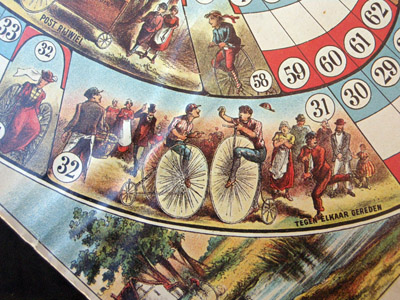 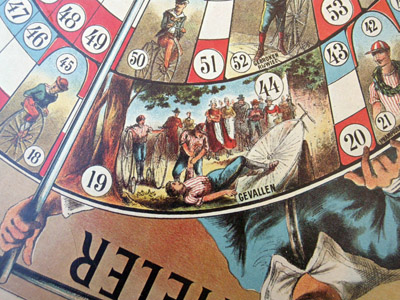 Not only anachronistic but dangerous 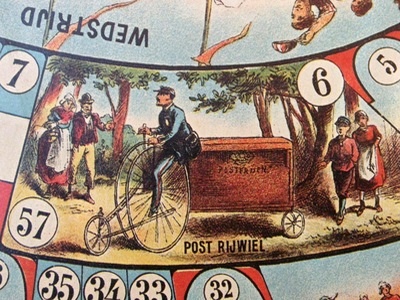 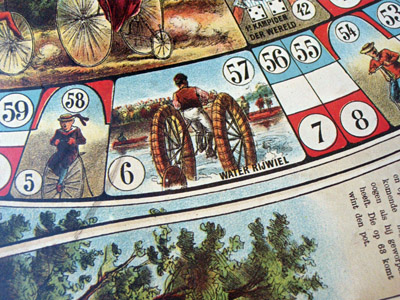 These are even older, at least the one on the left . The one on the right looks like a Pinkert Navigating Tricycle (patented in 1891). Thanks Adrian for the information!

Adrian Seville recently emailed me recently asking my opinion about whether the riders displayed on the board as world and Dutch champions represented actual champions of were product of the artists imagination. This seemingly innocent question produced an email exchange (which included Rob van Linden, of the Historisch Overzicht Nederlandse Gezelschapsspellen, and Fred Horn, of the Flemish Games Archive) that not only made me rephrase the paragraph above about world championships but was interesting enough to reproduce (parts of it) in length.

According to Andrew Ritchie's book "Early Bicycles And The Quest For Speed. A history 1868-1903" (2011), the first official World Championships were held in Chicago in 1893 (as you had already found out). I will have to read the whole chapter again to find if he mentions possible unofficial championships held before that. Pierre Chany, in his monumental "La Fabuleuse Histoire du Cyclisme" (1975) also gives results for track cycling world championships only since 1893.  By the way, the 1893 and 1894 championships were only for amateurs, while the Köln Championships in 1895 had "amateur" and "professional" categories. Furthermore, there were at least two races (thus two world champions) in each category, "Vitesse" (sprint) and "Demi-Fonds" (100km long paced races; riders were not paced by motorcycles at the time but by tandems, triplets, quadruplets ...) The 1893 champions were Zimmerman (sprint) and L.S. Meintjes from South Africa (demi-fonds). However, Meintjes is not the bearded champion displayed on the board either. I see the wikipedia has results for a third race (10km) but since  it was also won by Zimmerman I haven't investigated it.

On the other hand, since there is also a Dutch national champion on the board (field 21) I have also checked the Dutch Championships. Pierre Chany only gives the list of Netherland National champions from 1892 on, but the site Mémoire du Cyclisme goes as far back as 1888.

The 1891 Dutch national champion was Carel A Koning. He could be the guy displayed on the board, but anyone without a beard could. I have on my desk James McGurn's history of  cycling at the moment and the moustached guy on the cover could also be the one on the board. (No, he is not: the picture is from a French advertisement for the Cyclone chainless bicycle).

As for Hendrik Raland, the 1890 Champion (the game may be of 1891 but the Championship might not have been held yet at the date of printing, thus the current champion being that of 1890), unfortunately there is no picture of him.

The problem with official and unofficial championships at the time was the fight between French and British Cycling Associations over amateurism, which was a very classist issue. The rich British amateurs did not want to race against the professionals, who came from the  working-class and who usually won the races, not because they were professionals but because they were stronger since they worked in the mines, factories or fields. British amateurs were banned if they ran against professionals, or even against anyone who had raced against professionals. The French were less scrupulous (or less rich) and did not mind. So it was very difficult to organise international races, let alone "world championships". However, I have checked the cyclingarchives website (not an easy one to browse) for every possible race run on 1890 or 1891 that could be considered a kind of unofficial world championship, but I have not found any plausible candidate.

Which poses a question: how sure can we be that the game is effectively from 1891?

To which Rob van Linden clarified:  The game is definitely from 1891, showing from an ad in several papers that mention the first edition of the game in that year. The ad is included in the HONGS-record. 'Pas van de pers' means: just released. 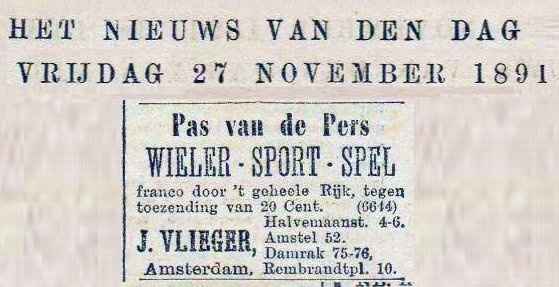 Rob added: There is some misconsensus about what is officially the first world championship for cycling. In Dutch there is a clear difference between 'wieler sport' and 'wielrennen'. The former is older and actually had its first 'world' championship in 1868, won by the English cyclist James Moore. This person did however not have a beard either, so I guess the picture on the game could be some free interpretation of the artist, or perhaps it refers to another so called "1st World Champion".

I agree with Rob that the expression "world champion" can have different meanings, and even more if you write it behind the word "unofficial".  What I am not so sure of is that James Moore could be considered "world champion" in 1868. He won a race in Paris' Parc de St Cloud  on May 31st, 1868, which was for a long time considered to be the first cycling race ever (not the world championship, but just the first race, or at least the first well-documented race, since it is not so clear now that there had not been other races before). I reread Andrew Ritchie's chapter on early races and found the following: "Most contemporary  British accounts of cycling in the 1870s asserted the superiority of the English bicycle industry and the dominance of British athletes, but this assumption was, of course, challenged by the French, creating a long-standing sport rivalry. One of the leading 'French' competitors, James Moore, who won important races in France and was featured in unofficial 'world championships' (using technologically advanced bicycles by French maker Meyer and Paris-based English maker Charles Garrard), was in fact an English expatriot based in Paris. Between 1870 and 1877 Moore won four of these 'championships' (1870, 1874, 1875 and 1877)." (Ritchie, Andrew. Early Bicycles And The Quest For Speed. A history, 1868-1903. 2nd ed. Jefferson NC : McFarland & Co, 2018, p.141)

I also agree with Rob that the person displayed on the game does not look like James Moore.

Pierre Chany's lesser known (but also monumental) book La fabuleuse histoire des grandes classiques et de championnats du monde (1979) mentions a long-distance "world championship" organised in Leicester in 1883. Actually, it was more an Anglo-French match than a world championship. According to Chany, since the first race was won by a Frenchman, Frédéric de Civry, three more races were organised until the title was awarded to Fred Wood in 1884. Chany mentions other races labeled "world championship" prior to the Chicago 1893 "official" championship, including two more championships in Leicester (1885 and 1886), two in Birmingham (1888 and 1889, the latter being a road race) and one in Frankfort in 1890.

Following this thread I have browsed the usual databases (cyclingranking.com and cyclingarchives.com) and found that some other "world championships" are mentioned while some in Chany's list are not. There are even pictures of some of the winners of these races (though there are not in most cases) but I have not been able to find a bearded rider. I have also browsed Ritchie's book and James McGurn's On Your Bicycle. An Illustrated History Of Cycling and, again, I have not seen any racer that could be the one on the board. It looks like there were not many bearded cyclists at the time (as opposed to a lot of mustachoed ones). Closest candidate so far: https://hdl.huntington.org/digital/collection/p16003coll4/id/1601/   ;-)

So I guess  Rob's supposition that it could be a free interpretation by the artist  it is the best explanation we have if we cannot identify the cyclist. This is also the opinion of Fred Horn (since I said he was also in the email exchange, I might as well mention him). What do you think?  Are the riders displayed on the board artist's interpretations  or are they some unidentified actual racers? If you can identify them (was one of them your grandfather?), or have something to add, please let me know.

Thanks to Tiny for finding this game.