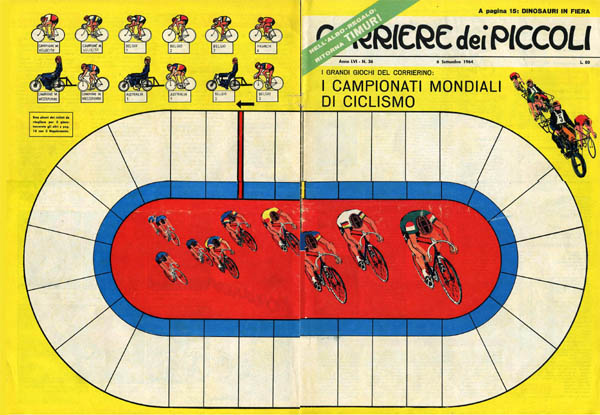 This one was offered on september 6th, 1964. At CDP, they were not original with the names of the games, but they were with the rules. With all its simplicity, the "Velocitŕ" (Sprint) race included here is one of the best track cycling games ever.

We have a track of 30 squares, 18 cyclists plus 9 teams composed of a cyclist and a derny. One regular D6 die is needed. We have two different races, Sprint and Motor Pacing.

This race is run by two cyclists. (18 riders are provided, though: a tournament is played in different legs).

Both riders start at the same square and the race will last one lap. Who goes first is drawn by lot. The rider ahead always throws first and is at disadvantage. If the number thrown is even, the cyclist is advanced the full number shown on the die. If the number is odd, though, it is not necessary to advance the full number. A rider may even stay “sur place” (no advance), trying to be overtaken by the other rider. If both cyclists end their turn on the same square, the rider who was first has the right to play second.

The second rider may double his move at any moment in the race, to start the final sprint. From this moment on, all numbers shown in the dice will be doubled (for both riders) until the end of the race. The winner is the one who goes further past the finishing line (the turn has to be completed). In the case of a tie, an extra turn is thrown.

According to the rules, the race could be run by three riders. Unfortunately, “for the sake of simplicity”, only the rules for two riders are explained.

The lenght of the race is decided beforehand, preferably 4 to 8 laps. Any number of teams (composed of a cyclist and a derny) can take part in the race (9 are provided).

Phase 1: The race start with the dernys. In this part of the game they move with a single throw of the die (the player ahead moves first all through the game).

Phase 2: Eventually the dernys overtake their teammates. At this moment, the derny will stop and wait for the cyclist to couple with it. The next throw of the die is for the cyclists who will try to place himself just behind the derny (if the throw is too high, the pips in excess are neglected).

Phase 3: When the cyclist and the derny are coupled, the move is as follows: The dice is thrown twice for the movement of the derny. The player decides if he wants to use the complete throw or less. Then he throws the die once more (just once), he adds seven to the result and moves the rider that number of squares or less, leaving it coupled with the derny. If the cyclist loses contact with the derny, the latter stops and the cyclist will have to move with just one throw of the die (as in phase 2) until he catches the derny.

To win the race the team must cross the finishing line coupled. (The rules fail to state, though, what happens if the first team to cross the line has lost contact).