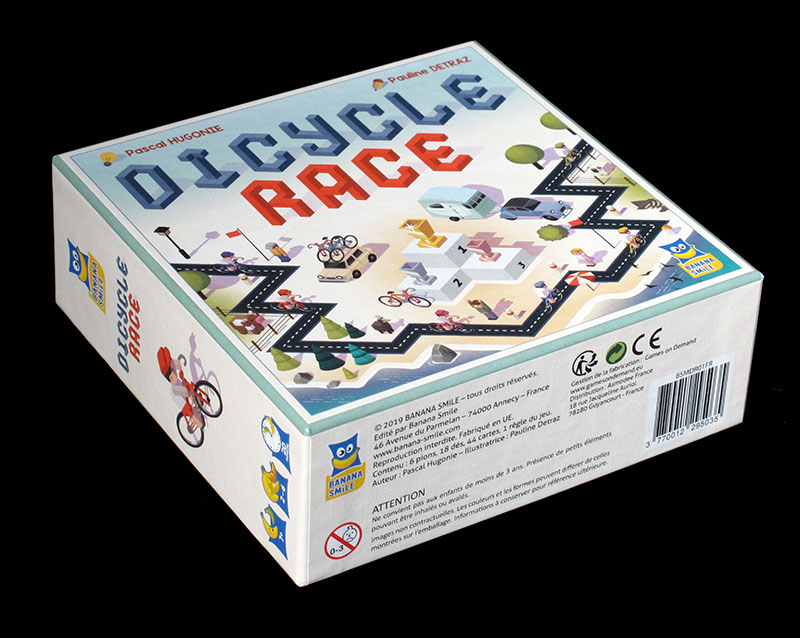 This is a small (the box measures 14.5 x 14.5 x 5.2 cms) dice game devised by Pascal Hugonie and illustrated by Pauline Detraz. The mechanics are extremely simple but quite clever. Although the game depends heavily on luck, there are some strategic choices to be made, and in the end the game system represents surprisingly well a bicycle race.

These mechanics are based on 18 dice in three colours and 36 cards with different dice combinations. A number of cards (the game suggests 12, but then there are different playing modes and variants) are laid on the table to form the stage track. A "podium" card is added to the end of the track to mark the finish line. In his turn a player chooses 6 dice among the 18 available (this is when he makes strategic choices), rolls three times trying to make the dice combinations in the following cards. At the end of his turn he moves forward as long as he has made the combination required in each card.

By the way, if you look closely at the side of the box you may notice that the game has 44 cards. It is true, but unfortunately there are seven useless cards in the lot (6 are unnecessary colour cards to remind the players which is their colour and the seventh is Pauline Detraz's business card).

You may also notice that the side of the box says that game was copyrighted in 2019. However, I am quite sure the release date is 2020.

A sample track, 12 cards long. The podium card is the rightmost one. The road goes up and down without it having a neat relation with the difficulty (see below).

In this close-up you can appreciate the cards better.

In the pictures above I have placed the riders beside the cards, leaving the space on the cards for the dice, but I could have made it the other way round (which is what the rules suggest). I got my setting from one of the instructional videos on the game.

The cards are classified in three levels of difficulty, marked by the colour cube on the back. Cards with a green cube are the easiest to fulfill.  They would represent flat terrain on a bicycle race. Their requirement can be met with only one die, so that six of them could be advanced in one single game turn (though you need really lucky throws).

The bottles on the bottom right corner represent the colour of the dice you need. The conditions required for the cards above, from left to right, are a red 5, a blue 3, and a yellow throw under three (that is 1 or 2). You probably get the idea. 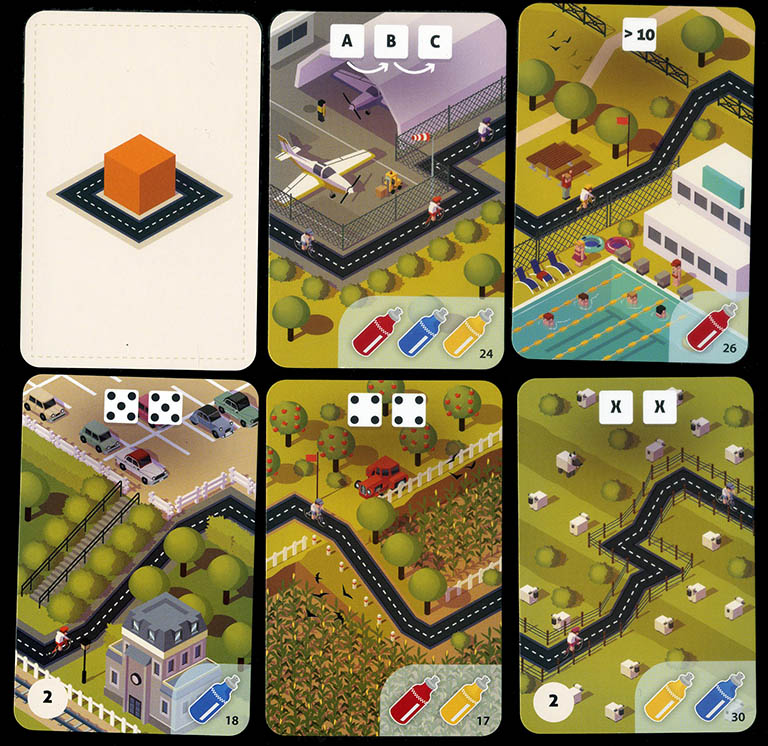 Cards with an orange cube are somewhat more difficult. They represent hilly terrain and need two or more dice to be fulfilled.  The examples above are: a pair of blue 5s, a red 4 and a yellow 4, a yellow die and a blue die with the same number, any number of red dice adding up to 11 or more, a suite of three dice of different colours with consecutive values (123, 234, 345 or 456). You probably have guessed with card is each.

The numbers in the white circles are an optional rule. They represent the maximum number of riders that may stand on a card. If the card is full, a rider may advance past it, but shall not end his move on it. There are some cards with white circles without a number. Players can agree to put any number on those, but this is even more optional. 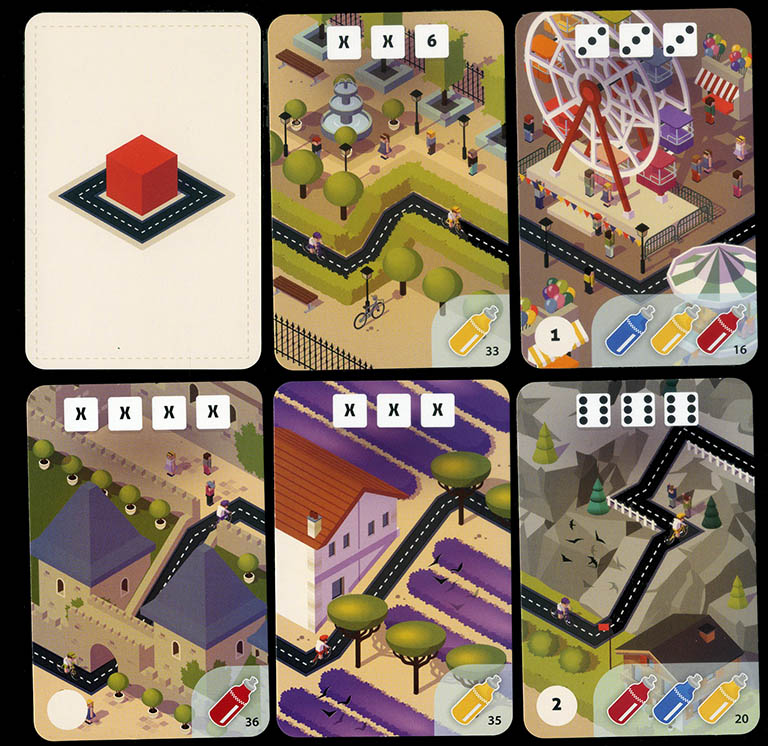 Cards wit a red cube are the most difficult, requiring at least three dice to meet their requirements. They represent mountain passes. By the way, I would have preferred that the otherwise cute drawings by Pauline Detraz had reflected this: if the road in all the red cards had "gone up" (as in the three cards of the bottom row in the picture above), all orange cards had been "flat" (like the two cards in the upper row) and all green cards had been "descending" (as the three green cards pictured above), players could have a clearer idea of the difficulties of the race just by looking at the laying of the cards on the table.

However, there are a couple of cards which are ambiguous. Card 31 means "a pair AND a 1" but it is not clear if it means "a red pair and a yellow 1", "a pair with a yellow and a red dice AND a 1 of one of these colours" or "a pair and a one with red AND yellow dice". I personally prefer the latter because it is easier. 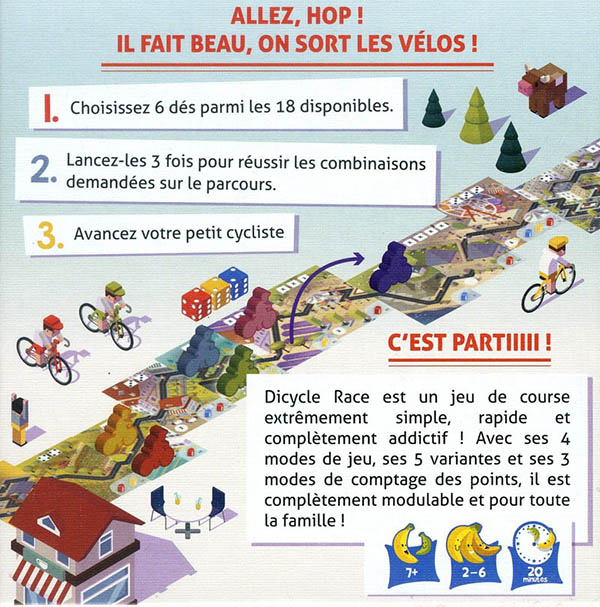 As you may have understood by now, the track is fully modular, you can make your own stages, longer or shorter, and you chose the level of difficulty. The rules offer three simple scoring systems, one of them for a stage race. You can play a full Tour de France if you wish. (By the way, although the title of the game is in English, the rules are only in French).

I would not go so far as playing a full Tour de France, but still this game has become a kind of personal favourite in a few plays and it is helping me in these confinement days. Thanks, François, for sending this one!