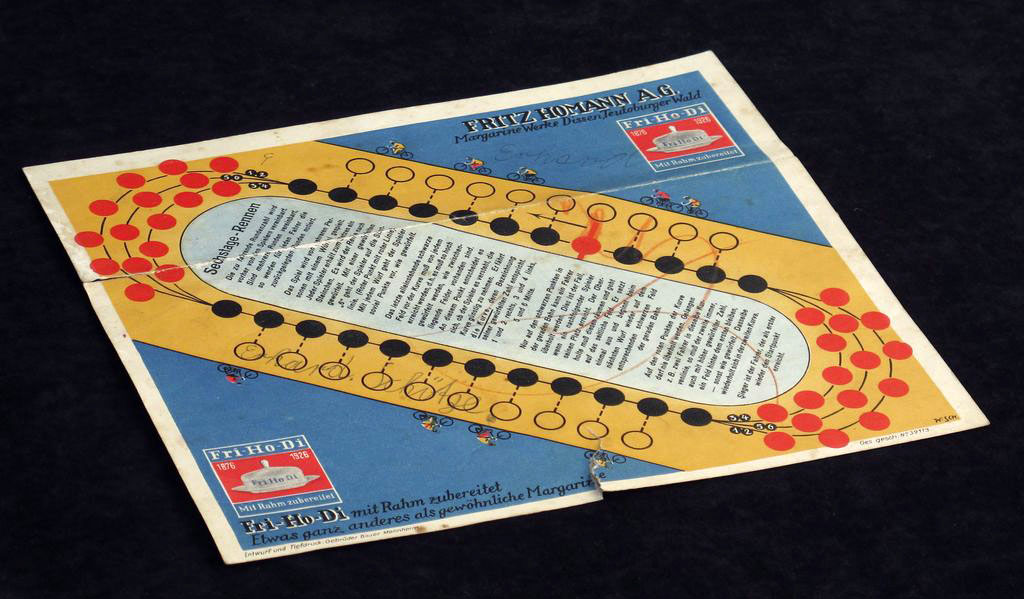 Promotional game for Fritz Homann's Fri-Ho-Di margarine. Fri-Ho obviously stands for "FrItz Homann, and "Di" is for Dissen am Teutoburger Wald, where the company is located. 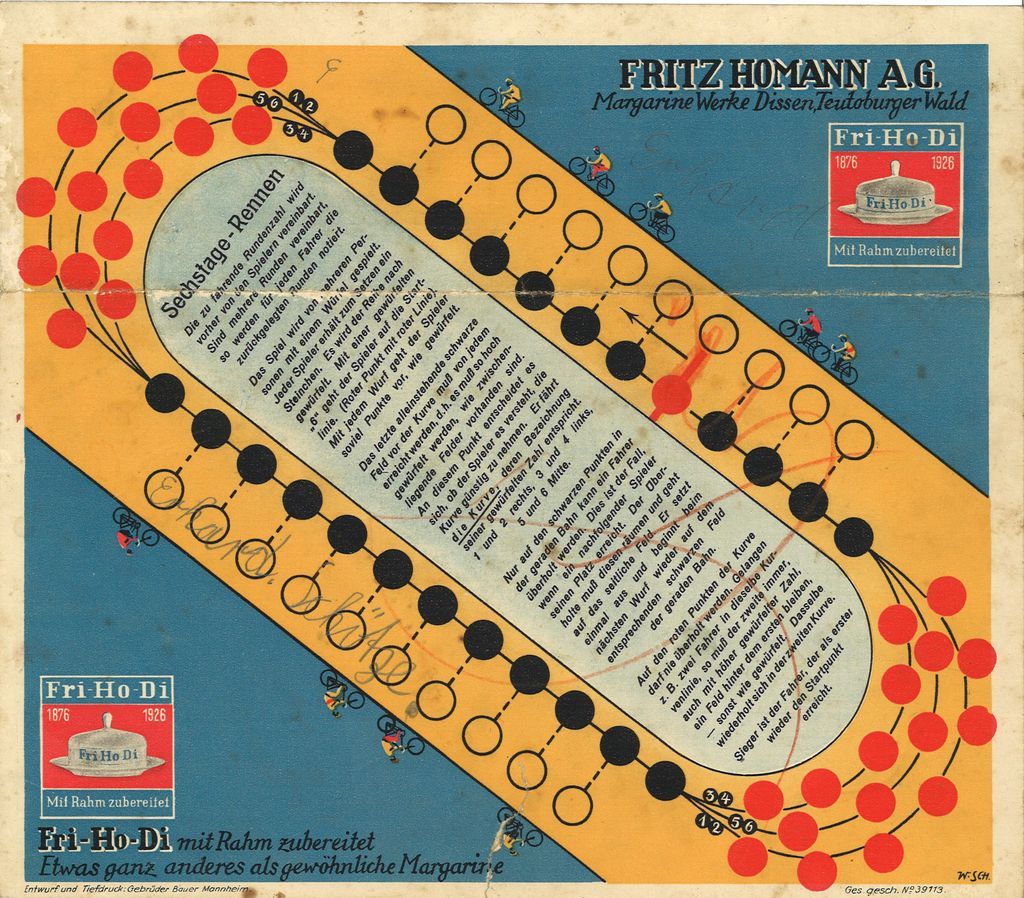 As you can see, some kid named Erhard laid his hands (and pencils) on the game. It could use some cleaning... 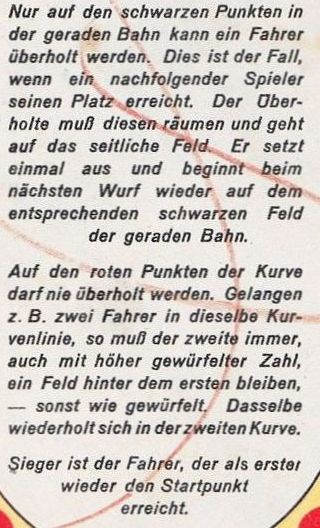 For those of you who do not read german, here is a summary of the rules:

- Number of laps is agreed.
- Play with one D6.
- One counter/rider for each player.
- Number of players not stated (but obviously not too many...)
- Decide first player and the roll round the table (not in the order of the race).
- You need a six to start the game.
- You must reach exactly the last black point before each curve.
- Next throw decides how you take the curve.
- You can only overtake on the straights (black dots).
- The overtaken rider moves to the neighbouring white dot, misses a turn, and resumes the race from the black dot.
- No overtakes on the curves. The rider behind will stay behind losing any extra pips.
- Winner is the first to get back to the starting point (after the agreed number of laps, one must assume).

A few things are not so clear:

- Overtaking in straights with a higher number. Is it allowed? (Why not?)
- What happens when a third rider reaches a black point where there are already 2 riders? (My guess: he just stays behind, as he would do in the curves).
- What if the overtaken rider cannot get back to the inner lane (black point) because a third rider has reached it? (My guess: he misses another turn).

These riders are small but quite cute 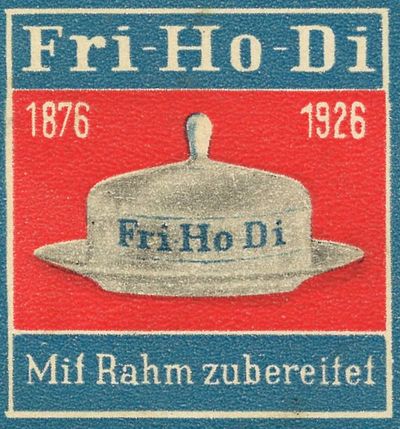 It looks like the game was released in 1926 to commemorate the 50th anniversary of the company. Of course it could have been released a few years later, but not too many. By the way, that company still exists and still is in the dairy products' business. Here is their website. 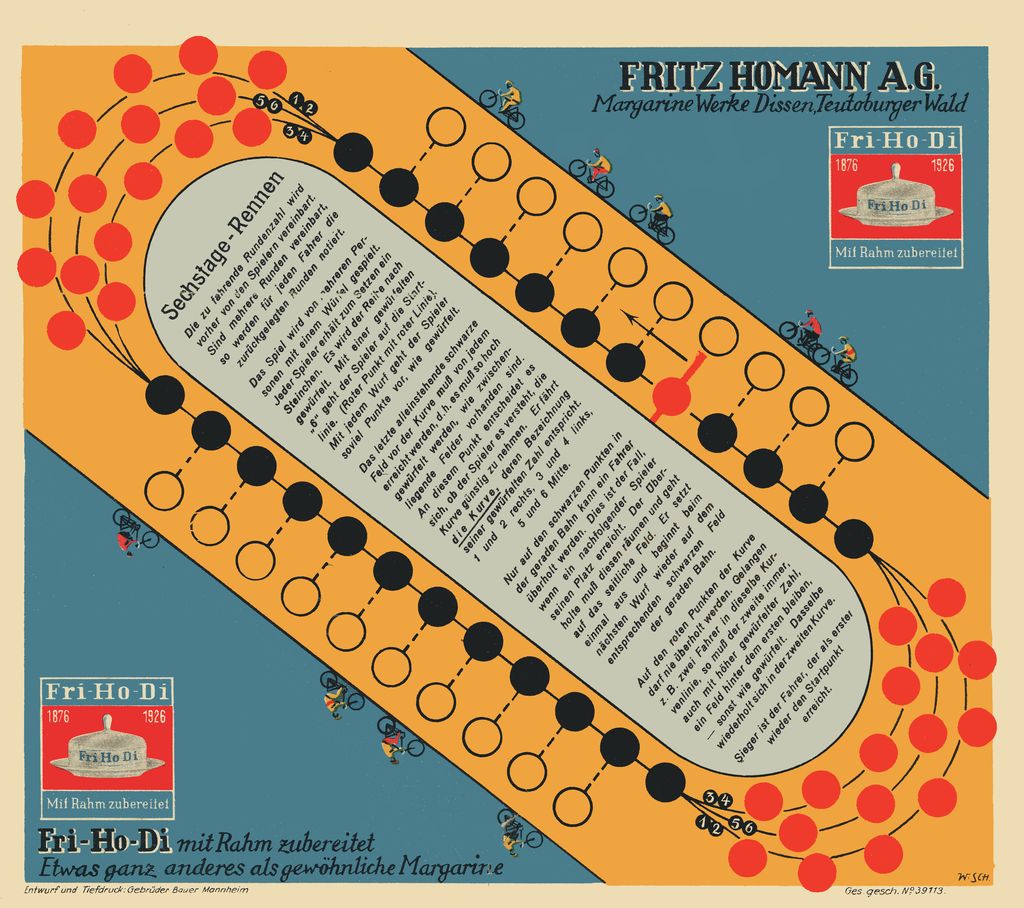 Who said the game needed cleaning? Work in progress!

Thanks Stephan for the tip that led me to this one!