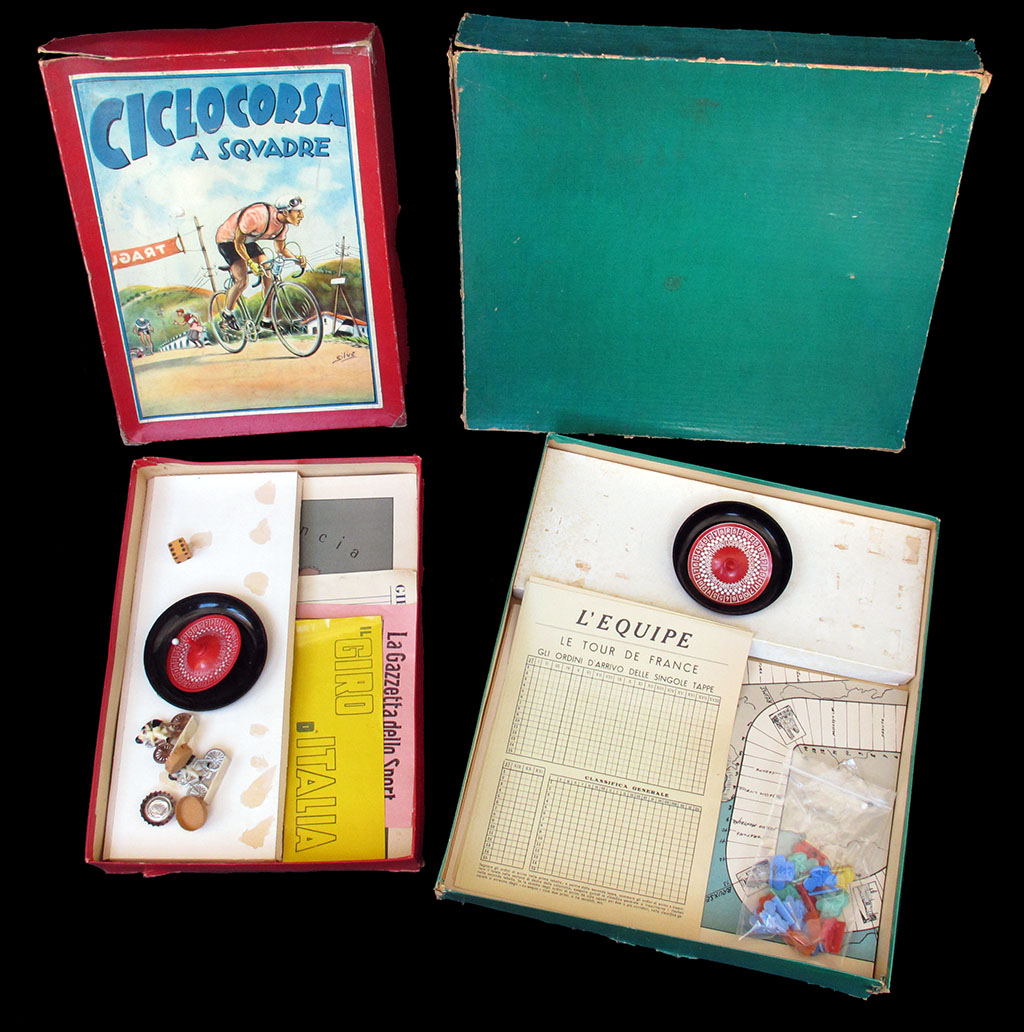 When I received the green box, some five years ago, I found it quite hard to classify. It did not even have a proper name and I could not identify the maker's logo. The box was just plain green without any identifying mark on the outside. Glued to the bottom of the box were the game rules "Giro d'Italia e di Francia", but there was no trace of the Giro d'Italia. There was only a board labeled "Tour de France", and yellow score sheets marked "L'Équipe". Furthermore, the rules mentioned that there were 5 teams of three riders each in the game, which there were, plus a rider in the "maglia rosa", which I did not have. Instead   I had a "maillot jaune" rider.

My guess, then was there was another version of this game with Giro d'Italia, one with a pink rider and probably a pink score sheets marked "La Gazzetta dello Sport". I wrote "Of course it is just a guess, but anyone wants to bet?"

I was quite right.

I have found the "Giro d'Italia" game, at least part of it, but now we have a new mystery a new mystery unravels. I have just received a box for a game called "Ciclocorsa a Squadre" with the contents of the Giro d'Italia games as expected, including a pink score sheet marked "La Gazzetta dello Sport" (did anyone take my bet?).

Here my first thought that the contents of the game had been stocked in the box of another unknown game (and it is still my best guess) but the problem is that they fit so well that I am not really sure. We could also think that the contents of the green box had been placed in a different box (the original might have been lost or damaged) since it is really unusual to have a game in a plain unmarked box, but again they fit too well and then the rules are glued inside.

So the mystery remains (albeit now it is a different mystery).

(*) "Obviously" but may be not really: scroll down until the end of the page for more about this 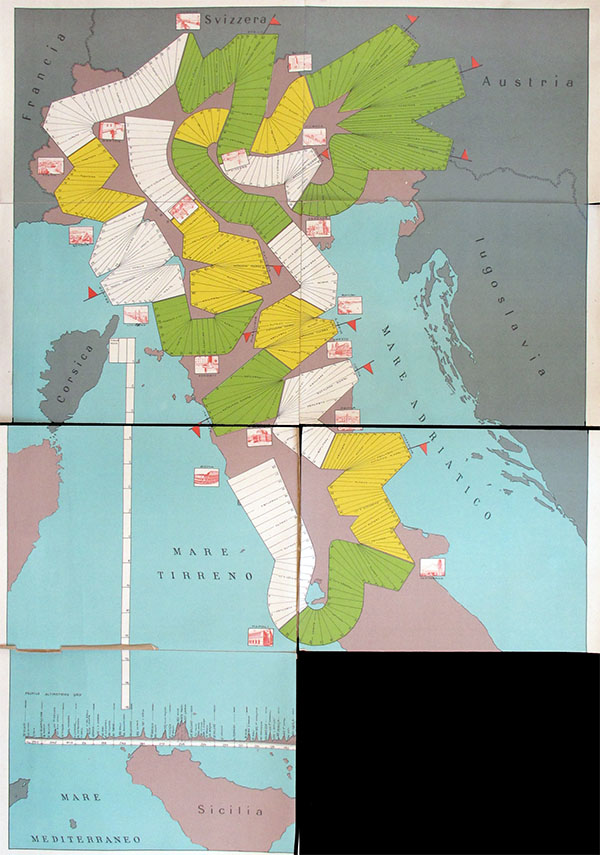 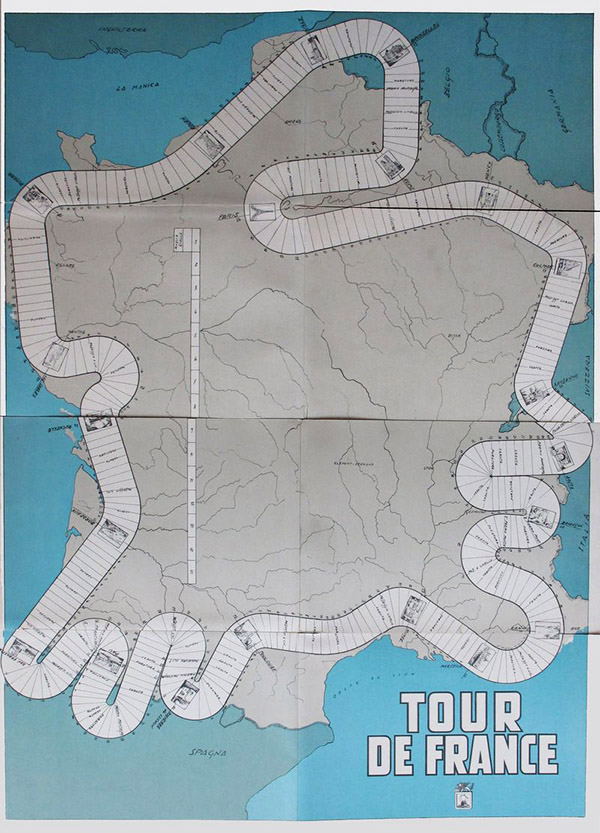 The boards are quite big. They measure 101 x 71 cms each and are composed of two panels of light cardboard. It is hard to keep them flat, as you can see in the pictures, but fortunately the riders (which are quite small, only 28 mm long) are very stable and this is not a problem to play the game.

The most obvious difference between them is chromatic: the Giro board has stages of different colours. However, this is not mentioned in the rules. The different colours are just a visual aid to know where a stage begins and ends. They also make a nicer board.

The disposition of the road is quite strange in both cases. The central part of the Tour de France board is empty, and the bottom quarter of the Giro d'Italia is useless too (which is a chance, since one of the panels is missing in my copy).

The course of the Tour is followed counterclockwise, starting and finishing in Paris, and the stages represent almost exactly those of the 1949 Tour de France, including a stage in San Sebastián, which was the first stage finish in Spain (and there would not be another until many years later). However, there are a couple of differences with the 1949 Tour: the stages at Boulogne Sur Mer and Saint Malo have been replaced by Lille and Dinard. Since these two were part of the Tour of 1950, my guess is that the board design was completed sometime in 1950 but probably started in 1949 (or, at least, the designer had the information of the 1949 Tour on the desk).

The Giro d'Italia, starting in Milano and ending in Rome, follows exactly the stages of the 1950 Giro d'Italia. 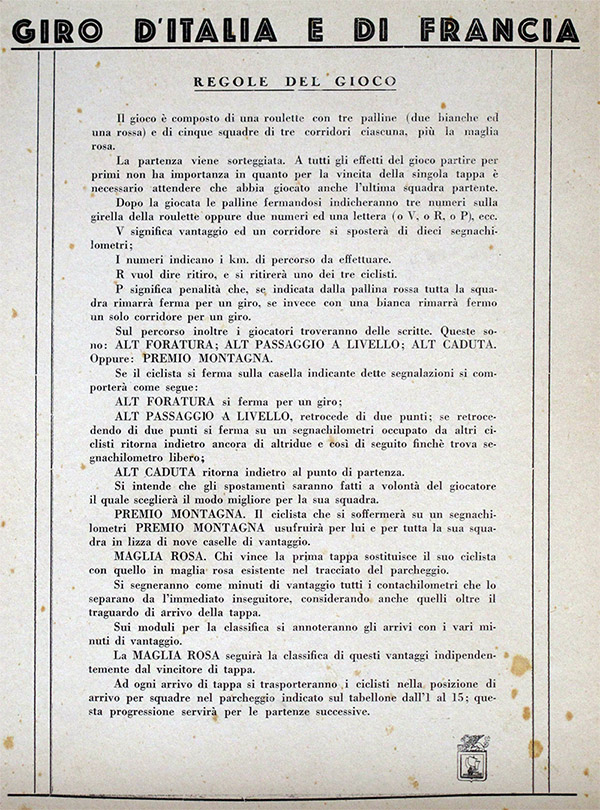 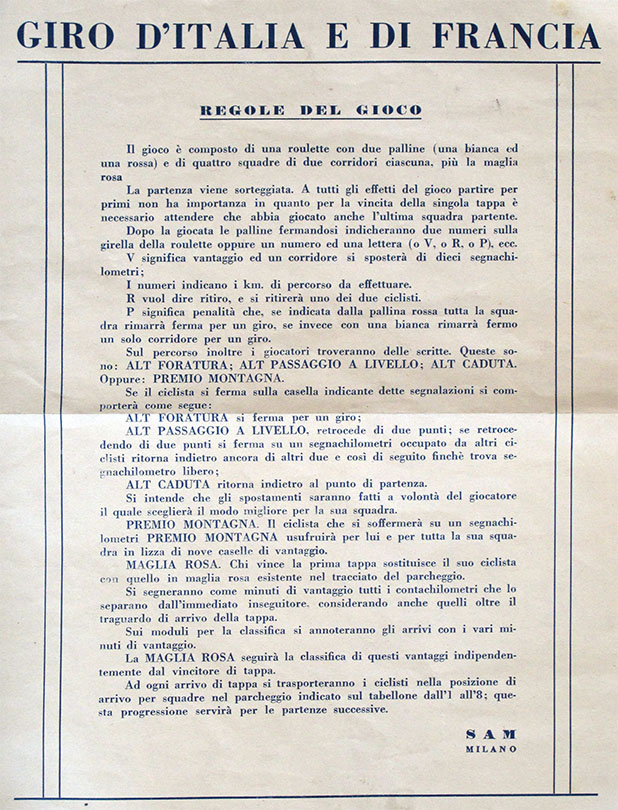 On the left, the rules glued to the bottom of the green box (therefore, found with the Tour Game). On the right, the rules found with the Giro game (as a separate sheet). It is interesting to notice that both rules refer to the maglia rosa (instead of the yellow jersey or "maglia gialla") .

The only significant difference is in the first sentence. In the Tour de France game there are five teams of three riders and the game is played with three balls in the roulette (two white balls and a red one). On the other hand, the rules found with the Giro game mention four teams of two riders and only one white and one red ball. 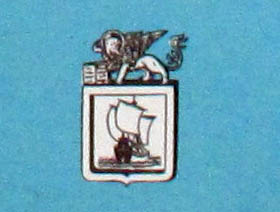 Then there is this mark found on the board and rules of the Tour game, and replaced by "SAM Milano" on the Giro rules. I do not remember seeing it on any other game, but maybe you have better memory or more games. Can someone help? 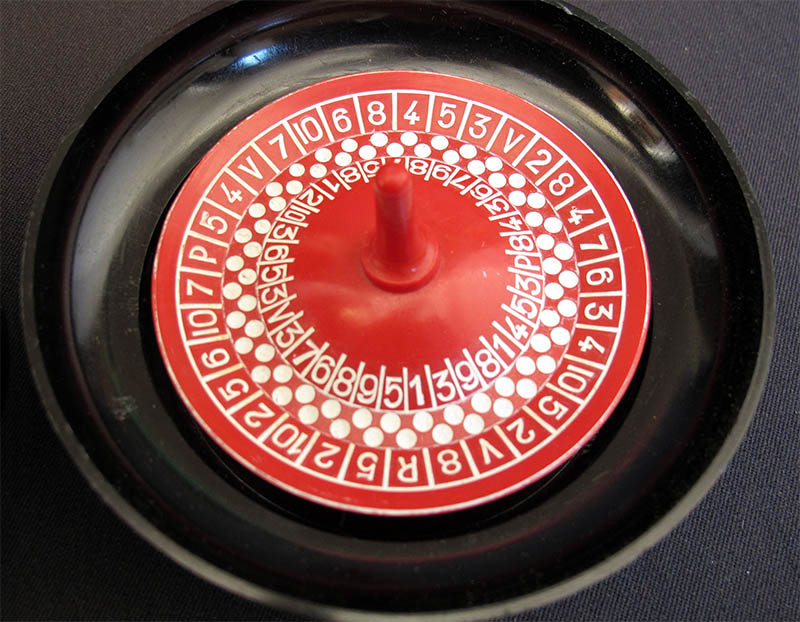 The most distinctive feature in this game is the roulette. Instead of dice, we have this contraption in which two or three balls are spun simultaneously. One of the balls is red, while the other are (or is) white.  Unfortunately, I have two original white balls (one found in each game) but I do not have a red ball yet, so I did not include the balls in the picture.

The roulette is spun only once by each player in each turn and every rider in the team is assigned the result of a different ball. The player, thus, has a choice to make.

In both cases the rules state that only one of the balls may indicate a letter (it does not say so, but I guess that you have to spindle again if two or three balls fall in holes marked with letters).

Numbers, of course, mark the number squares to move forward on the board.

"V" ("Vantaggio", advantage) means that the rider advances 10 kilometers. I admit I cannot see the difference between "V" and "10", also present on the roulette.

"R" ("Ritiro", retirement) means that one of the riders leaves the race. The rules do not mention if from that moment on the player shall spin with less balls (and if so, of which colour, which only makes a difference in the Tour game, not in the Giro).

"P" ("Penalitŕ", penalty) is the only value where the colour of the ball makes a difference. If a white ball marks "P", one rider simply does not move (as if the "P" was a zero), but if the red ball is in a "P" hole, the whole team misses this turn, regardless of where what other balls indicate.

Besides, the board includes the usual race incidents where riders miss a turn, go back some squares or even return to the beginning: foratura (puncture), passaggio a livello (level crossing) and caduta (fall). On the other hand there are some positive "premio de la montagna" (king of the mountains) squares in which the rider who falls on them and all his team (!) move 9 squares forward.

Notice that the riders in the picture above are placed on different stages on the board, for the sake of esthetics. (False: I admit I did not check the rules when I took the picture). According to the rules, the stages are played one by one, and the results are marked on the score sheets after each stage (each square represents a minute).

However, I wonder how you place 15 riders on a single stage, especially in the shorter stages. Stage 3 (Bruxelles-Lille) is only 9 squares long! 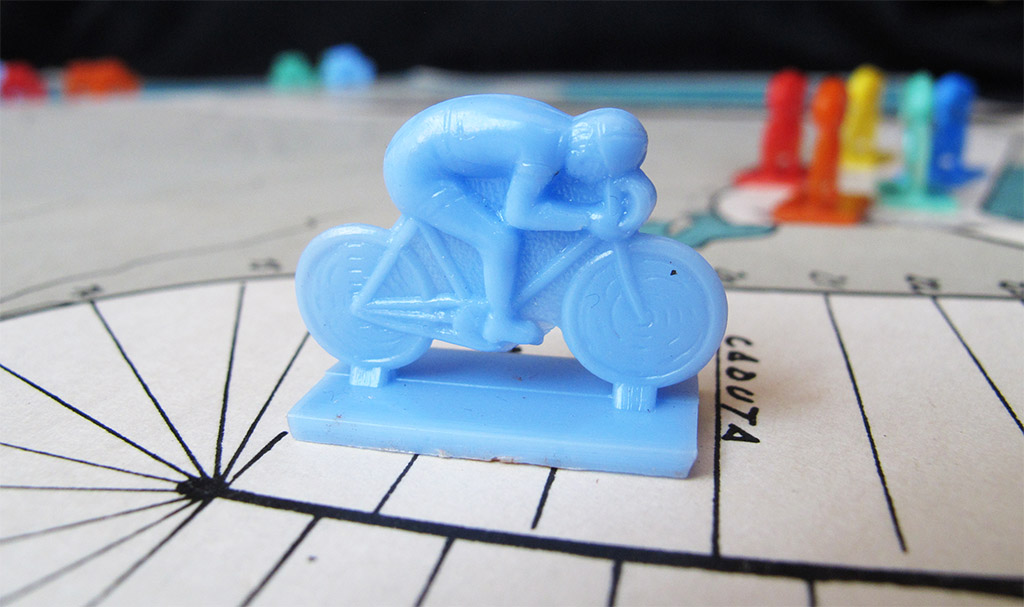 The riders are not numbered. I think they probably should, if only to keep the classifications. 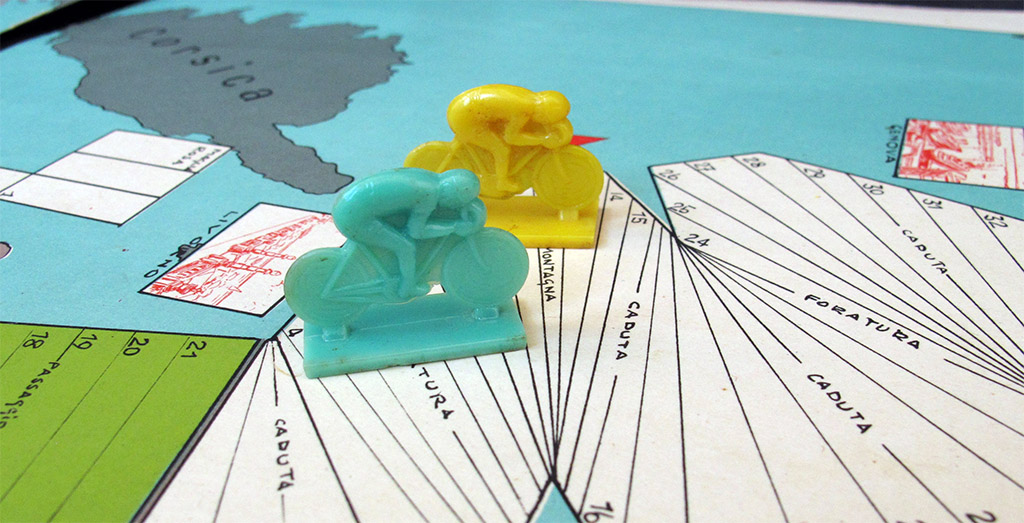 Furthermore, while all the Tour de France fields are roughly of the same length, this is not the case in the Giro d'Italia, as you can see in the picture above. Mountain stages have shorter spaces.

This is a rather unusual feature, since it does not change the "play" of the game, just the "feel". However, this is the strategy that my 9-year-old-self used the first time I designed a game. I quote from the Cycling Board Games text (in the theory section this site): ""When I was a kid I made a very simple cycling game and the mountain squares were simply shorter (the descent squares were, naturally, very long) so that it took quite a while to climb the mountain. Of course it was purely subjective, you had to advance a determined number of squares to reach the finishing line, no matter if the squares were long or short."

Of course, I did not know this game back then. 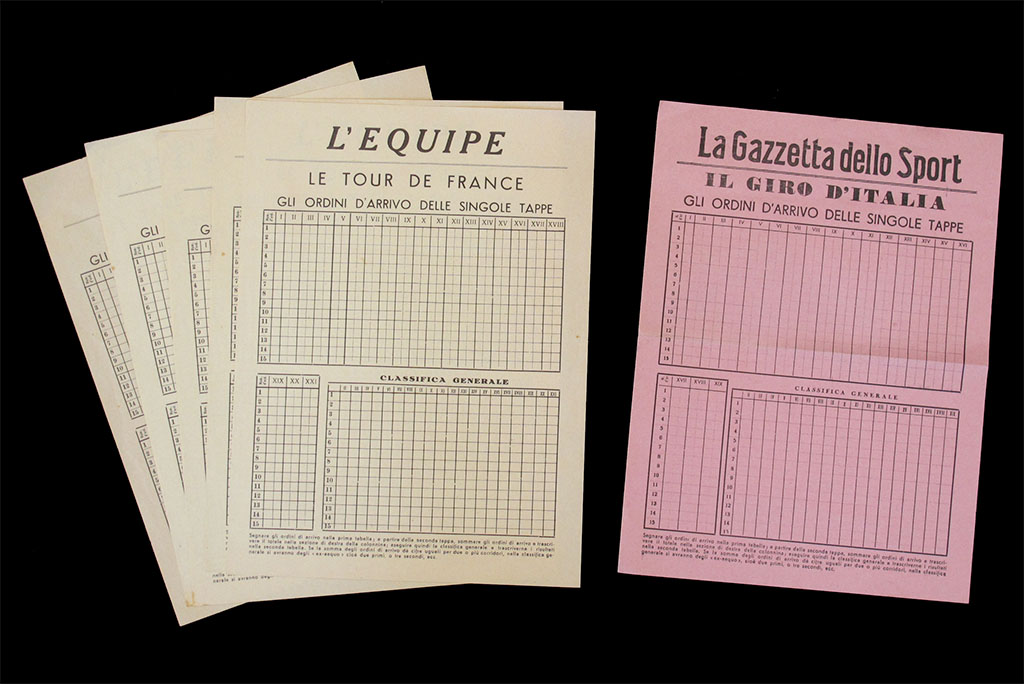 The score sheets. I have only one of the pink model. 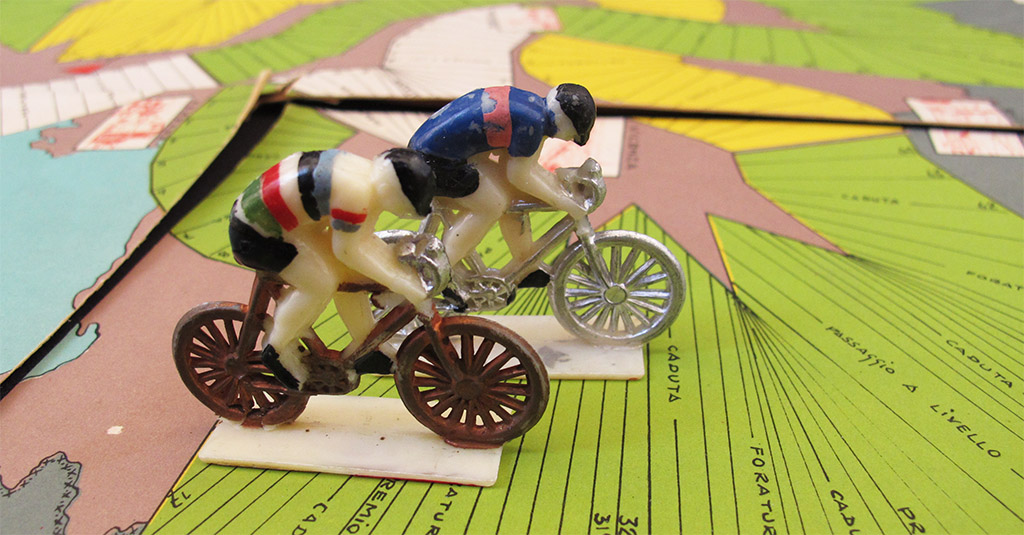 These are the two big riders found in the "Ciclocorsa a Squadre" box. Too big for this board, aren't they? 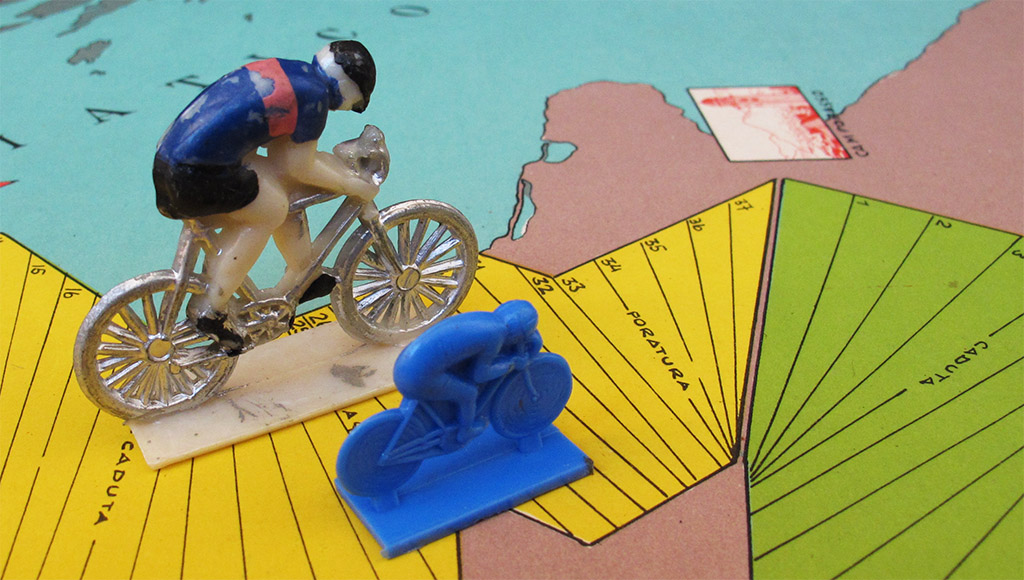 Compare the riders found in different boxes. Even the small one is too big for the board, actually.

As you can imagine, I keep information of many games seen on the internet. I have searched my files and have found two interesting games sold some years ago (I am sorry about the quality of the pictures). The first one is a Giro d'Italia game sold as an incomplete game, in which we find the Gazetta dello Sport score sheet and very similar riders to the one found with the Tour game, but a different board and a different box. The second is a "Ciclocorsa a Squadre game", also sold as an incomplete game. In it we find the Giro d'Italia board, the "Sam Milano" rules AND the big riders. Neither of them apparently had the roulette.

So, I guess the only thing that is clear by now is that this game is (a) hard to find; (b) even harder to find complete; & (c) probably sold in different formats. All the rest is speculation. 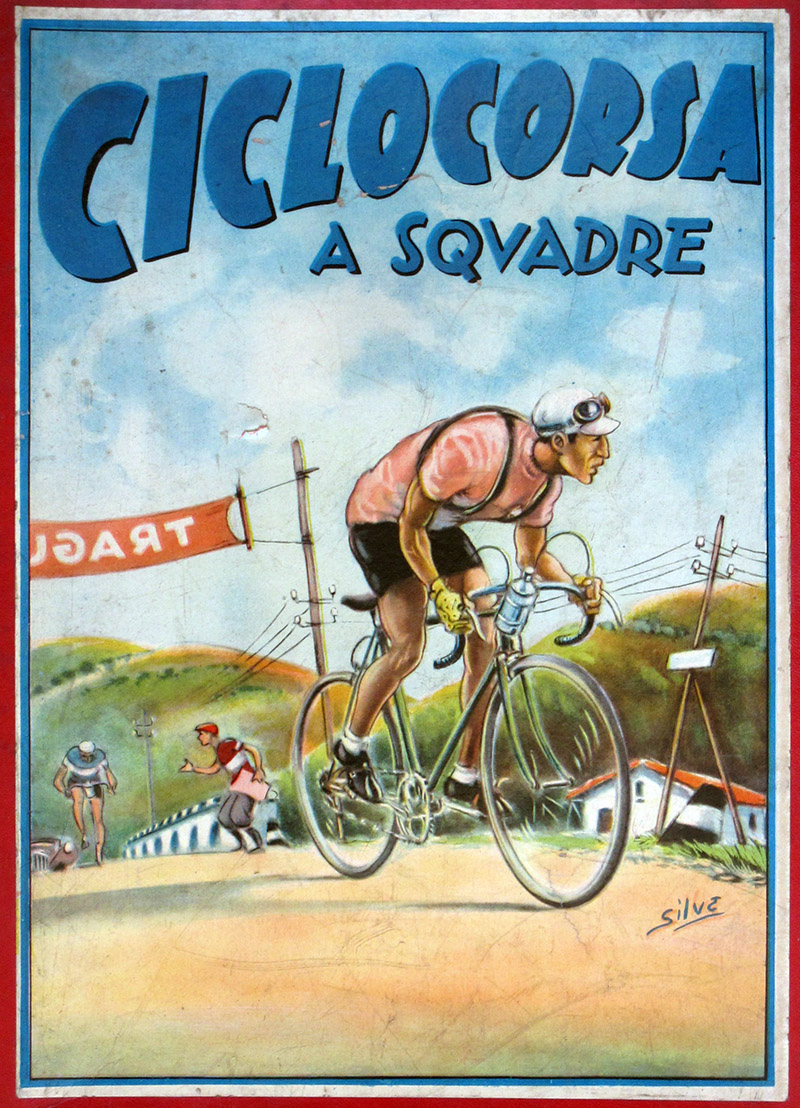 I may not know if the box belongs to the game, but it is a beautiful illustration indeed!