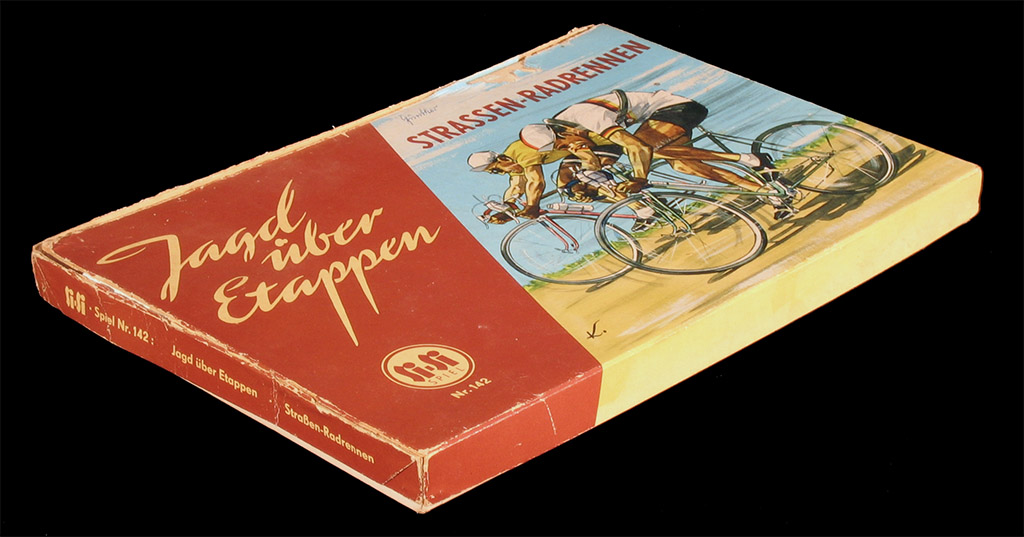 This is a nicely illustrated game from the former German Democratic Republic, meant to represent a stage race like the Friedensfahrt or the Tour Of Egypt (as said in the rules). Of course the game can be played as a one-day race, and I used to have it in the one-day races section since it did not have different stages, and the overall classification is just a points team classification.  However, upon further consideration, I have moved it to the stage races section, for a couple of reasons, one of them being the title of the game (who am I to contradict the game maker?):

The second reason is more subtle. The first think to bear in mind is that this is a game of no chance, one that does not use dice nor other lots. Though the rules are very simple, I might even say childish, it is supposed to be a game of skill. Unfortunately, the outcome of the race is heavily determined by the starting position, which is the only thing in the game that is decided by chance. The only way to prevent this is to play as many stages as players, rotating the starting positions, and add the results. So, finally, this is a stage race game. 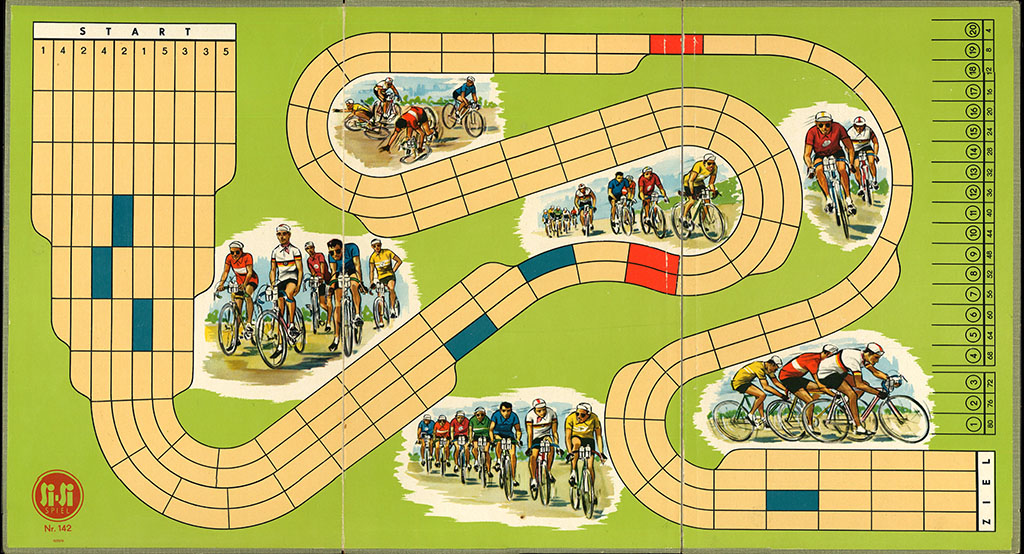 Each player manages a team of 4 riders, among which he distributes, at each turn, the values of 3,4,5 and 6 (the number of squares moved, always orthogonally or diagonally forwards). The leader of the race, however, cannot be assigned the value "6".

There can't be more than one rider on a square (except the blue ones), so riders can eventually be blocked. The red marks are intermediate sprints, where 4 points are awarded to the winner. The blue squares are punctures. On these, a rider stands three turns except if another rider falls in the same square. The both can mend the puncture and keep running. If this helping soul is from another team, he gets 4 points for "comradely behaviour". 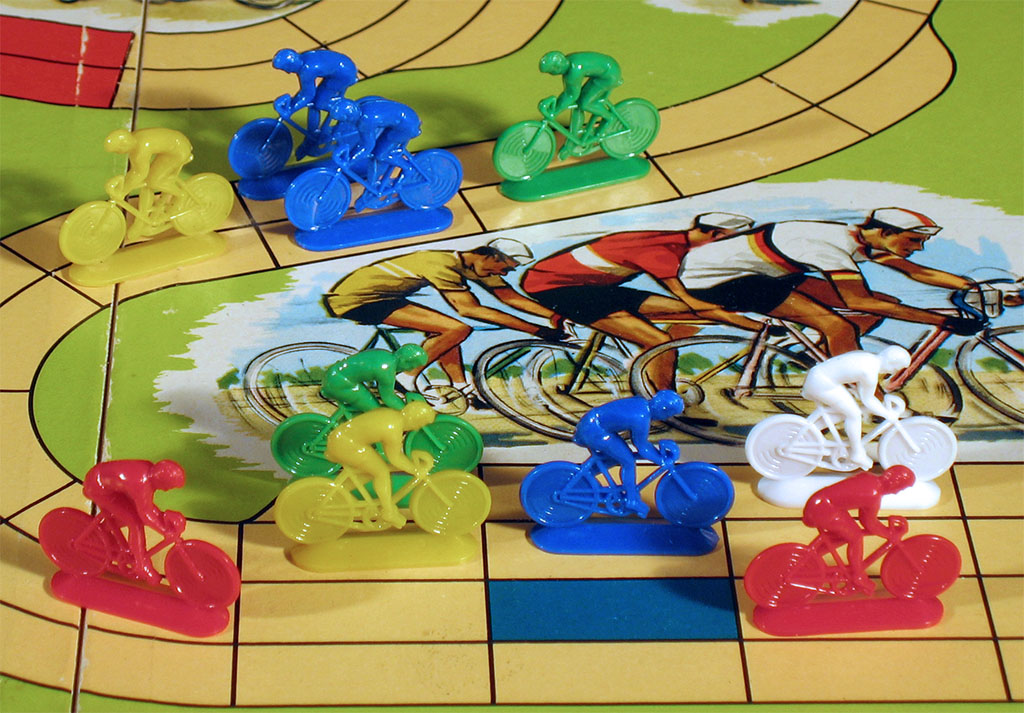 Not only cyclists can eventually be blocked (es the rules put it), but they will find themselves blocked quite often. In fact, the last team to enter the race will be blocked most of the time and will find it quite hard not to finish last. For instance, the second green cyclist in the picture above is blocked. 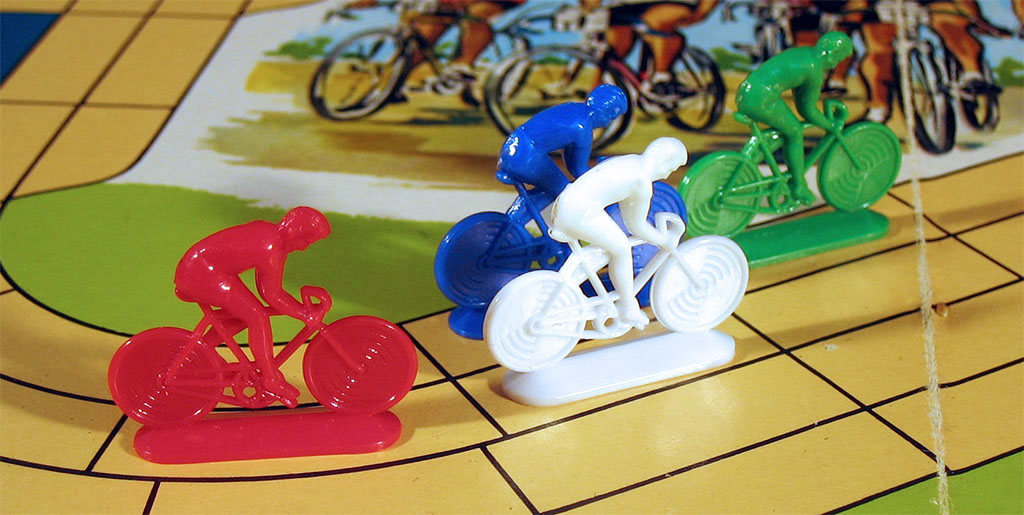 There are a couple of things that are not explained in the rules. One of them is the starting position. There are only two squares for each team, ten in total, on the starting line, while there are four cyclists per team. Anyway, this is not so important, since the starting lane does not really make a difference. What is important is the starting order. In a five-player game the last teams to start will find themselves blocked in the second turn, when the road gets narrower, no matter where they have started the race.

The second thing that is not said in the rules is what happens when the fist riders of a team have already crossed the finish line. Shall the remaining riders be assigned the highest possible values (6, 5...)? Since the rules do not mention it, thats what I intuitively did the first time I played the game. However, this gives further advantage to the teams who have already crossed the line with some riders, which are most likely the teams which started the game. For a more balanced game it is better to consider that the riders that have crossed the line are virtually assigned the highest values, and the remaining riders shall be assigned the lowest values. If a rider is the only of his team on the board, he will  move three squares until he crosses the line. 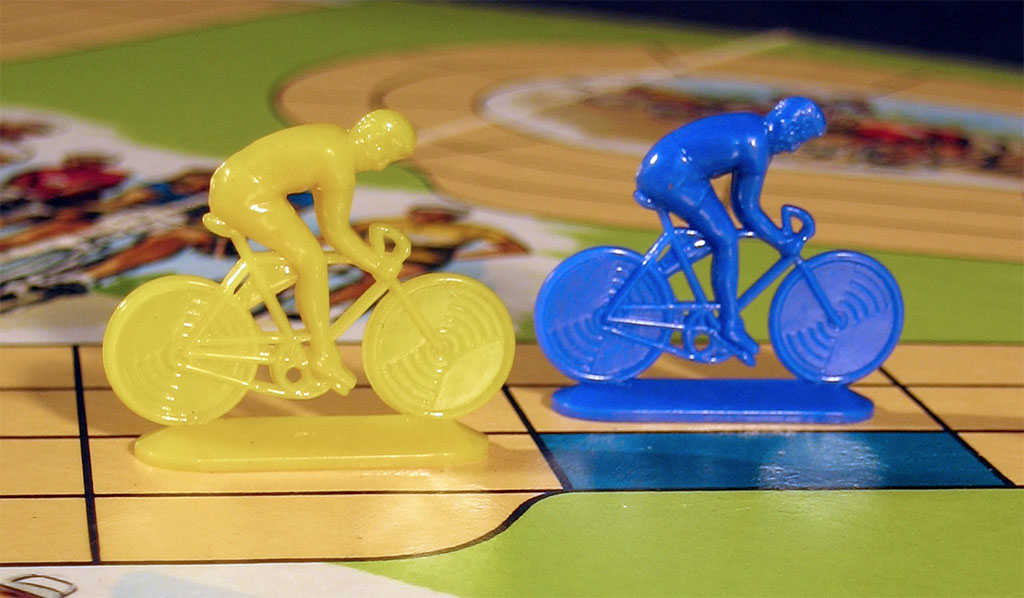 Since there is no individual classification, the five cyclists in each team are not distinguished. In this case, they are small (25 mm)  monochrome stiff plastic riders, not so different from those found in other East German games. The board, by the way, measures 58 x 32 cms, and the box is 34 x 22 x 3 cms. Not really big. 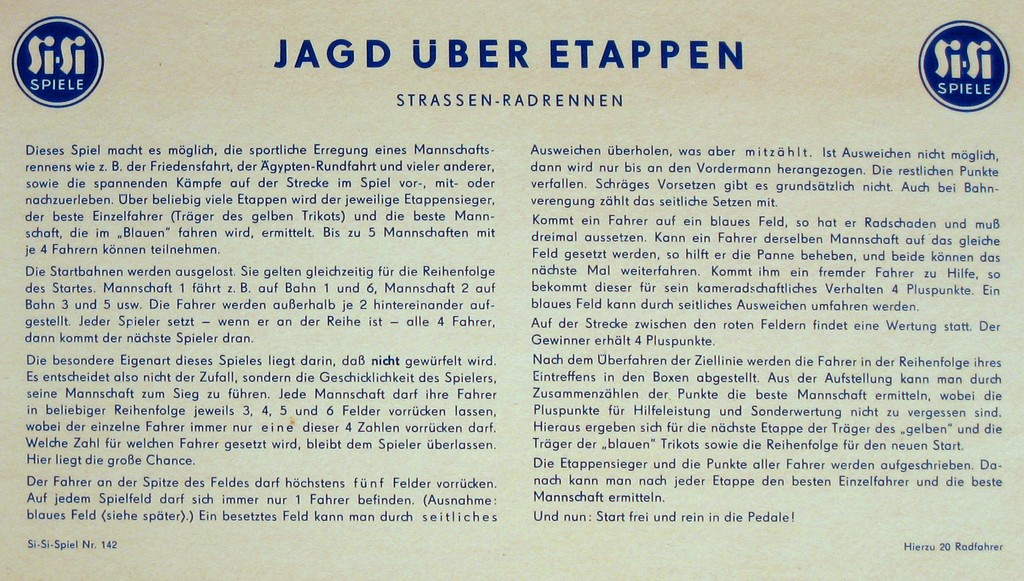 By the way, in the free downloadable print-and-play version I have included an English version of the rules. It is somewhat abridged, but all the rules are there. If you feel like making a better translation, please share it. 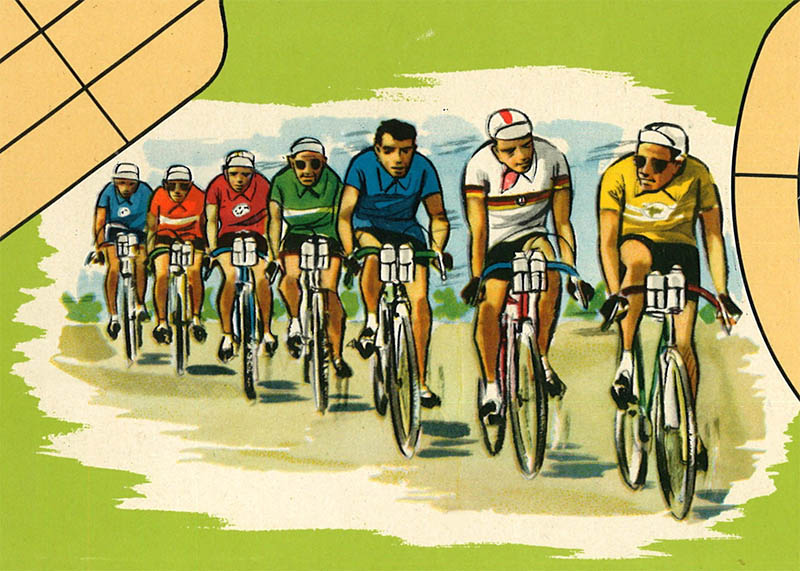 Team work (or maybe it is just a peloton). 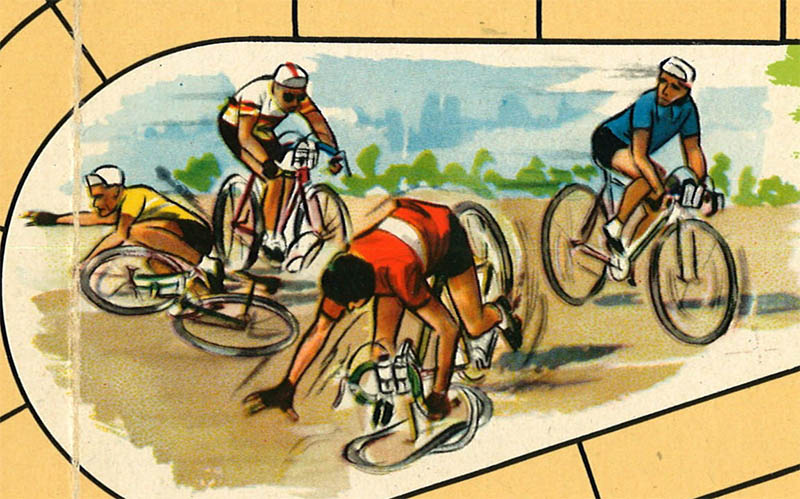 Shit happens, even in socialist countries. 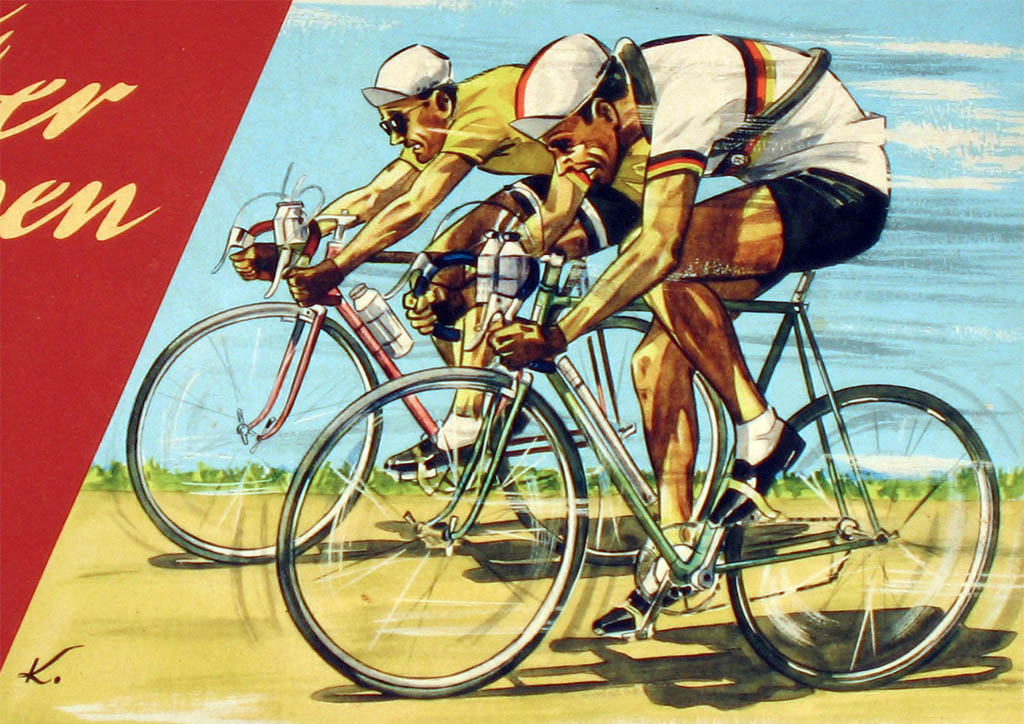 The illustration on the box is signed by "K."