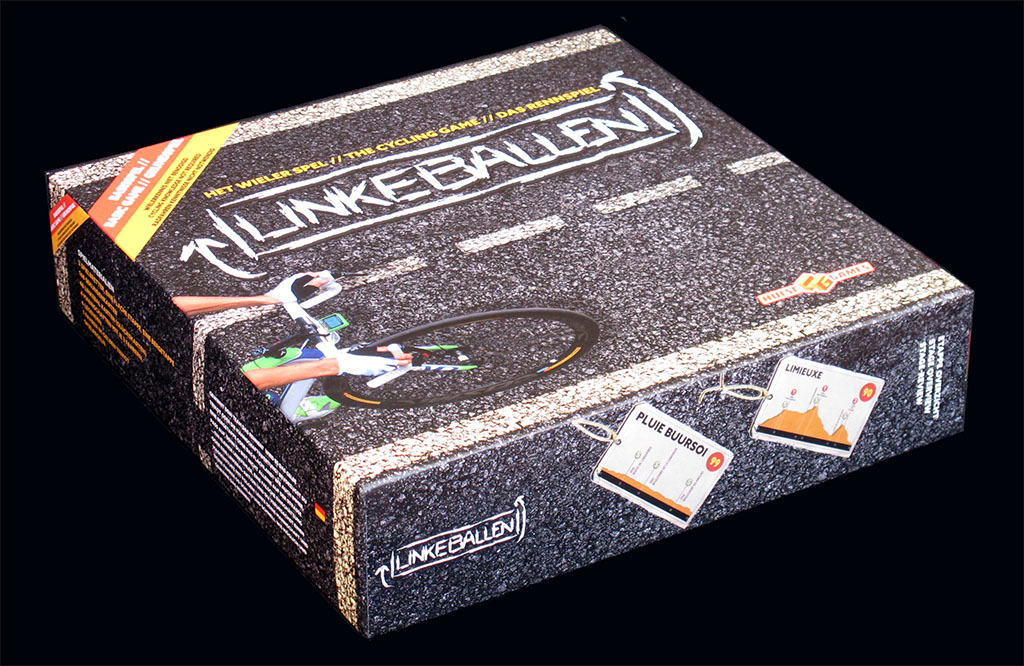 Here is a new cycling game aimed at the gamer's market. It represents a stage race to be played over different days (each stage playing time is estimated at around 90 minutes) and has rules for different types of roads, energy management, and aspiration. The energy management is implemented by moving the riders with cards, instead of dice, which I have said many times that it is my strategy of choice. The first impression is quite good, and I consider it an interesting game from the start.

According to their makers the game has been thoroughly tested before its release and, while I admit that I have not played the game yet, it looks like it has been indeed. Just looking at how the aspiration rule is explained in the rules you can see that they have foreseen every possibility. (Don't be afraid: the rule is not difficult, I just mean it is well explained). 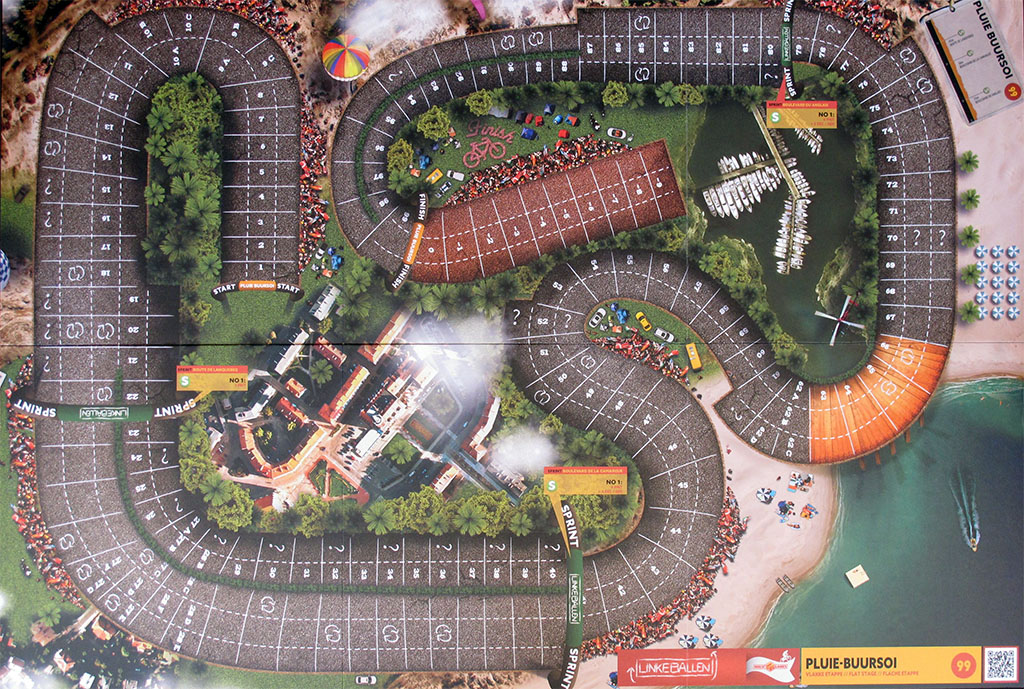 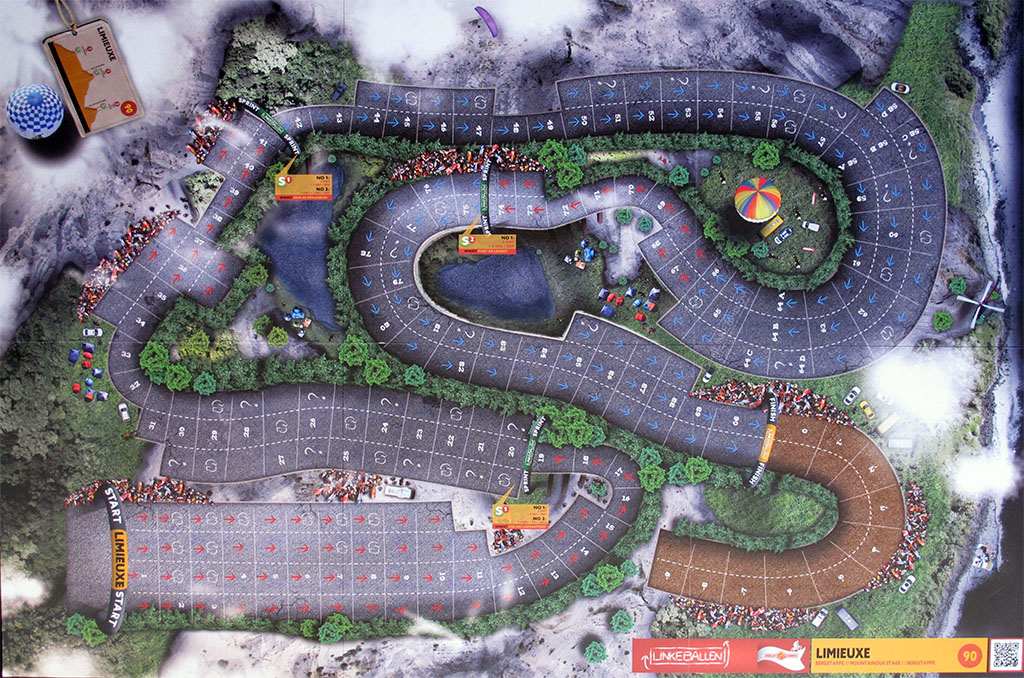 The game has a big (85 x 56 cms) double-sided board with a different stage on each side. It is advised that new players begin with the flat stage. SInce this game is supposed to be a stage race you will play both stages (a few times each), but I guess you can just play one stage as well.

After the first turn riders move in the order of the race and, like in any other game with such a rule, you have to determine who is ahead when riders are side by side. This game has an original design (at least I do net remember seeing it any other game) for this: the trees on the side of the road are supposed to protect the riders from the wind, indicating which rider is ahead and thus plays first: the one closest to the trees. A simple and brilliant idea.

In the base game there are four teams of three riders each. You can buy a couple of expansions which feature extra teams and cards for advanced rules. I cannot comment on these rules yet. (Maybe soon).

I don't know if more expansions are scheduled for the future but, being a stage race game, I would expect to see a new boards featuring different stages. Of course I understand these are expensive to produce and will have to wait, but it would be nice to have them. 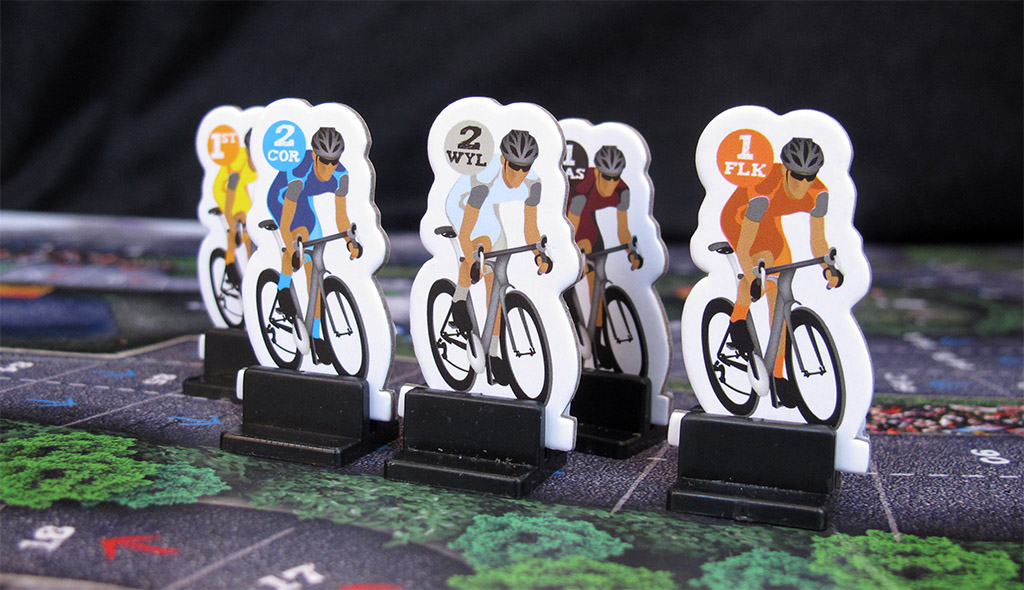 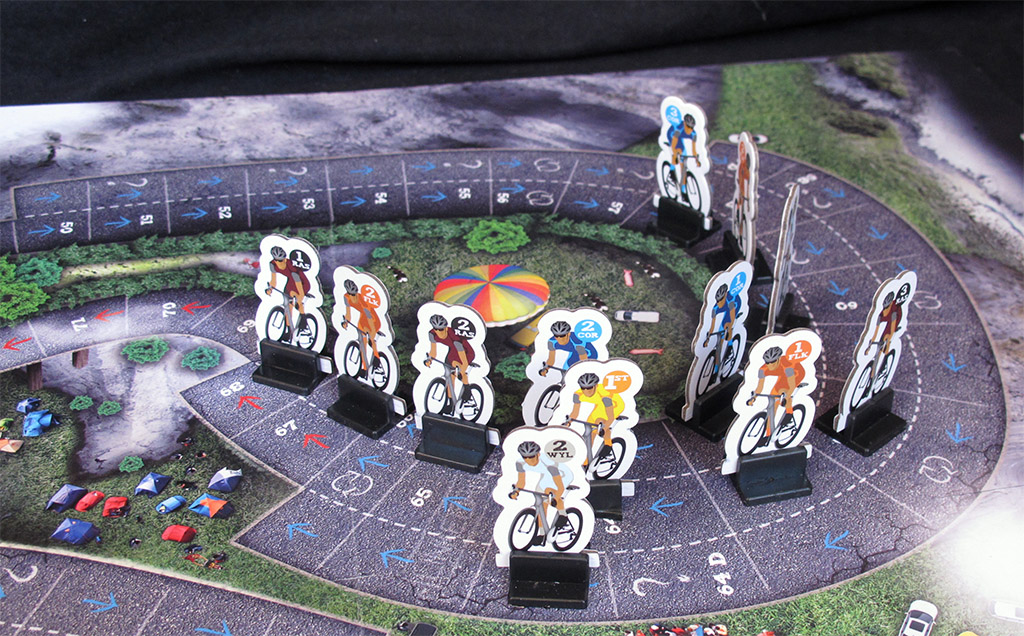 So far I have just mentioned the positive aspects of this game. Of course I cannot say I like everything about it. I do not like so much the illustrations on the board or the box artwork. I have seen more beautiful games. And of course, I would have prefered to have plastic riders. Don't get me wrong, the riders are not that bad (and the carboard, both of the riders and of the board and box, is of good quality).

There are also some rules I do not like that much, like the possibility that a rider causes a mass fall by riding deliberately slow in a narrow road. A good part of the rule book deals with that possibility (as I said, it is clear that the game is not undertested) and there is even a "minimum speed" rule to prevent this as much as possible, but still a player can do it. 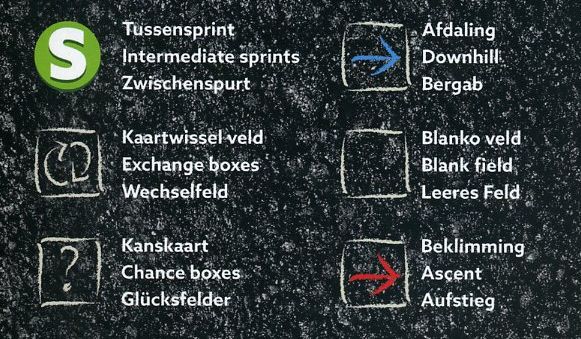 The game has "chance boxes" in which riders draw chance cards. This makes the game language dependent, which is a pity if you do not speak Dutch, German or English.

By the way, the English rules could have used a professional translator or at least a corrector. (Well... look who's talking ;-) 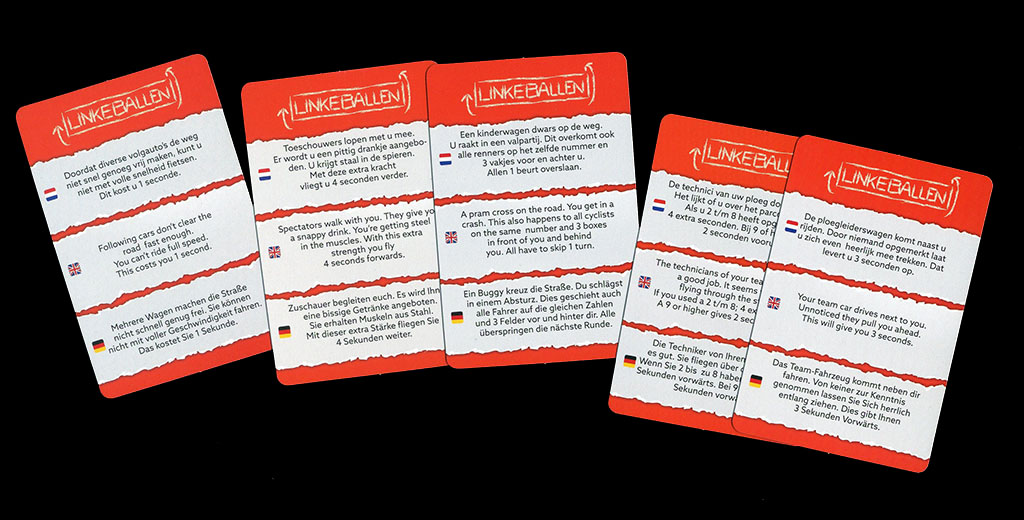 As I said above, the riders are moved by means of cards. Each player receives 15 cards at the beginning of the game (and 15 more each time all the cards are played). These cards belong to the team, not to individual riders. The energy is shared between the team.

This is not really important: I cannot think of a single game that translates well the squares on the board to GC time. It's just that this game is among the less realistic of all. 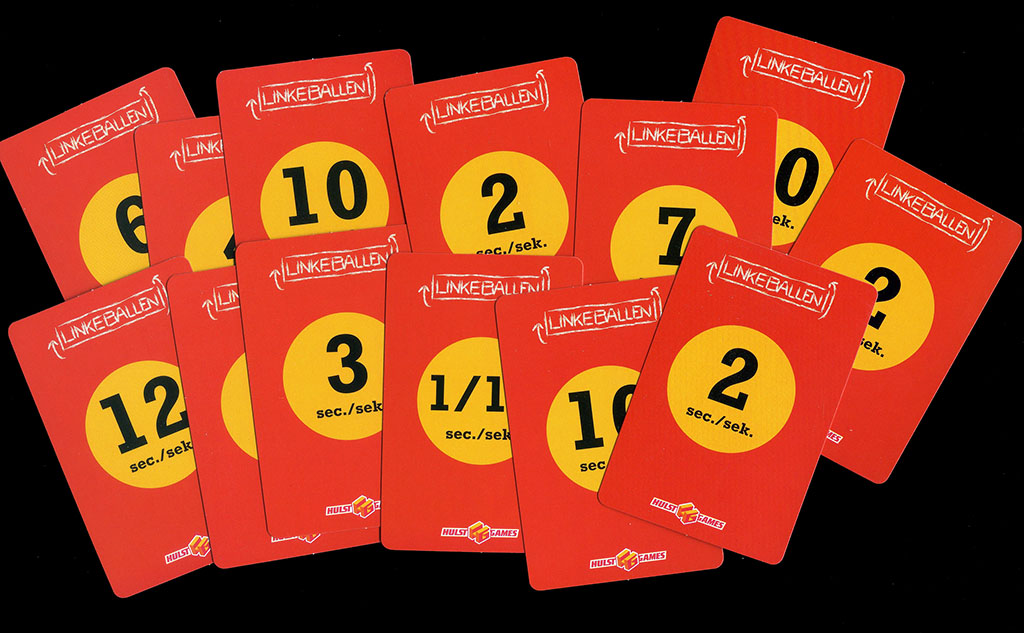 Since the game represents a stage race, there are rules to keep the classifications. Here is where the rules get confused (at least the English rules). Apart from the time of the riders calculated in seconds for the GC, there is also a Team Classification, calculated in points, which is more important than the GC. There are also intermediate sprints during the stages in which points and seconds are awarded.

At the end of each stage all of this is added up and written down in the provided table (a sheet for each team for each stage!) or uploaded to the Tour Calculator with the help of the QR code printed on the board and a smartphone. Of course, if you use the game calculator you probably do not need to fully understand the scoring, and that's why it is not so clear in the rules. In the case you do not want to use your smartphone (as is may case), the rules also mention a Tour Calculator on their website. Unfortunately it is not available at the time of writing this. (I will be pleased to change this sentence as soon as the calculator is online). 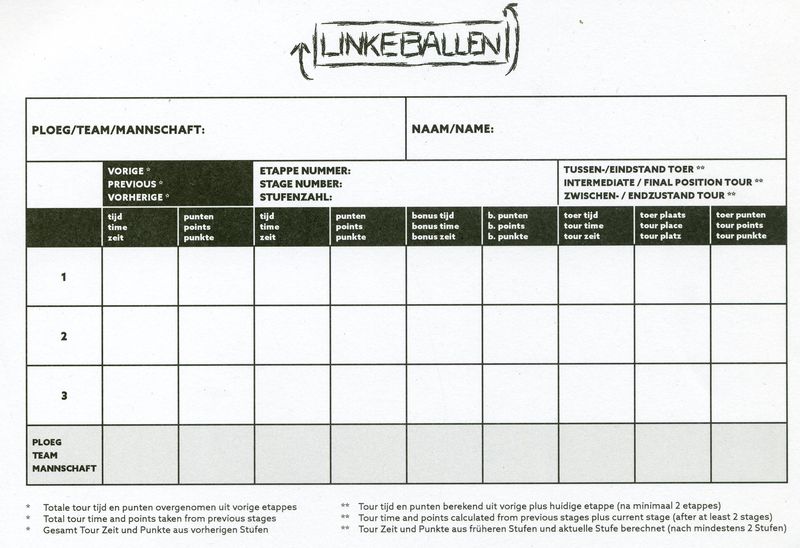 All in all, I quite like the game. I think its positive aspects outweight by far the negative ones. If I have insisted on some of its drawbacks it is just because I think that the game has a strong potential. Of course, some things can be corrected in the future  (some clarifications on the scoring rules "for dummies" would be welcome) and others are just part of the game, and it is allright to leave them as they are, even if I do not like them so much. 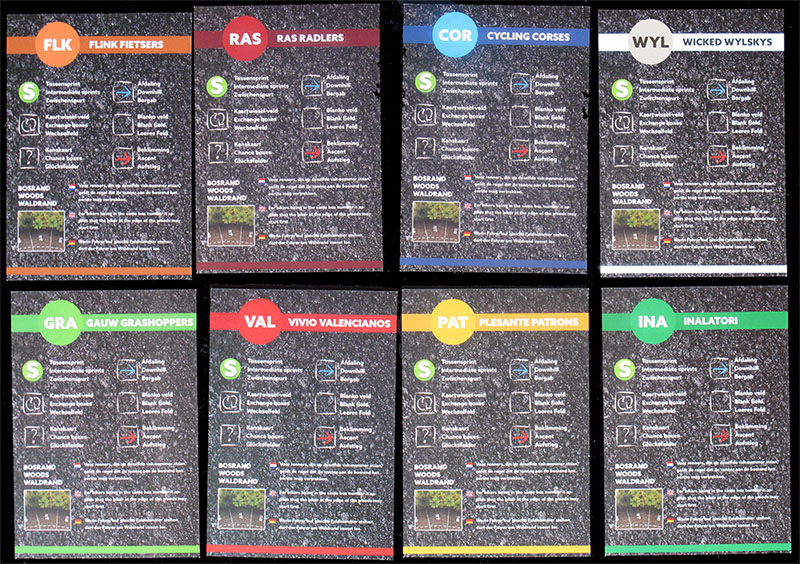 UPDATE (2016): There are two expansions of the game available from the Hulstgames website. With them you can add 4 extra teams to the game (two with every expansion) and a couple of rules' variants for a more tactical game.

That makes a big peloton!

UPDATE (2017): There is a new version of the game called Le Tour de France (officially licensed to use that name).