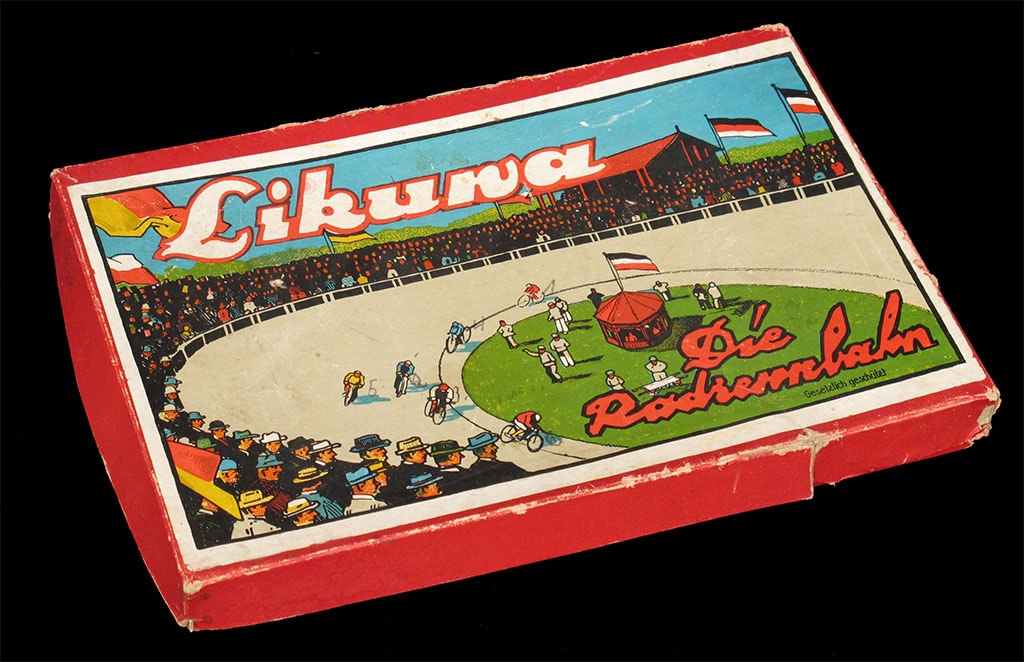 However, the flags displayed in this game may allow us to date it more accurately: on the box top we see two different flags (one of them twice). This flag that we see twice is the tricolor Imperial (Second Reich) flag, used until 1918, and briefly recovered as national flag between 1933 and 1935. The second flag (same colours, different order, white below) is looks like the flag of the city of Berlin used between 1861 and 1912. (More on flags below).

So this game could have been made either before the first world war or later by a nostalgic. Even though my first impression (by the touch-and-feel) is that the game was from the 1920s,  now I think that the possibility that the game is older holds water. However, it is hard to say.

(Of course, the words "Gesetzlich Gesch³tzt" written under the game's name mean "trademark registered" and have been used all throughout the XXth century. They do not help to date the game). 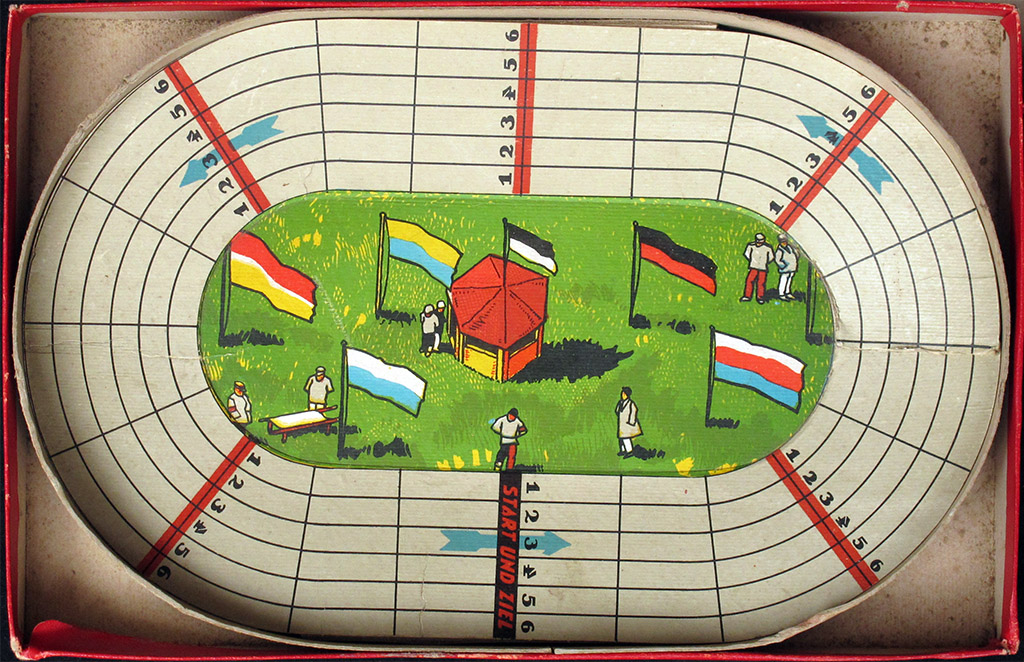 This game is quite small. The box measures 35 x 29 x 3 cms and the board, as you can see fits inside the box. With only 20 squares, it is also one of the shortest velodromes in my collection.

The most outstanding feature of this game, though, is the cant in the track. There are not many games with canted velodromes. Not only they are more difficult to make, but the riders tend to fall.

I cannot identify the leftmost flag, but the rest are German states' flags. Clockwise: Braunschweig (yellow/blue), East Prussia (black/white), W³rttemberg (black/red), Schaumburg-Lippe (white/red/blue) and Bavaria (white/blue, still in use, but not used in the interwar period). All these flags were used in the Imperial (1871-1918) period, some of them were abandoned during the Weimar republic (as is the case of the Bavarian flag), most of them are not used since 1945 (not the bavarian flag, which was reinstated after WWII).

These flags reinforce the theory is that the game was made before 1818, but some of these flags have been used by other regions in other moments (the yellow and blue flag was also used by the Prussian province of Upper Silesia -now  belonging to Poland- between the wars), so my guesses may not be 100% accurate.

Inside the box I received the remains of three metal cyclists. I have not repaired them yet, but they are almost complete. I do not know if they belong to the game, since they do not look like velodrome riders in the first place. In fact they look a little older that the rest of the game (even accounting for the game to be from the 1910s).

However, my main objection is that I do not think they will stand on the canted curves when they are repaired. It was not easy to make even the base of the rider stand in the curve to take the picture below! 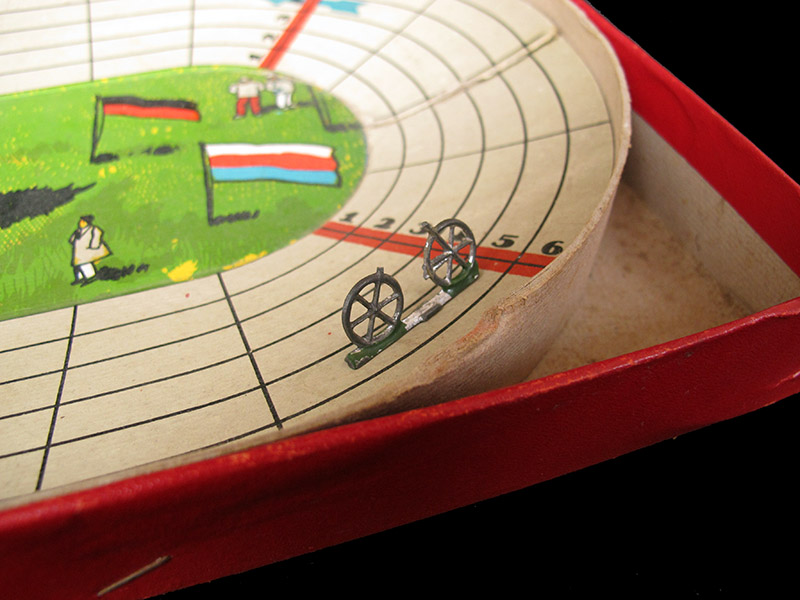 Canted curves are nice, but they do not help playability!

By the way,  in the Giocchi dell Oca website there is a picture of very similar riders, which belong to the (older) English game Wheeling: 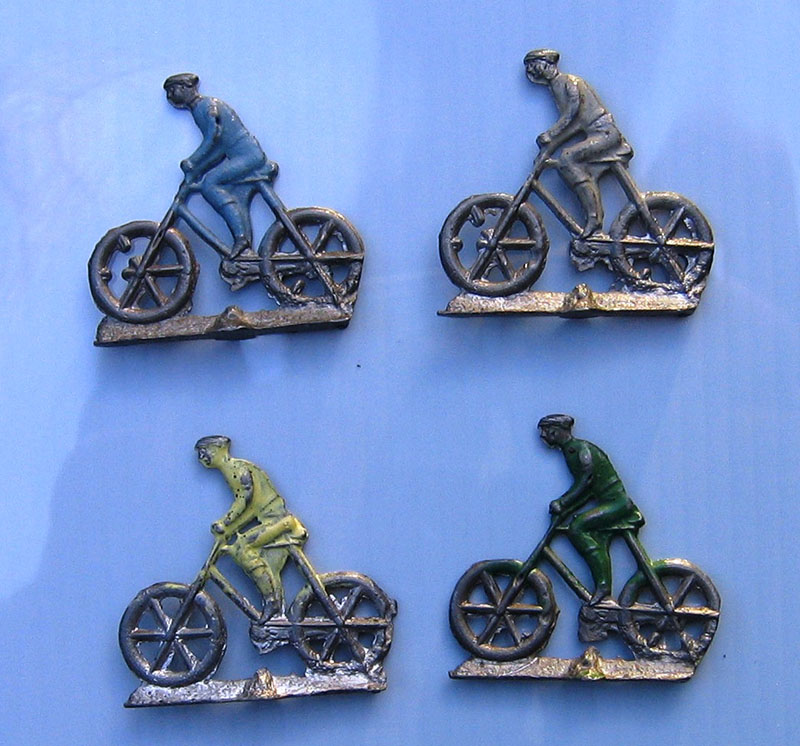 Thanks to Stefan Krug and Laisvydas Liaudanskas for the (independent) tips that allowed me to buy this one.