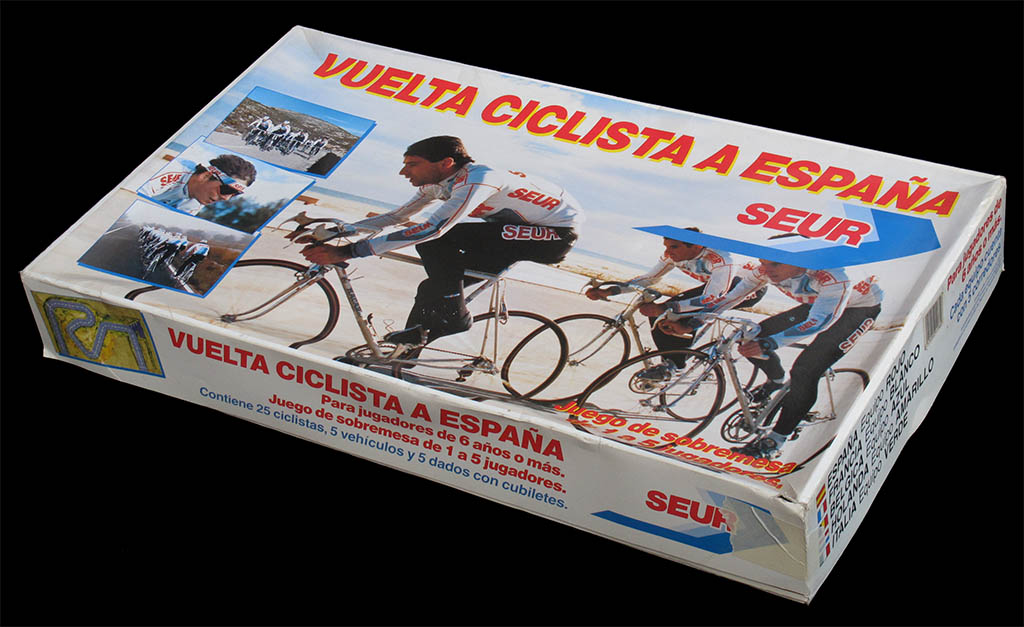 After a while you think you have seen them all. Of course there are a lot of cycling games that you have never heard of, but they are either (a) self-issued games of which just a few hundreds or less were made; (b) games included in newspapers or magazines (there is an endless supply of those); (c) promotional cycling-themed games of goose (we will never know how many of those were made); (d) they come from remote countries where I do not have any reliable contact to find them (from Russia, Brazil, Japan, South Africa...); or even (e) most or all of those possibilities combined.

And then, out of the blue, you discover a such a beautiful game, a big one furthermore (the box measures 68 x 40 x 9 cms), made not so long ago in your own country, which does not belong to any of the former categories, and which you had never stumbled upon in any thrift shop, second-hand market, games convention or online auction site. And you wonder how many more there must be out there. 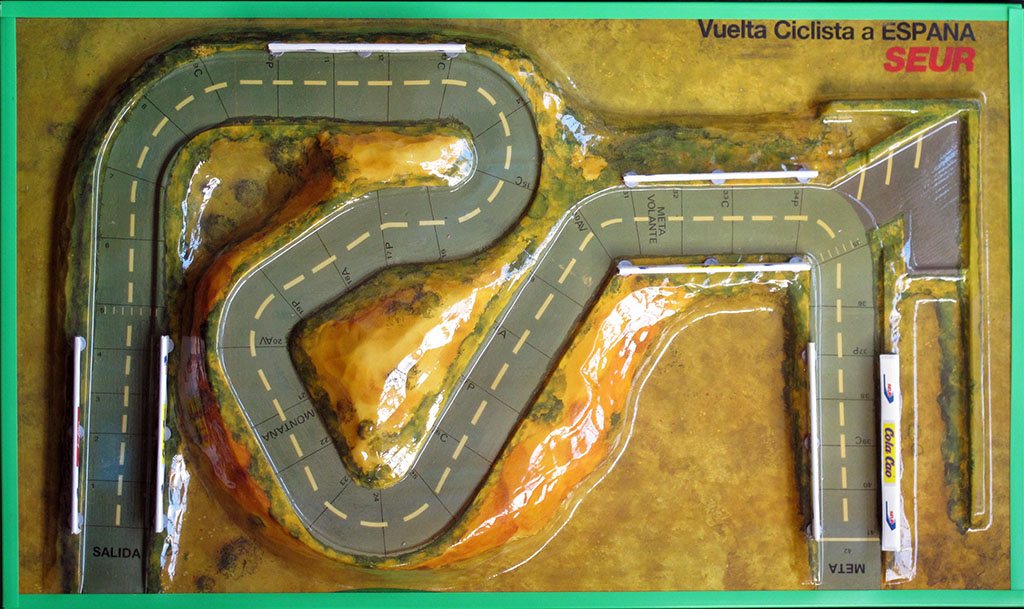 SEUR is the most important express delivery company in Spain and it sponsored a professional cycling team between 1988 and 1992. The team won the 1990 Vuelta of 1990 with Marco Giovanetti. I do not recognise Giovanetti on any of the pictures in the game box (though the rider most prominently displayed might be Francisco Navarro Fuster, winner of stage 4 of the 1988 Vuelta; what do you think?) which makes me think that the game might have been made before 1990. 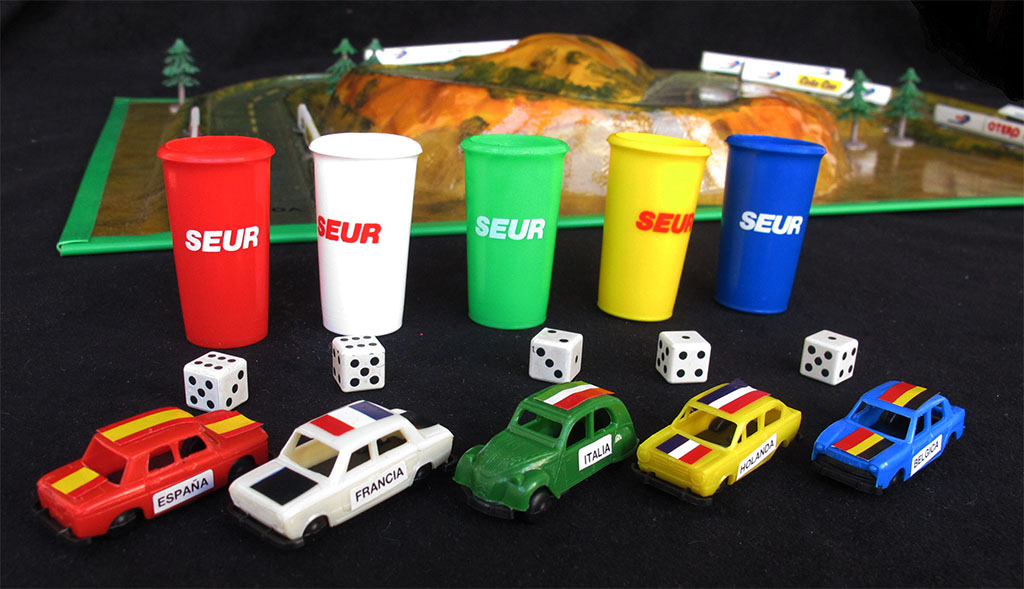 It is a simple dice game ("for children over 6", says the box), but it has an unusual rule. As you can see there are five teams of five riders and a car each. The riders are numbered from 1 to 5 in each team, and  the winner is the first team with three riders crossing the finish line. In their turn players throw the die five times and the first throw is for rider number 1, the second for number 2, and so on...

However, at any time a player can decide to move the team's car instead of the designed rider. 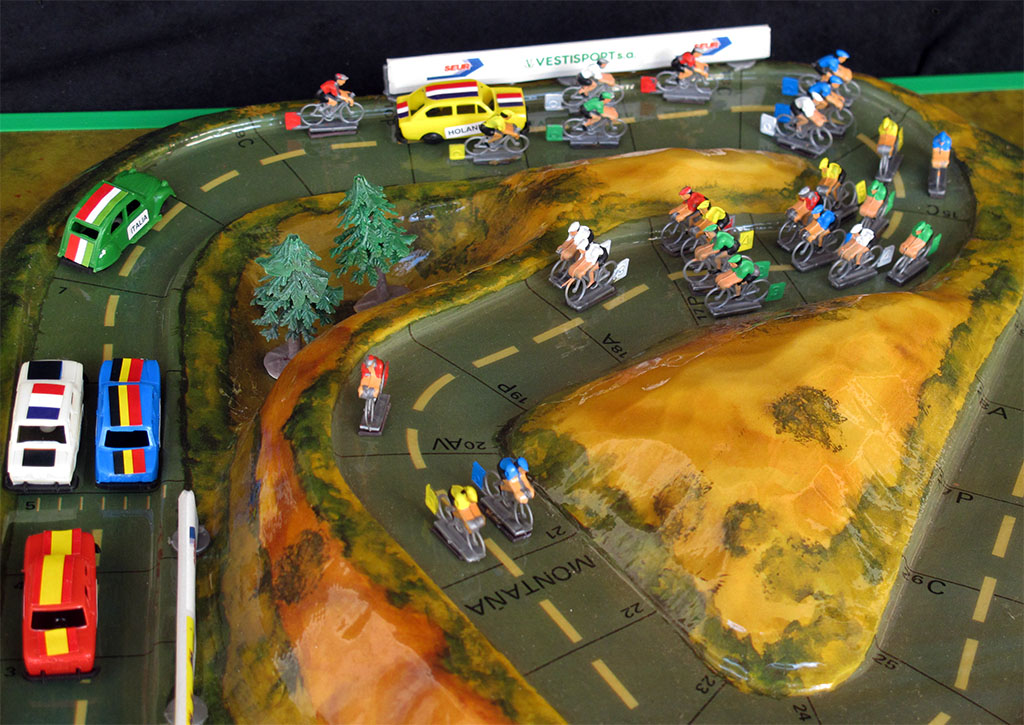 The reason is that there are certain fields on the board marked with letters C (for "Caída: fall) and P (for "Pinchazo": puncture) which should be avoided. Riders who fall on those squares will stay there until they are overtaken by the team's car. If the rider is behind the team car when he falls on such squares, he will abandon the race unless he can be rescued if the team posseses "mountain points" (which are awarded to the first five riders to pass the mountain -"Montańa"- square).

Furthermore, a rider falling on a square marked with an A must A-bandon the race and cannot be rescued. Nevertheless, a rider can avoid that square by moving the car and not the rider in case of a bad throw. 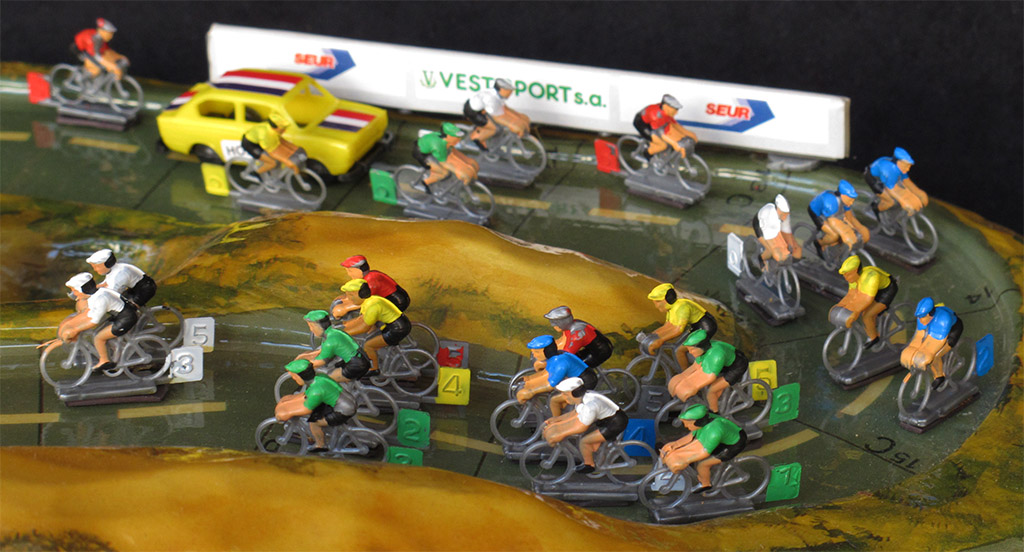 There are also positive squares, marked AV (for "AVituallamiento", that is, feeding zone). Riders falling on them have an extra throw.

There is also an intermediate sprint ("Meta Volante") which also gives an extra throw to all the riders who pass it (regardless of whether they fall on it). If the result of this extra throw makes the rider fall on a C or P square, the throw is not valid and the rider may repeat the throw.

After square 35 there is a parking place for the cars, which cannot help riders in the final part of the race even though there is a square marked P and one marked with a C. 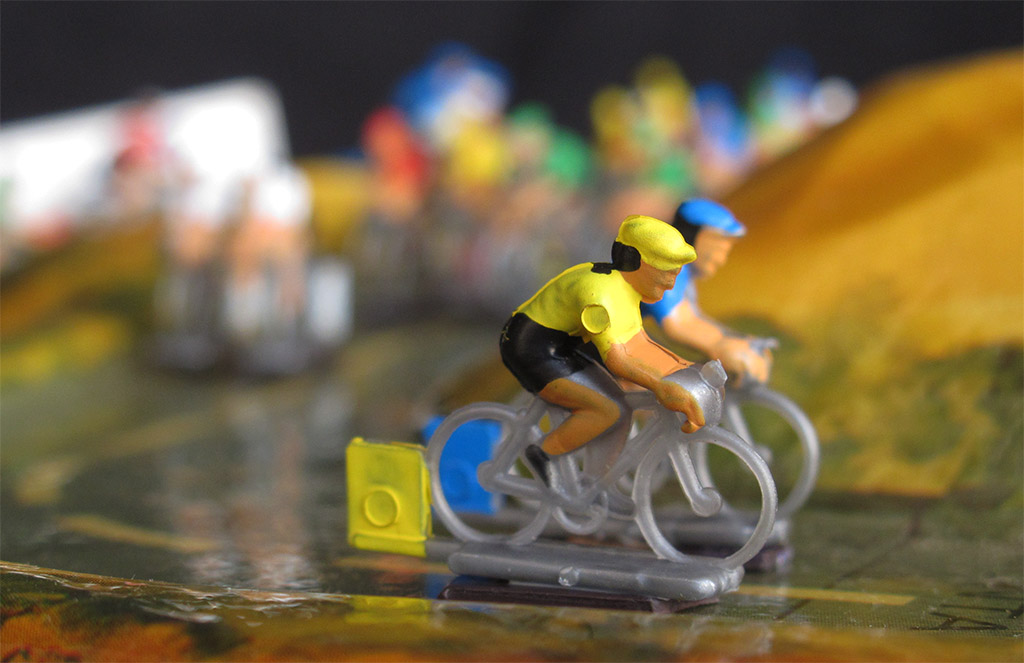 The riders in this game are small. They measure 24 mm including the tail with the number (only seen from the left side of the rider). The bicycles measure 20 mm, and have a small magnet under them which prevents riders from falling. (The road is made of plastic but there is obviously something else underneath). 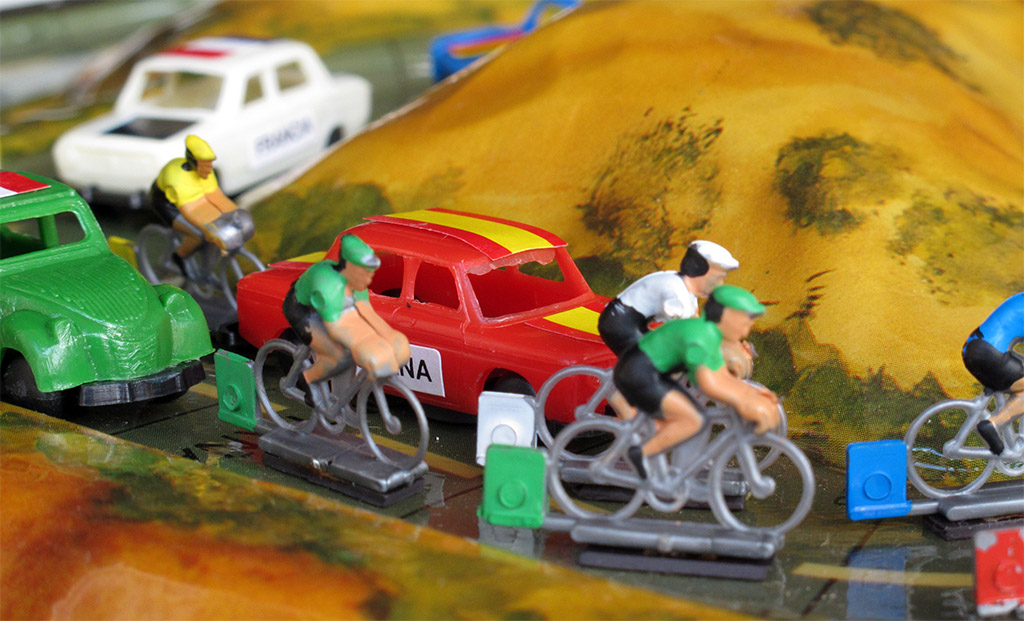 The cars also have a small magnet, but the trees do not. SInce the trees are not mentioned in the rules, I am not 100% sure if they were originally included with the game or were added by the former owner. But they fit perfectly in the game.

Speaking of the former owner of this game, he probably had two copies and mixed them since, while I have 5 riders  in each team, some of them have repeated numbers (and of course, some numbers are missing). Nothing important that can't be solved with little stickers, of course.

Also, as you can see, the paint of the red team riders has suffered more than that of the other teams.

Apart from "Seur" the game features advertisement for other brands, like Otero bicycles (those used by the Seur team, which was renamed Seur-Otero for the 1991 season), Cola Cao (a chocolate flavored drink), Hummel or Vestisport (both of them sportswear). 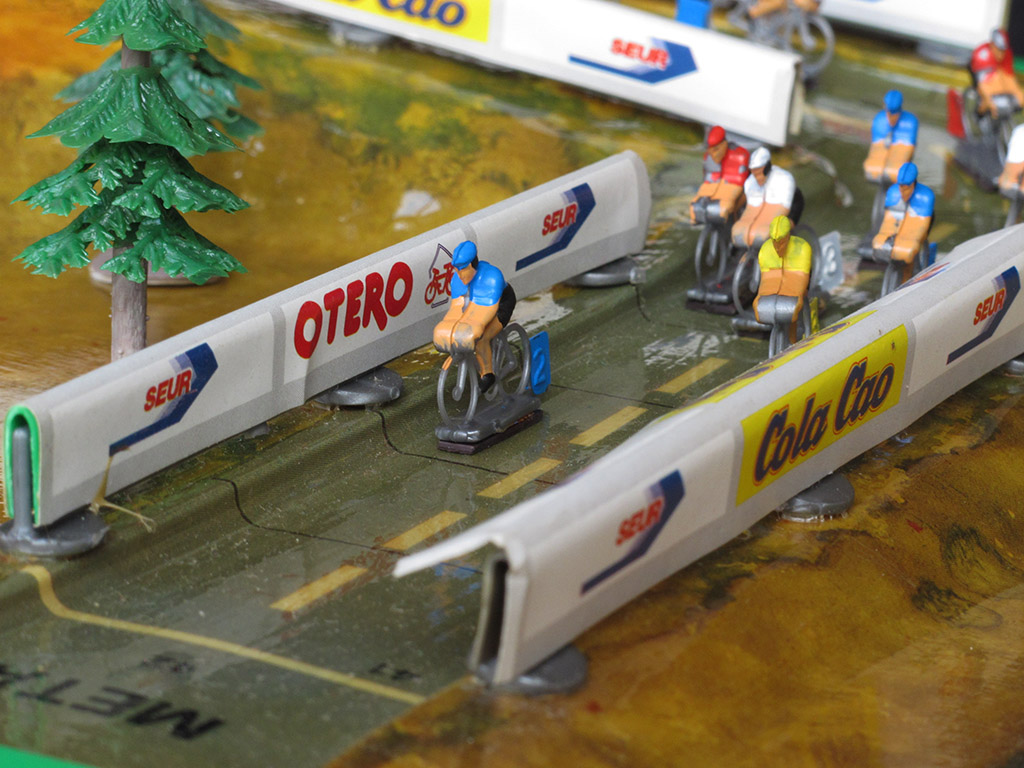 The game also provides classification sheets in case you want to play a stage race. All the stages are similar and the classification is a points classification, with 40 awarded to the winner of the stage, 36 points to the secont... and one point to the 25th rider. 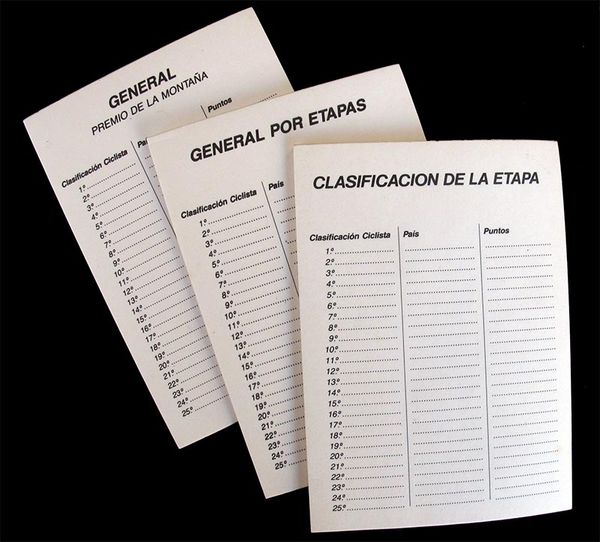 To me, this does not mean this is a stage race game, and I will file it under "one-day race games". Needless to say, the game also goes  straight to my favorite games list.