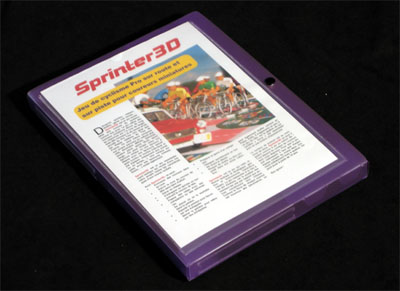 This is a game  released by a French gaming club, which is permanently evolving (see the update below). In fact, here are two games, since the Velodrome part can be considered a different one. Basically, the game consists of a set of rules (bilingual French/English) which include cut-up riders in case you do not have your own, a set of three special dice (D6 with faces numbered 122223), and a board made of (generally) 4 A3-sized panels. The boards are sized for big Cofalu riders (not included), which as you probably know, look nice on the board but are quite unstable. 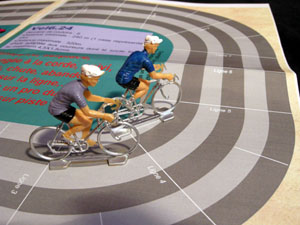 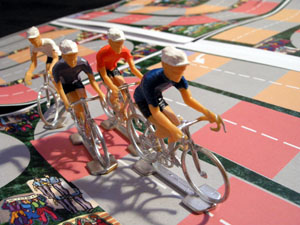 The races you can purchase have been changing over time. At the time of writing (april 2009) their website offers 4 different races: Tour de Flandres, Milan-Sanremo, Amstel Gold Race and Liege-Bastogne-Liege.

Other races that have been available at some time include Paris-Roubaix, the Alpe d'Huez climb, a version called  PRO (which consists of 10 different panels with which you can build different races) and a track (called VEL6.24), with different rules. 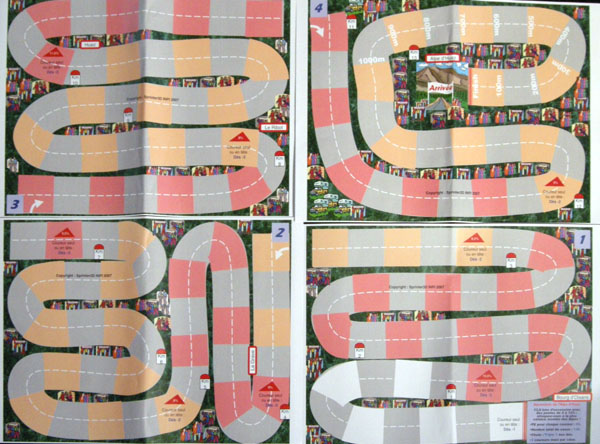 An important inclusion in the 2009 rules is a referee ("comissaire de course"). I am afraid this shows a weakness of the game: foul playing is difficult to control.

The main difference between the two sets of rules is the "penalty numbers" on the road. The 2009 rules are more complex, and I am afraid they cannot be played on the 2007 boards.  On the other hand, the 2007 rules can be played on the new boards. In fact, as the game's website explicitly says, you can use rules of other games to play with this boards.

That's what I wrote about the rules in 2007 (of course some details might not apply to the new rules):

Basically, players manage a team of 3 to 5 riders, among which they secretly distribute a given number of energy points. This distribution remains secret during all the race (but a copy is given to the referee). In every rider's turn, players chose to throw one, two or three dice (remember,  the dice are 122223) and cros the same number of energy points. All the riders in a group can follow the leader of the group at no cost. Furthermore, the leader of the peloton advances less than the throw of the dice (depending on the type of road). Every rider must advance at least once and can choose the side of the road. Since the right side of the road plays first, the rider in front of the pack will try to move to the left side of the road.

I have not played the game yet, but my guess is that, among adult gamers trying to play the right strategy, the game becomes a bluffing game: Since a breakaway rider also gets an advance penalty in every turn, once you break away you have to throw three dice at a time, to minimize the number of turns (i.e. of lost pips). So, I think that the race will move very slowly until there is the first serious breakaway, which is better accomplished from second or third place of the peloton. So we probably will find some struggle for a good position and, from a certain point in the race, an all-the-way attack. Probably the most interesting thing is how to get the right riders to the right position of the pack at the right moment in the race.

Nevertheless, the game mechanics, although interesting, are probably  weak in the sense that a time-trial canot be implemented . Similarly, the designers, maybe wisely, have not tried to implement a stage race and have not devised a way to keep track of time.

Finally, not having tried the game, I cannot tell if the fact that there is no limit to the point distribution in the game is a weakness or an advantage. The Alpe D'Huez race, for instance, is 138 squares long (and mostly uphill, which means -3 for a breakaway rider in everyturn) and you have 60 energy poins per player. In a breakaway at full speed, at an average advance of 3 squares per turn, you need 26 turns to reach the finish line, which means 78 energy points. So anyrider with, say 80 energy points can safely think of climbing the whole race at full speed (quite less, in fact, since not all the race is uphill).

Since there is no team classiffication, what need is there to care for the third rider. You can probably give 90 points each to a couple of riders and race atfull speed all the race. Who cares id other riders save energy by drafting from you, when everybody has enough energy to reach the top?

I would suggest a geometric progression in the energy spending. ! energy point (EP) if you throe one die, 3 EPs if you throw 2 dice, 6 Eps if you throw 3 dice.

Anyway, I am waiting for the next boards to see how the game evolves. 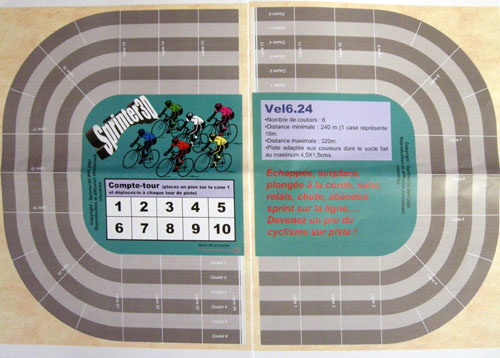 The track cycling game is quite different. It consists of a 6-tack 24-square-long velodrome (printed on 2 A3--sized panels) and features rules for different races. There were also two versions, one of them with rules for 5 races: Relais ŕ l'amériquaine (Madison), Vitesse Individuelle, Vitesse par équipes, Élimination and Keirin. The second version ("Grand Vélodrome") offered a nicer version of the board and additional rules for 5 other races: Demi-fond, KM individuel, KM en ligne, Poursuite individuelle and  Poursuite par équipes.

I will comment on those rules soon in a new section (not yet ready) which I will devote to track cycling games.

This game has been unavailable for a while, but it is back in 2019 with a new name (now it is called SPRINTOP), a new website and, according to Christophe Princay, ameliorated rules. If you check the website you will find new stages.  The new boards look quite similar to the old ones, but I I would say they are designed for smaller (4 cm) riders instead of the 5 cm Cofalus. Unfortunately most of them are not available yet at the time of writing, and I have not been able to compare the rules to see if the changes are important. I hope I can provide further information soon.