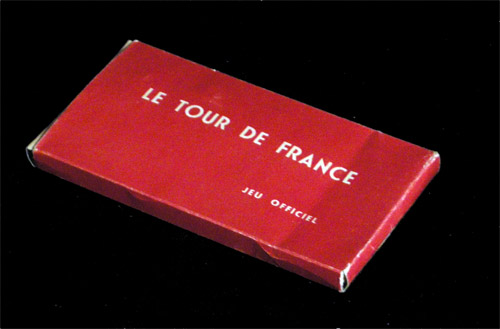 This game bears the inscription "Jeu Officiel" on the box, but it does not mention any makers name. Could it have been the Tour de France itself?. t the end of the rules we read "Imprimerie par J. LE HËNAFF. St Étienne"as the only clue about the origin of this game. But on the "board" we find pictures of six cyclists (Ockers, Watgmans, Gaul, Bobet, Koblet and Coppi) and, near Paris, Henri Desgranges himself, so after all it may be an official Tour de France release...

The contents of this (small) box are these: 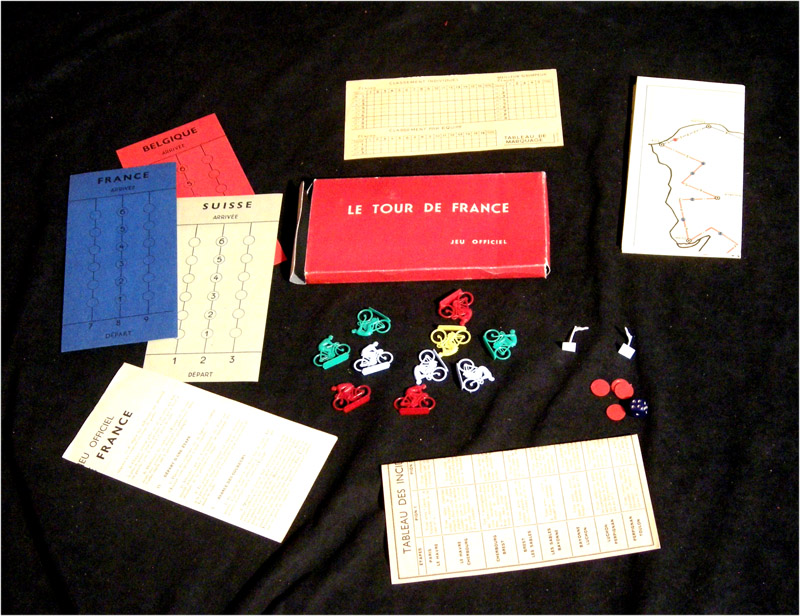 The game is played by 2 or 3 players, each managing a national team. Counterintuitively, the riders are not placed on the France map but on the three coloured cardboard smaller boards. Thus, the only teams available are France, Belgium and Switzerland (why are there pictures of Coppi, Watgmans ad Gaul then?). The yellow rider, as is not unusual in French games, is the leader and is supposed to replace one of the riders.

The game is a light dice game, but it is not (as you may expect) a game of goose. Maybe there is not much strategy involved but at least there are some  choices to be made.

Each stage is exactly 7 fields long and has some dotted spots (on the France map) which represent incidents in the race (according to the table included, see below) for the rider who falls on them. However, these dotted spots have effect only once in each stage. That's why we have four small numbered red counters: whenever a rider falls on one of these spots, he choses at random one of the red counters and checks what is the effect (good ot bad). The counter is pt apart until the next stage. Some stages have less than four spots.

The player, on his turn, throws the die three times (better get a couple of extra dice and throw them togeher) and choses the result that suits him most. With this result he moves one of his riders. What they surely mean is that he moves all his riders, each of them the value of one of the dice throws; that's not clearly explained, but it makes more sense.

If the player throws the same number three times, he may choose to move one rider the value thrown and replay immediately.

The first rider in each team to reach the finish line must do so by an exact throw. (The other two riders do not need an exact throw).

There are 16 stages (including one time trial, with different rules) and the yellow jersey is decided by points (what counts is the position of the rider in each stage). There is also a mountain classification, which is quite aleatory since the points for this classification are won by falling on the incident spots on certain stages and chosing by chance the right red counter.

This is not the game board. 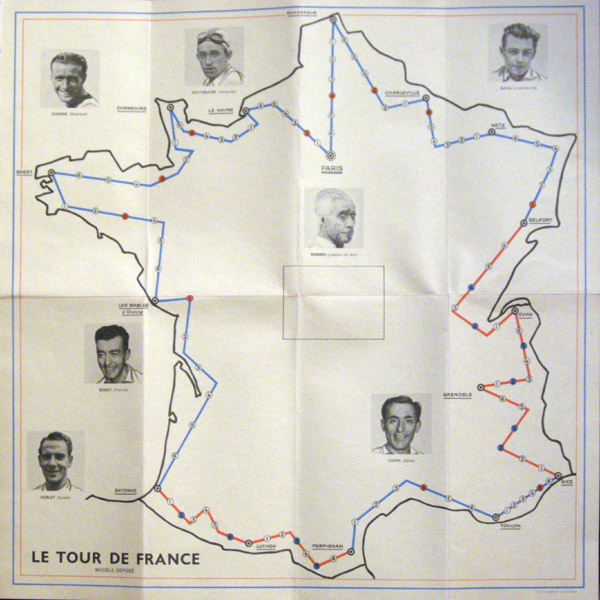 Instead, the game is played on these three cards. 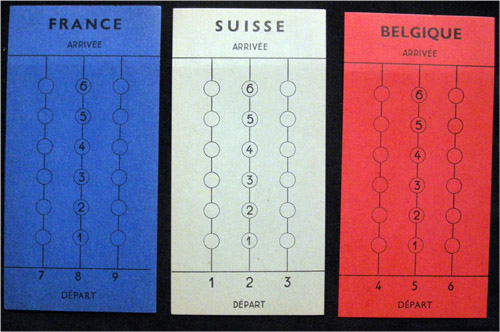 So don't let me fool you, these riders are misplaced! (I confess: I took the pictures before reading the rules) 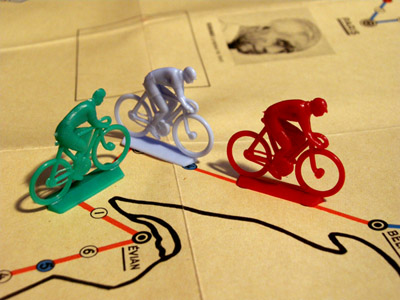 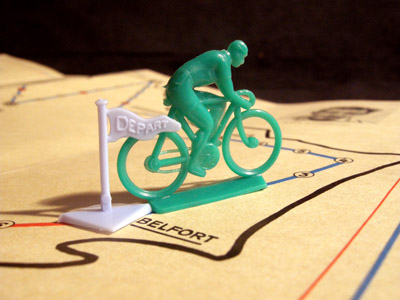 The use of the two small "DÉPART" and "ARRIVËE" flags is not explained.
Probably they are put on the map to mark which stage is being run. 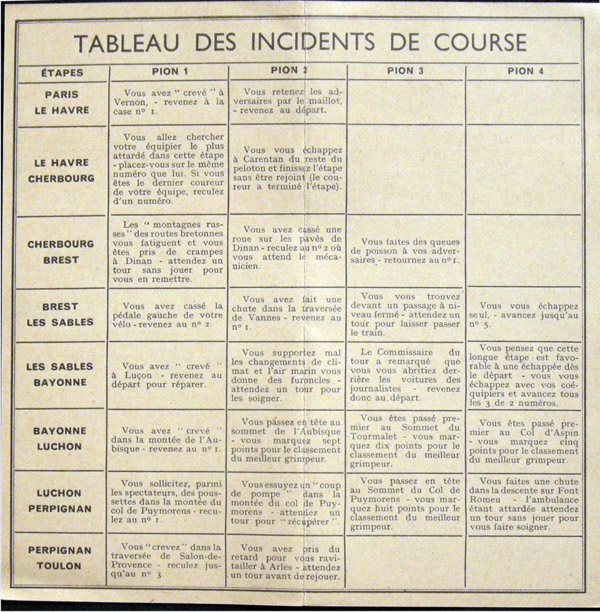 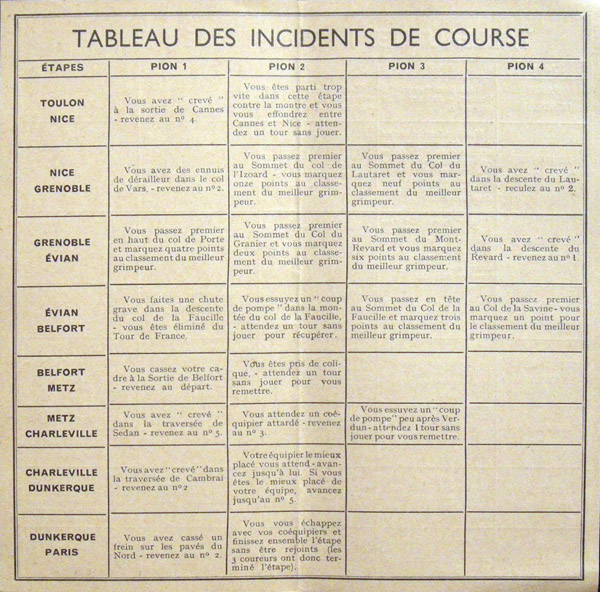 With this you can almost make the game. If you are interested in doing so, email me and I will send you the rest  ;-)

There is another (bigger) version of this game with painted cyclists. Thanks, François, for sending these pics. As you can see there are six teams (one rider missing in this picture), one of them Italy. That probably explains the six riders on the map. There are also three dice. 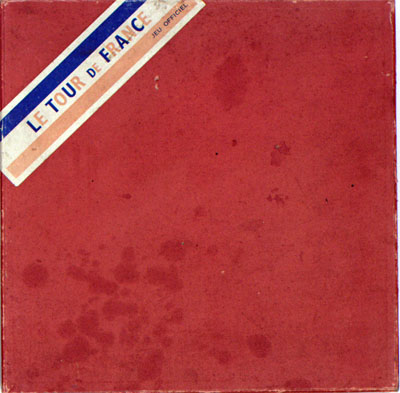 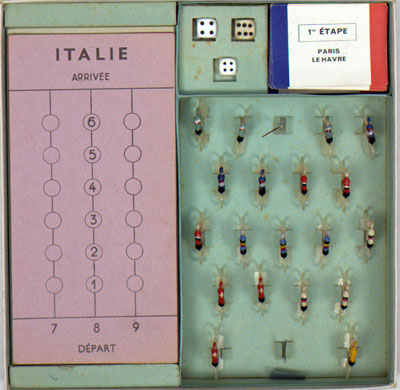