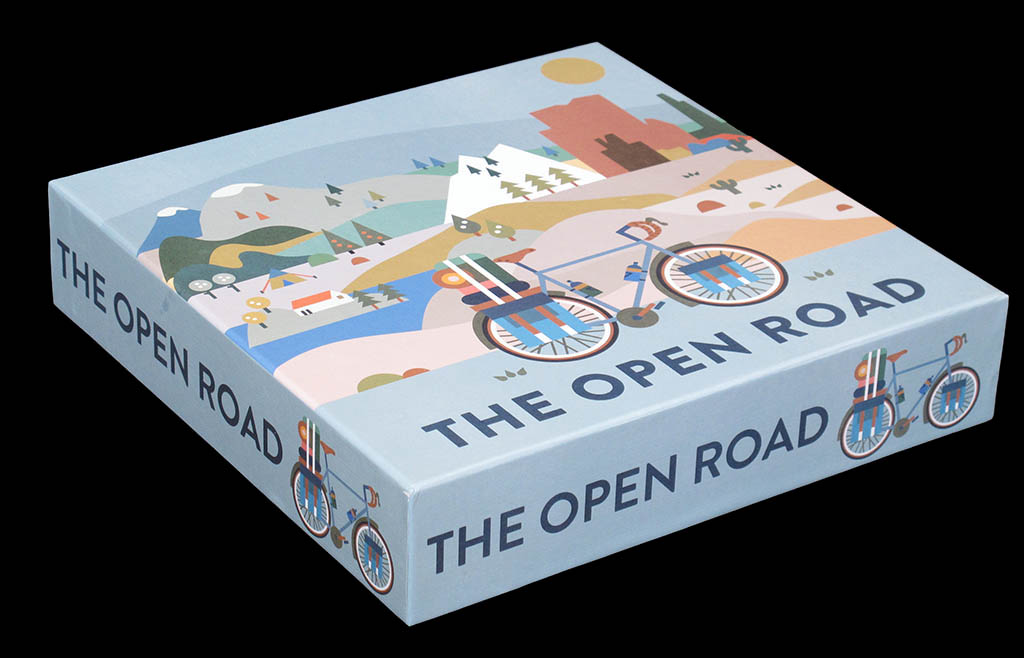 This is "a bicycle touring board game that mimics life on The Open Road". (The quote is from Blair Berg, "director of operations" at Open Road Games Ltd). This game was successfully funded in a Kickstarter campaign in 2017-2018 and, as is not unusual in these cases, the makers of the game set up they own company and website, both named after the game. In most cases we know how this story ends: the company disappears after either the initial edition of the game is sold out or they get tired of not selling it. In some cases the game is reissued after the first edition sells out only to discover that nobody else is interested (*). However, this seems to be one of the exceptions to the rule. In 2021 there has been a German edition of the game. Which is good news for European buyers who now can find the game and not be charged expensive overseas shipping and import taxes.

One of the things that made this game different form other self-published games is that looks very professional. Not only the materials, the box, the cards... match any professional game you might buy, but the illustration work by Dutch artist Saskia Rasink ups the ante. Games like these raise the question of where are the limits of the self-published games list. Should I include it there or it is "too professional"? So far, this game still meets my criteria and I have included it there. Furthermore, the guys at Open Road Games themselves have included a section on their website in which they explain how the game was made and which leaves no doubt that this game was made by two biking enthusiasts based in Colorado, and that if it looks too good to be true it is just because there is no reason why it should not in the first place.

By the way, their story about how the game was made would fit perfectly in the section about game making stories. I have not included it there because I just include stories that I know first hand -that have been communicated to me personally- and that are not available elsewhere. However, I consider the possibility of including more game maker's experiences in the future.

(*) Off-topic remark: this overestimation of demand issue not only happens to cycling games, or games for that matter, and not only to amateur publishers: Do you remember the "Bruce Springsteen Live/1975-85" box set? The failure was so big that it has even been obscured on the internet. The only thing you find about the album in a quick search is that it eventually sold so-many million copies, that it is one of the all-times best sellers, and blah blah blah. Maybe that's not false, but it is not the truth. They forget to say that this record ruined Sony's 1986 Christmas campaign, and almost ruined Sony/CBS themselves. They pressed millions of copies that nobody bought. They needed warehouses to handle the returns. And I am not saying this because I read it in some obscure website, but because I am old enough to remember it. My other self  has been in the music business for many years).

The object of the game is to journey from one coast to the other. Each player receives one East Coast, West Coast and Heartland card that determine the route she will take. Players also receive a "Side Trip" card indicating some bonus stops. With these cards players determine the best route to take, including whether thy start at the East or West coast.

Additionally, each player has a pannier (saddle bag) that they pack with energy and money cubes and playing cards. There are no dice in this game. Riders advance with the energy cubes: each energy cube allows to move from one dot to another. In each turn, players can advance their riders up to the amount of energy cubes in their pannier. However, even if the players have some strategic decisions to make, and the movement of the riders is not directly controlled by randomizers -such as dice or cards-, this game cannot be considered a game of no chance since the random drawing of the cards is what eventually determines how much energy a player can use to move a rider. 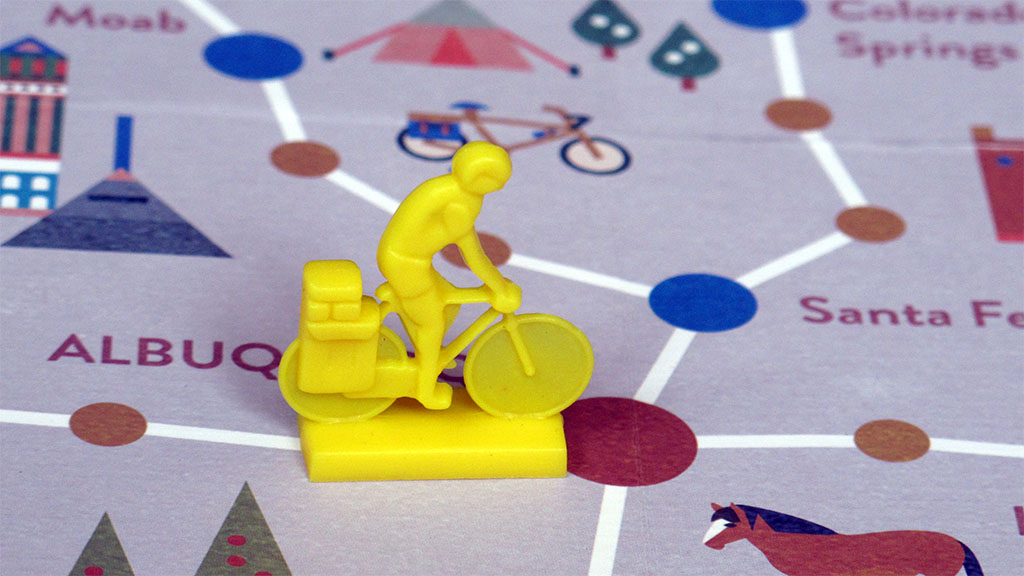 I do not remember seeing these plastic figurines before. I wonder if they were made specially for this game. Whichever the case, they fit perfectly the game theme. 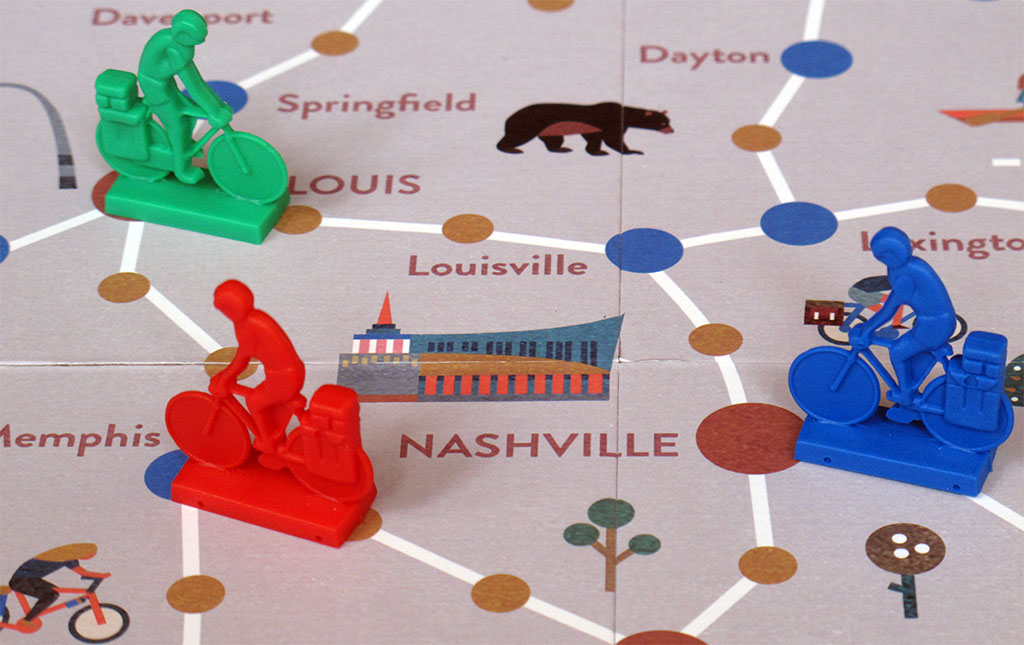 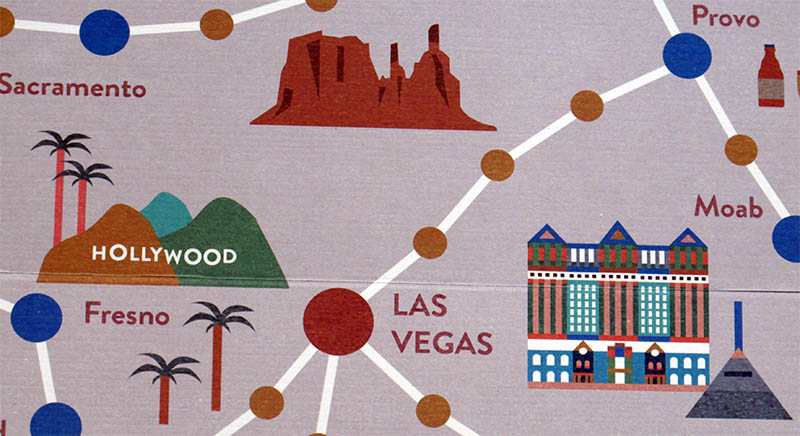 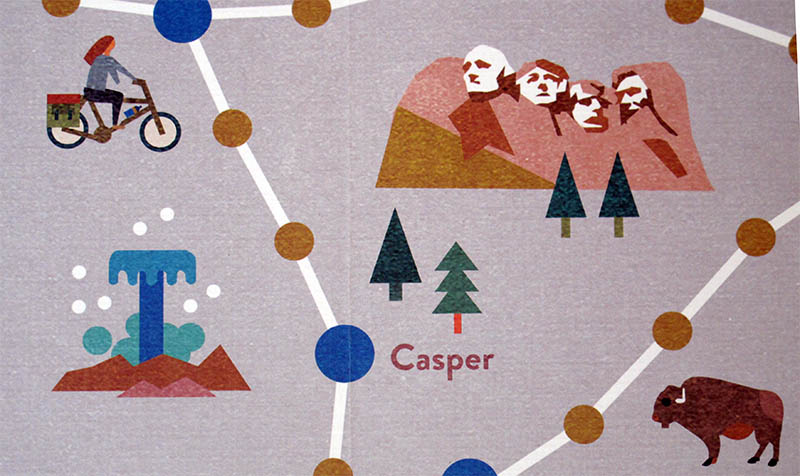 The board also features some of America's most iconic landmarks, of course. 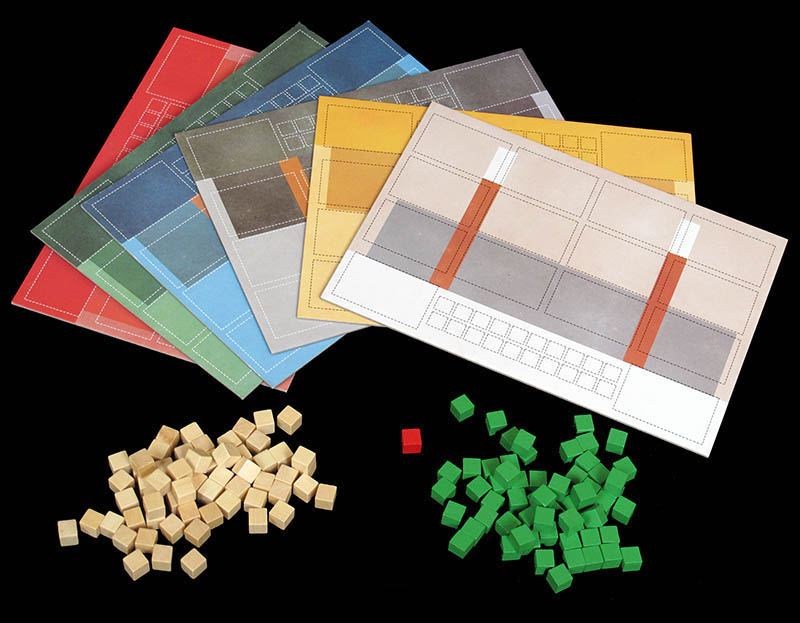 Energy and money are represented by wooden cubes. Money is green, of course. The cardboard pads are the panniers where players store the cubes and the cards. (The single red cube is a road closure, in case you wonder).

My favourite element in the game, though, are the cards. They are unusually tiny (only 52 x 34 mm), but it is here where the work of illustrator Saskia Rasink blooms in all its glory. There are six different "decks", with different backs. The ones with destinations are not so interesting (nice card backs with just the names of the cities on the other side), but the so called "playing cards" and "mother lode" are a completely different affair. I could buy a game just for these cards. 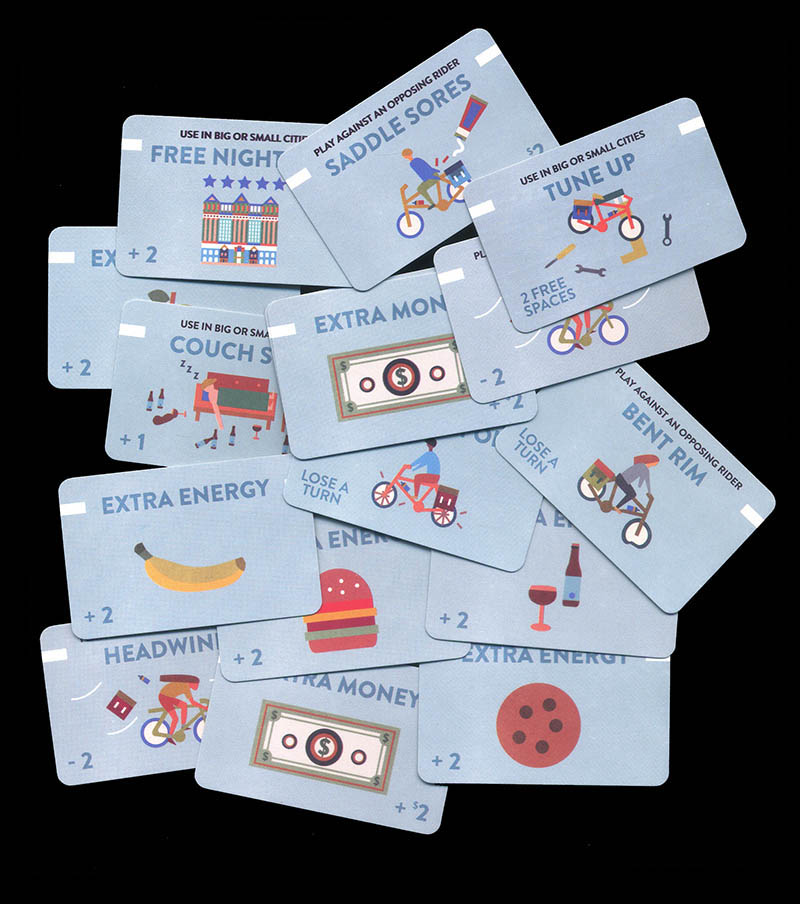 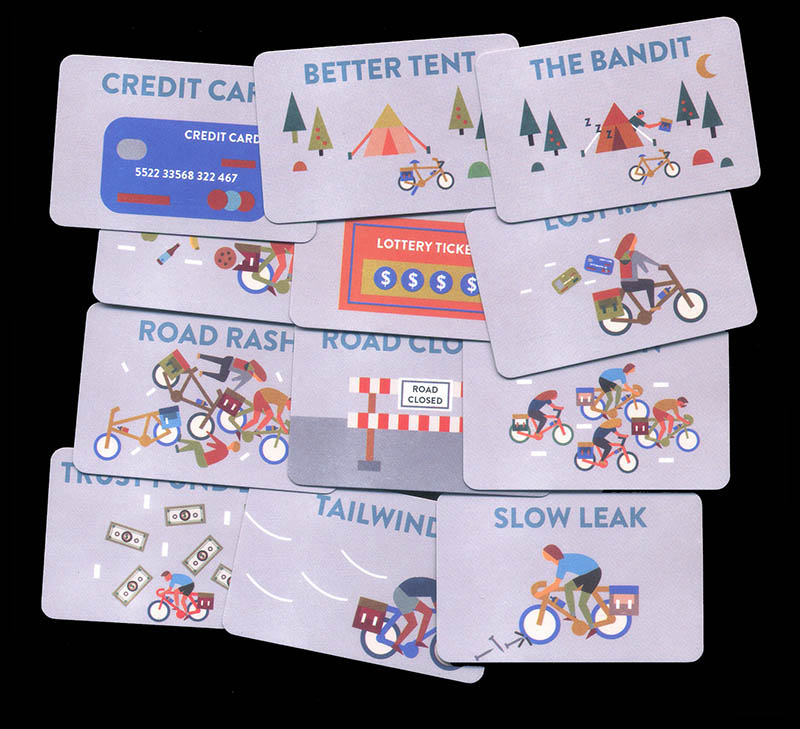 The Mother Lode cards are more decisive. You trade five ordinary playing cards for one of these. 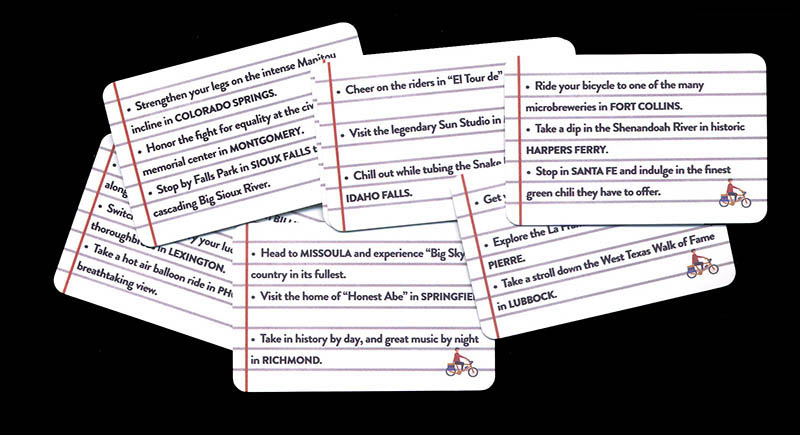 The "Side Trip" cards, bonus stops that you can make along the way to get extra money and energy, are not so beautiful and look like they were not designed at the same time (or even by the same hand) than the other cards. I wonder what happened there. Furthermore, though I have the German edition of the game, with the rules both in English and German, these Side Trip cards are only in English. Well, I guess they are not difficult to understand. You just need to read the CAPITAL letters.

Thanks François for sending this game.