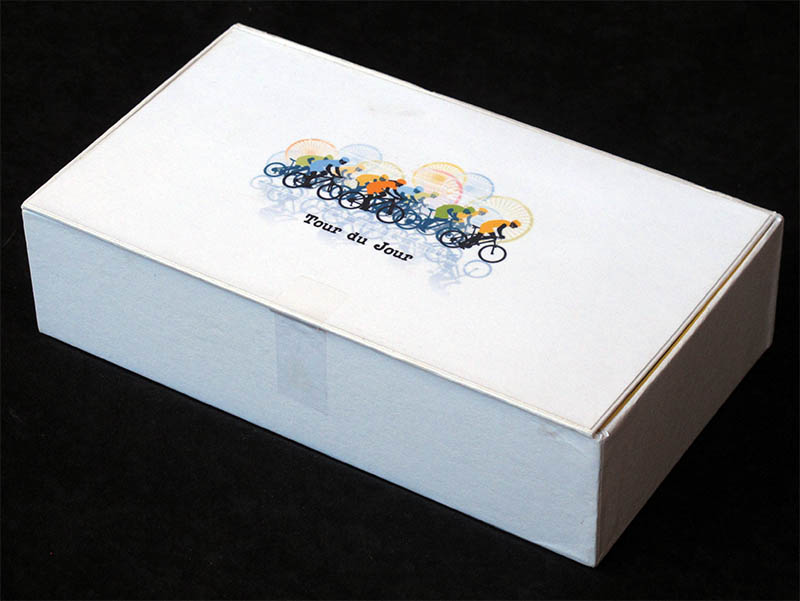 This is a game self-published by Ben Duiverman, a Dutchman living in the US, in the fall of 2014, and a strong contendant to the title of "the best game of the year 2014" if I were to made such a list (which I will not: unfortunately there are not enough games published each year, and anyway I tend to like them all).

The game comes in a simple white box, with the idea of saving on shipping costs. "Less box, more game", states Ben on his website. For all of us with storage problems, small boxes win some extra points. Inside the box we find a set of cute chipboard squares with which we can build different race courses, plus three longer squares for the special mountain finishes (l'Alpe d'Huez, il Plan di Montecampione and l'Angliru) . We also find 6 teams of 4 racers, a set of 40 cards (many of which are blank) and a 20-sided die and the rules (which can be also downloaded from the games' website). 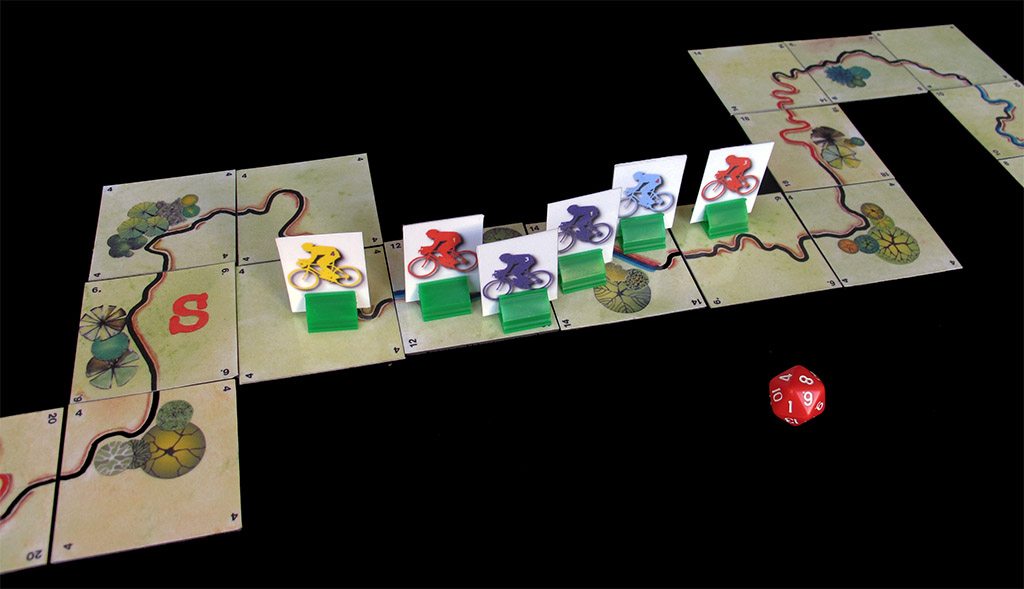 The mechanics of the game are quite unusual. While it is a dice game, it is not exactly a roll-and-move game. Each road square features a number that represents the degree of difficulty of the terrain, and the rider must throw this number (or higher) to advance to this square. This, as I have written somewhere else, represents cycling better than the usual rule (advancing the number of squares thrown). However, there are not many games that use it. I can only think of  the (much simpler) Pâtes Brusson Tour de France game, of which I wrote when I included it in this site: "I may someday try to improve this game, adding more riders per team and trying to find some tactical variations". Well, this is more or less what Ben has done. (For the record, the  Pâtes Brusson game does not use dice but chips; however, they are equivalent to a D5). 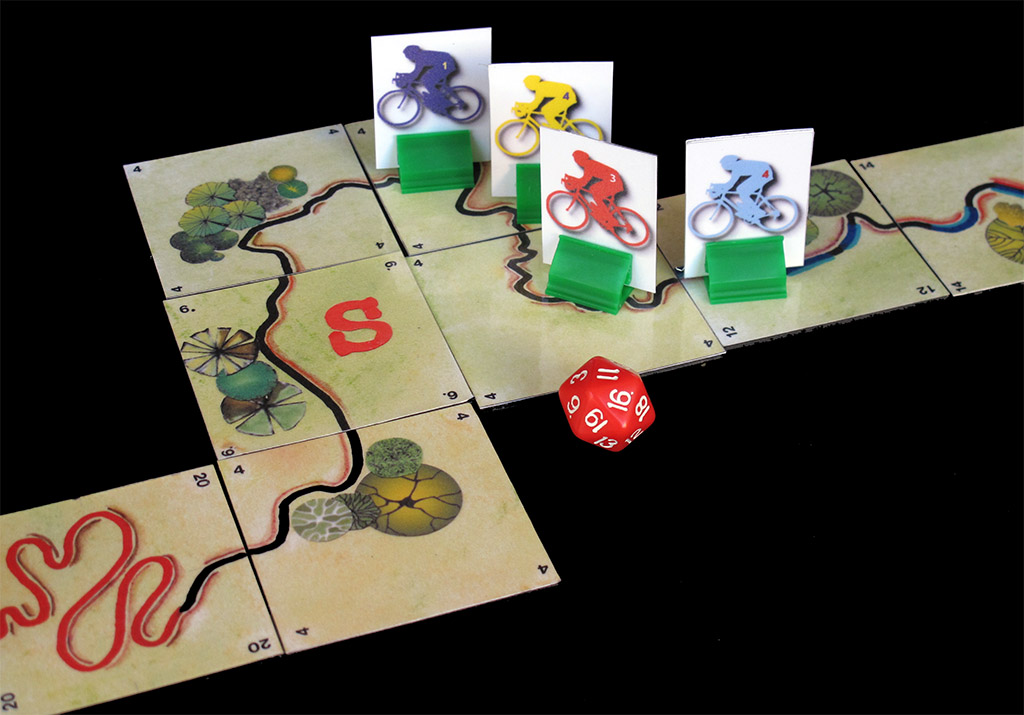 Of course, the question which arises with these game mechanics is what to do with the unused points. I mean, if your rider faces a succession of squares marked "4" and you roll, say, 16, should you advance 4 squares, or should you simple move to the first one and lose the rest of the roll (or maybe gain some energy points, or some other alternative advantage). In this game, Ben's decision has been to move forward the full four squares. This is an intuitive rule, of course, but one which , IMHO, brings the game closer to the roll-and-move type. However, do not understand this as an objection, but simply as a technical comment. 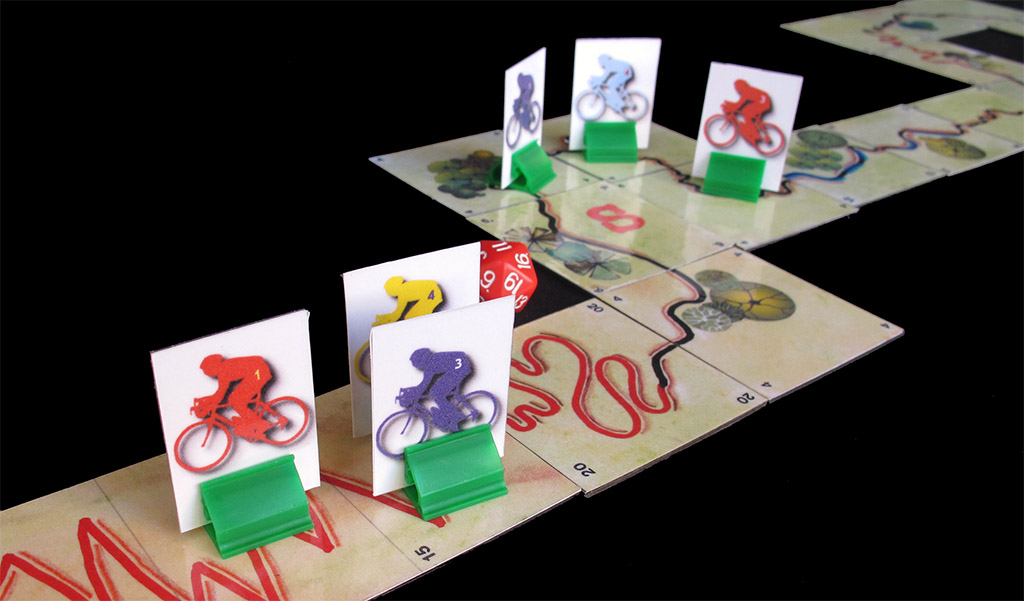 The game offers the possibility to play one-day races or to play stage races. As is often the case, the rules for keeping the different classifications are not specially original or remarkable, but then again, who needs them to be so? As the games rules say, they make the game more interesting and complicated. 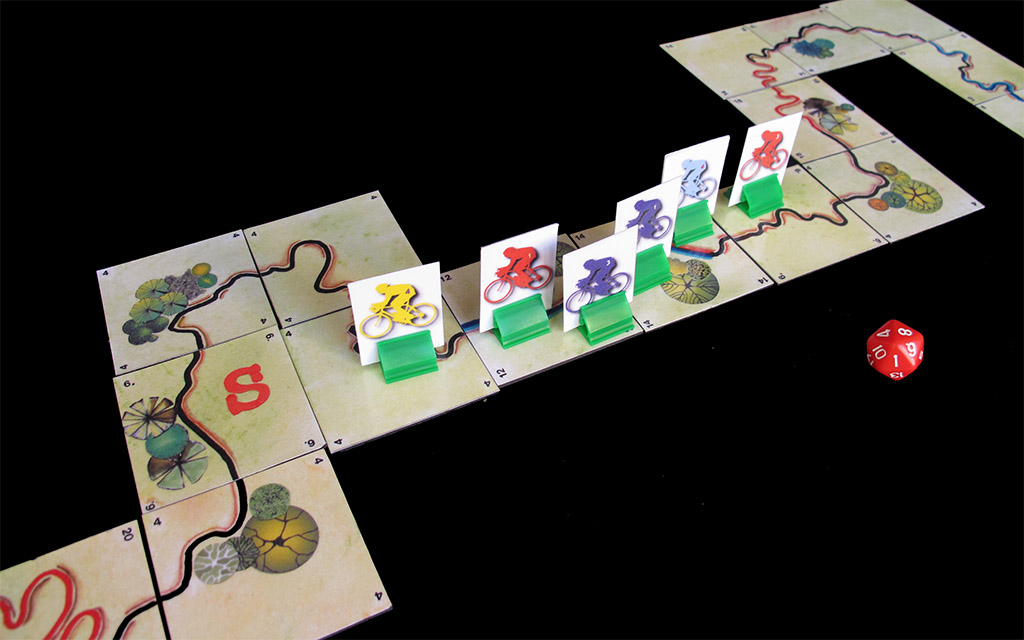 The game features some "events" cards. Every time a rider moves ahead a tile, he must draw one of these cards. Most of the cards are blank, and the rest are mostly bad news (though not all of them are). Cards must always be displayed for all the players to see, their instruction followed at the player's next turn and returned to the bottom of the deck. 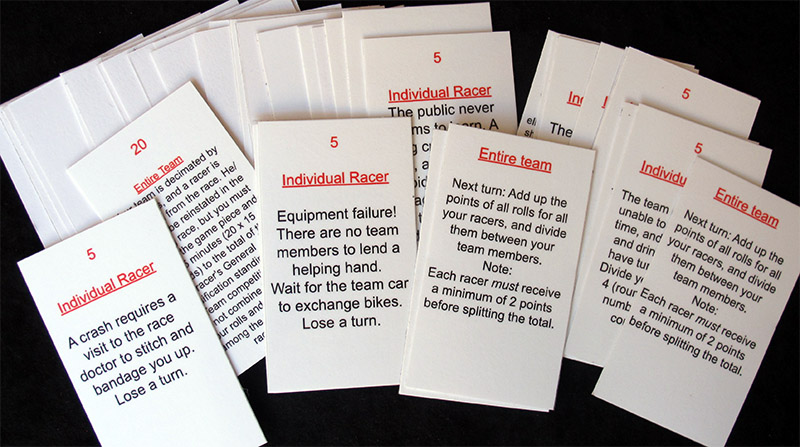 If one has to find some objections to the game, they are the usual with self-published games. The first stages of the game design are sound and well thought-of, while the last minute changes are easy to spot. In the case of this game, for instance, there are three coastal tiles with a crosswinds rule that, while interesting, should probabbly have been included as an advanced optional rule.

Another objection which is also a common feature in self-published games is promoting the game as "The World's Best Cycling Racing Board Game", as if such thing were possible, even desirable. (I am sorry, Ben, I had to say it!).

As those of you who checked the (old) website probably found out, this game has been unavailable for a while. Fortunately it is back. There is an improved version of the game, a new URL for the website, and even a kickstarter project (not active yet at the time of writing).

The rules have been rewritten for this new version of the game (*). Now we have basic rules and advanced rules (which is good for clarity. One of the advanced rule includes the use of game money, a so-called "emergency fund" which may be used in different ways during the game. Its main use is to add to the roll if it takes too many rolls of the die to conquer a certain tile and your racer is falling too far behind, but the fund may also be used to pay off certain penalties and bad luck circumstances. I have written elsewhere that I am not a big fan of game money in cycling games, but since in this case it is included as an optional rule, then of course I cannot have any objection.

This new version of the game will include expansion packages, such as the Tour de France, Tour de Suisse, Criterium du Dauphiné, La Vuelta 2019, which you will be able to print and compile yourself. A few sample stages are available for download here.

(*) Unfortunately the rules seem to have disappeared from the website. However, since the new website is not finished, they will probably be available online soon.