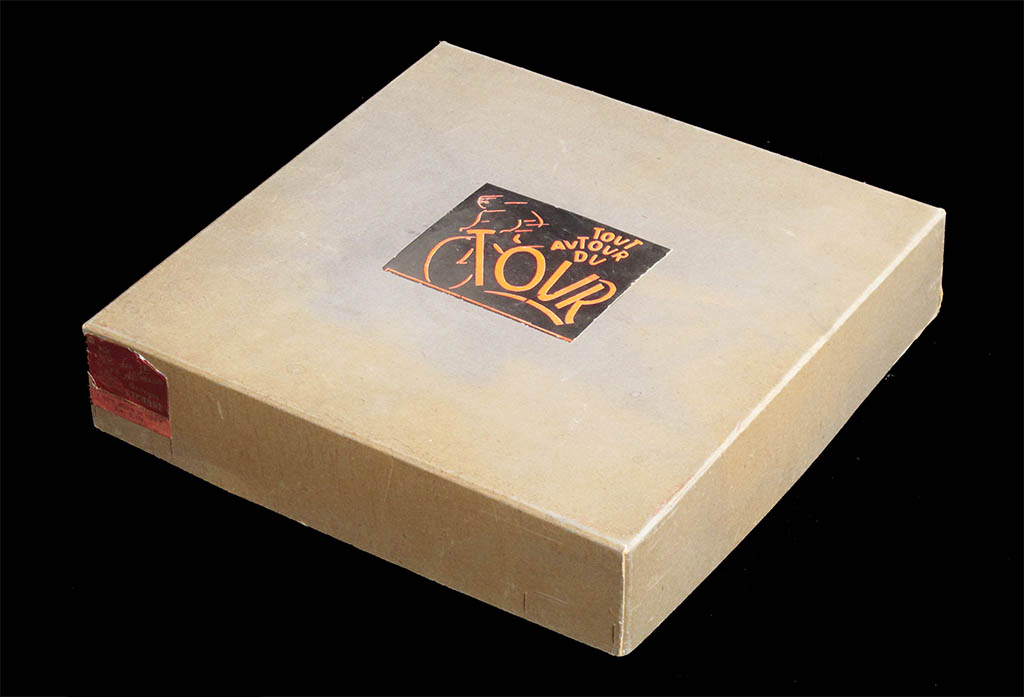 Here is a different kind of board game. At first sight it does not look like a board game, but rather like one of those carousels, that can be children's toys or betting games, depending on th theme and age of users. In fact there is an similar game of the same title (scroll down for a low-resolution picture) which is just a carousel.

However, upon a closer look, one can see a France-shaped track on the board and, what's more important, a set of rules included in the box. 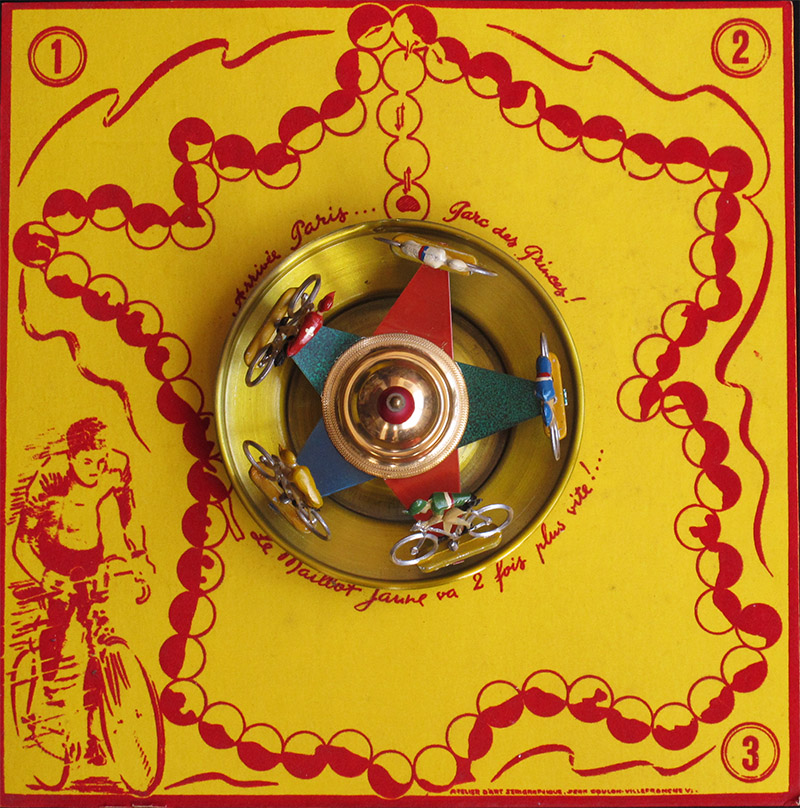 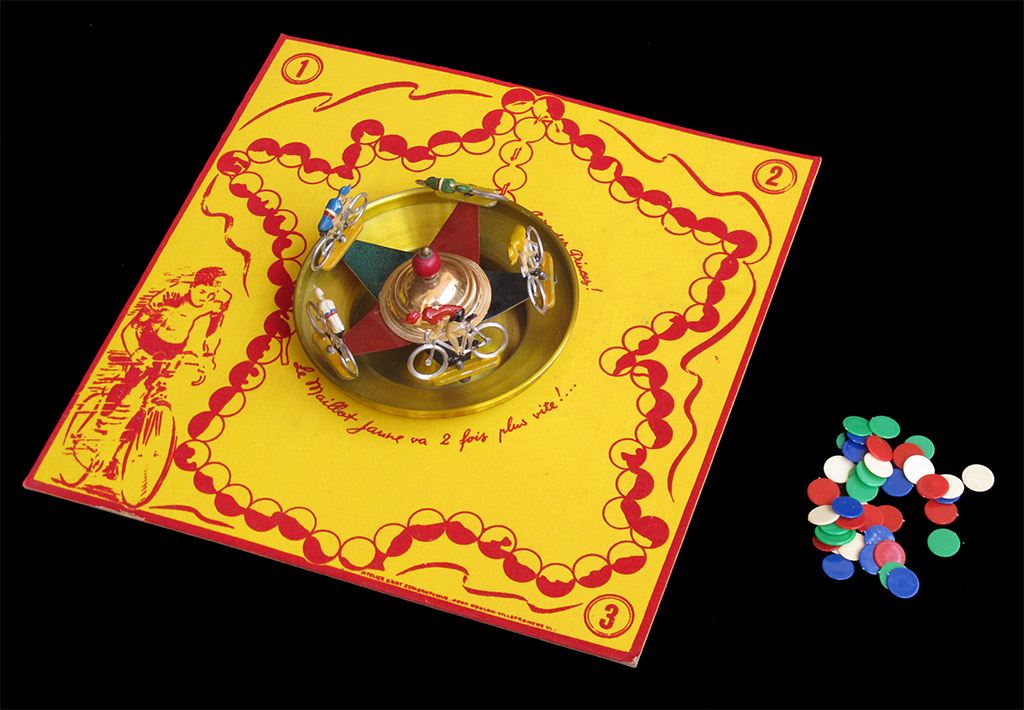 According to the rules, the game is supposed to be a stage race, but I will rather file it under "unrealistic games". Each player choses a cyclist (not the one with yellow jersey). The riders are spinned, in turn, by all players. The cyclist whose front wheel touches or passes the goal scores one point for its owner, if it is not the perso who spun the riders, two points if the rider belongs to the player who spun, and three points for the playe who spun and an extra spin if it is the cyclist with thew yellow jersey..

When all players have spun, the "stage" ends and the rider with mosty points gets one extra points as a bonus for winning the stage. Then all players advance a pawn of their colour on the France-shaped track as many fields as points they have scored in the stage.

If two counters fall on the same field, they crash and cannot score in the next stage. 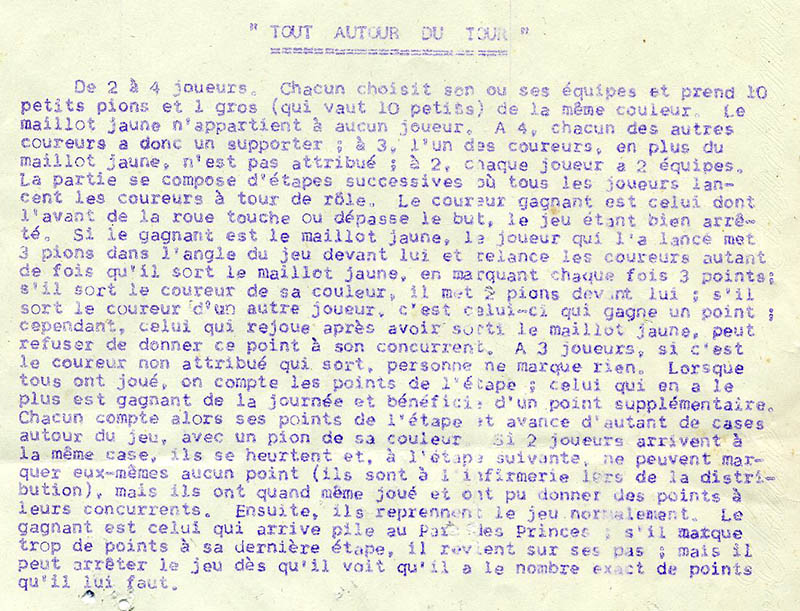 The rules are carbon-copied. 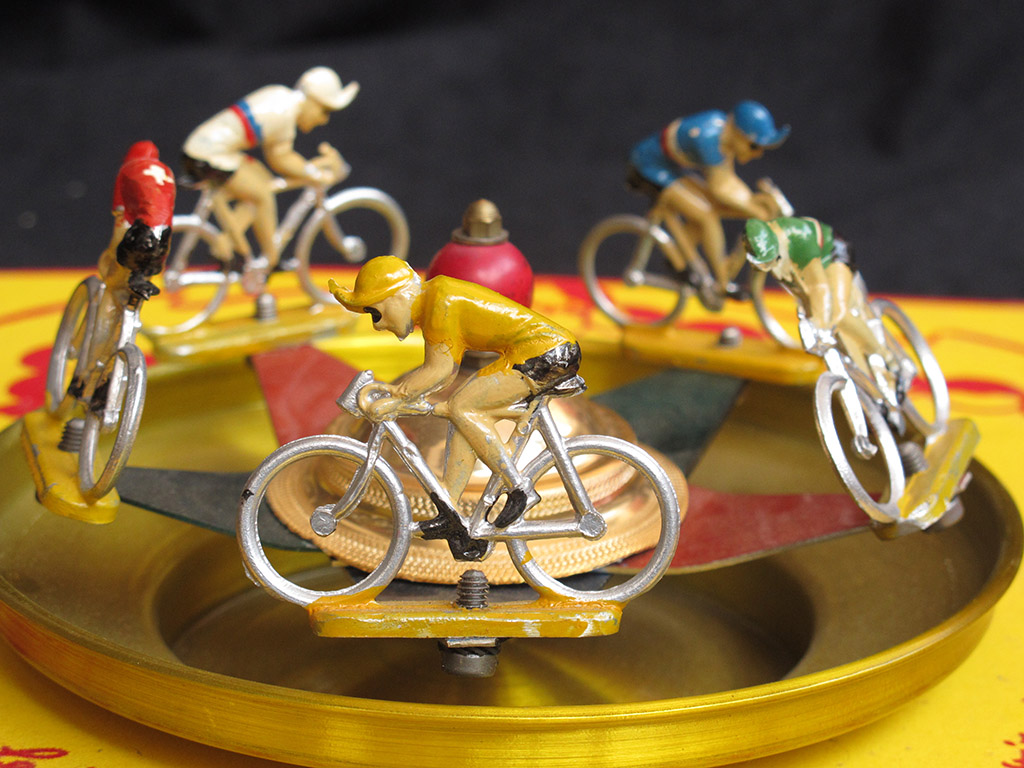 The riders are Aludo miniatures. 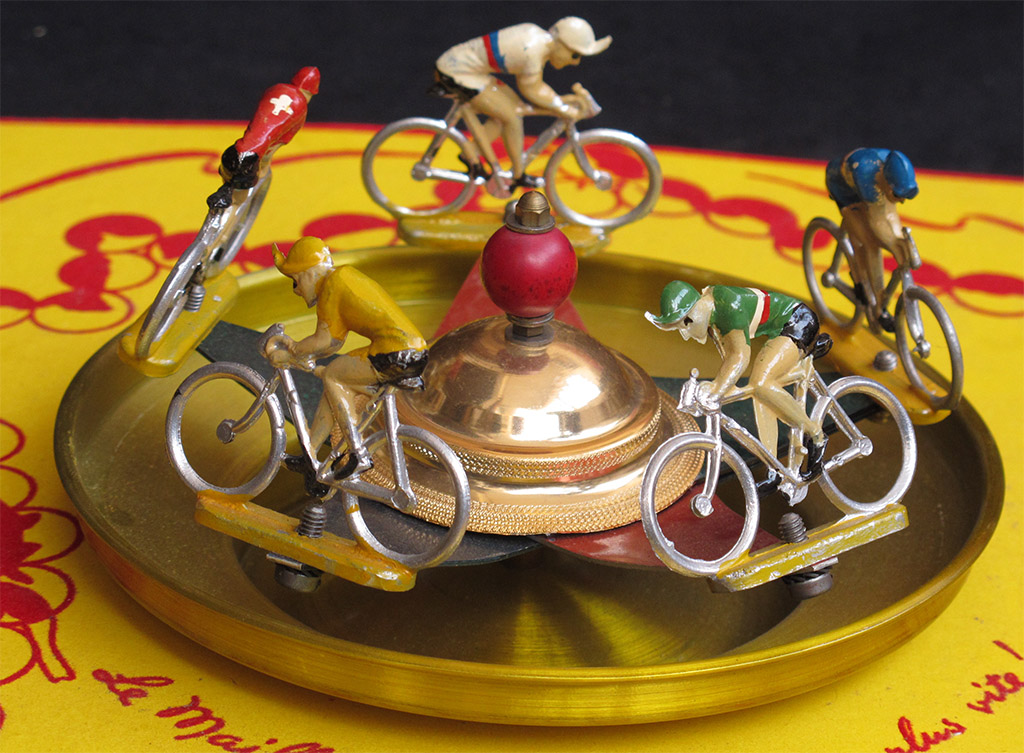 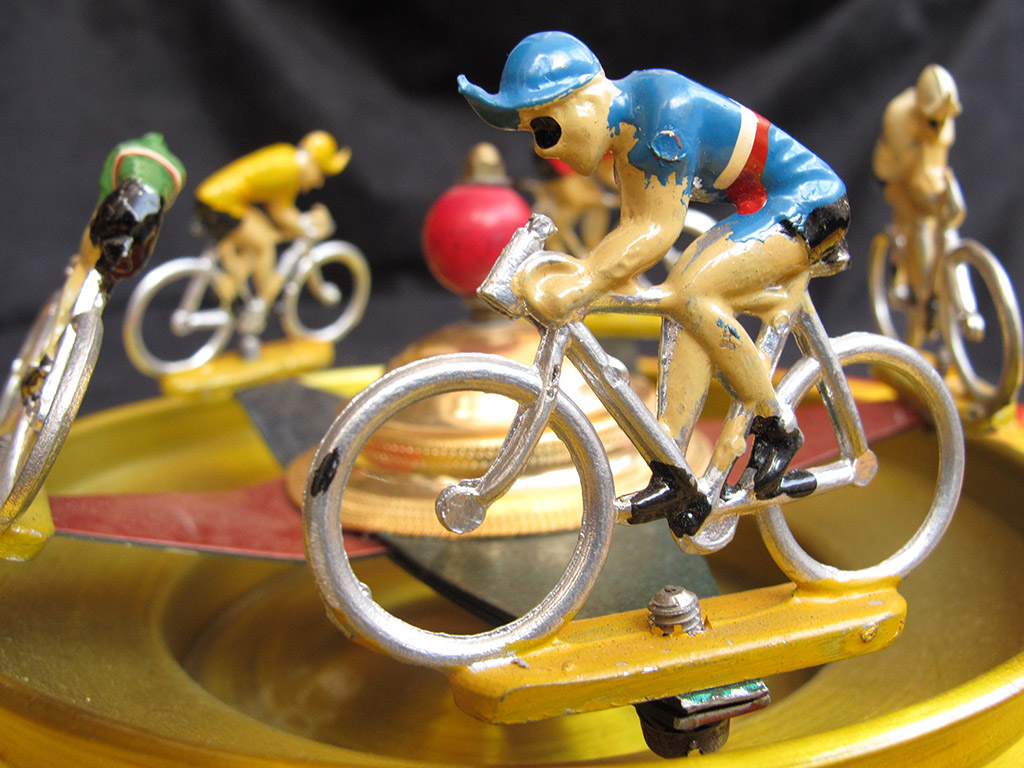 By the way, I have in my collection 7 other Aludo riders, two of which have a hole in the base exactly in the same place these riders are drilled, so they may come from a similar game. 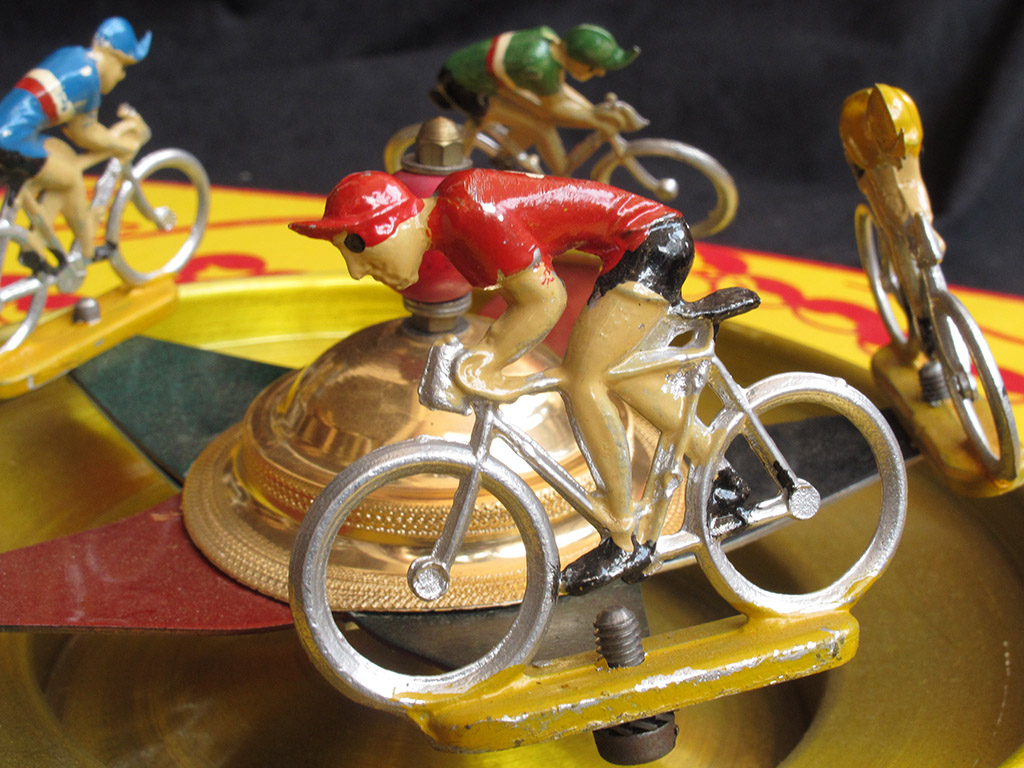 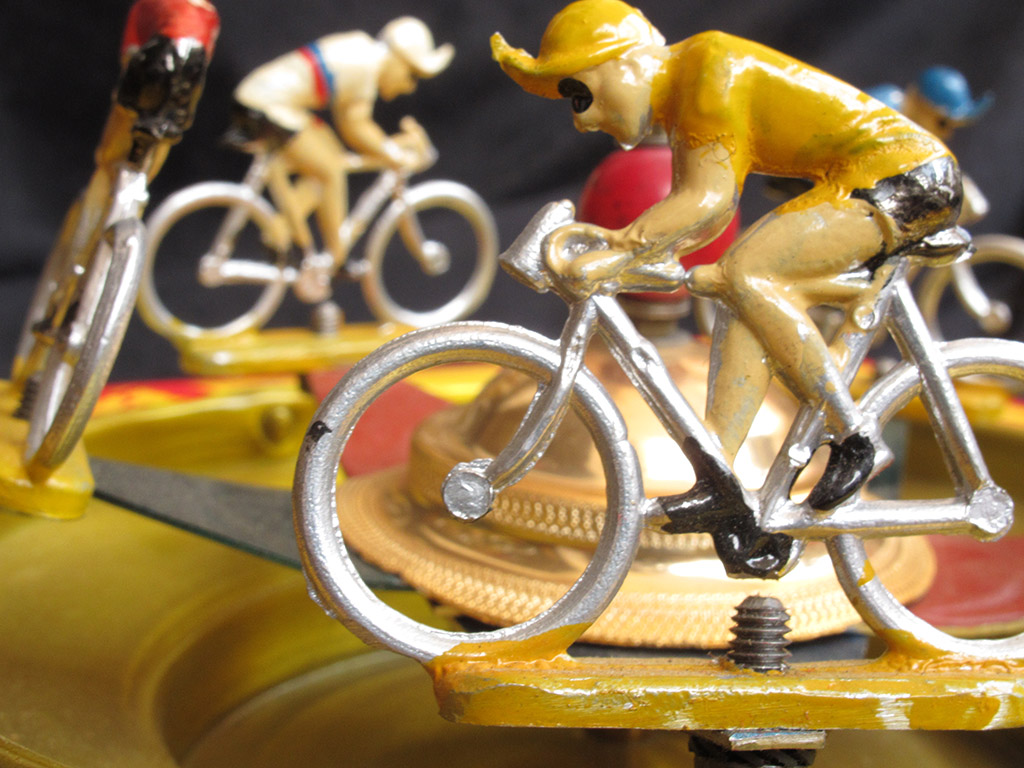 This game is quite mysterious: On one side of the box there is a sticker which says "Les jouets Aluminium Georges Richard", but on the board we find the inscription "Atelier d'Art Sťrigraphique Jean Coulon Villefranche V".  There is a different version which is not a board game. It uses Aludo riders, and I have some independently bought Aludo riders that may have belonged to a similar game. The rules are carbon-copied and the box  looks like it has been reused...

All that can be said for sure is that it is a small artisanal edition. 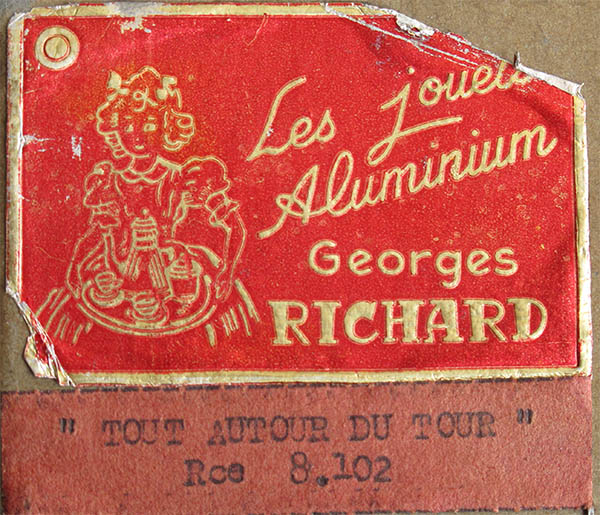 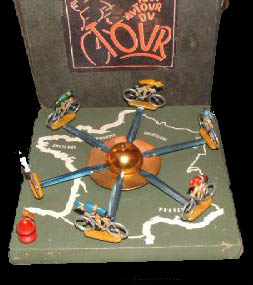 Similar game which is NOT a board game.