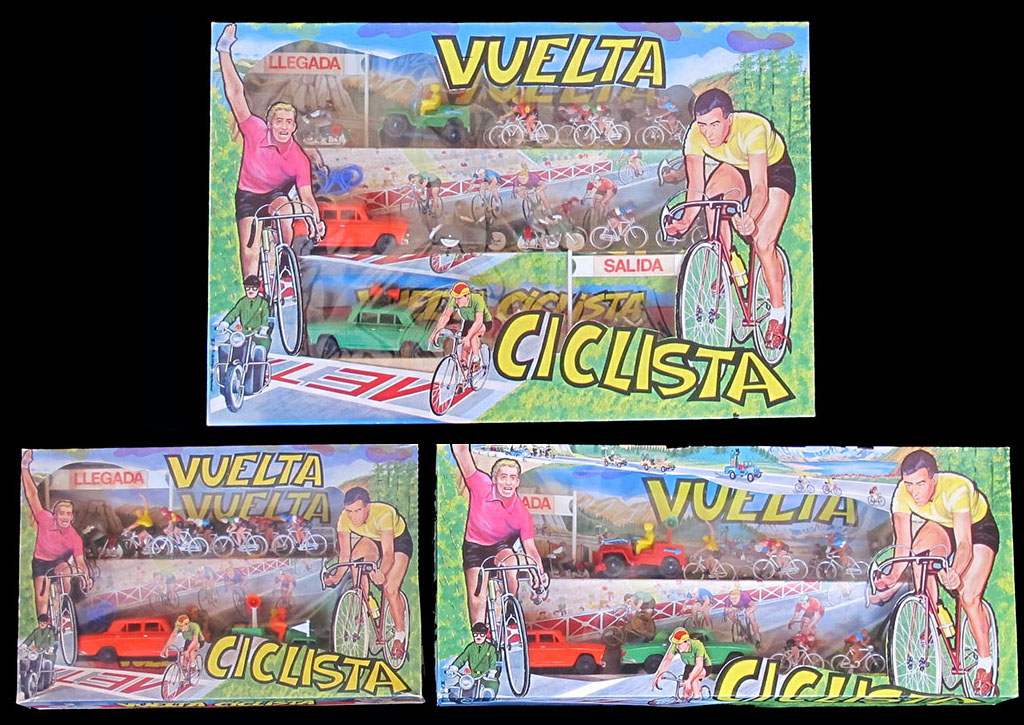 Manuel Sotorres is by far the better-known of Spain's toy cyclists manufacturers, though he was not the only one. Cyclists were only a small part of his production (he mainly sold toy soldiers). The company started in 1954 and folded in 1975. He used several acronyms: "P.H.", "P.S." (standing for "Plásticos Sotorres") and finally "M.S." (the letters forming an Indian) . The three big "Vuelta Ciclista" boxes including supporting cars and motorbikes had a huge success in the early 1970s. I was offered the bigger of the three (I must have been 8 years old or so). It was one of the best presents I have ever received in my life (thanks again, mum!). Of course my box was torn apart in a few seconds. Kids did not keep the boxes (Sotorres boxes were nice to display in a shop, but not specially useful to keep the figurines in). Sotorres had been impossible to find for decades (I know because I looked for one for decades) until in the early 2000s some where found in a long-closed warehouse. I was able to buy again the box that I had when I was a kid, and the two other boxes too. At the moment of writing, you can still find some copies, mostly of the intermediate ("long") box, at a ridiculously high price. 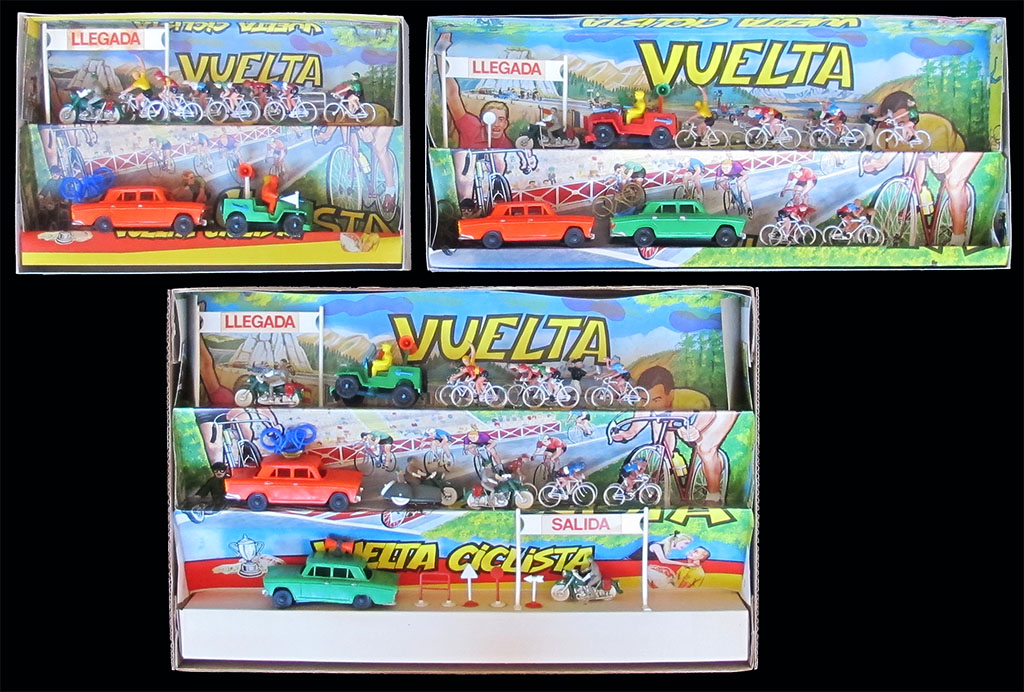 Sotorres also sold cyclists loose, or in smaller, less glamourous boxes. However, the smaller boxes were not found in that warehouse in the 2000s and are therefore very hard to find. 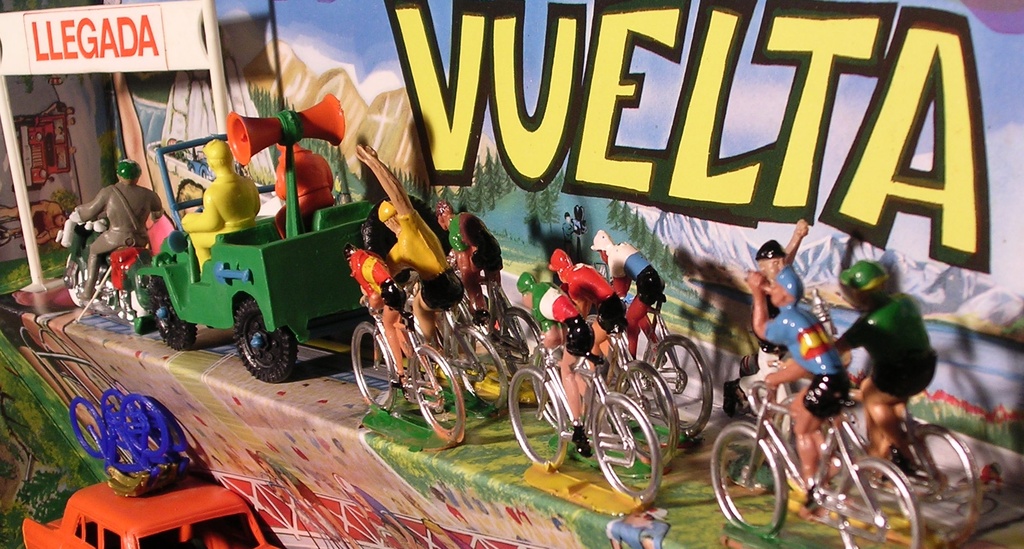 As I said somewhere else, the cyclists shown on the main page are made by Manel Sotorres during the 1960s and 1970s. The are the ones with which I played when I was a kid. Some of them might even actually belong to the big Sotorres box that my mum bought.

Sotorres cyclists are some 54 mm long. As you can see, they were "heavily inspired" by French Aludos (left), Starlux (right) or Salza (the guy handing the water bottle, and the riders with green and yellow maillots in the picture above). I quote from Juan Hermida's Plastic Toy Figures Made in Spain 1948-1978  (see bibliography): "Artistically speaking, the greater part of [Sotorre's] catalog consited of copies of Starlux, Clairet, Reisler and Elastolin. We only find original figures in the series of cowboys and Indians". That was not unusual in Spain's toy production back then. 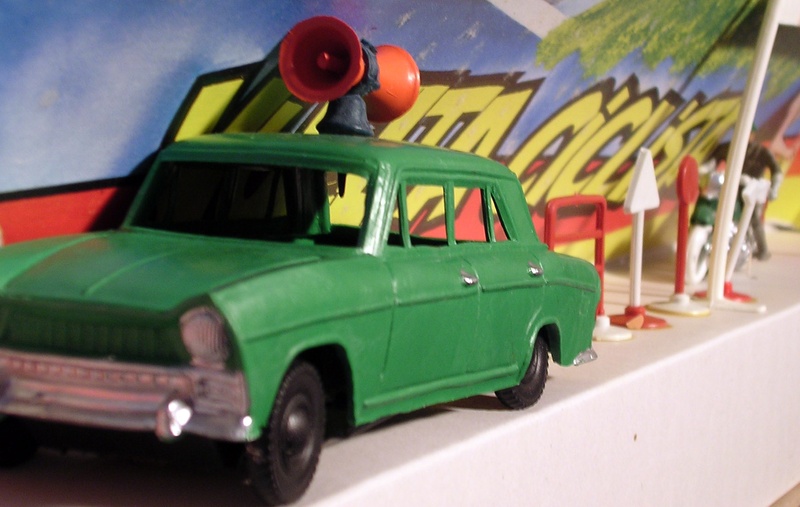 On the other hand, the cars might not have copied from foreign models. This is a Seat 1500, a hugely popular car in Spain. Of course, it is similar to a FIAT but I do not remember seeing these model cars in Italy. Naturally, you cannot compare these unpainted cars it to French metal "Caravane du Tour" vehicles, but you cannot compare 1970s French and Spanish economies either. 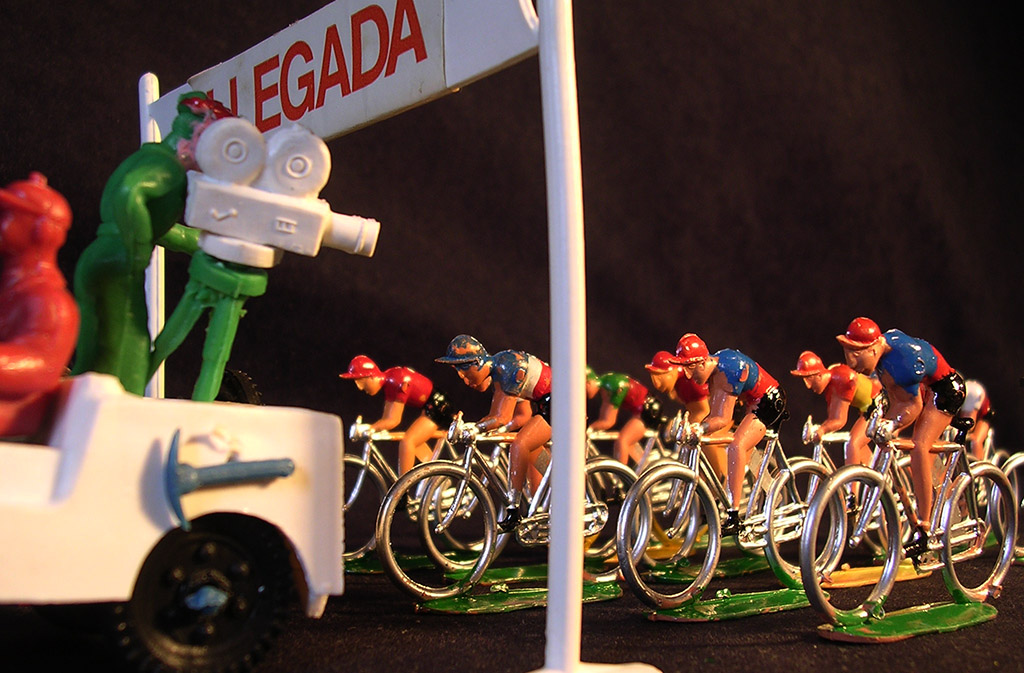 Whad did appear in the aforementioned warehouse in the early 2000s was a vast amount of cyclists of the Aludo-inspired type that flood the market for a while and which you can still find these days without difficulty (at lest in Barcelona).