If you browse the games featured on this site, you will find many that include cycling figurines. However, figurines were often sold separately (not as part of board games), and they used to be very popular. In France, "les petits vélos" were sold by the millions, but France was not the only place where these figurines were made or were popular. Kids from other countries also played with them. Times change, though, and these figurines are not so popular these days. Just a few scattered brands produce them, and the target market is not children anymore but rather grown-up adults who played with them as kids. As Alex Poyer remarks in his article Les figurines cyclistes: entre identification, héroďsation et collection? (1890 ŕ nos jours), "after thirty years of golden age, collectors, former baby boomers loyal to the hero, save them but allow them in their aspect of the 1960s."

Information about cycling figurines is abundant (check the link page and the bibliography) but not always accurate. Most people writing about them are collectors, not historians, and although their knowledge may be vast, too often they don't take the time to check the accuracy of their sources. Furthermore, in these days of the internet, blatant errors are frequently copied and disseminated. This said, I do not pretend to be better than anyone else, but at least when I take information from elsewhere, I try to acknowledge the source, and when I make mistakes, I claim them as my own. Be warned, this website is by no means free of mistakes.

By the way, the cyclists shown on the main page are plastic Spanish figurines made in Barcelona by Manel Sotorres during the 1960s and 1970s, the ones with which I played when I was a kid.

A lot has been written about French cycling figurines, so I am not insisting on them. Just let me tell you that when I was a kid (in the 1970s), crossing the border was, above all else, very expensive for anyone living south of the Pyrenees since the Spanish currency, the peseta, was greatly devalued compared to the French franc. However, I still had a few French riders from our rare trips to France. The ones below these lines are some of them.

The online information available on Spanish figurines is scarce and frequently wrong (specially on non-Spanish sites). The same mistakes are copied and repeated over and over. The most common mistake is to adjudge every Spanish cycling figurine to "Mariano Sotorres". I would advice you not to trust any information that only mentions Mariano Sotorres cyclists, not only because there were other Spanish companys (most of them based in Barcelona) that manufactured plastic cyclists, but specially because there was never a company called "Mariano" Sotorres! The "MS" on the Sotorres brand stands for MANUEL Sotorres. (By the way, I confess guilty of having mentioned "Mariano Sotorres" myself. I hope I have learned from my past mistakes).

This said, if you are interested in Spanish toy figurines (mostly soldiers), you may want to check the monumental (over 650 pages, 30x30 cms, 4300 grams) book Plastic Toy Figures Made In Spain 1948-1978 by Juan Hermida (check bibliography), if you are able to find it.

The first Spanish racing cyclist figurine might be a pre-war one made by Baldomero Casanellas. Casanellas made metal soldiers, among them some cycling soldiers and he made at least one racing cyclist. If you can read Spanish you may want to learn more about him here. 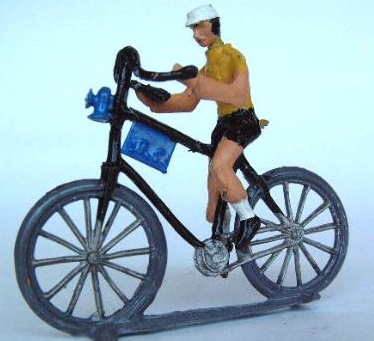 Casanellas cyclist (found picture, the cyclist was described as being 50 mm long)

I have divided the Spanish cycling figurines in four sections:

SOTORRES - The nicest boxes a kid could get

MONTAPLEX - Surprise bags for all

OTHER SPANISH FIGURINES - Many more, but not always identified

These are a different kind of figurines, but they have also manufactured cycling series. 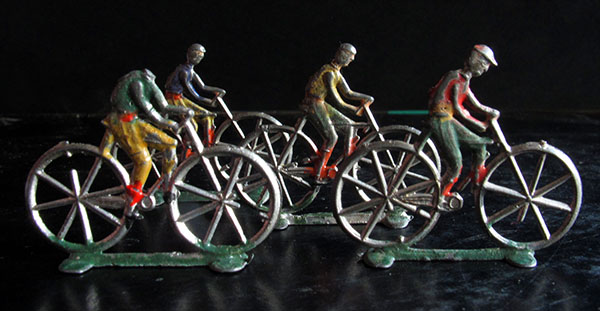 Small (3 cms) English turn-of-the century tin riders, which surely belonged to a board game. If you know what game they belong to, please drop me a line (I have a clue, but I am not really sure...). Sadly, one of the riders is beheaded.