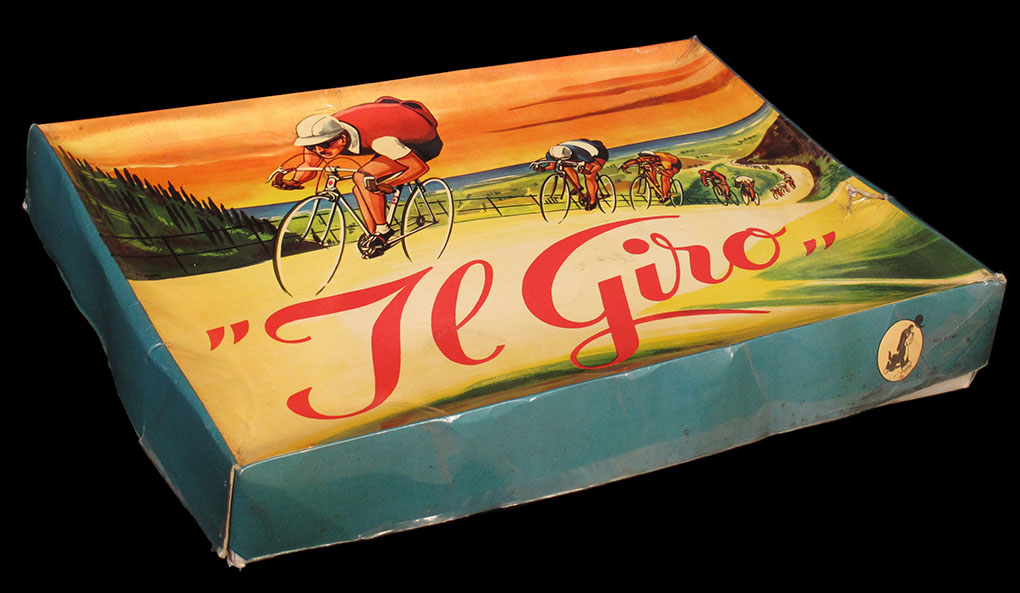 And then I received this fairly obscure (*) Italian game and I discovered it could be done.

(*) Fairly obscure and anonymous: The only reference to the game maker/publisher is the image of the dog on the side of the box. The illustrations, though, (both box and cards) are signed "Magoni". I do not know who this Magoni can be and, wrong or wright, I generally do not credit games to their illustrators unless I know something else about how the game was made. I know this can be unjust sometimes since the making of some games -specially modern games: I am thinking of Flamme Rouge, for instance- involves more creative people than can possibly be credited. 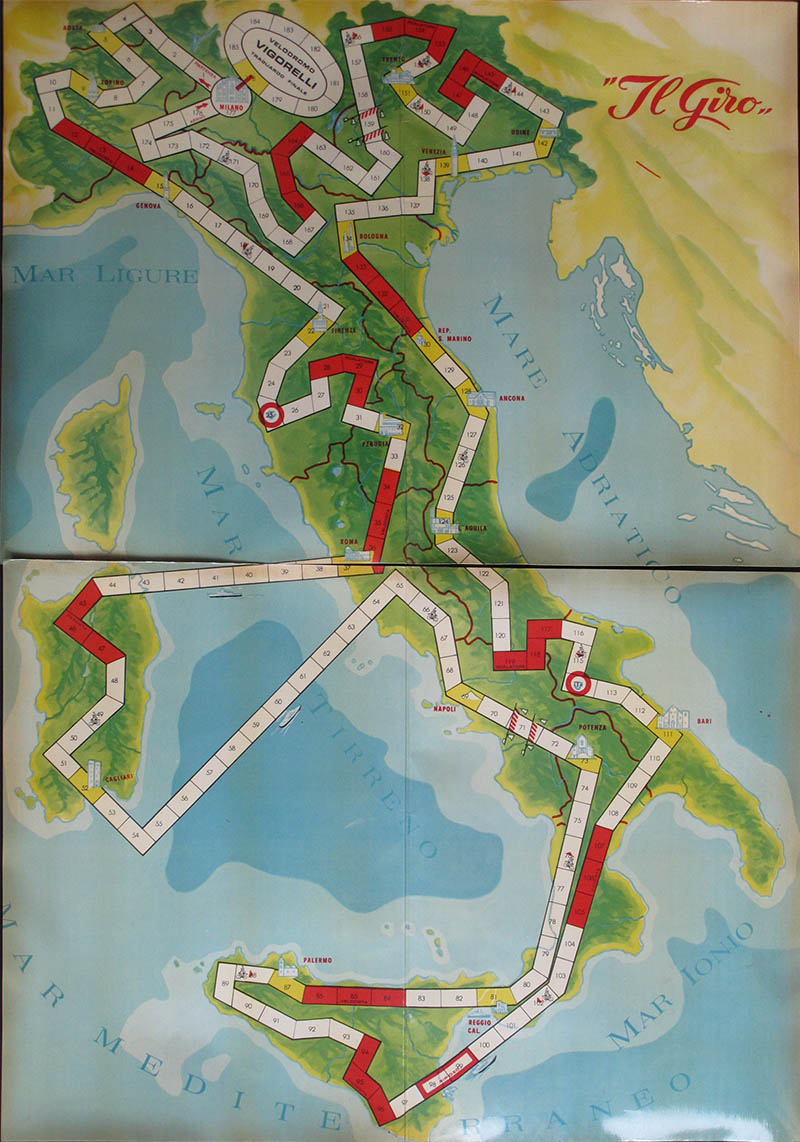 The game comes in a big nicely illustrated box (50 x 35 x 6.5 cm), and has a huge (95 x 66 cm) board inside which represents a Giro d'Italia. The race course is quite similar to that of the 1961 Giro, which celebrated the Centenary of Italy's Reunification and featured stages all over the country, including Sicily and Sardinia. The latter is quite unusual: the Giro has only visited Sardinia four times (1961, 1991, 2017 and 2019). However, the race in this game starts and ends in Milano, which had been the norm until 1959 (in the half century between the end of WWI and 1959 only three Giros did not start AND end in Milano) but was not the case in 1961 (and would not be again, with very few exceptions). 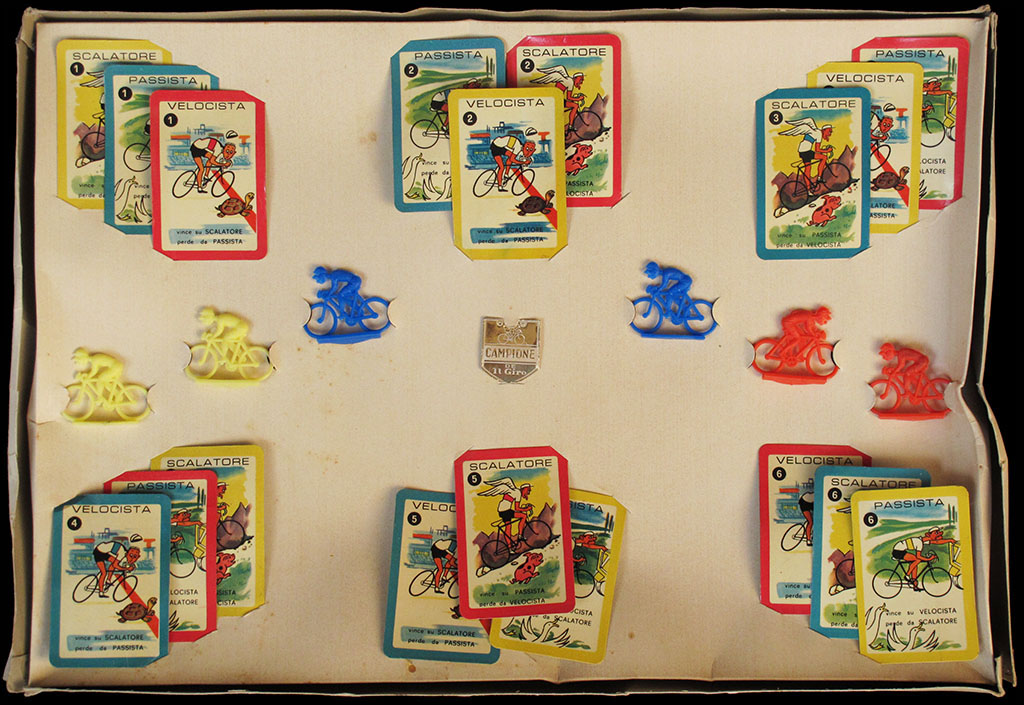 By looking at the contents of the box one cannot see anything too unusual. The riders are quite big (48 mm), but so is the board. One could notice there are no dice and that there are eighteen cards instead. One might even think this could be an interesting game of no chance.

The mechanics of the game are the following. Each players receives a set of three cards (one of each type, same number on each card) which he will keep throughout the game. The first player plays against the player on his left. Each player shows a card and the winner moves his rider(s) 5 fields while the loser moves only two fields. Then the second played plays against the player on his left, and so on. The game turns go round the table as each player plays Rock Paper Scissors (or I should say "Passista Velocista Scalatore") against his neighbours, and only against his neighbours. In a game of more than three players you never play against the players at the other end of the table.

Furthermore, at the beginning of the game players themselves are designed to be either Passista, Velocista, or Scalatore (according to the number on his cards). This does not help to win duels against their neighbours, but gives extra movement on favourable terrains if they win these duels.

On the other hand, the colours on the cards do not have an influence on the game, in spite of being mentioned in the rules. The colours of the riders do not matter either, in spite of matching the colours in the cards. As I see it, there is room for more rules. I have the (weird) impression that the game mechanics might have been "softened" somewhere in the game's development for the sake of playability or sheer understandability. 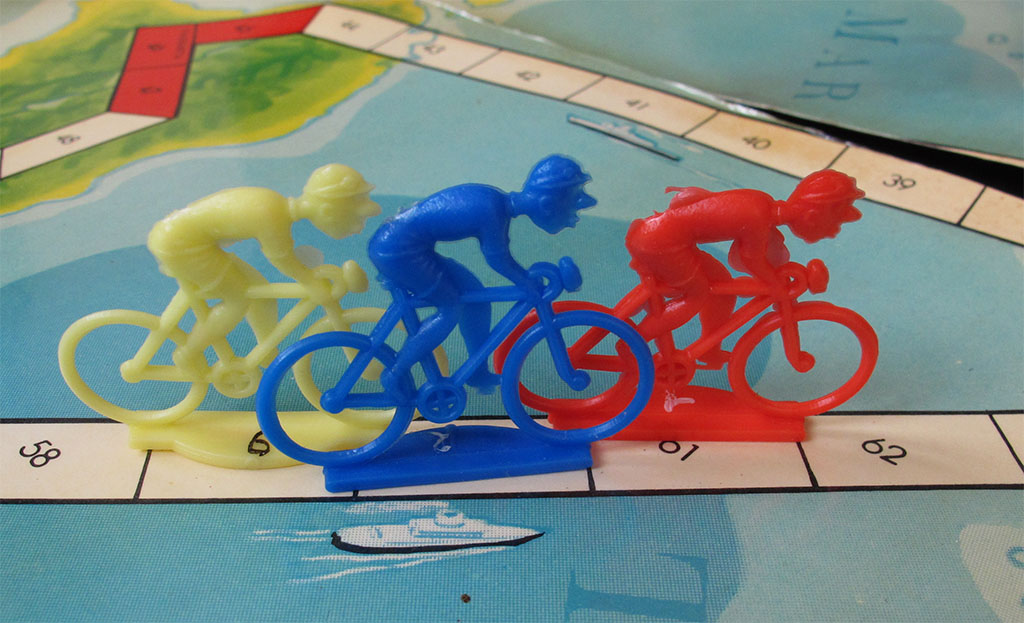 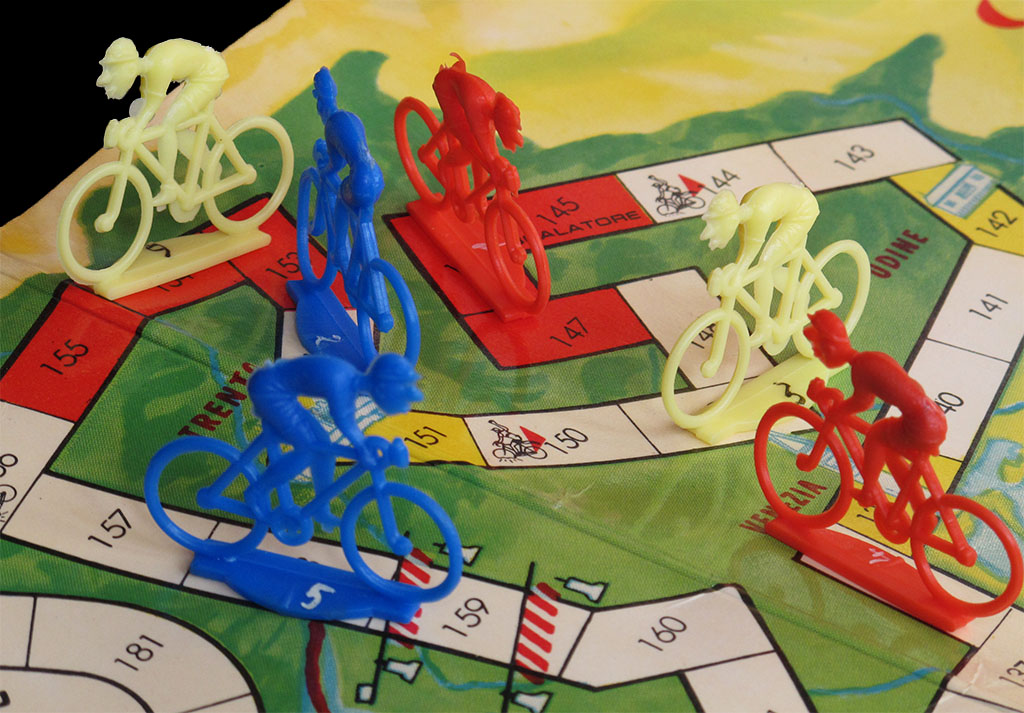 All this, of course, causes the riders to be less stable than they could have been (half as stable, probably). To add insult to injury, the board is made of a thin laminated cardboard prone to bend over time. If you look at the picture of the game box (above, first picture), which is made of the same type of cardboard, you will see how bat it can get. In its present state the game is absolutely unplayable with its original riders. In fact I had a great difficulty even to keep the standing for the pictures. 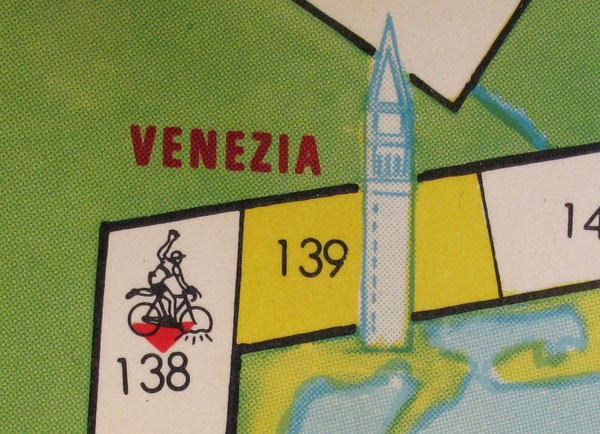 Of course, we also find in this game the usual race incidents, which in this case are "foratura" (puncture), "riposo" (rest)  and "passaggio a livello" (level crossing). Now that I think about it, the image above could have been titled "Puncture near Venice" (after Mann or Visconti. Not this Visconti, of course) 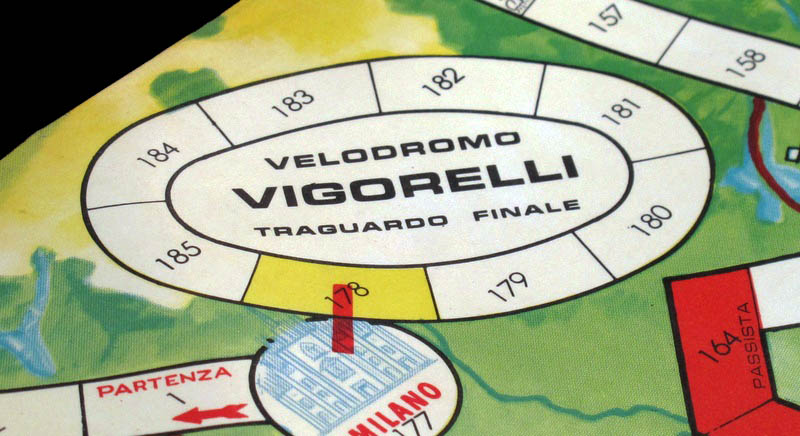 The Giro ends on the Vigorelli track, of course... 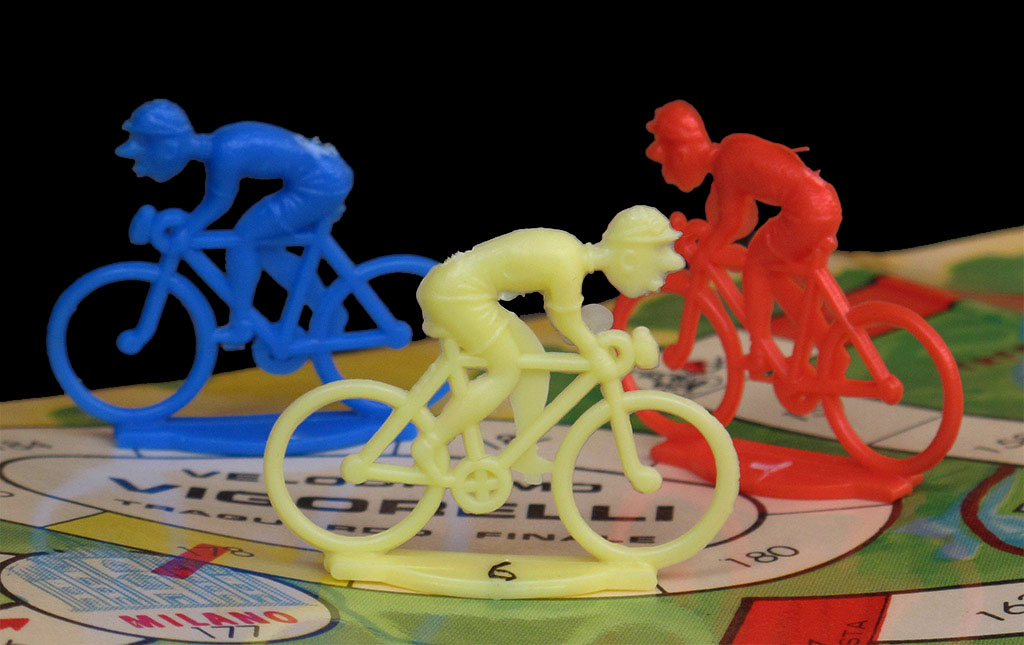 ...however, the problem of space for the oversized riders gets dramatic when they reach it. That's crowded! 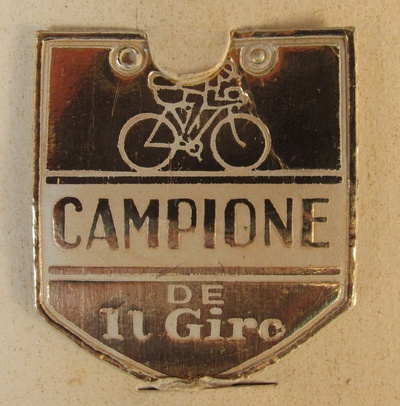 The game includes a price for the winner which, the rules state, he will keep until the game is played again. 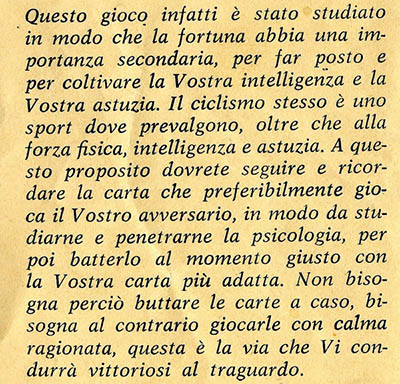 All of the above said, I would like to make clear that I love the game Rock Paper Scissors. However, I love it for what it is (a mental game in which players try to gain advantage exploiting the psychological weaknesses of their opponents, as is mentioned in the introduction to this game's rules), but I do not like it so much as part of the rules for moving riders in a cycling game. 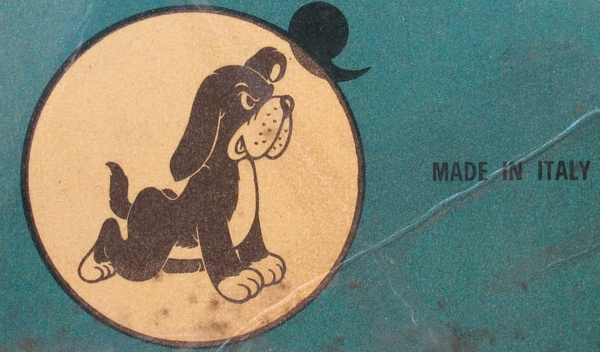 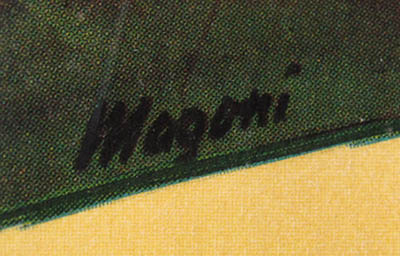 In the end this game reminds me of Il Campionissimo in the sense that they are two roughly contemporary Italian games with mechanics wildly different from usual games. Italian creativity, I guess.