This old Swiss game has proven to be hard to find. It was first mentioned to me almost fifteen years ago by the late Geert Lagrou, who sent me a picture of the game he had found in a book (see below). In these years I have seen the game for sale only a couple of times, until I was lucky enough to stumble on a copy of the game. That was the box you can see on the left of the picture above, and I guess we can call it the poor man's version of the game. And then, just a few months later, I received an email asking if I was interested in buying the box you see on the right, complete with metal riders. Of course I was!

Apart from the color difference between the two boxes, the box on the left just has the printer logo while the one on the left has also Hoffman's logo on the bottom right corner. 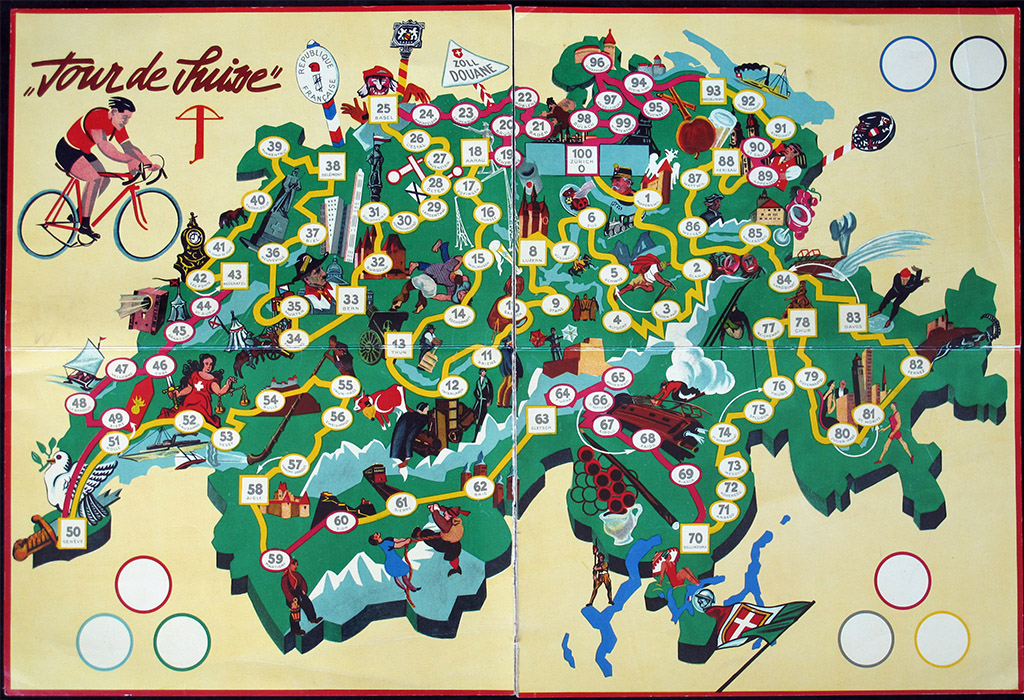 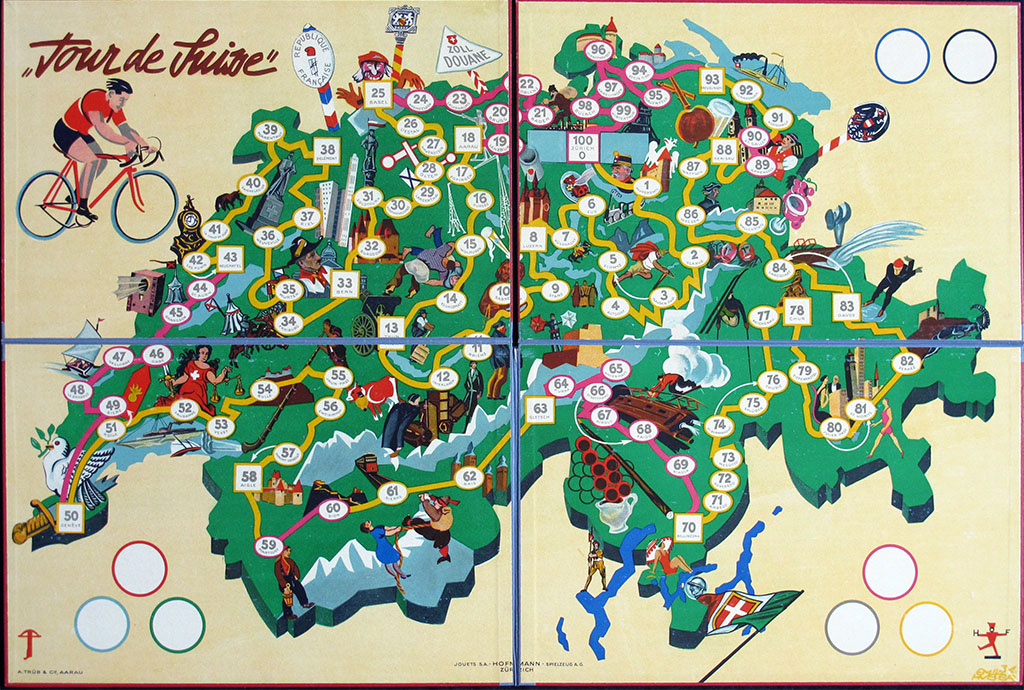 If you compare the boards, the one on the first box (above) is made of light cardboard and does not have any logo on it, while the second board (made of sturdier cardboard) has a number of logos, including the signature of the illustrator. I suppose it is safe to say that one of the games was not published by Hofmann. It might be a later reprint but I am not really be sure. 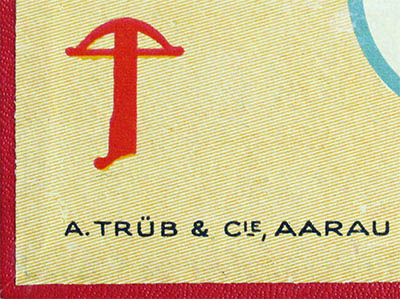 This game was printed by A. Tr³b, from Aarau. 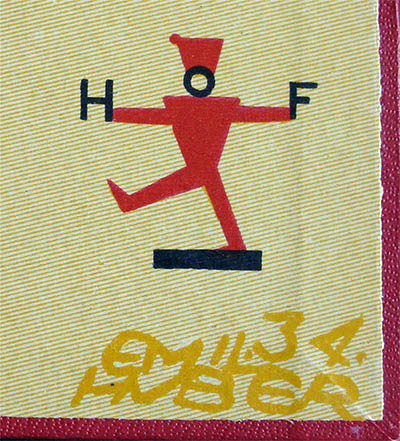 And published by Hofmann, from Zurich 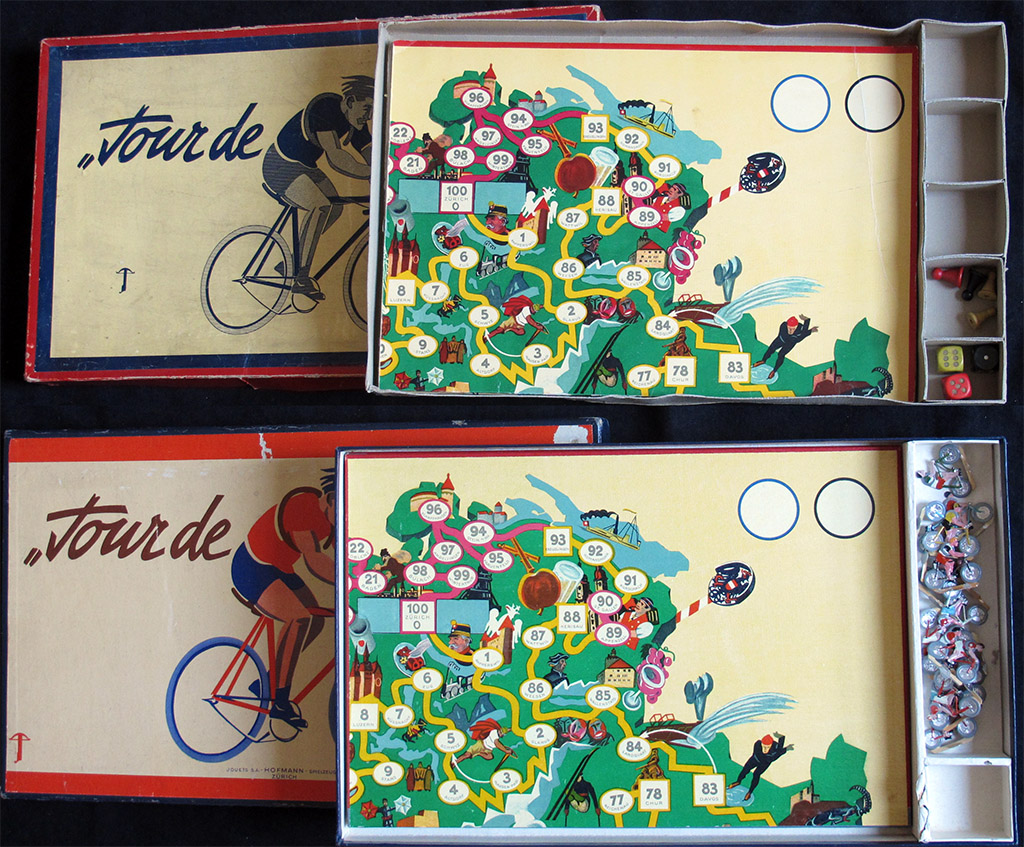 But the most important difference between the two editions is the presence of 16 metal riders on the Hofmann version of the game, while there were only wooden pegs on the other version. (Just three wooden pegs in my game, but obviously the rest are missing).

By the way, the two games I saw for sale on the internet and I did not buy had plastic riders, and they were not the same riders. My guess is that they are replacements, but it is just a guess.

In the Hoffman box there are eight different riders, two copies of each. Half of the riders wear caps, half don't. In the picture above you can see one rider of each kind. If you are going to play a 4-player game with 3 or four riders per team, you will have to decide who matches who. Some cases are quite obvious. In fact three out of fourr matches are quite obvious, so the red and yellow jerseis will have to be in the same team. 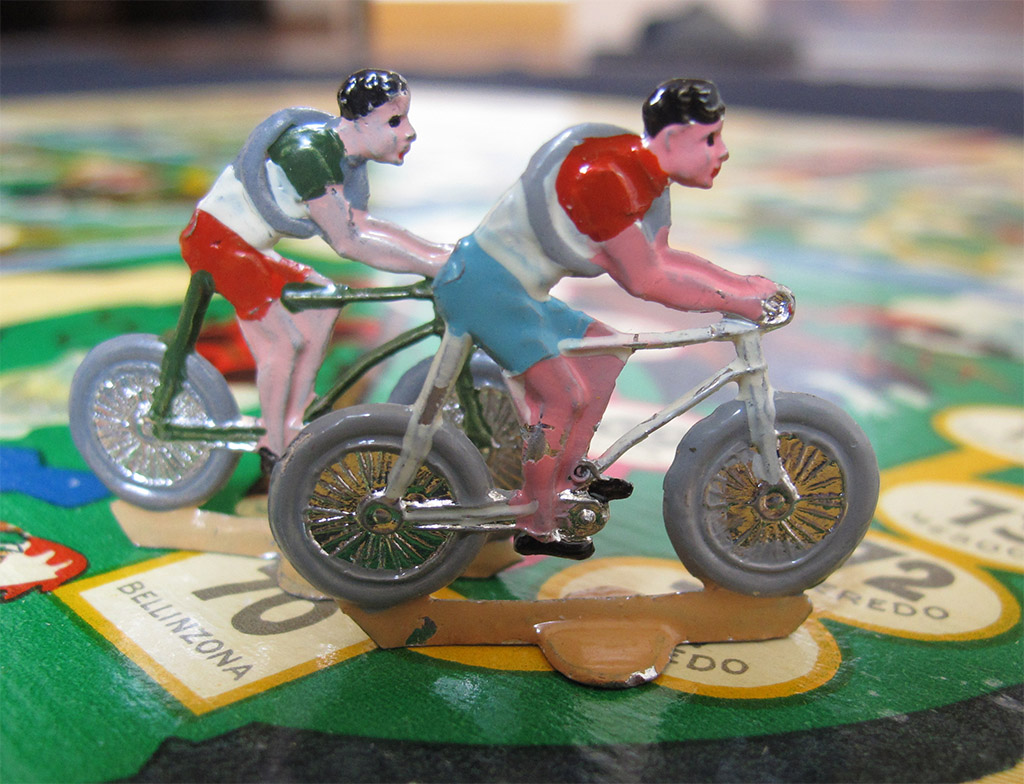 No, these riders are not in the same team 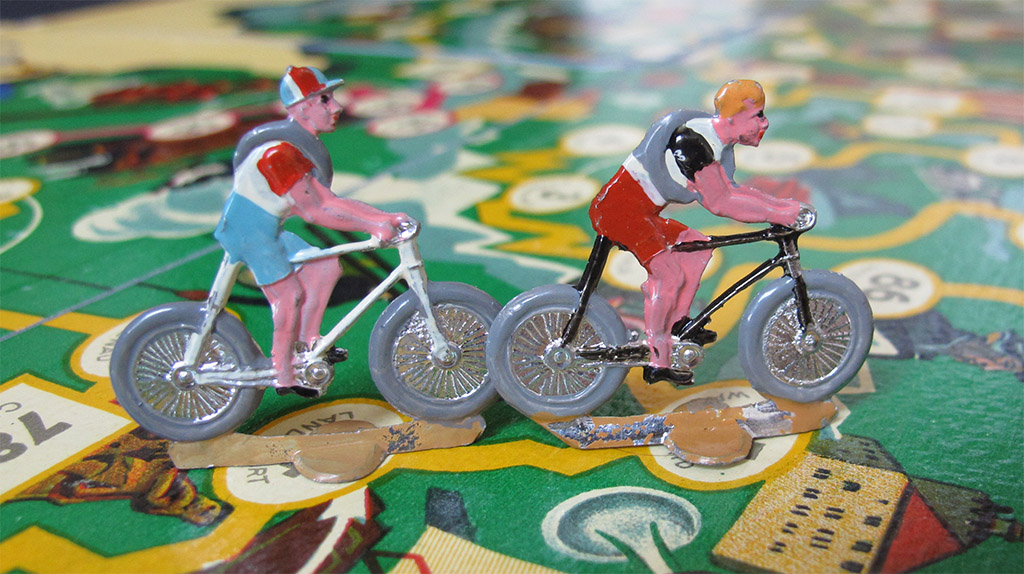 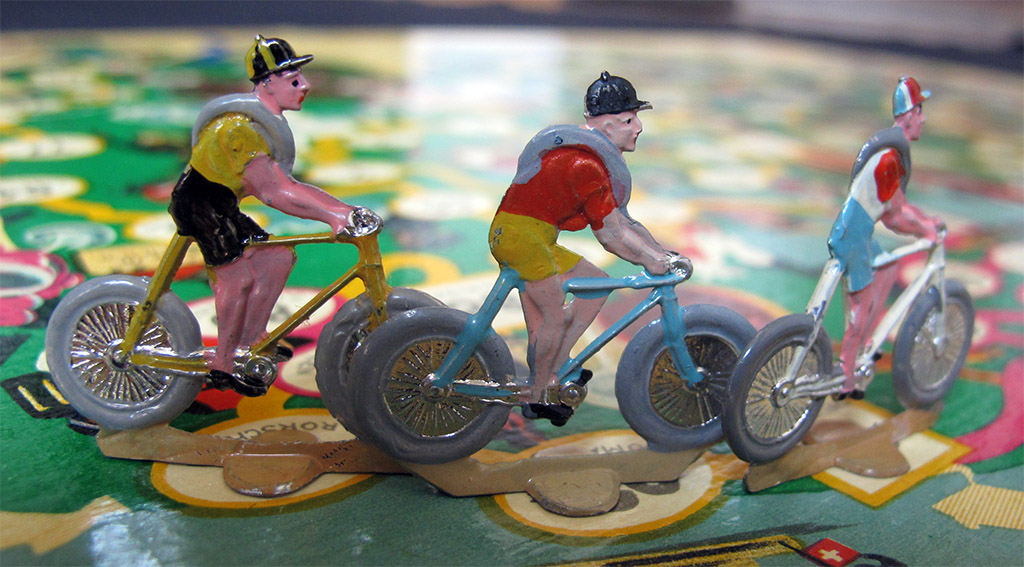 Well, after all it is up to you to decide. 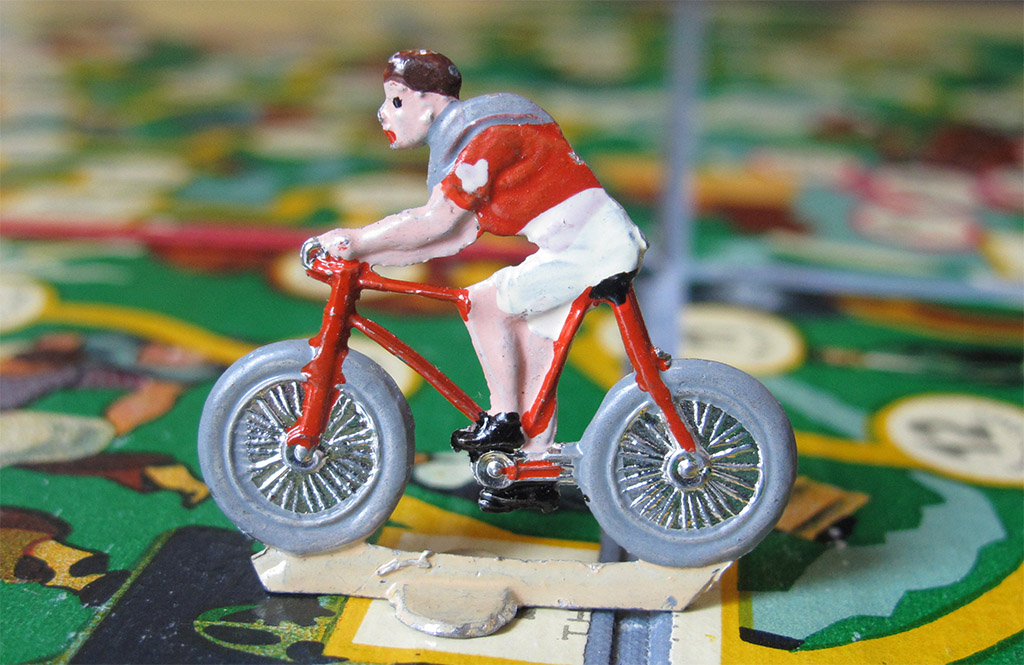 I am afraid I forgot to take a decent picture of the swiss rider with a cap :-( 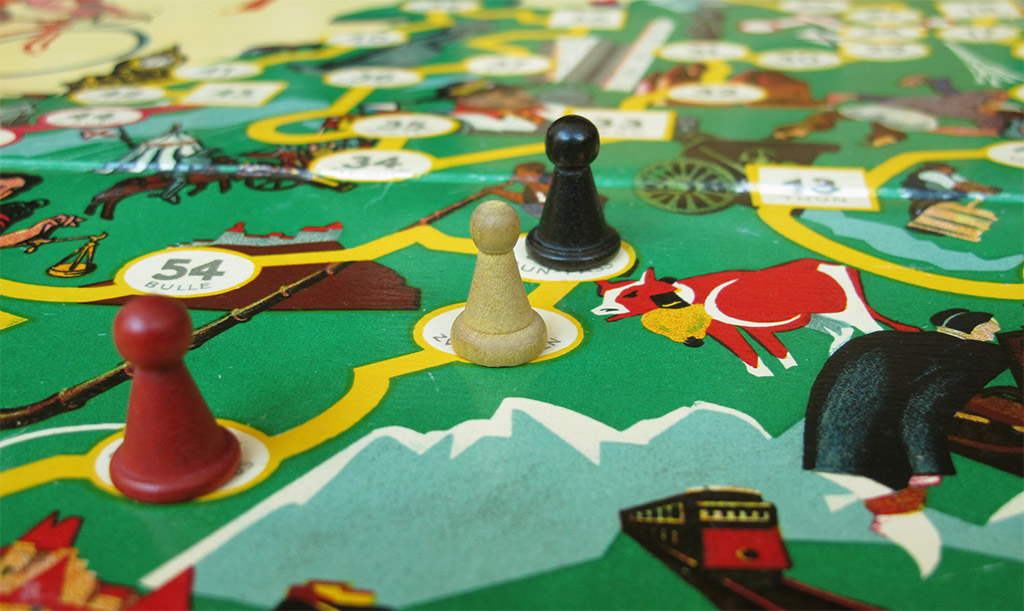 With my incomplete copy of the "poor man's versio" of the game, only three can play (I mean I just have three counters). But remark that the wooden pegs fit better in the board fields. 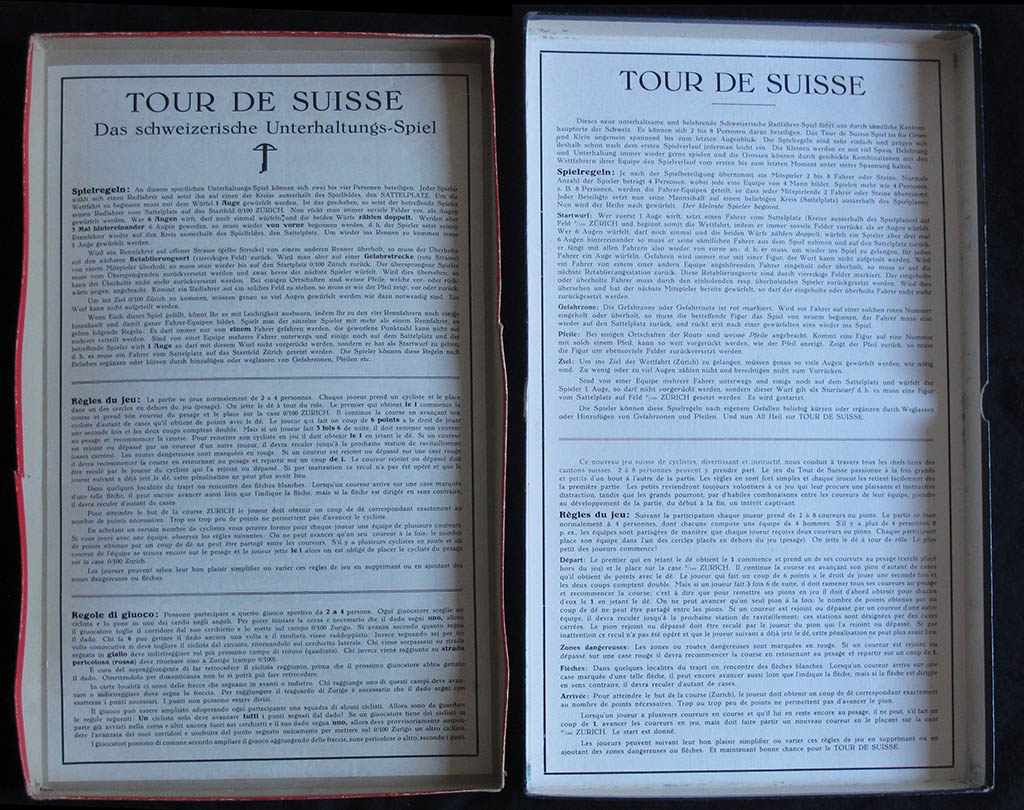 The  rules are pasted to the back of the box lid in both cases. What is quite surprising is that they are not the same rules (although they are not too different, of course). The first difference is that the Hofmann version only has rules in German and French, while the other box has Italian rules too. In my opinion this strengthens the thesis that this version might be a reprint.

Of course, adding a third language in the same space and with the same typography forces to make changes in the rules. Though probably the German rules are the original (since publisher, printer and even artist were based in the German-speaking part of Switzerland), I will compare the French rules since my French is better than my German. 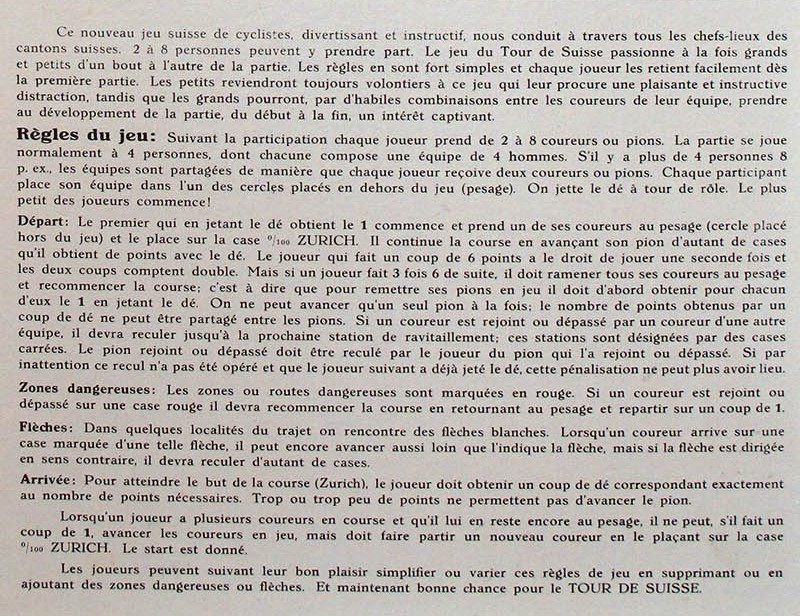 The main difference is that according to the Hoffman rules (the longer ones, above) the game is played by two to eight players, though it is generally played by four players who menage teams of four riders. On the other hand the other rules (shorter, below) say that the game is generally played by two to four people who take one rider each.  (Maybe there is only one wooden peg missing in my game after all).

However, the cheaper game rules say that you can buy extra cyclists to form teams. It does not mention any limit to the number of riders in the teams.

The rest of the rules are basically the same in the two games. With one rider per team it is a simple roll-and-move game. With larger teams at least you have the choice of which rider you want to move, which gives the game a (small) tactical edge. Nevertheless I will keep this game in the game-of-goose section of the site.

By the way, the last sentence in the rules (both versions) states that you are allowed to change the rules if feel like it. 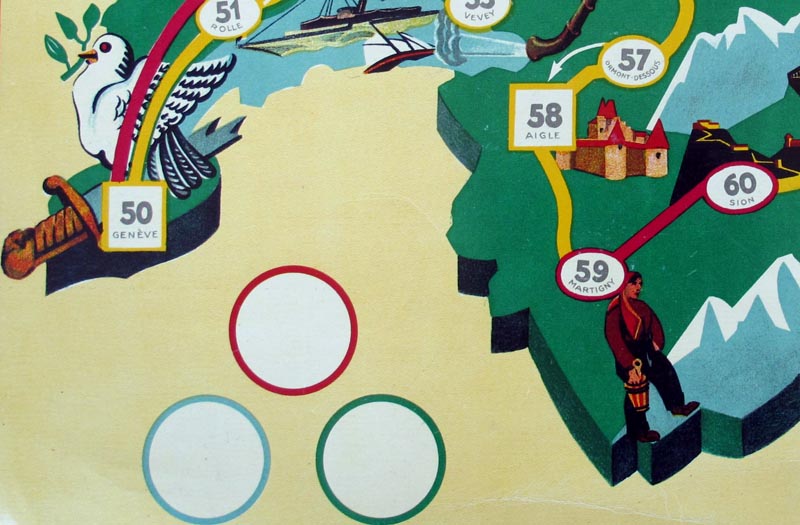 These circles are supposed to be the "weighting area" for the teams.
There are eight circles, since the game can be played by up to eight teams (in the Hoffman rules: my reprint theory strengthed once again). 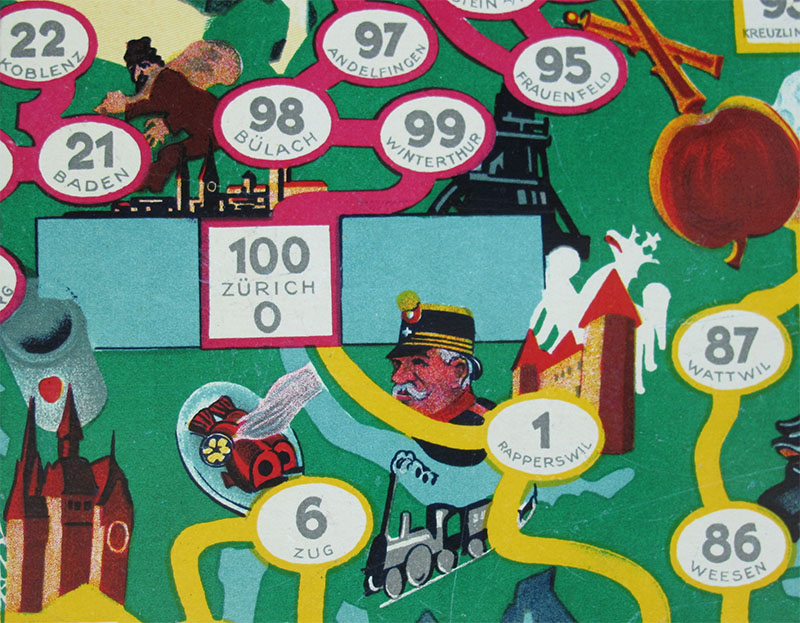 The race starts and ends in Zurich. 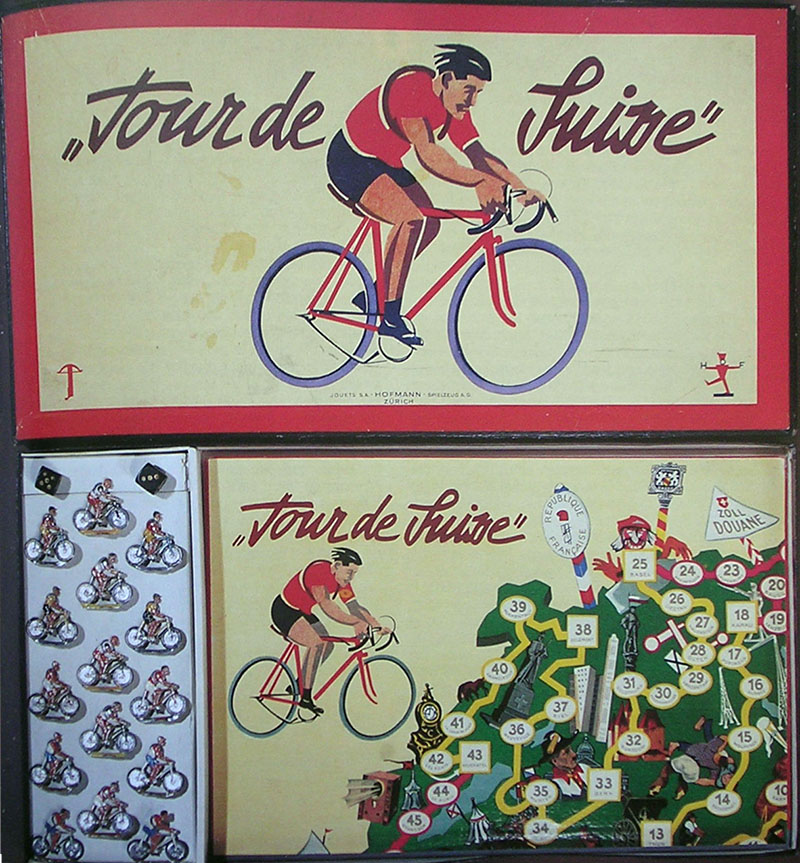 The picture above was sent to me many years ago by the late Geert Lagrou. The picture was scanned from a book, but unfortunately Geert did not send me further references to identify the book. As you can see, the game displayed in it has only 15 metal riders, but they are the same riders that I have, which proves that these belong to the game and are n ot replacements. 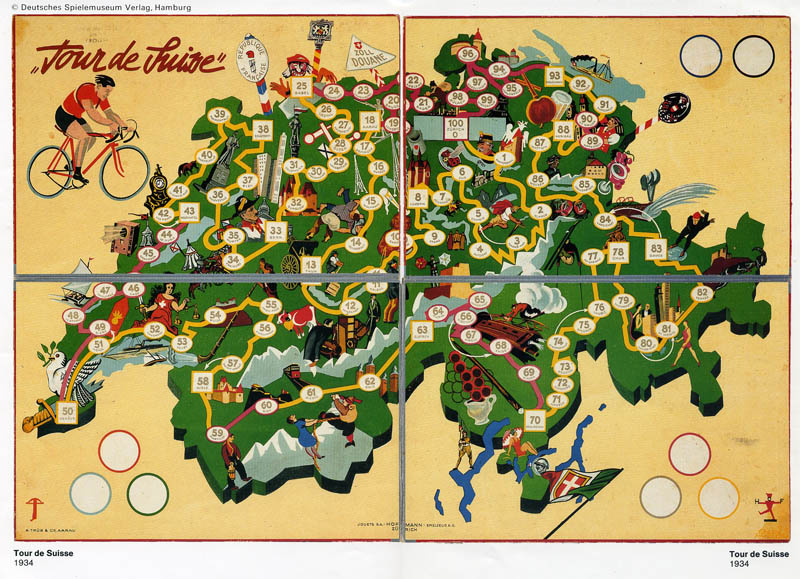 The Deutches Spielemuseum published (years ago, when the museum was still in Hamburg) a calendar featuring this game.

Thanks to Raisubidesu for his help to find and buy the first version I had of this game.
Thanks to Ralph Beckman for finding, keeping for many years,and then offering to sell to me the deluxe version of the game