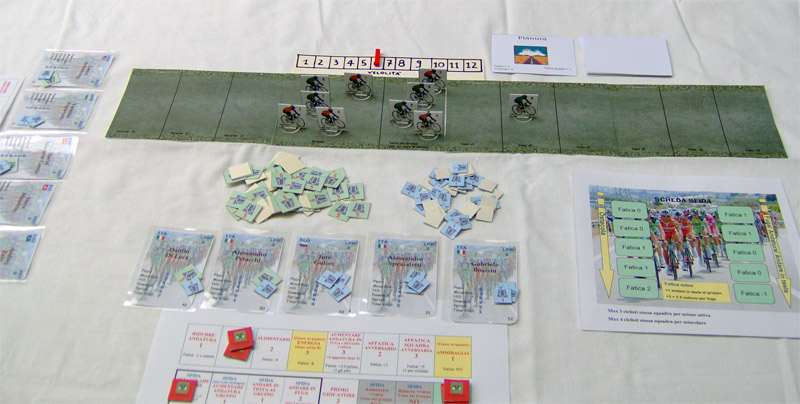 Here is a new print and play game, which  I haven't played yet, but which looks VERY interesting. (By the way, I haven't even taken the pictures myself. I have downloaded a couple that were on BoardGameGeek instead).

What makes it so exciting is that the rules are quite different from the other games, and are vaguely similar to what I have in mind when I talk about the "perfect" cycling game. Of course, I don't really know if the game really works  and I will not know until I have time to play it.

On the negative side: The rules are quite long to read and not always crystal clear, but this is not a major drawback (hint: keep the "activity display" at hand while you read them and they will be much clearer). The game is supposed to be for kids aged 8 and up (I would rather say 12 minimum!) and last 60 minutes (maybe, but only if you know the rules well... It took me more than 60 minutes to read them).

All this is not so important. I assume the game is in a development stage, and it only can improve. (In 2010 there has been a revision of the rules. Now you can download version 2.0.)

On the positive side: Many things. One of the most important: there is no randomness involved in the game (no dice or card drawing), which will appeal to hardcore gamers. Another unusual rule: no individual movement of the riders along the track, so you can play with a big peloton without wasting precious time moving riders. I always said

Enough said so far:  the game looks really interesting, and it is free to download, so there is no excuse. DO NOT MISS IT! 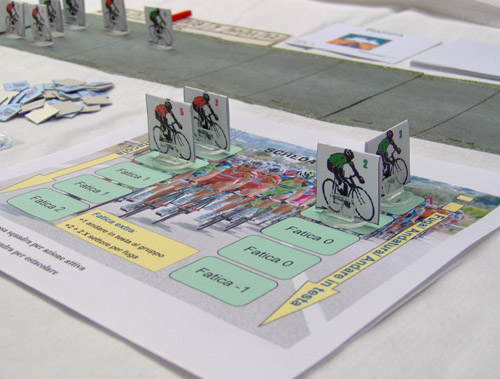 In 2010 Luke Morris has made a new game Tour Cycle Free, which bears some formal resemblances with 2Ruote. The most remarkable is that both games use relative movement (a concept I explain in my text "New Directions In Cycling Board Games"). However, they are not the only cycling games to use it. Bikbik, for instance, is an unfinished gaime by Jaime Munárriz and Esther Berdión that has been in the unpublished games section of this site for years. My new game TakTik Tour (still in the test phase) also uses relative movement, and I expect to see more games that use it in the next few years.