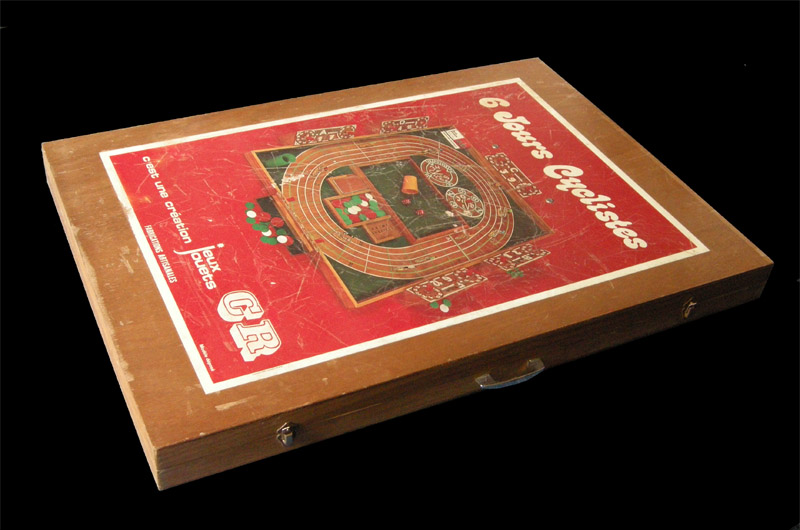 This game (from the collection of François Cardinet) is one of the biggest (and no doubt the heaviest) cycling games ever made. The box (and thus the track) measures 78 x 55 cm. It is also one of the very few that not only call them "6-day race game" but that do try to actually represent such a race.

It is a "push-your-luck" dice game, which is quite unusual in cycling games. Riders throw two dice as many times as they want provided both dice do not add seven (puncture, the rider stays, therefore losing all the previously thrown numbers) or two (double ace, fault: the rider not only stays, but pays a 50 franc fine).

All other doubles are worth the double of their value (for instance, double six advances 24 squares).

At the beginning of the game each player receives 2600 francs, but must pay immediately 1000 francs to the pot. The riders are placed in line by number order (team 1-7 being privileged) and the race can start. 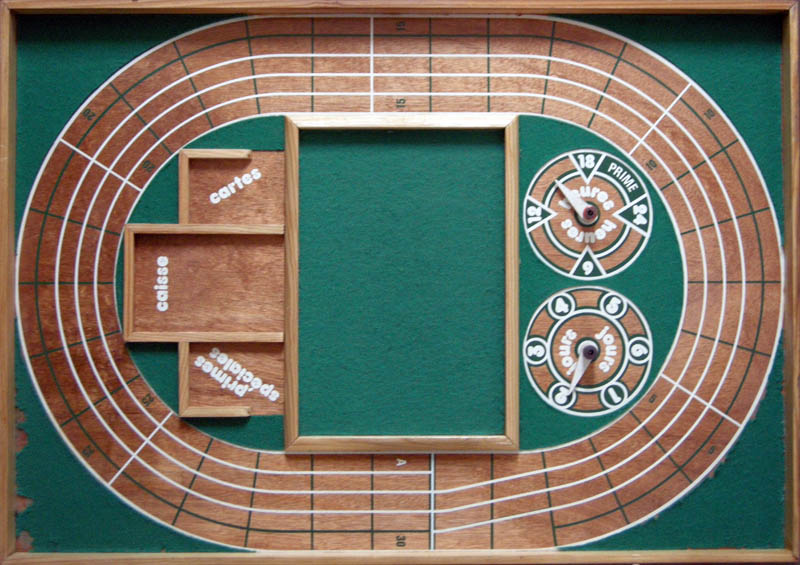 The order of the movement is according to the rider number (rider 1 moves first, rider 12 moves last). On tThe board ther is a clock for the hours (6 hour terms) and another for the days. Every time that a game turn is completed (all 12 riders having played), the clocks advance 6 hours.

Every time that a rider crosses the finishing line, his lap counter advances by one and he receives a PRIME card. These cards bear two messages one refering to game money ( "evey player gives you 40 francs", "evey player pays 100 francs to the leading team", "you pay 100 francs to the last leam", etc...), and one refering to bonus laps ("you win one extra lap bonus; if your team is last, the bonus is of two laps", "the last team wins two extra laps", etc...). 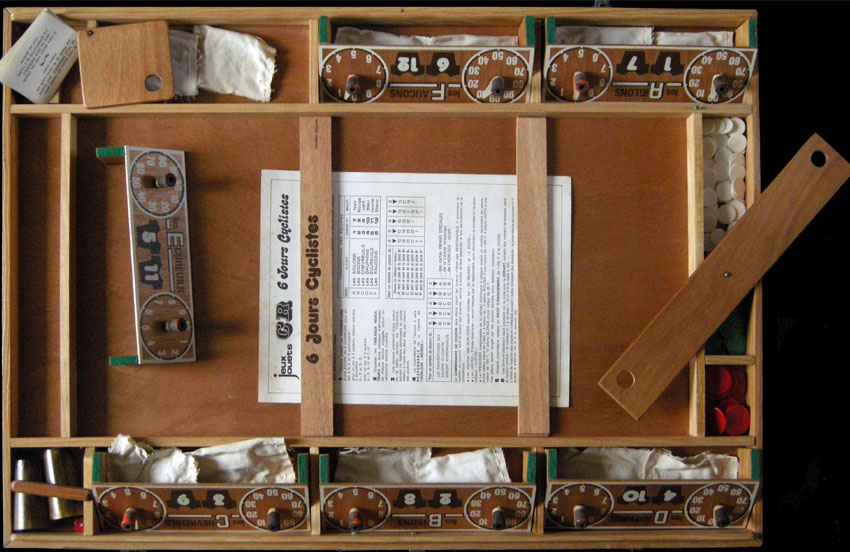 With twelve riders on the track, and some of them not moving, there is a strong chance that some riders are blocked. The ruiles mention the possibility of calculating your dice throws in order to block other riders (but they do not mention if there is the possibility of not advancing the full value of the dice).

Finally, the game turn representing 18 hours (which is the hour of maximum attendance at a 6-day race, of course), there is a daily bonus of ten units (sic -probably means francs-) payed by each player to the winner of this particular 4-lap race. For this race, part of the rules are suspended. All riders are placed on the outer (green) lane of the track. (If two or more riders are tied, the lowest number gets the good place, the others are placed behind). The riders race following the spiral line (see board) and, if they overtake a rider, they must be able to return to their lane. Laps are still counted, but time is suspended (no clock advancement at each game turn) and there are no PRIME cards at the end of laps. When a rider crosses the finiing line aftwer four laps, this race is ended, the clock advances to six hours (thus changing the day) and the race resumes from the positions the riders are.

There is as well an extra lap awarded to the leading team, called "bonification de tour journaliere". 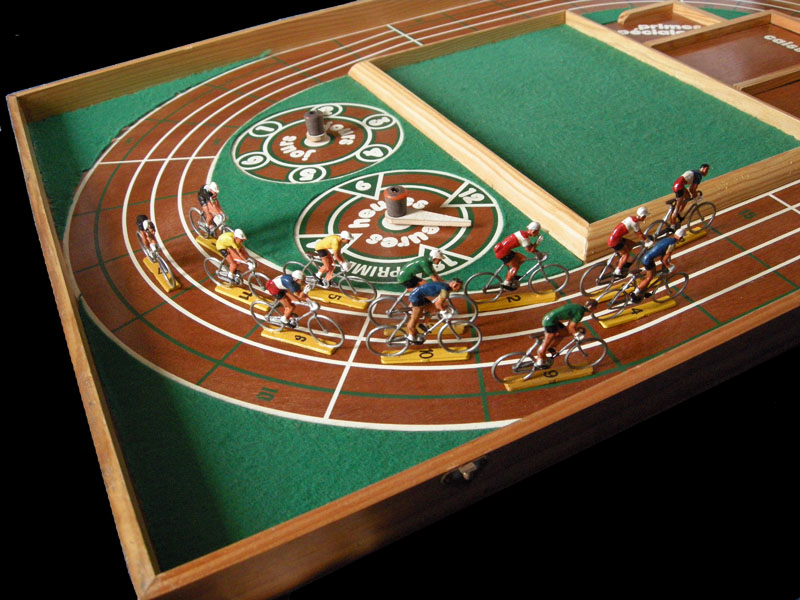 At the end of the six days, the race ends and the pot is given to the player with more laps in his counter. In case of a tie, it is not the most advanced rider who decides, but the pot is shared between the tied players.

As you can see by this final rule, the whole point of the game is playing with real money.

Still, it is one of my favourites. Since it is so hard to find (and impossible to send by mail), I may have to build one for myself someday. 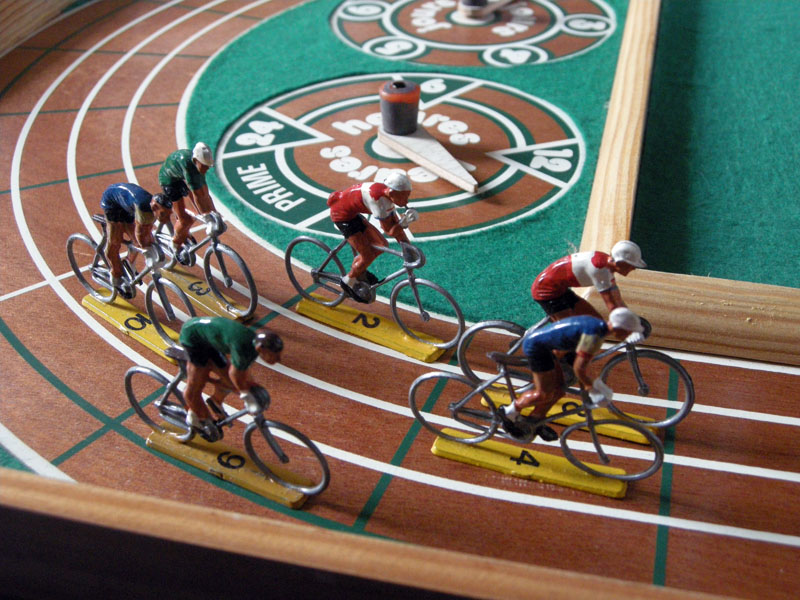 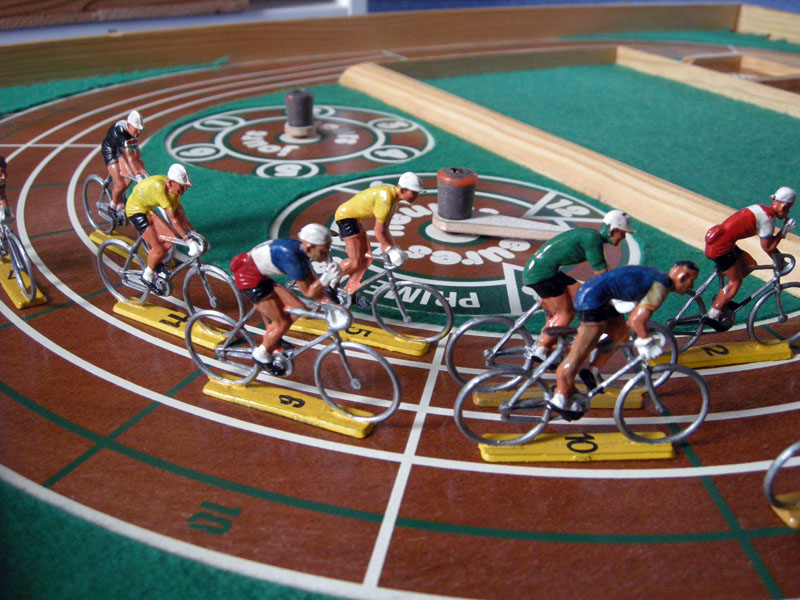 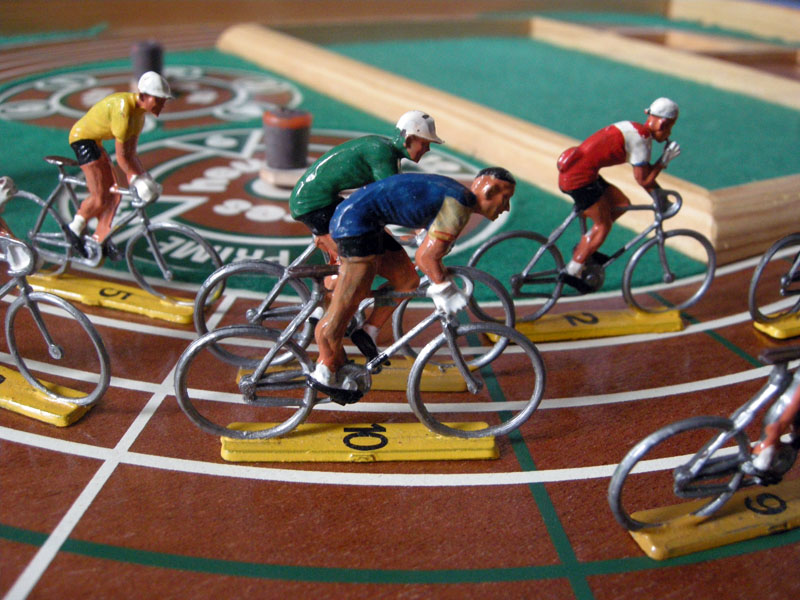 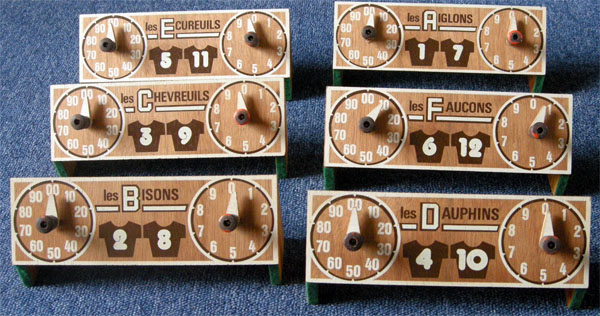