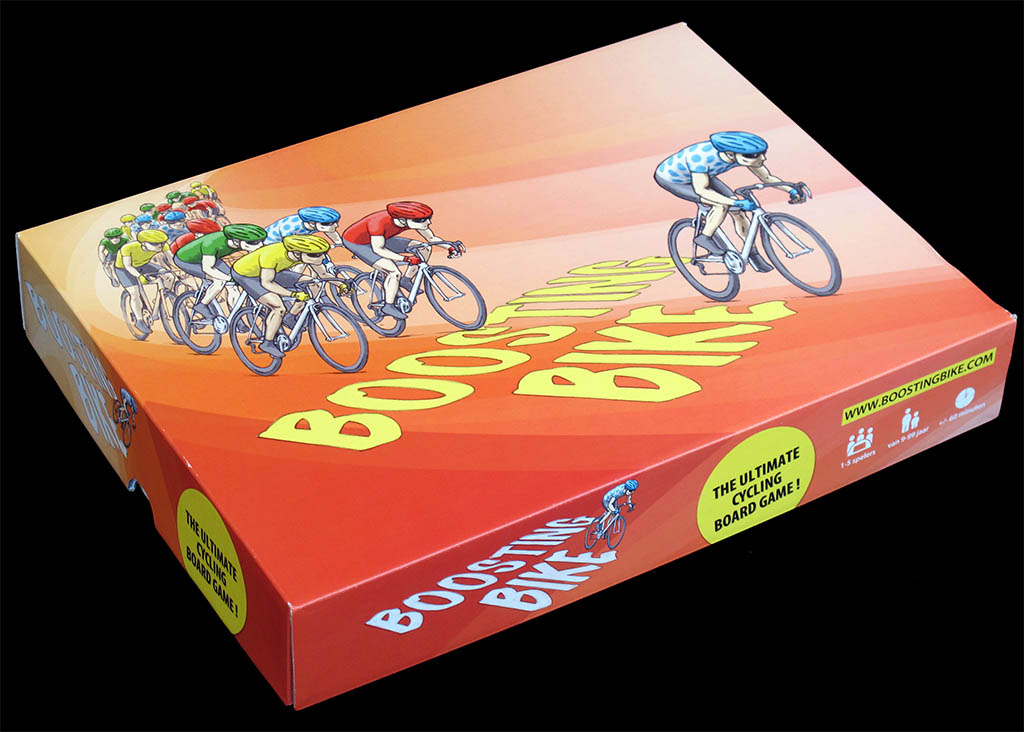 Boosting Bike is a game invented, developed and produced by Jos Noben, from Antwerp. Jos has spent many hours to get a peloton of cyclists moving in a realistic way around the board, to have a "peloton feel" in the way riders move. And I think he has succeeded pretty well. Also, as a result of his efforts, he has developed some unusual game mechanics. In these days when new games that are too similar to one another, it is a blow of fresh air to find a game that explores different paths.

Of course, such an approach has its drawbacks. The number of riders in the race is fixed to sixteen (four teams of four riders). If there are less than four players, some of them have to take more than one team. The rules say that the game is for 1 to 5 players. Of course, in the case of playing solo, the player takes all four teams. This lets clear that, although this not just a roll-and-move game and there are a fair number of decisions to be taken at each turn, there is not a complex strategy involved in the game (otherwise it would be impossible to play alone).

On the other hand, despite what the rules say, I do not think five can play the game. The fifth player is supposed to be a judge, to move the riders and so on, but he does not really take part in the game. As far as I am concerned, I think the best number of players is four.

There are two versions of this game. The one we see here is the bigger one, with a board that measures 120 x 46 cms. You need a big table to play it! In case you do not have such a table, you might find the version with the smaller board (60 x 46 cms) more suitable for your needs.

The game uses special dice (drilled one by one by Jos Noben himself). The red dots represent half a point. As you can see the values on the dice are 3, 3, 2 1/2, 2 1 1/2, and 1. There are tho different 3's (painted/unpainted) because there is a rule  about throwing the same number with both dice, and it just applies to either two painted threes aor two unpainted threes , but not to one of each. 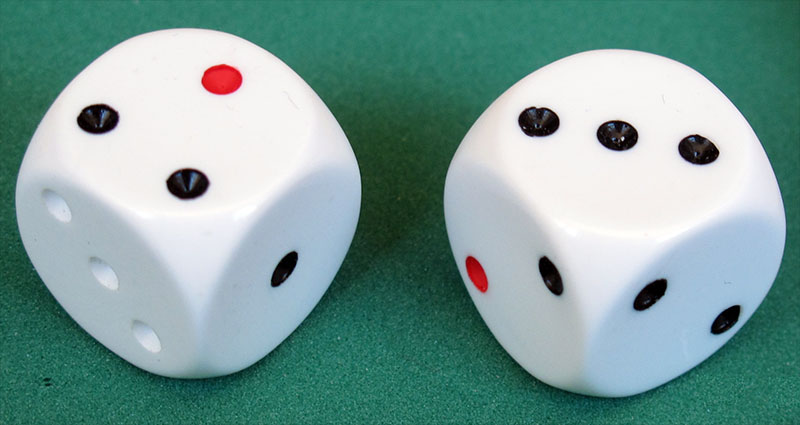 The riders are placed on the white lines and on the black dots of the board. The half-point is a diagonal move (line to dot, or dot to line) while the full point is either a front or diagonal move.

Another original rule is the turn order. It is not determined by the first rider on the race  nor by tghe order of the players round the board (which are the two usual options in cycling games), but by a colour table on the board upon whic a white counter is placed to remind where we are in the turn. The turn itself is divided in eight parts. The two leading riders of each teams are moved in the first half of the turn and two trailing riders of the teams are moved in the second half of the turn, but in a different order. The order of the following turns is also different.

At the end of each turn, when the sixteen priders have moved, there is a phase called "Boosting" in which some riders benefit from an extra advance. Riders who are on a black dot just (diagonally) behind another rider (who is on a white line) move one dot ahead. Shoud the rider, by this movement, find himself again diahgonally behind another rider, he continues advancing. This can be considered an "aspiration rule". If the rider behind whih he finds himself, is of the same team, thden he rider advances two more dots. This part, more than aspiration, I see as one rider pushing his teammate.

I quite like this mechanism, since it makes the peloton move harmoniously, but the result is that the black-dotted lanes on the board are faster than the white-lined, which is quite unrealistic. 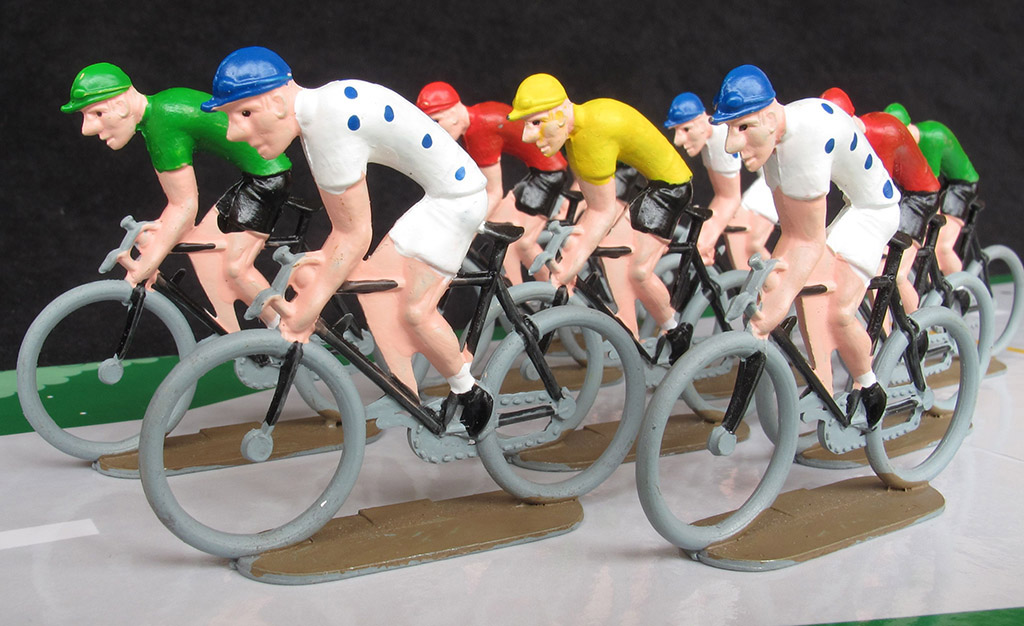 By the way, in the advanced rules these two phases are played in real time every time a rider moves, instead of at the end of the turn. THis makes a much livelier game in which the player who leaves the table for a minute might lose an opportunity to catch up with the pack. 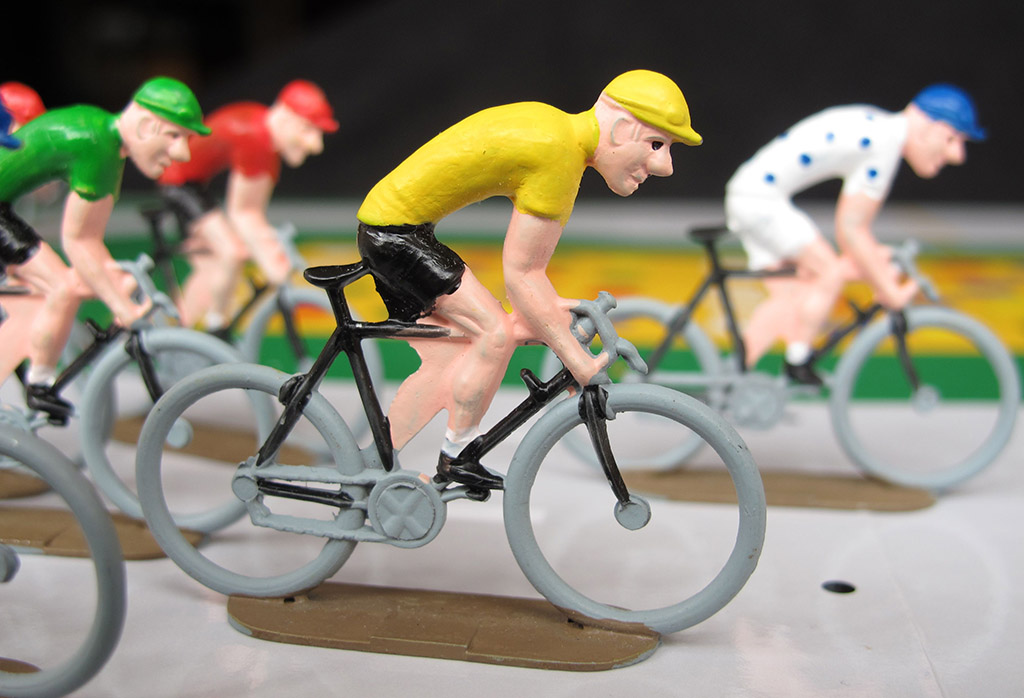 All in all, this game is made of a mix of usual/unusual (even realistic/unrealistic) rules. As a last example (I am not going to disclose ALL the rules) the winner of the game, which is the team with most points. The first rider in the race gets 100 points, the second gets, 50, the third gets 25, and the rest of the riders get points (in descending numbers) until the fifteeth, who just gets 2. So far, so good. The  "unrealistic" rule is that the last rider gets minus 20 points. While this does not happen in real cycling, it works well for the game since it forces all teams to care for their last rider and not to spend all the good throws in their best rider. 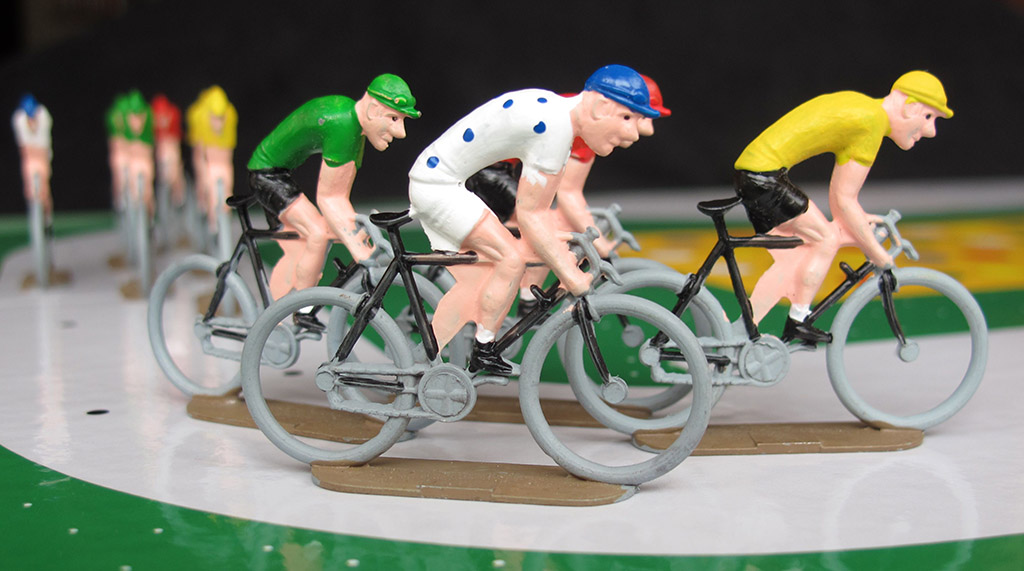 There are three different kinds of riders you can buy  for this game (check the game's website, link below). The basic riders are the small monochrome ones which you find in so many games (including my own Maillot Arc-En-Ciel). These are probably the best for the small board but the "peloton feel" mentioned above is somewhat lost with such small riders on the big board. Myself, I tried the metal Roger's the first time I played the game, and I do not want anything else, despite they are the most expensive. (As an advantage, they are less expensive than if you were to buy them separately). 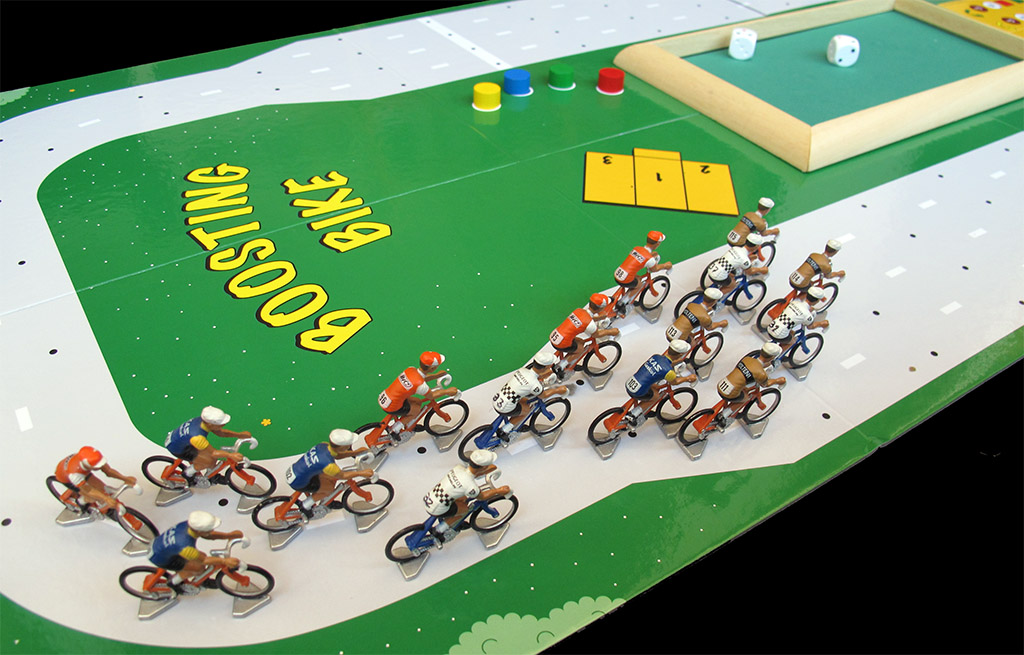 Of course, you can use your own riders, if you have some from other games. All you need are sixteen riders in four different colours, ideally yellow, red, green and blue. As you can see, 1/43 Norevs are perfect, even if the colors do not match. 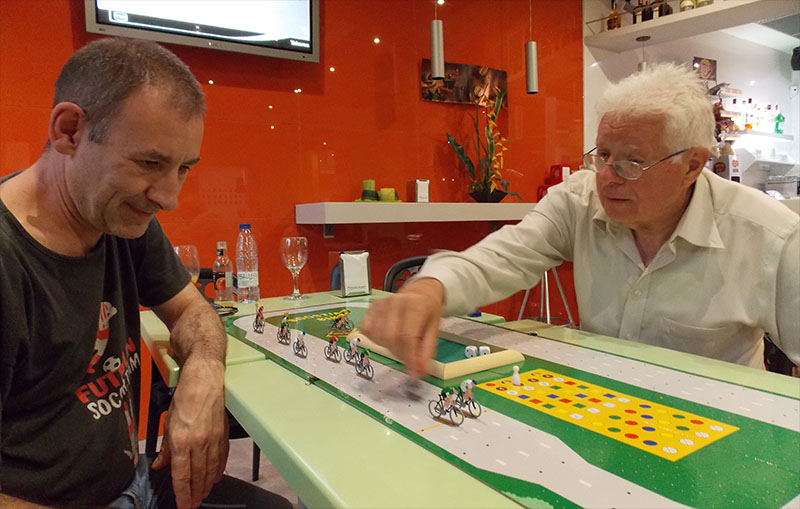 Jos introducing the game to Anki in a bar in Ibi, of all places.

A nice thing about this project is the so-to-say after sales service. Jos keeps imagining race situations and rules' clarifications which he sends to customers (at least, he sends them to me). Recently he has released a video that you can watch on his site or on youtube.