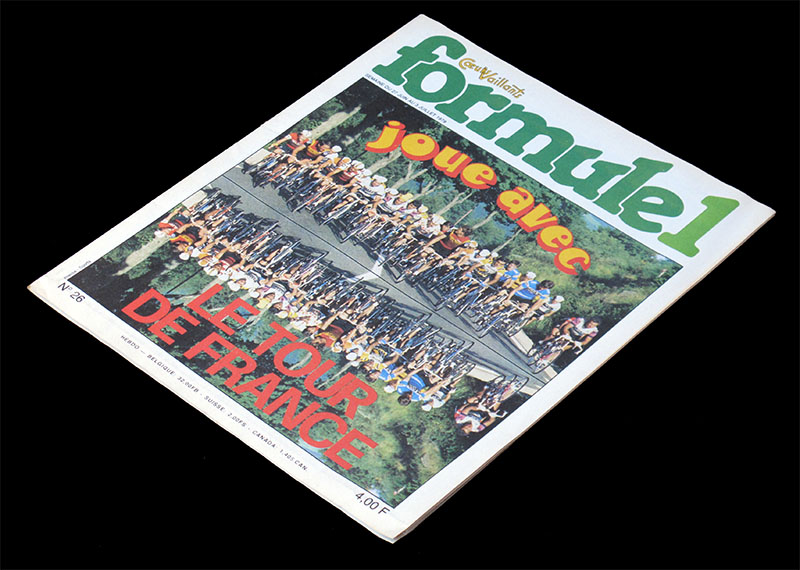 Coeurs Vaillants, known later as J2 Jeunes and still later as Formule1, was (I quote from the Wikipedia)  "a Catholic French language weekly newspaper for French children. Founded in 1929 by l'Union des Ouvres Catholiques de France , the weekly newspaper targeted readers aged 11 to 14 to become part of l'Action Catholique des Enfants. The newspaper is notable for introducing The Adventures of Tintin to France".

The magazine (as "Coeurs Vaillants") had already included a cycling game in 1950 and almost 30 years later they included this other game, as "Coeurs Vaillants - Formule1", on their issue n°26, june 27th to july 3rd, 1979. In this case the game is a 4-fold poster stapled to the magazine. It measures 54 x 46 cms and it features three different simple games for the different tour de France stages, indicated by the colours in the "Classement" table. 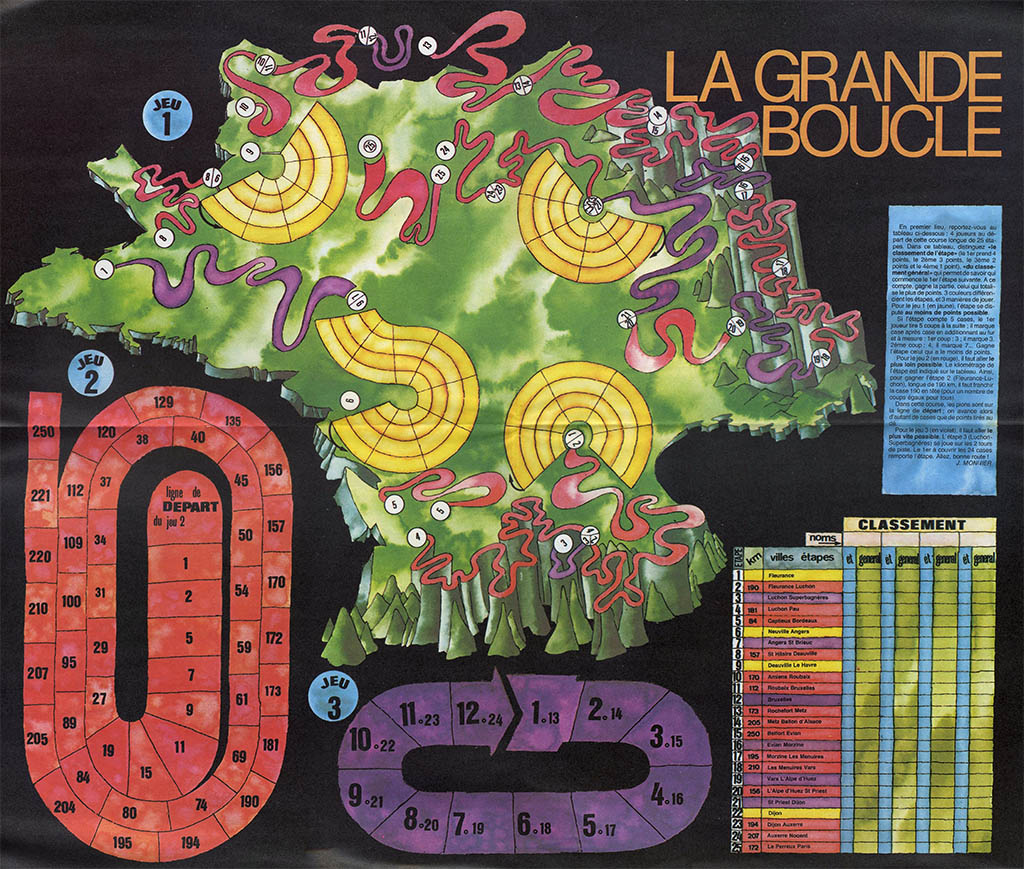 The first game applies to the yellow stages. Each player throws the die 5 times (this is why the stage has 5 squares, but in this case the board -including the lanes in it- is quite useless) and adds up the values thrown. The winner is the player with the lowest sum. 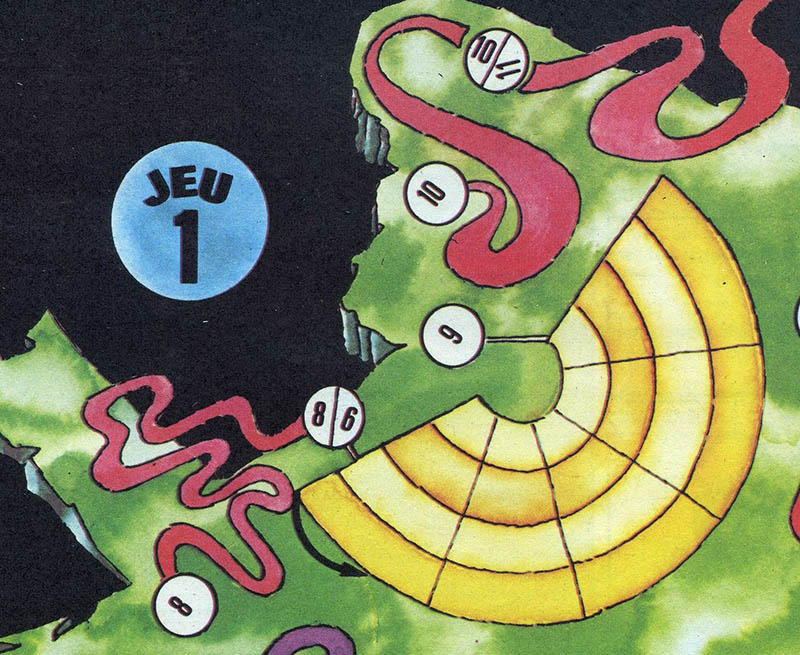 The second game is for the red stages. It is the usual "further past the post" race game in a race, though the wording of the rules is quite ambiguous. The length of each stage is marked on the "classement" table. By the way, though the stages are those of the 1979 Tour de France, their length is respected (approximatively) for some stages and simply ignored in others. 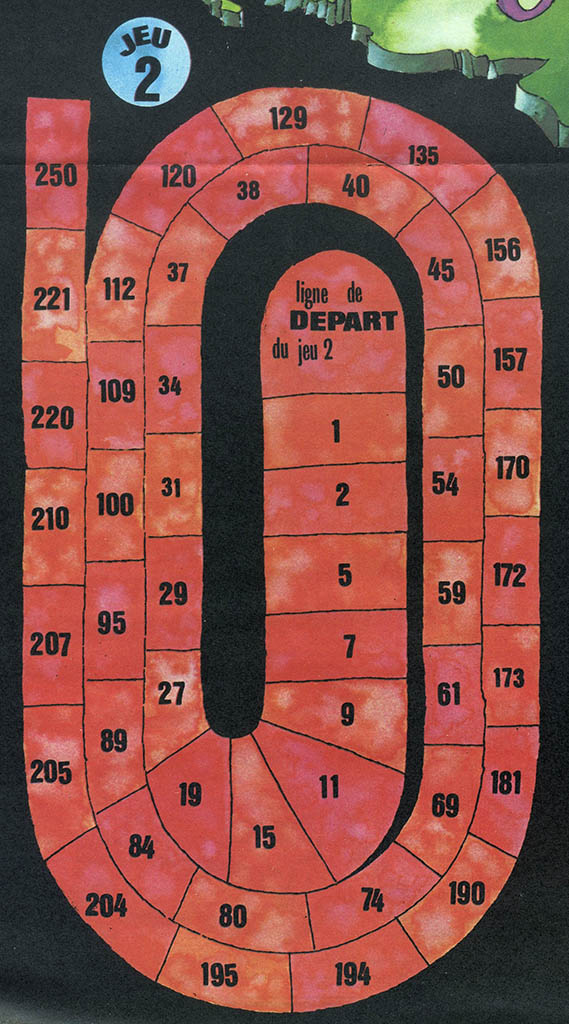 The third game applies to the purple stages. Here the rules are even more ambiguous. They just say that the third stage is two laps long. They do not mention the other purple stages (I would assume they all are 3 laps long), and they just specify that the goal of the game is to be "as fast as possible", as opposed to the previous game where the goal was to go "as far as possible". Of course, this does would not not make any difference with the previous game, apart from the length of the stages.

However, the rules make a difference between the stage classification (4 points to the winner, then 3, 2 and 1) and the overall classification (adding all the points of the different stages), which determines who starts first to next stage (by the way, there is no mention to what would happen in case of a tie). With this in mind, I assume that not all the players have the same number of turns in this game and that the winner is simply the first to complete two laps.

Of course, this game favours the leader of the overall classification. This is not usual in games like that, but not unrealistic.

You can read the rules by yourself. If you understand them differently, let me know ;-) 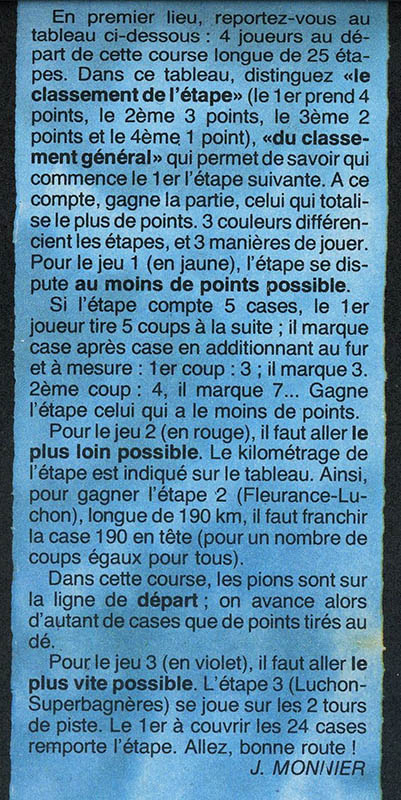 As mentioned above, the stages are those of the 1979 Tour de France. One could expect to have different colours for different types of "real" stages, I mean, one of the colours could be for flat stages, the other for hilly stages Or maybe for time-trials), and the third for the Alps and Pyrenées. But this is not so...

The table is limited to four players, but I do not see any reason why the game could not admit one or two more. 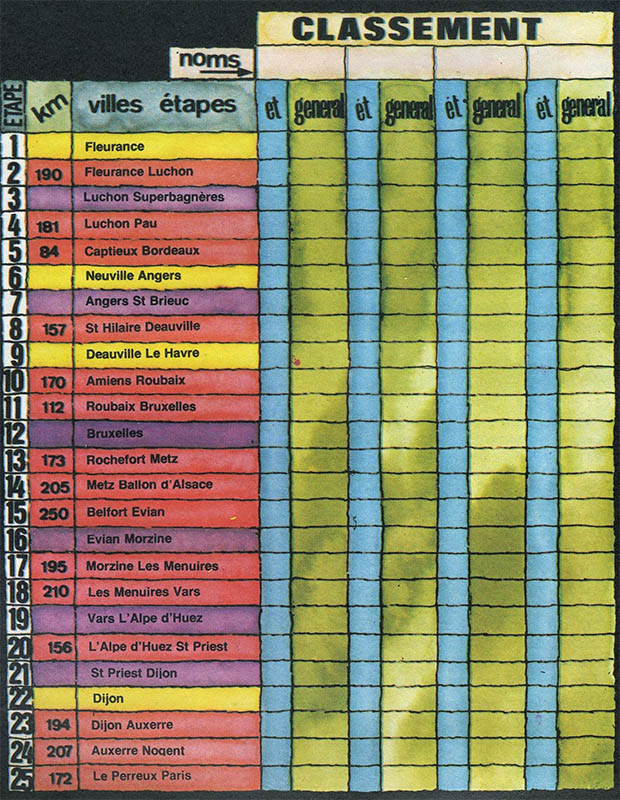 Thanks (again!) to Didier Maria for the hint.