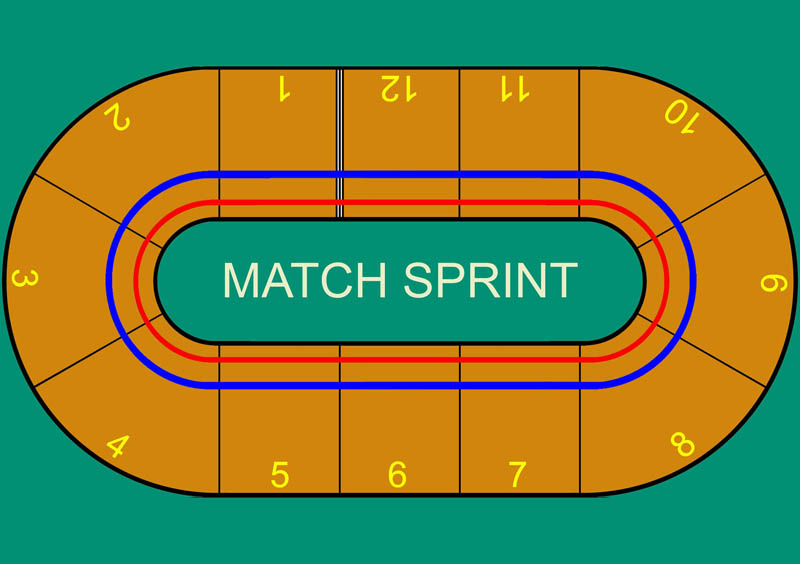 This game was sent by Sean Martin, who works in an elementary school and makes games intended to compel students to think about numbers and probability. Yours truly added the graphics and packed everything for a quick simple print-and-play game. You will just need a couple of dice.

Of course, the graphic part reminds of Keirin. I see both games as part of a series of games that are specifical for one track cycling event, as opposed of being suited for all events as is the case for most velodrome games.

As can be easily guessed, this game simulates a match sprint race. Match sprint races are frequently called just "sprint" races, but since that word has other meanings in the cycling world (and there are other games called "Sprint"), we decided to stick to "match sprint".

Naturally, a race is run by two riders, but since the game is very short (it takes less than one minute to play a one lap race), more players can play an elimination tournament. Also, as the game is biased (as in real match sprint races, one of the riders has an advantage... I will leave you guess what rider), it is advised to run two races, switching the starting position, and a third race in case of a tie for which the starting position is decided by lot. 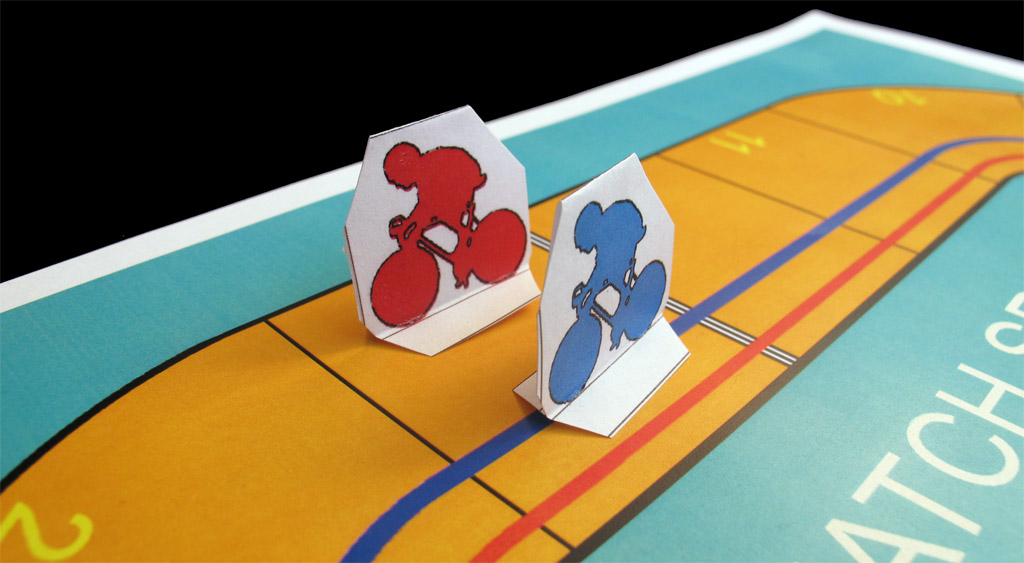 Starting position. Red trails, so it's his turn.

The rules are very simple:

- Both riders start the race on square 1 (it is thus an 11 square long race).
- It is always the trailing rider's turn. If the riders are in the same space, the second to arrive at such a space is considered to be trailing.
- On your turn, you have three choices: move one space forward, roll one die, or roll both dice.

That's all. Two of the three rules are unusual and, in my humble opinion, quite brilliant, specially the second rule. It gives the game a distinct "match sprint" race flavour. 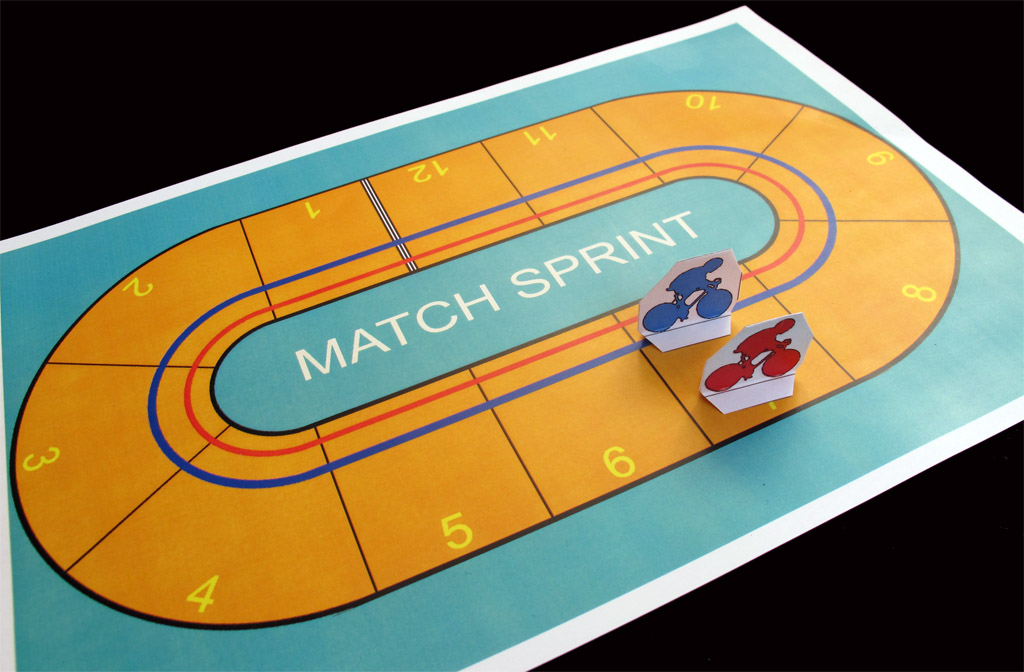 It's red's turn again. He should really win this race.

In theory, you could roll the dice right at the start, get 6+6, and win outright. But it's not very likely. So you'll end up handing the lead back and forth, one space at a time, until one of you decides to jump for the finish. But if your jump doesn't get you across the line, then you've only given your opponent a chance to jump around you with better odds.

Longer races (two or more laps) can be played. It makes a more tactical game, and it is still very short. A two lap race has some subtleties lacking in a shorter race: you might want to roll one die instead of both (that's subtle!), depending on the distance you have to cover. After all you don't want to get too close to the finish line and leave your opponent with an easy throw, do you?

However, a three-lap race is no subtler (only longer) than a two-lap one. I particularly do not see the need or interest of playing a race longer than two laps. 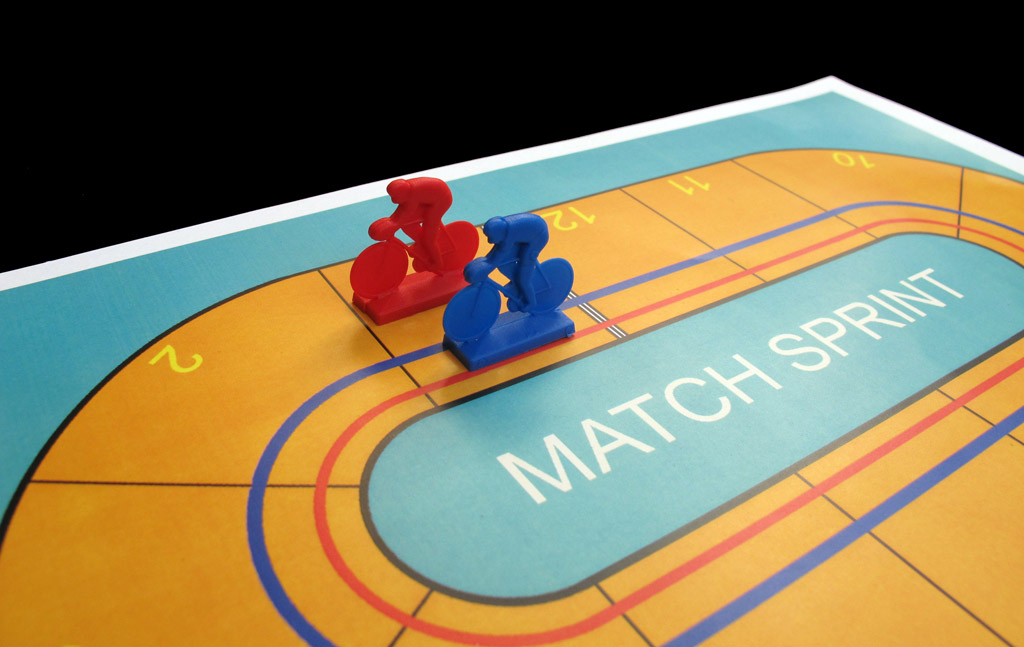 If you have these plastic riders from other games, they are the right size for this game.

Of course, there is an optimal strategy for this game, and of course the game is funnier if you do not know the right strategy (otherwise it becomes a mathematical game, a quite simple one). On the other hand, for the most mathematically minded, it can be fun to spend a while to find the optimal strategy. I warn you, there are some subtleties. I will not post my thoughts here (not wanting to spoil the game) but I would be pleased to discuss it privately.

A prototype by Sean Martin for a one die version of the game (the race is 5 square long). Cute.