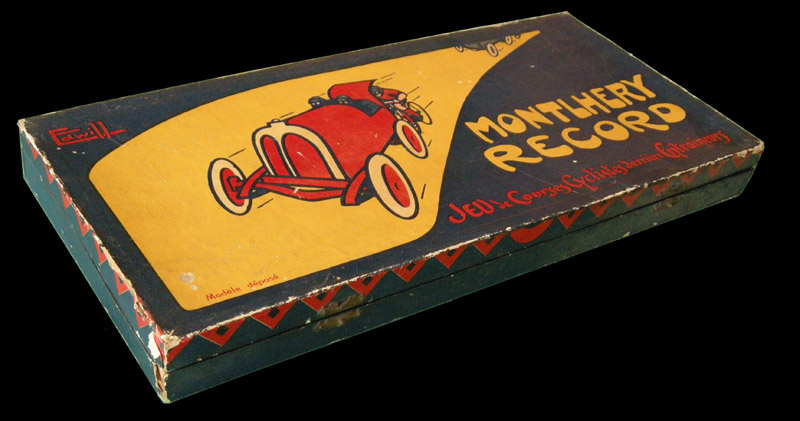 Very rare game from the amazing "Collection Pierre & Bilou". It represents a paced race where cyclists are paced by cars instead of dernys ( or even tandems, which was not unusual in the interwar period).

It seems that this race actually took place at least once, and that it was discontinued because a car driver (not a cyclist!) died in an accident. While the first part may be true (Monthléry is an automobile racetrack outside Paris which held races since 1924 and which, by the way, was famous as a speed record-breaking centre), I would not be so sure about the story of the dead car driver. In fact, I am still waiting to see reliable information about the car-paced race.

By the way, games which feature a motor-paced race are quite rare: I only know a couple of examples besides this one: the 1964 Campionati Mondiale di Ciclismo (by Corriere dei Piccoli) and Das Steherrennen. 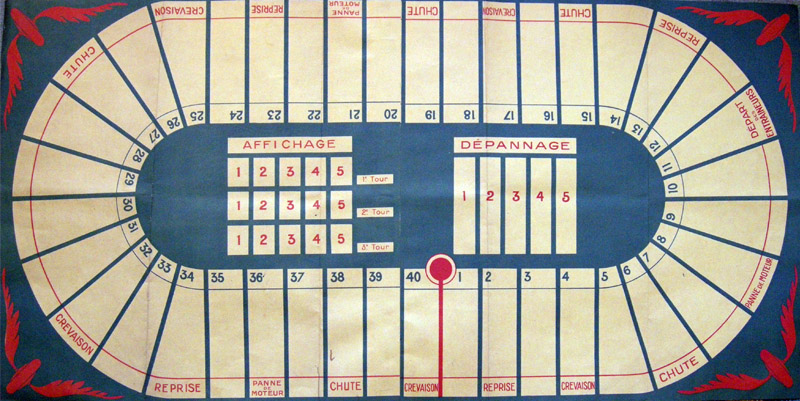 For quite a long time this game has been featured in this website with the "unfortunately we do not have the rules of the game" tag. All we could offer was guesswork. Fortunately, a mysterious correspondant has sent the rules to Pierre & Bilou who, in turn, have scanned the for all of us. See them below. 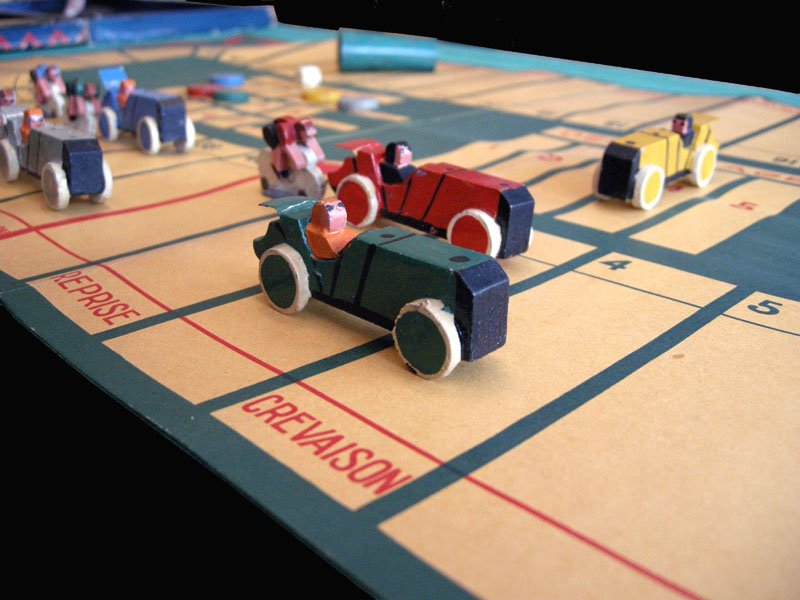 For the record, these were my guesses about the rules when I had not read them:

Unfortunately we do not have the rules of the game. All we know is that there are 5 teams composed of a car and a rider, one wooden counter per team, and that the game is played with a (single?) die.

The fifteen fields under "Affichage" on the left of the pelouse are most probably used to count the laps (thus the race would last three laps) while the 5 long rectangles on the right labelled "Dépannage" fit the cars too well not to be a garage where cars stay some after falling on one of the "panne de moteur" squares.

"Départ des Entraineurs", obviously, is the starting square for pacing cars (while cyclists probably start at the finishing line). So it is obvious that there must be a movement rule for non-paced riders and another for paced riders (and maybe even one for cars  if not followed by a cyclist).

"Chute" and "Crevaison" fields are quite usual in cycling games. I would bet they mean "Stay one turn" and "Stay two turns" (or vice versa).

"Reprise" fields, on the other hand, are not so clear to me. My guess is that they are positive fields where cyclists regain contact with the pacing car in case they have lost it.

An oddity is the fact that there is a mark on every other field except in the curves, which do not have incidents, while there is no other indication that might lead us to think of a special rule in the curves. 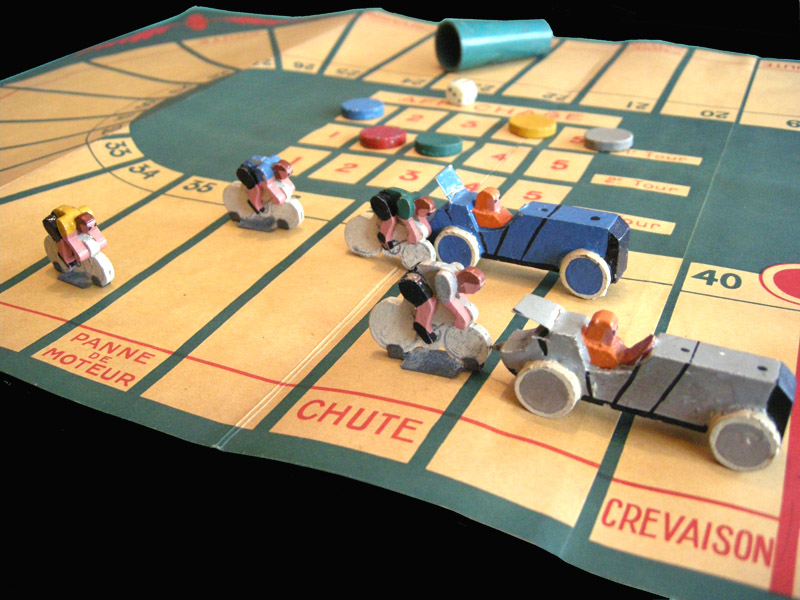 Well I was not so wrong. I completeley missed that the game is a betting game, and of course I could not have guessed the awards, but my guesses were quite good most of the time. Judge by yourselves. 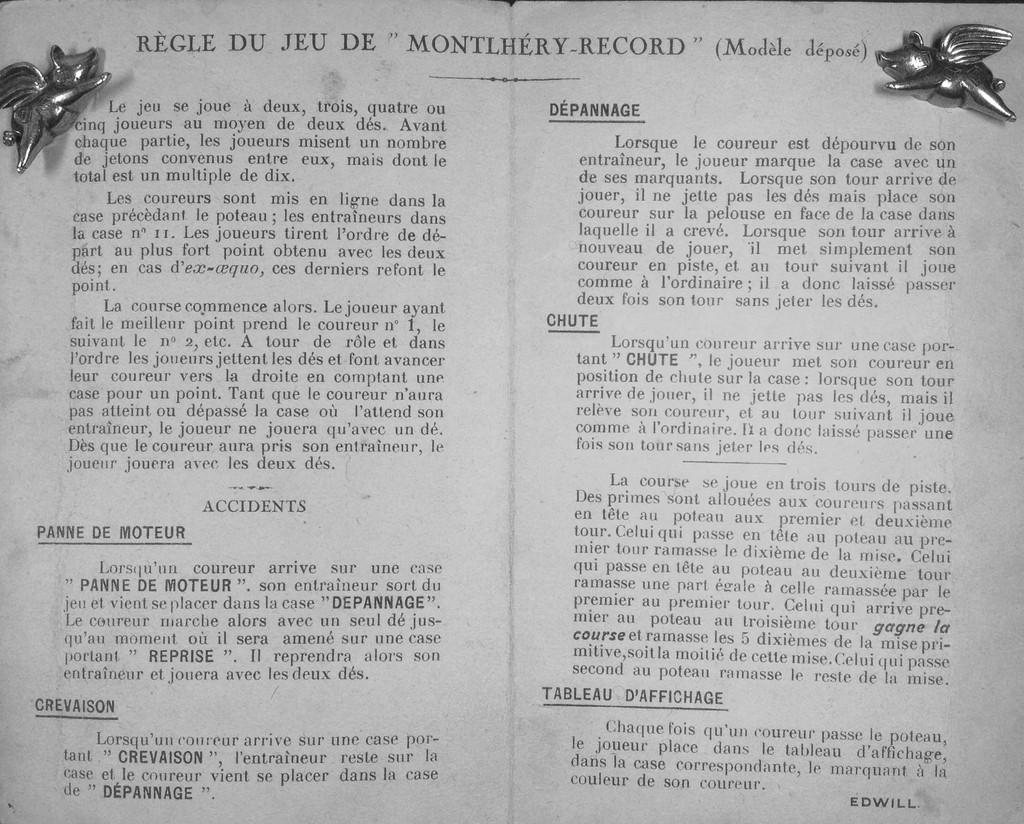 To commemorate the finding of the rules, Pierre (from the Collection Pierre & Bilou) has written a text about the possibility of having a car-paced race at Montlhéry. For those who do not know him, Pierre is a fine writer with a good mastery of French. Unfortunately, I feel unable to do him justice with a translation, so I just feature the text in French. By the way, I hope I can convince him to write a few more texts about some games that are special for him. 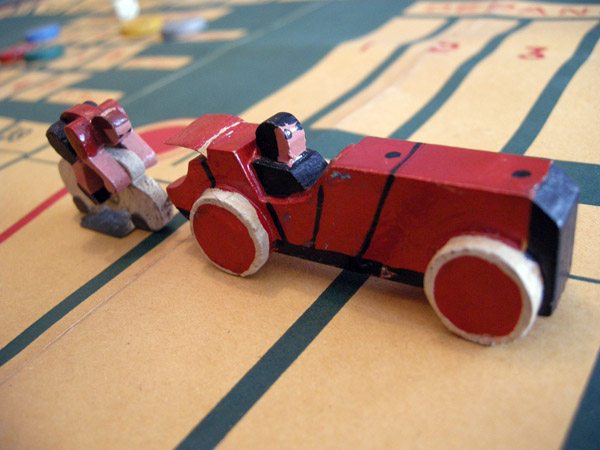 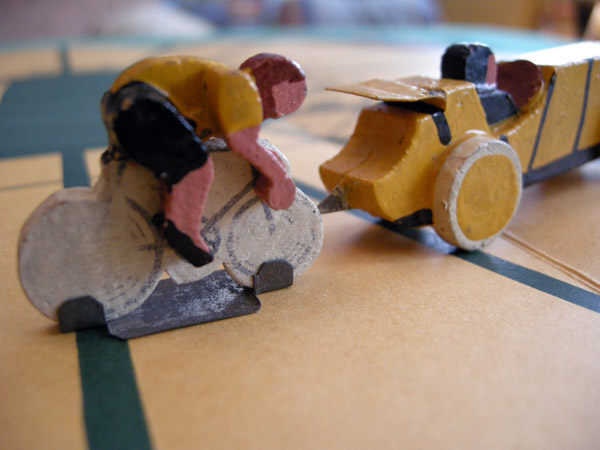