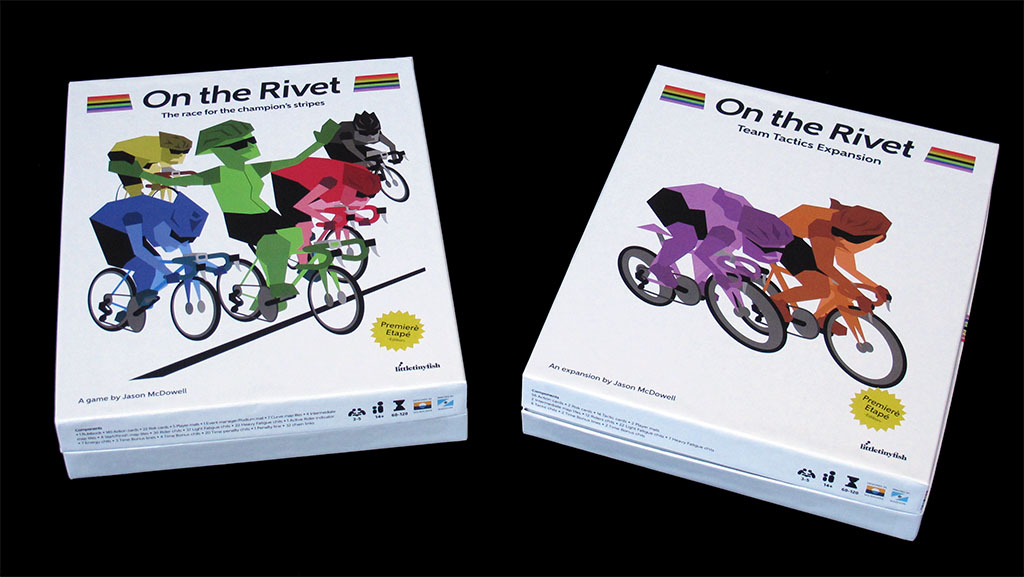 Sometimes it is not about the game but about its making. Jason McDowell is a designer and cycling enthusiast from Milwaukee who not only has made every possible effort to release this game but has telegraphed every step of the process via Kickstarter's updates. I discovered this game over one year ago (thanks Hans Plattner for the tip!) on Kickstarter. At the time the games was called "Visions Of Rainbows" but unfortunately the funding goal was not reached and the project was withdrawn on February 2020. However, Jason did not give up and the project was relaunched in August with a few changes and a new title, and this time the project was successfully funded and the game has been released.

Given all the information he has given us, let me mostly quote him at length while I add some comments::

The game's presentation was ambitious: "Visions of Rainbows is a card-driven, racing-themed strategy game that offers players a shot at winning a Grand Tour (at least on paper). Unlike many racing games where all the action is controlled by the riders up front, in Visions of Rainbows unique movement mechanics ensure every part of the race counts, no matter where your rider is located; from the front to the middle to the back. Chase, draft, lead and break your way to glory." I have seen similar statements before. This just means "this will be a game which will try to represent many things and will probably be long and difficult to play".

However, it was the next sentence that won me: "Good bike racing is not about the numbers, it's about the storytelling; this game aims to illuminate the tactical decision-making required to win a race." That's the way to put it. From this point on, I am willing to accept anything Jason says. 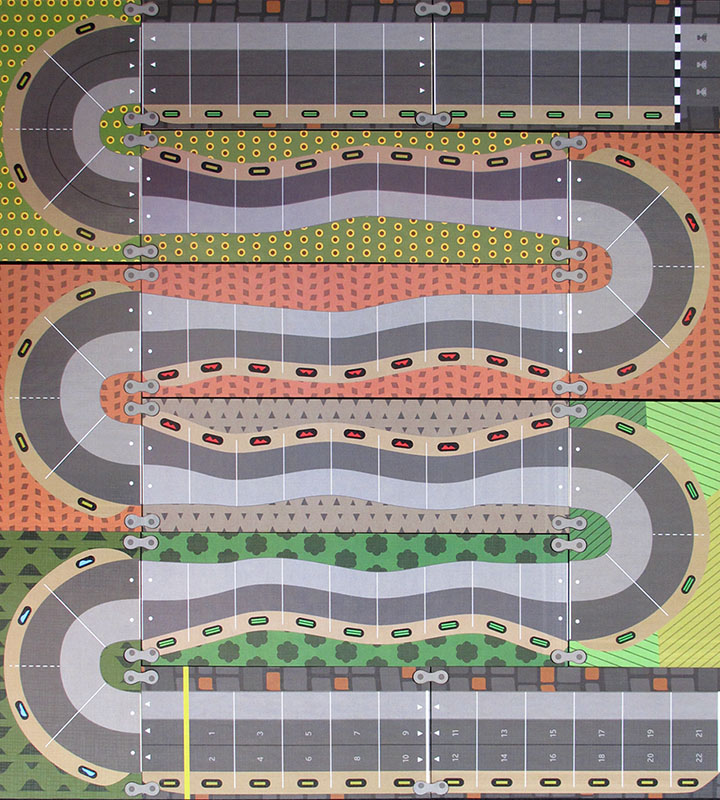 The board is modular, of course. Here is a sample path for a short (60-minute, according to the rulebook) race.

The game's first update (January 2020) dealt with the game's length: "I'm a person who likes long-form games. When I sit down at a table with my friends, I'm expecting we won't get out of there for at least a couple hours and thanks to the chit chat in between tactics, it's often longer than that. But I also understand that most people are not that kind of player; if one game doesn't go their way, they get at least one more shot to try again on something else before the night is done. So I cut the Visions of Rainbows map in half, simplified a couple of the actions, applied fatigue a little earlier... " and then he added "...and ran the game through a crash course of play-testing". So here is a guy who has not tested his game enough before launching the campaign. Of course, he is not the only one. This is common in self-released games: for every professionally tested game like Flamme Rouge we have one hundred enthusiastic self-released half-unplayable but nevertheless most-enjoyable cycling games. And I have nothing against them, and I love them, and I collect them.

In the same update, Jason added "I'm still gonna rack up all the course tiles when I play with my friends, but I know most of you will be very happy leaving half of them in the box." This explains a lot of things that happened later. I am going to skip some points (including a detailed description of the problems he was having keeping the playing tiles together) until the game was relaunched a few months later: "The basic idea behind the game is the same, but there are a few changes. The game has been split into a core set for 3-5 players to make the entry level of the game more affordable. Those who really dig the idea, or want to play with a larger group of friends (up to 7), can check out the Team Tactics expansion. [..] There was also a stronger emphasis put on shorter games to improve ease-of-access. There are still plenty of opportunities for those of you who appreciate the epic grand tours, though." 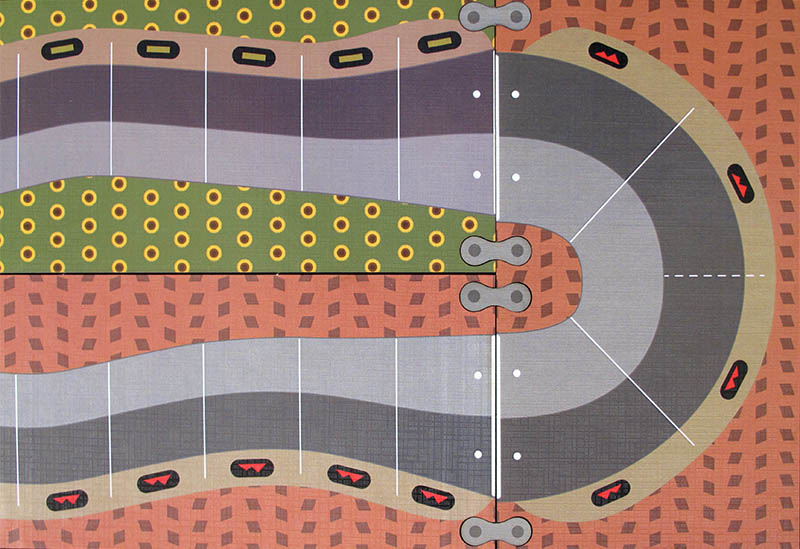 Finally the tiles are held together with these chain-links-like little parts.

As you can see, Jason knew all the time he needed to make a shorter game, but he really didn't want to. That's why he ended with two boxes, an entry-level box and an expansion for hard-core players. Unfortunately, what he was not so right about is the "make the game more affordable" part. The first version of the game was supposed to cost $60, while the finally released game costs $55 if you want only the basic box, but the expansion adds $30 to the price.

The reasons are is explained in the Kickstarter updates, of course, and are related to a much shorter production. In the end, only 100 copies of the core game and 50 copies of the Team Tactics expansion were made. Each of these boxes is adorned with a badge that says "PremiŤre …tape Edition." This is just for the initial run and Jason promises that it will not appear again if the game ever goes back to print. So Jason does not give up on his dream of having a larger release of the game,. Anyway, he has gotten quite far and should be proud of what he has achieved. According to Kickstarter, the game has had 87 backers so: if you want to get one of the last copies you should really hurry (and probably you will not get the expansion: Jason told me it was virtually sold out).

So much for the game-making. I will not say much about the game, except that it is a team race (which seems to be the promotion of the month) and that is represents a one day race (the Grand Tour rules did not make it to the current version of the rules). After all, you can download the rules and check them for yourselves. In the process you will discover that the rules are well-written. I mean, I am always suspicious of the rules of self-released games. I know rules writing is difficult and I often complain of self-released games rules being difficult to read. Jason's record of rewritings was not really promising: "as I continue to play test" (August!); "after the close of the campaign I'll be working hard to finalize all the rules and designs" (September!!), "after much more deliberation on the rules than anticipated (writing, re-writing, re-arranging, illustrating examples, re-illustrating examples) I finally felt the flow was correct and it's finally done" (November 2020!!!). However, the result is quite readable and the examples are well illustrated.

(Anyway, I should have suspected this guy could write when he posted the following: "I'm so pleased to report that 'On the Rivet' has been fully funded! There are still 3 days left before the campaign is finalized so still nothing is set in stone, but the breakaway is in the final kilometers and they haven't pulled the team cars out of the gap yet.")

By the way, both the downloadable pdf and the printed version of the rulebook include the expansion rules. 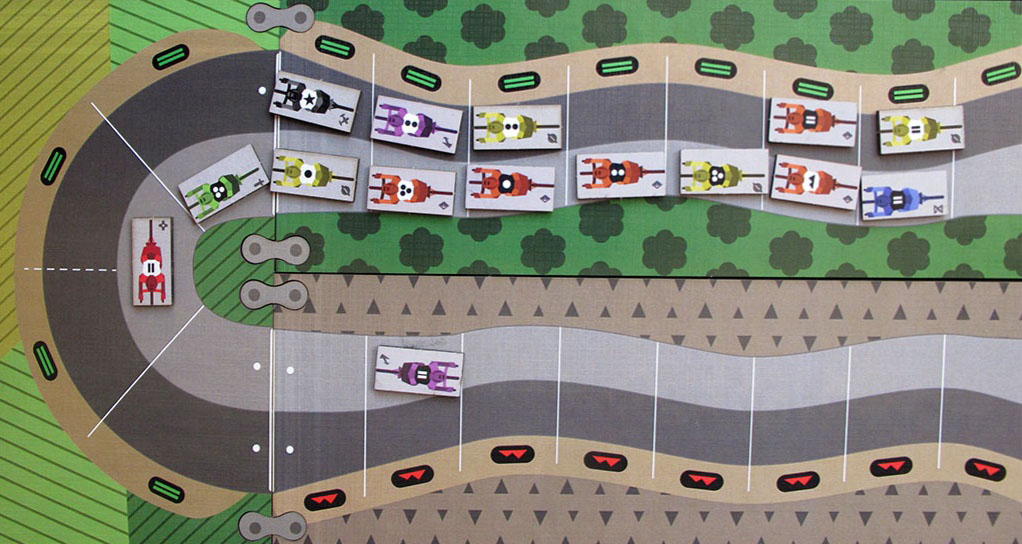 From the game's presentation on Kickstarter: "Your goal is to get your entire team of racers across the finish line in as high a position as possible because your score depends on the aggregate time of your team. But in order to have a shot at it, you must react in the moment, because your opponent's racers will be following your moves, and your racers will be following theirs. Each player draws from their own deck of cards and has the ability to lead (or pull) a line of racers, chase (or follow) the line, draft in between riders (follow AND pull) or make a solo break. It's important to know that every time you move a line of racers, youíll probably be moving your teammates ó as well as your opponents!" 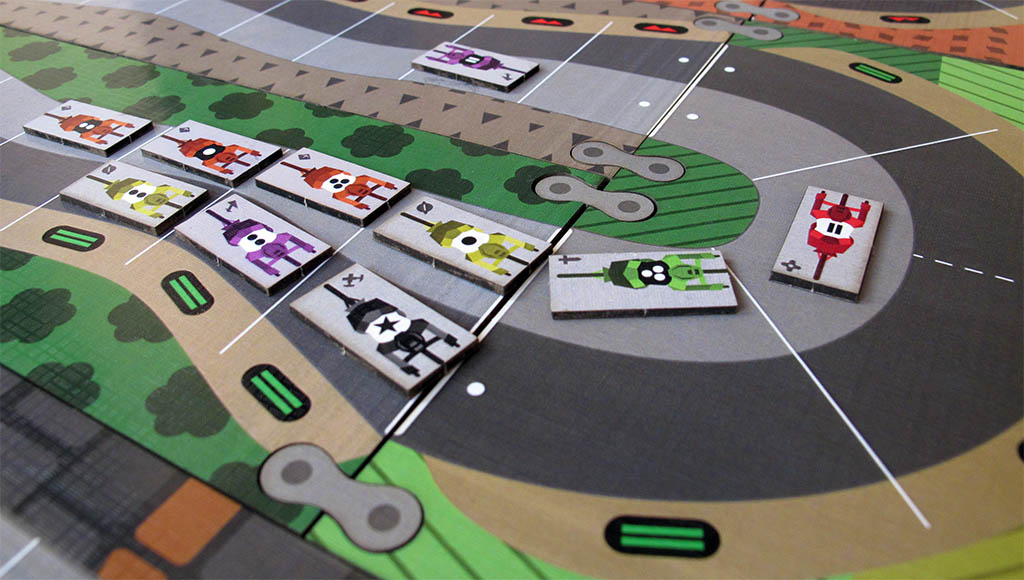 One last comment about the game title and its etymology: The expression "on the rivet" means "riding at maximum speed" (moving forward on the saddle is great for short, all-out efforts). According to the Wiktionary, "when riding at maximum speed, a racer often perches on the front tip of the saddle, where the shell of an old-style leather saddle would be attached to the saddle frame with a rivet". Suze Clemintson & Mark Fairhurst in 'P is for Peloton. The A-Z of Cycling' define it as "working flat out during a race - old-fashioned leather saddles had a rivet at the front and when you were working as hard as you could you were actually sitting 'on the rivet'". Those of you who speak French may have heard it as (according to Paul Fabre's 'Expressions du Cyclisme') "astiquer les rivets de la selle", "Ítre/se mettre sur les troir rivets",  "faire du bec de selle" or (my favourite) "avoir la selle dans le trou du cul". 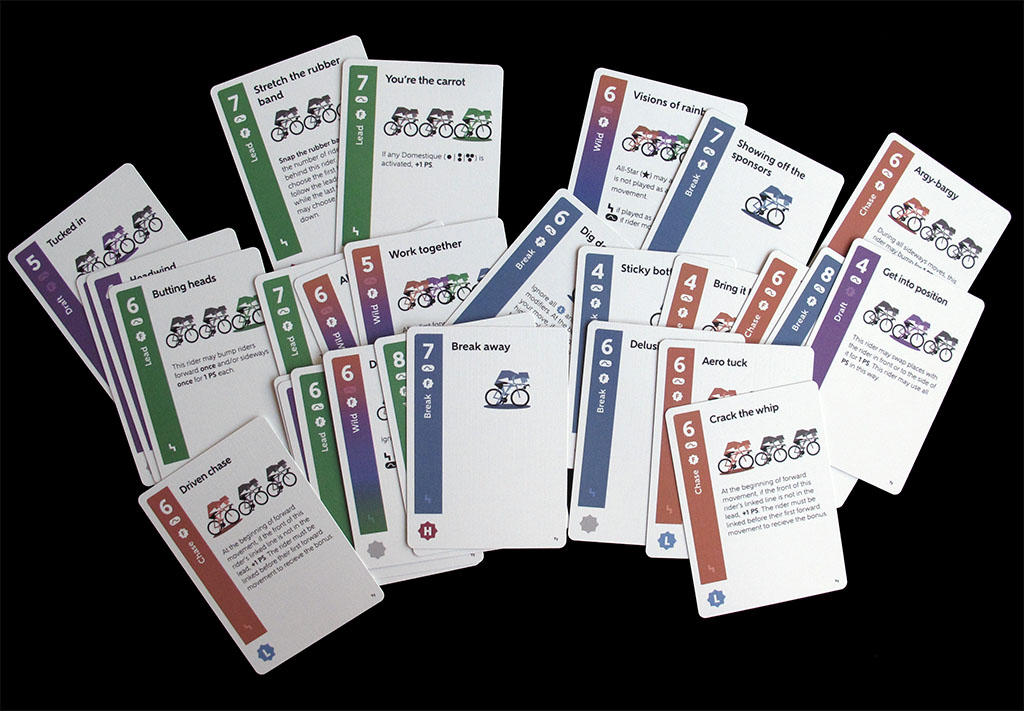 Action cards (each team has a 28 card deck) 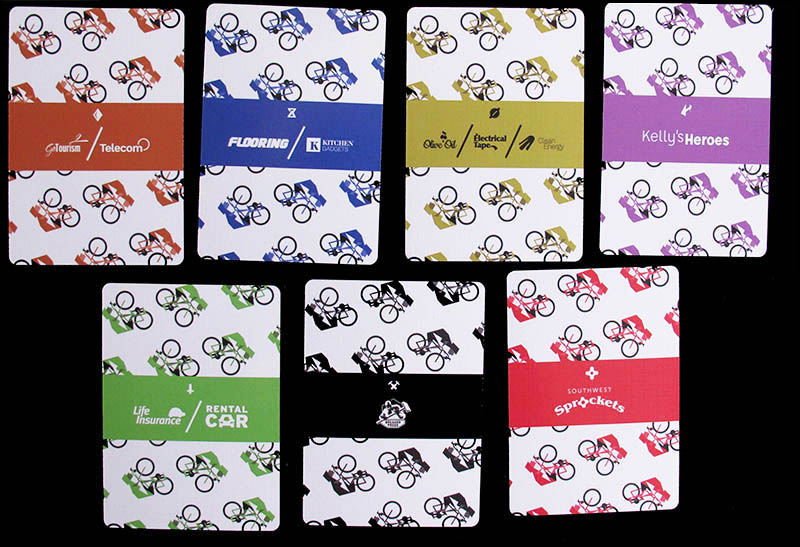 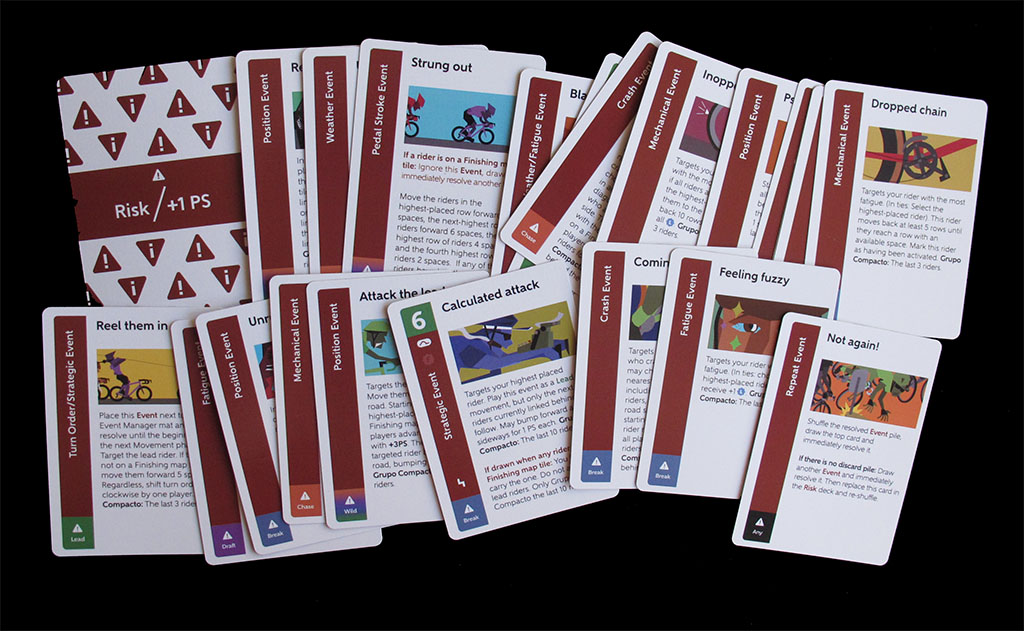 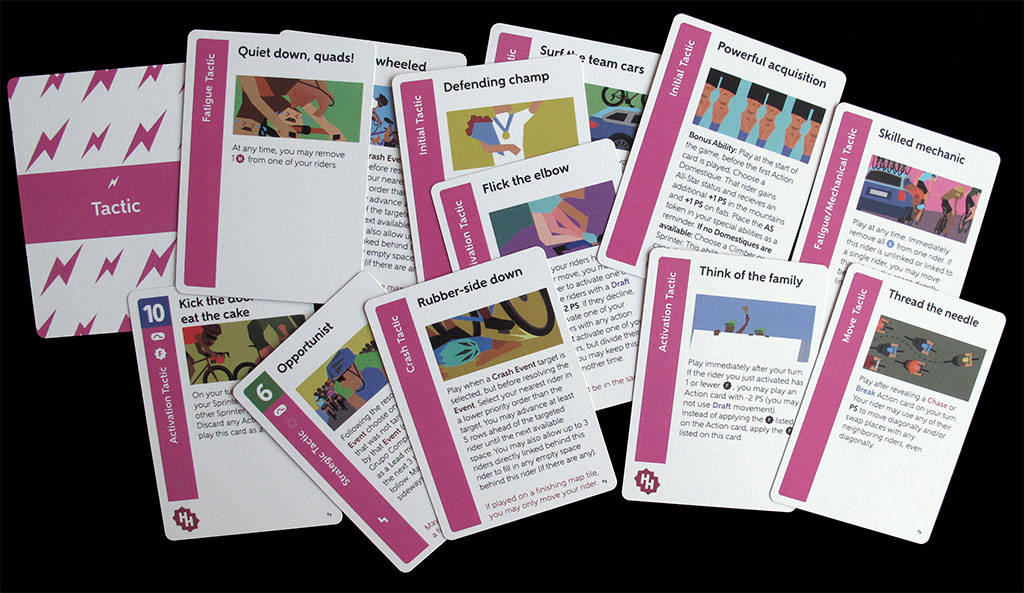 Tactic cards (found in the Expansion) 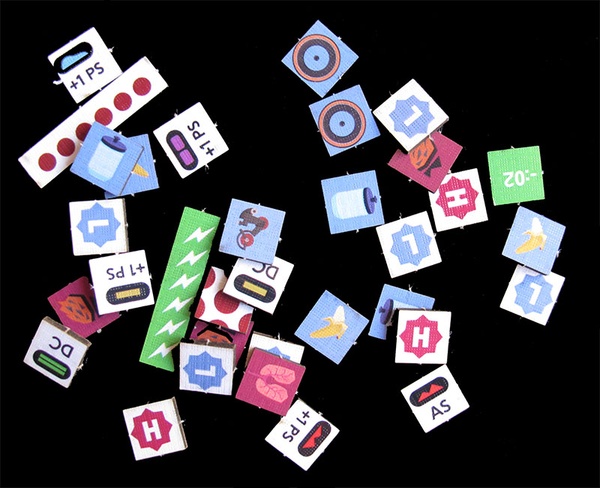 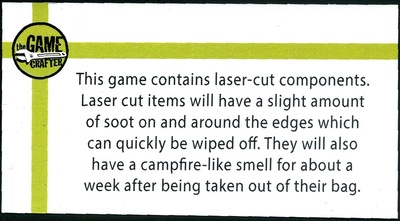 Unfortunately, this is true! 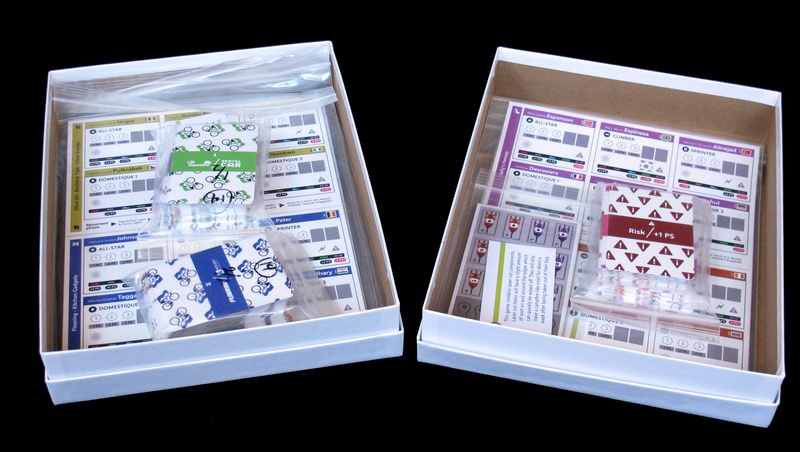