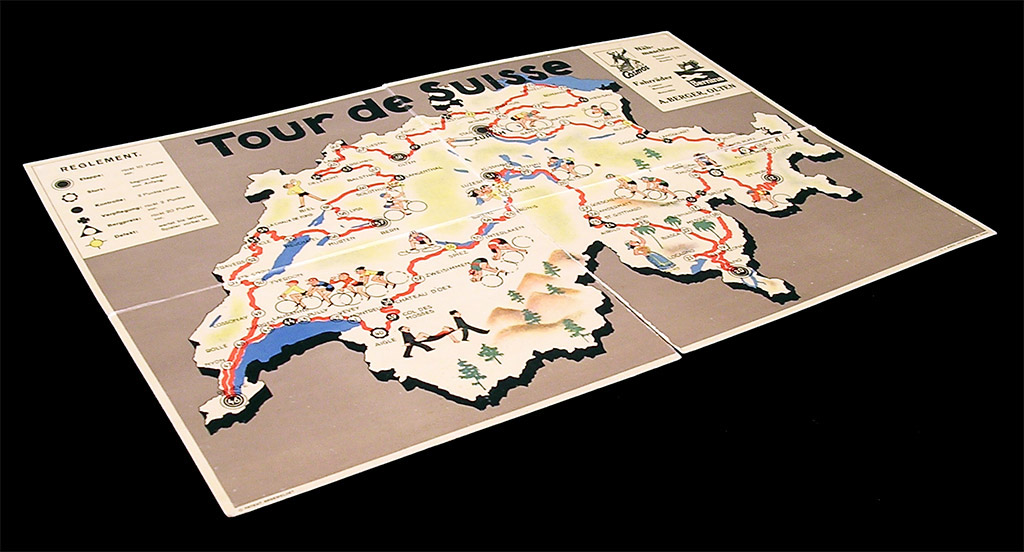 Promotional game for a store in Olten, Switzerland, that sold Cosmos bicycles and Bernina sewing-machines. I just have the board, which used to hang on somebody's wall judging by the marks of pushpins on the corners. I don't know if there was more to it, but there probably was, since this does not look like a poster but rather as a 4-fold board belonging to a box game.

When I first added this game to my website, almost 15 years ago, I obviously did not employ much time to think about it. I vaguely dated it as being from the 1970s, based on the touch and feel of the board, and stored the game, probably thinking that someday I would find more information about it.

I did not think more about this game until a few weeks ago when I received an email from Martin Käsermann which started with the words "Hi, I think that this game is much older" and provided some information and useful links, including one to a section of the official Tour de Suisse website where you can download a 200-page PDF file of facts and figures about the race.

Of course Martin was absolutely right and I have had to reexamine this game. 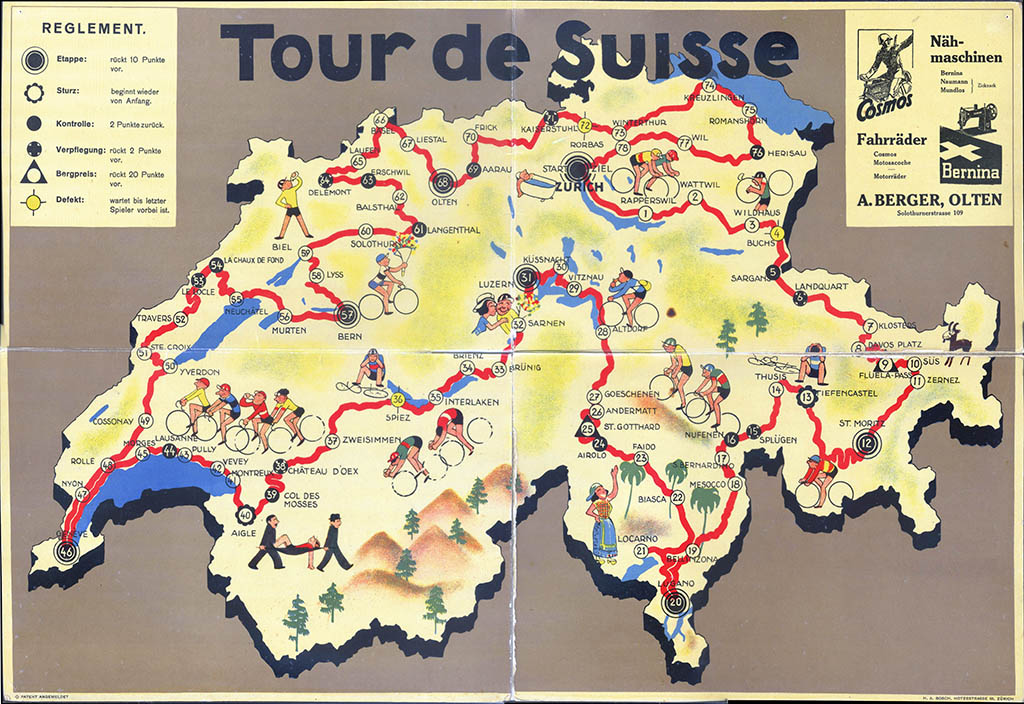 The first thing I should have noticed is that this game, unlike two almost-contemporary Tour de Suisse games (this one and this other one), which just "travel" around Switzerland, follows exactly the stages of the 1935 Tour de Suisse:  Zurich - St.Moritz - Lugano - Luzern - Genčve - Bern - Olten - Zurich. That is enough for me to date a game of being (roughly) of that year. So I have changed my mind and now I think that the game is from 1935. 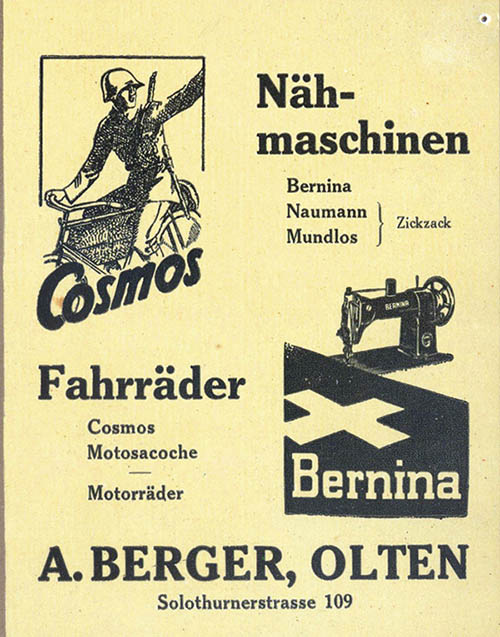 Martin adds some interesting information about the brands promoted by this game, which I am happy to share:

- The person on the Cosmos bicycle is a Swiss soldier. The uniform is around WW2. The Swiss army used this type of bicycle between 1904 an 1988. They were built by Cosmos, Condor, Schwalbe, Zesar and MaFaG. Cosmos built army bicycles mainly before WW2. In the 1950 they switched to hospital equipment.

-  The Bernina sewing machine would also be from the 1930s, as Bernina produced the first sewing machine for home use 1931. The model in the 1940s differs from the one in the add.

By the way, Martin tells me that he has seen a copy of this game with the Cosmos promotion only. 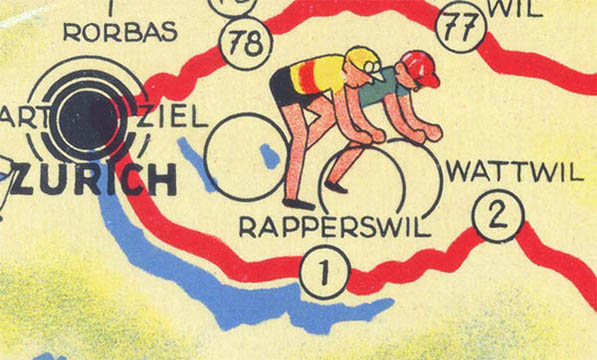 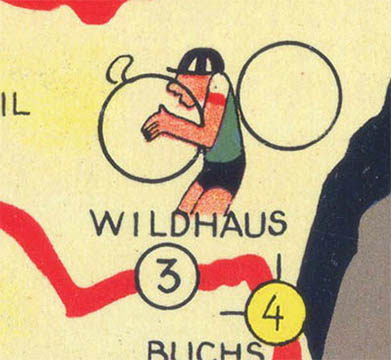 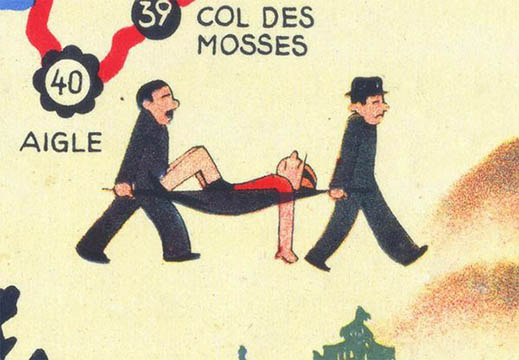 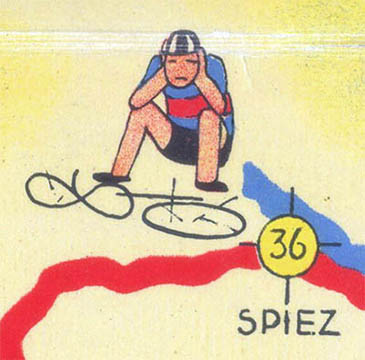 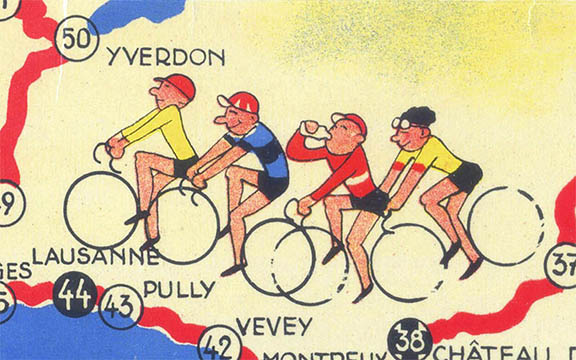 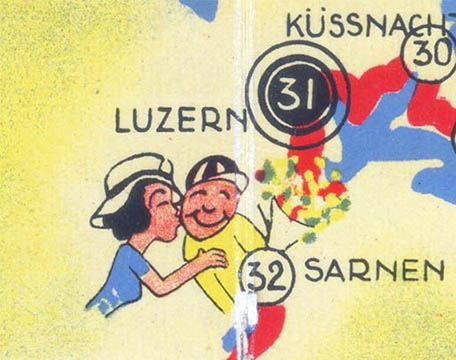 The graphics in this game are perfectly compatible with the game being from 1935. The more I look at it, the more I wonder what went through my head when I thought that the game might be from the 1970s.  My first (and weak) excuse is that I added this game to my site almost 15 years ago (in 2006) and back then I did not know much of what I know now, and I was quite conservative about dating. When in doubt, I dated the games as being recent.

However, there is something else about this board, something that is not easy to show on a picture but that makes me doubt that the game is 85 years old. The touch and feel of the paper (in this case, light cardboard) is not that of a game of this age. I think my copy of the game might be a reissue. Anyway, I am not sure either.

On the bottom right corner of the board we find a the name of a Zurich publisher of which I only know that he was active in 1945-46 from a different address in Zurich (in Dreikönigstrasse), at the end of the forties in Zollikon, again in Zurich in the early 60sand in Aarau in the 1970s (unless there is more than one publisher with the same name). If he was in Hotzestrasse BEFORE moving to Dreikönigstrasse, it would mean that this board is probably from 1935 and that my "touch and feel" instinct is completely wrong in this case. On the other hand, if the printer moved to Hotzestrasse later, that would mean that this board is probably a reissue of an older game.

Anyone familiar with Zurich publishers and willing to help? 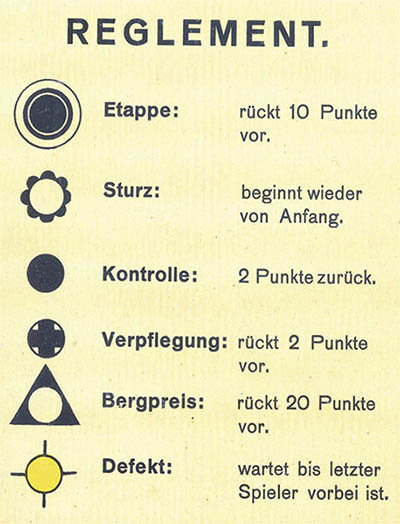 Finally, I said above that this four-folded board makes me think that (or, again, feels like) this board might belong to a boxed game. However, though this is not a fixed rule, one would expect from a box game to have a more elaborate set of rules. There is still a lot to be unveiled about this game.

Thanks to Martin Käsermann for his help.