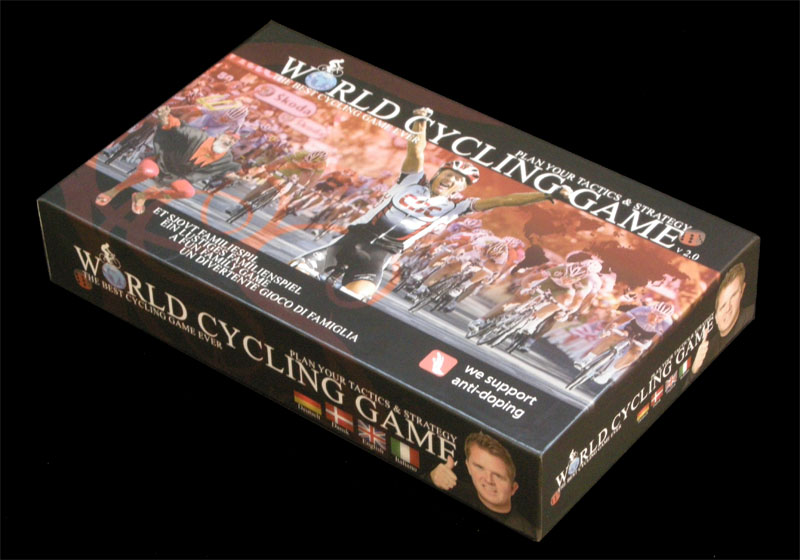 This is the only game I know that has been designed by an ex-professional cyclist. In case you do not remember him, let me say that Niels-Kristian Andersen was a professional between 1996 and 1998 and, though maybe he was not the most famous rider, he surely had an insight of cycling races that other game designers do not have. This only makes it a worthy game!

As you can see, the game offers a modular track with the nice feature that some of the road tiles have riders names on them. This gives a nice feel for the game. Most of the riders run in Andersen's time (not Coppi!). He has even added his own name, which I find really cool.

There is also a Rolf Sorensen tile. You may remember him, he won some important races. In the nice rules booklet that come with this game, Sorensen plays the role of host, explaining the rules. (Some people have misunderstood this and assumed that the game was designed by Rolf Sorensen. It is not so). 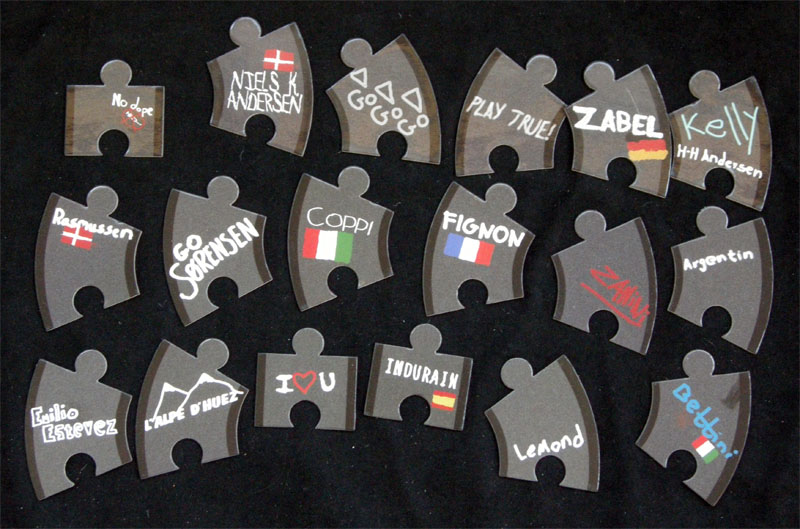 The game is an ambitious one who tires to cover all the aspects of cycle racing. It allows you to play either a one day race or a stage race, and of course has rules for almost every aspect of cycling races, including time trials.

The teams are composed of three to five riders, depending on the number of players, which can be chosen among riders with different specialities (leader, climber, sprinter, rouleur). The specialty is marked by the colour of the plastic base on which the riders stand.

The game is basically a dice game. It uses one D6, one D8, two D10s and one D12 depending on the type of rider and the road on which he is. The D12 is used only by sprinters. Then we have some tactical cards as an energy management device. For instance, you can only use two attack cards for the same rider during a race. It is interesting (and original) that you chose the cards (among "Attack", Defense" and "Help") before the race, as a part of your tactic plan. 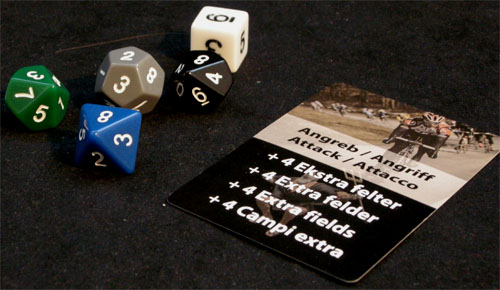 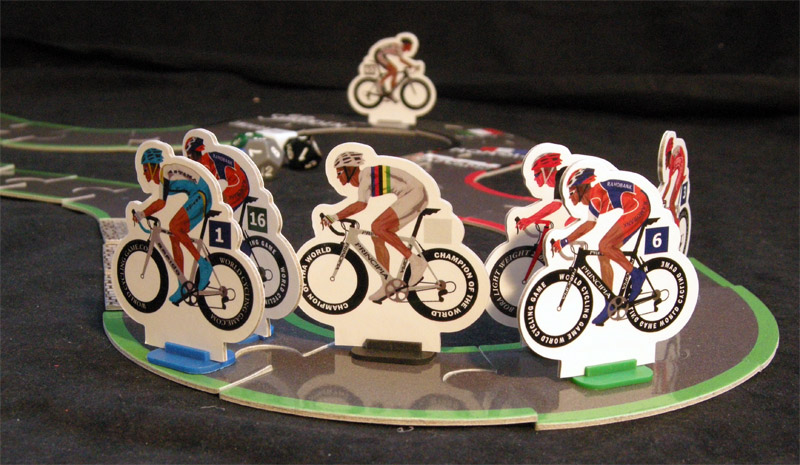 The colours of the riders are very similar to the ones of real teams As you can easily imagine, there was a rights problem somewhere. The riders are made of cardboard andt are quite nice, as you can see. In general, all the elements of the game are nicely produced. 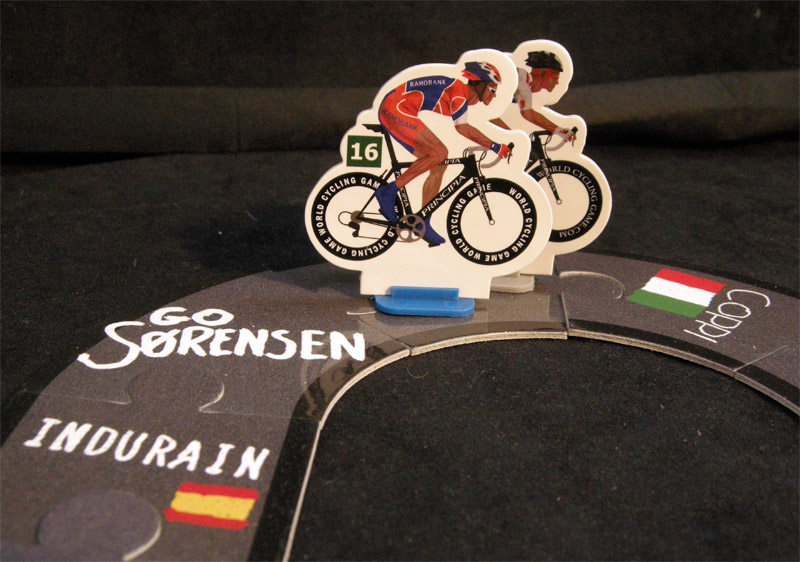 Here is Rolf Sorensen lending a hand in the rules booklet. In the booklet we find the layout of the 21 stages for a complete Tour de France, but you can download many more races from the game's website. 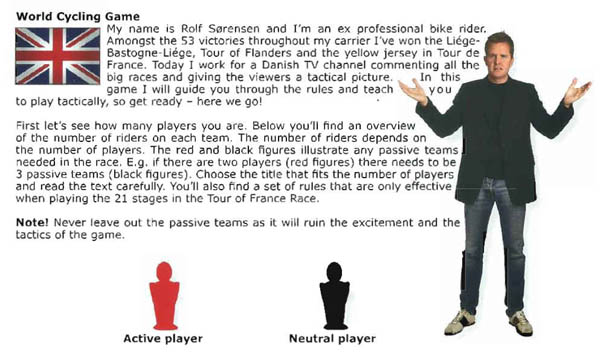 The game is subtitled "The Best Cycling Game Ever". Of course it is not. There is no such thing as "the best cycling game" ...and in case there was, it would be one of mine  ;-)

It is strange how Tęte de la Course is promoted in a similar way ("the best simulation of cycling races") while both games have some similarities. Both are ambitious games produced by someone unrelated to the game industry, both are nicely produced and both look slightly undertested to me. (Underrtesting is a logical consequence of a game being made by enthousiasts outside the industry's regular channels, and is a very common feature in cycling games. No big deal about it). 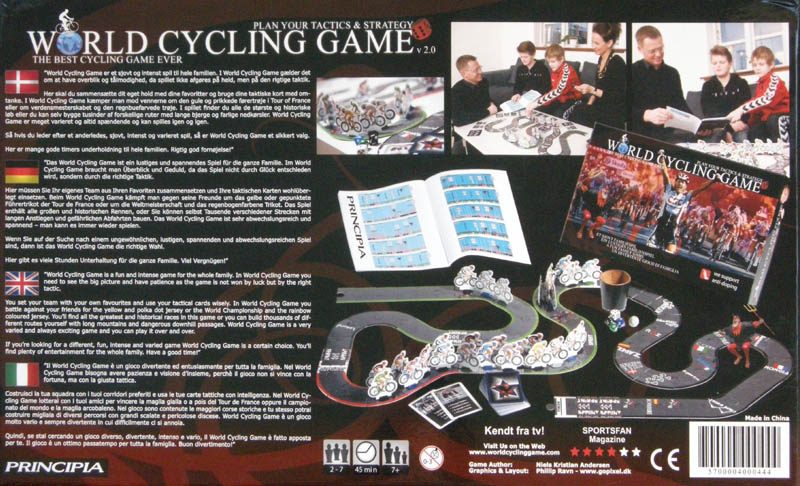