According to Juan Hermida's Plastic Toy Figures Made in Spain 1948-1978  (see bibliography), the first cyclist manufactured in (post-war, we have to assume) Spain were made by Barcelona artisan José Maria Castro Cheser in 1954. In 1955 Mariano Candó Carita (also from Barcelona) was also making toy cyclists. Generally speaking, it is difficult to tell who made what since the cyclists you may come by these days are unbranded and out of context. Many of them are still copies of the French Aludo figurines and have been (mostly wrongly) attributed to Manuel Sotorres. My personal opinion is that Sotorres riders are well documented since we have the original boxes, and that the riders that are not in these boxes, must not be gladly attributed to Sotorres (though some may still be from him).

Painted cyclists were most often meant to be sold in toy stores, as opposed to the the cheaper unpainted cyclists meant for the street vendor circuit. Anyway, when found them these days, they are often difficult to identify. 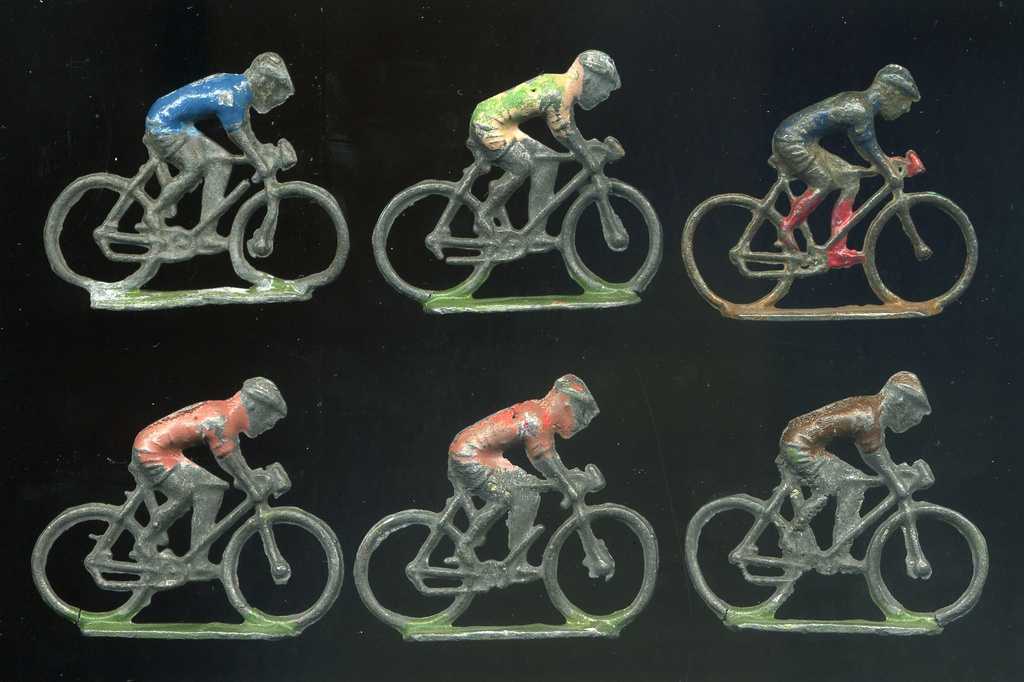 Rare lead cyclists, bought in Spain, probably Spanish, probably from the late 1950s or early 1960s. Cant't say much more about these.

By far, the most usual riders in Spain were of the sprinter-and-climber type (or whatever you might call them) inspired by the French Aludo riders. I call them "the two-position" peloton. A modern game such as El Juego de los Ciclistas chose these riders (at least for its original edition) since they represent the Spanish idea of a toy cyclist. Of course Manuel Sotorres made these too, but not all the riders you find of this type were made by Sotorres. 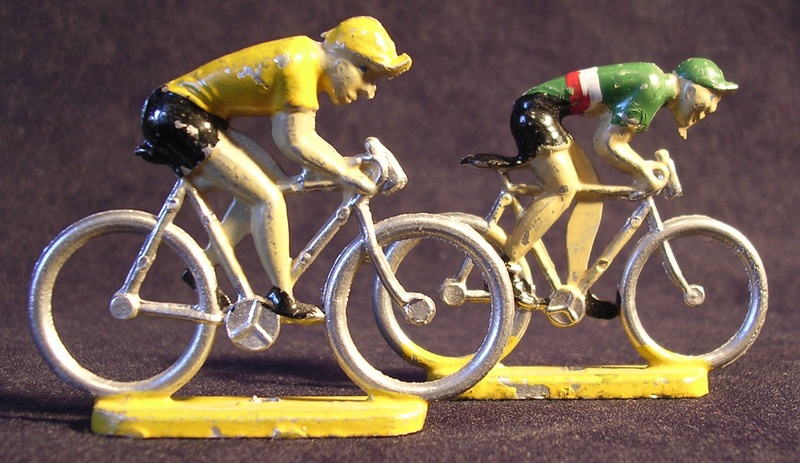 This is the original French "2 position" set made by Aludo. Just for reference. 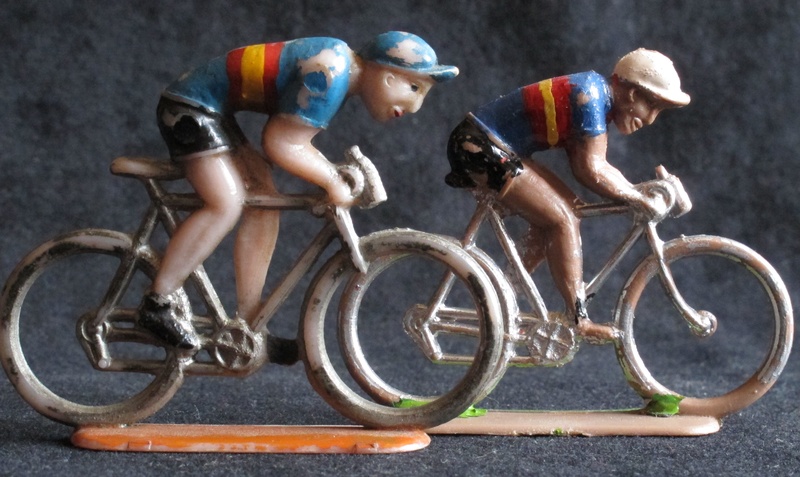 Compare these two Spanish 1960s riders. The "climber" on the left is made in stiff (breakable) plastic while the "sprinter" (sitting) rider on the right is made of soft (flexible) plastic. I don't know much about plastics; they might be polystyrene (stiff) and polyethylene (flexible), but I will just refer to them as "stiff" and "flexible" or some similar non-technical jargon. 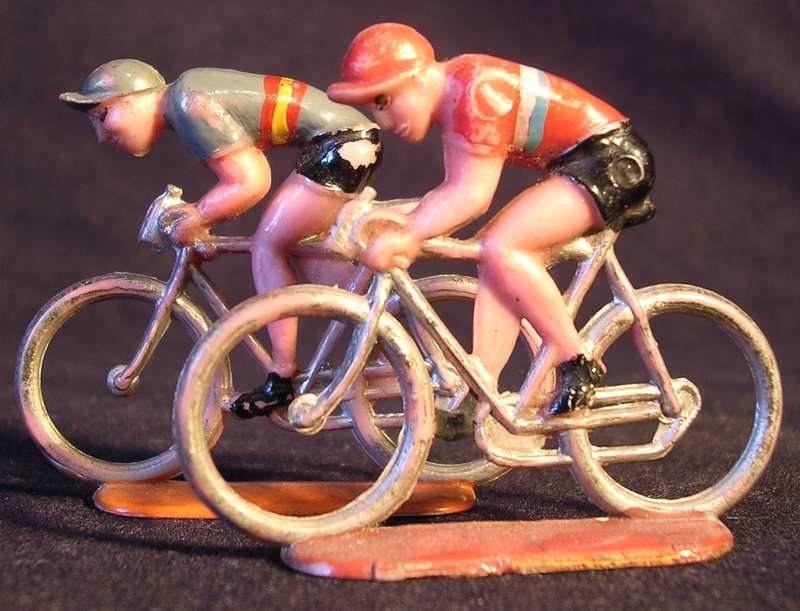 Another set of  riders made in stiff plastic, probably in the 1960s. These are quite "flat", almost two-dimensional.

And still another set of  riders made in stiff plastic, probably from the 1970s. The distinctive feature of these is the painted eye. 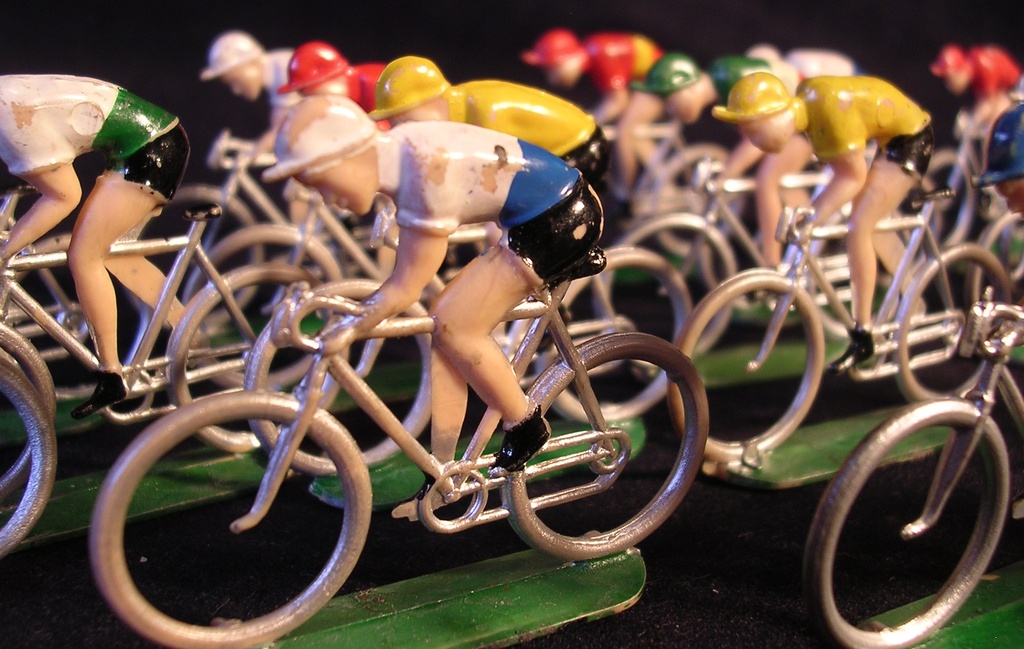 Spanish 1970s riders made in stiff plastic. These unbranded cyclists were pasted onto carboard and sold in a cellophan bag. I remeber buying ten sets so that I had ten riders per team, which was the usual number in the 1970s. Being made in stiff breakable plastic, not all of them survived, but I still have a decent-sized peloton.

This is exactly how I bought them in the seventies. The exact same colours. 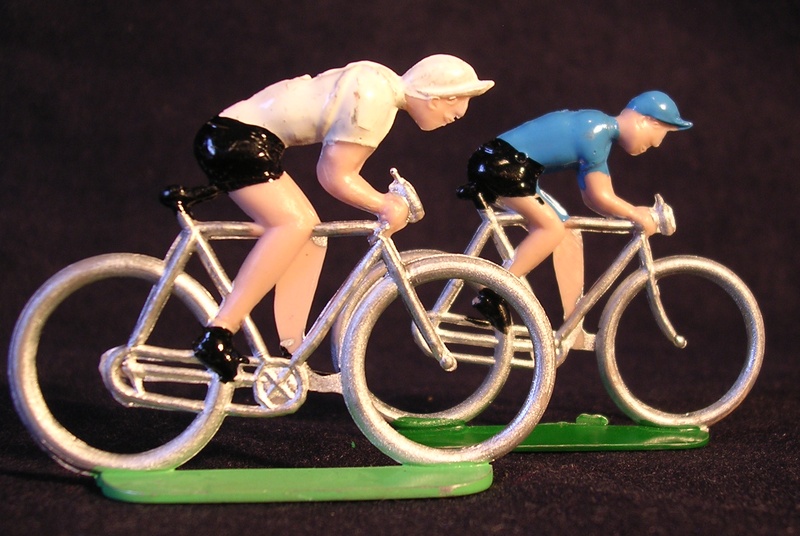 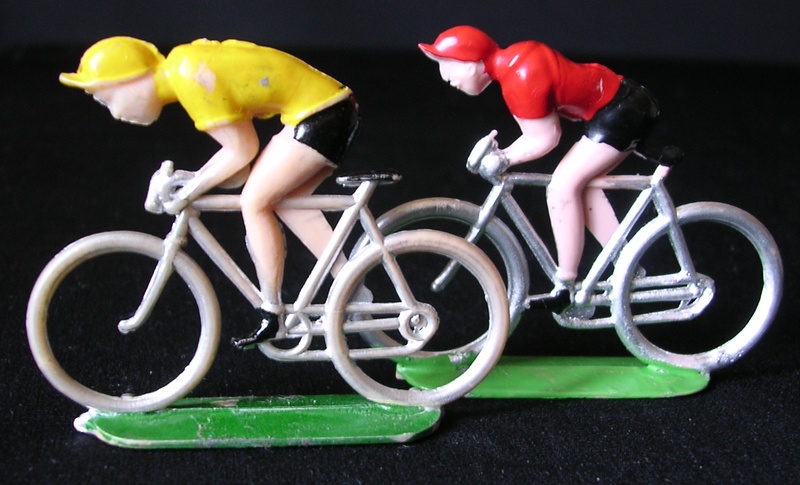 If you compare the riders that I played with in the seventies (the one in the yellow jersey in this pictue) and those found in the 1980s game Sprint (the one in the red jersey), you may notice than the "later" cyclists are inspired by (or copied from) an earlier model since you can still see the traces of the tires wrapped in the shoulders of the cyclist (only in the rider in the "climber" position"). If you look closely at the riders in the Sotorres boxes you may also find traces of tires in some riders of the Aludo-inspired-climber position, though not in others. By the way, these two riders are made of stiff plastic and they are NOT made by Sotorres. 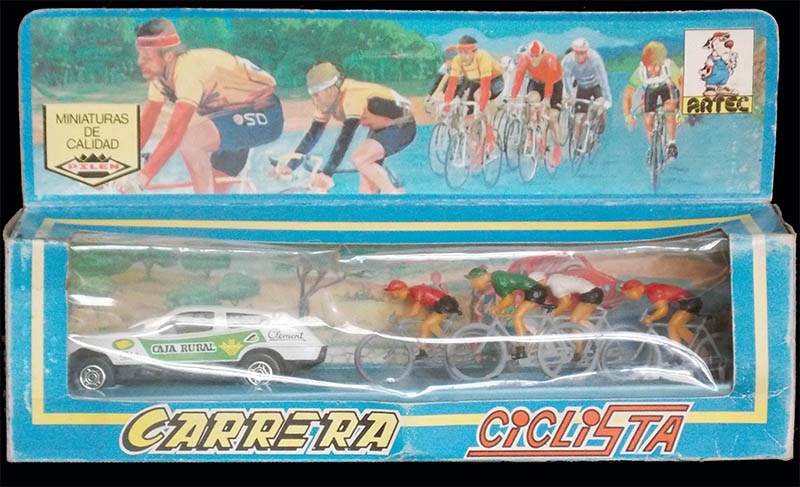 Box made by Artec-Pilen (from Ibi, Alicante) with a Caja Rural team car (Kelme, ONCE and Reynolds teams cars were also available) and four Aludo-inspired cyclists. They are very similar to those used for the game Sprint, but the colour of the bicycle is different. I have seen such boxes with Sotorres Starlux and Salza-inspired riders too. These boxes were made in the late 1980s or early 1990s. 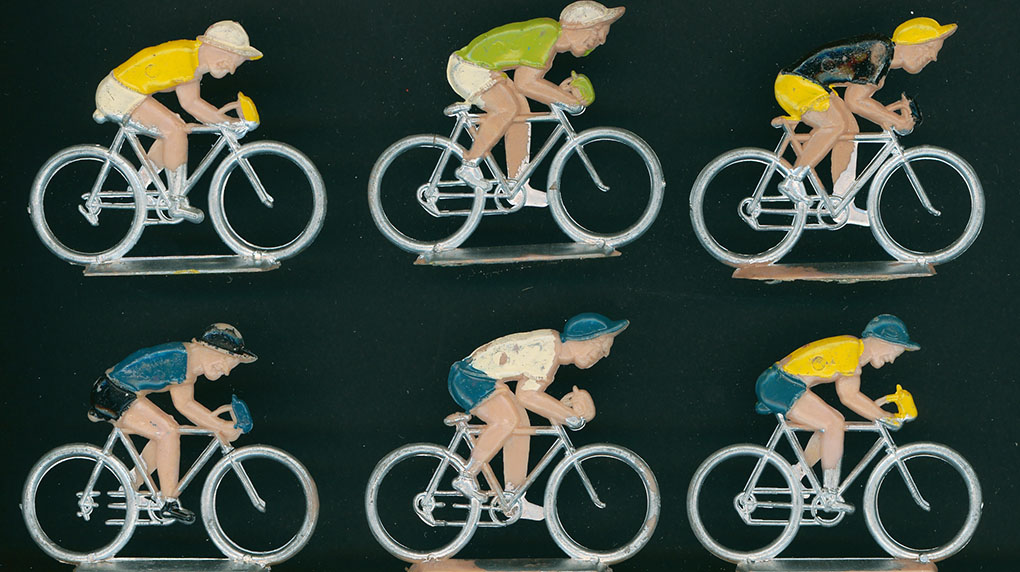 These riders are flatter than the rest featured in this section. They are almost 2-dimensional (I should have included a zenital picture), not so dissimilar from the mid-sized Montaplex set. However, these are made of stiff (thus easy breakable) plastic. The former owner inscribed the names of late-60s-early-1970s cyclists. Some of them were not so famous outside Spain (Eduardo Castelló, Jesús Aranzabal, Andrés Gandarias). Wagtmans was not so well-known either (and has his name misspelled). I guess the owner had a much bigger peloton and/or a penchant for obscure riders. 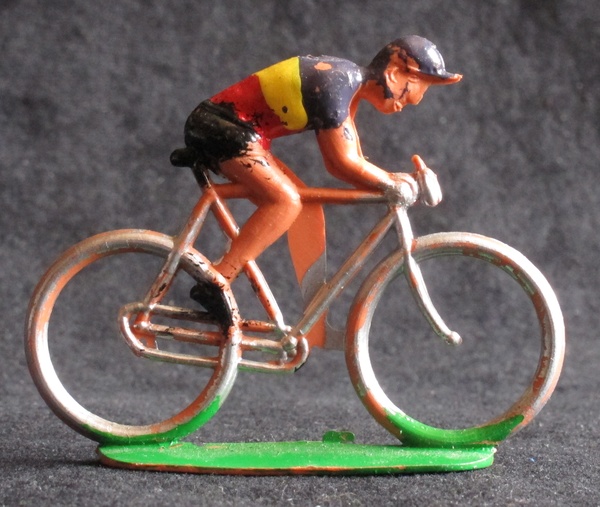 Here is an unusual colour variation. These rider is wearing the colours of the Spanish Republican flag (though inverted, red should have been on top and purple on bottom). I found it quite recently, though it is obviiously not so recent. What makes this one special is that it  could not have been sold (or even made) in Spain before 1975, as we still were under a fascist dictatorship. By the way, the Spanish cyclists in the 1936 Tour de France (running for the mixed Spain/Luxembourg team) were wearing jerseis in the republican colours (though all the available pictures are black and white). The Spanish civil war was declared during the Tour, but the cyclist finished the race nevertheless (and some of them did not return to Spain).

Unpainted cyclists were mostly sold on the street vendor channel, or distributed as bonuses with various products. According to Jesús Hermida, at one point there were in Spain around one thousand small manufacturers with plastic injection machines producing all kinds of plastic figurines in a huge variety of sizes and packages, sometimes operating from their own homes. They made their own molds, almost always illegal copies of other brands products. 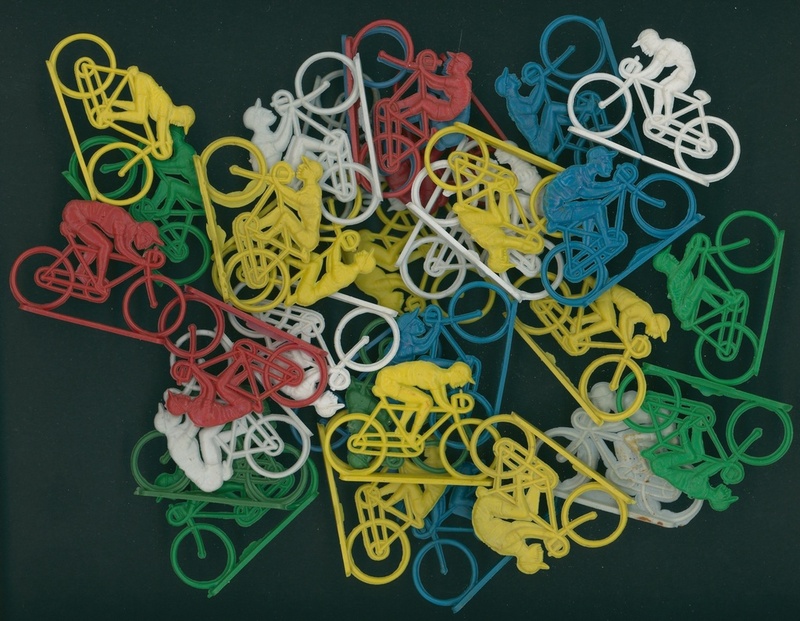 These cyclists are 52 mm long. As you can see, there are 6 different positions, though some are not so different. These cyclists are not only of the same size, but all of them are very flat and unstable. Their base is 42x5 mm, in all six cases. But this does not compulsory means that they are from the same maker. Some may have been made by Esjusa for Montaplex bags, some maybe not. Besides, some of these are more common than others, which might be a sign of different origins. It's hard to tell. 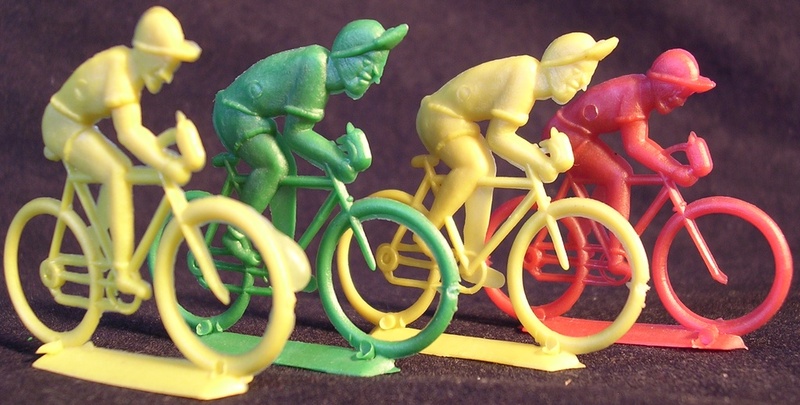 On the other hand, these are definitely Montaplex two-position cyclists (52 mm).

As far as I know, these 50mm long riders might have been give as bonuses with Elena washing-machine detergent. Not sure, though.