This game was made for the opening of the Tissot Velodrome at Grenchen, near Bern. The title of the game is a play on words with the game "Eile mit Weile", which is the way the Swiss call their own variation of Parcheesi (while the Germans call the game "Mensch ärgere Dich nicht"). Unfortunately, the game is sold only at the Velodrome premises. That is why, although the staff are really helpful once you get there, it has taken me almost ten years to find a way to get my hands on the game. 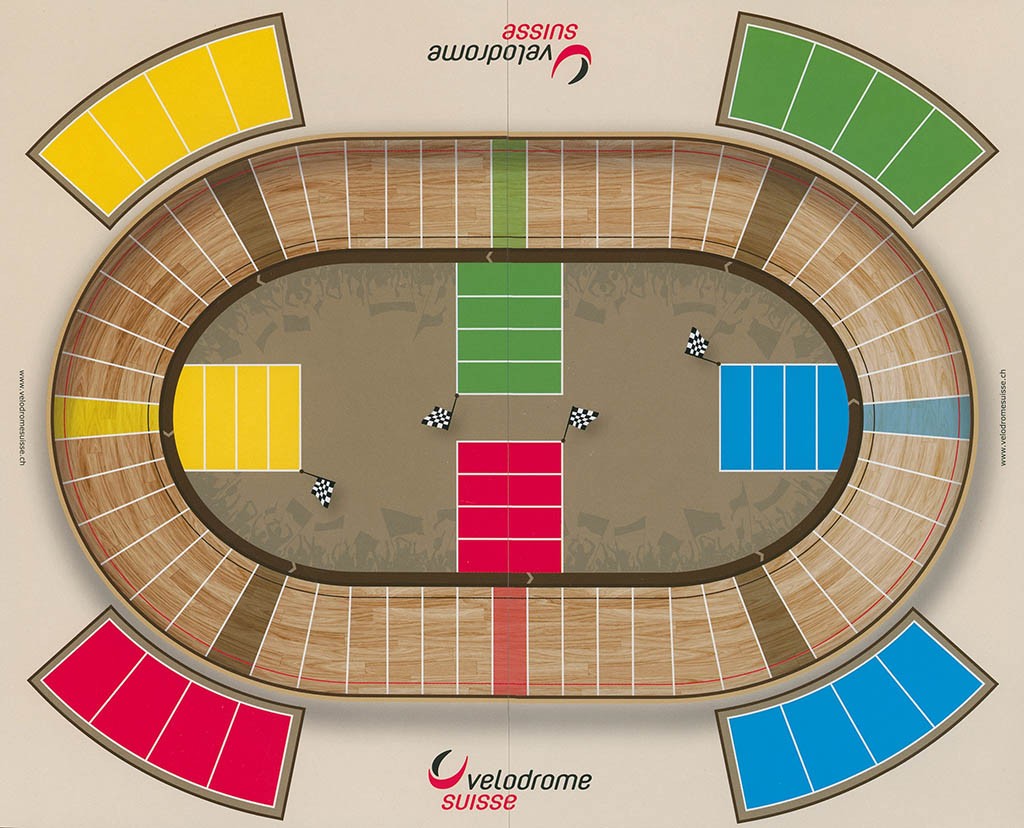 Being sponsored by a cycling track, it makes sense that the board looks like one. The board, by the way, measures 39x31 cms,  while the box is 32x20x3 cms. However, even though you would not say so at first glance, the rules of this game (included in German and French) are of the Parcheesi (Eile mit Weile, in this case) type: The riders start at the coloured fields outside the track, need a throw of five to enter the track, and the goal of the game is to get all four riders on the four coloured fields with a checkered flag on the pelouse after completing a lap. The first player to do so wins the game. 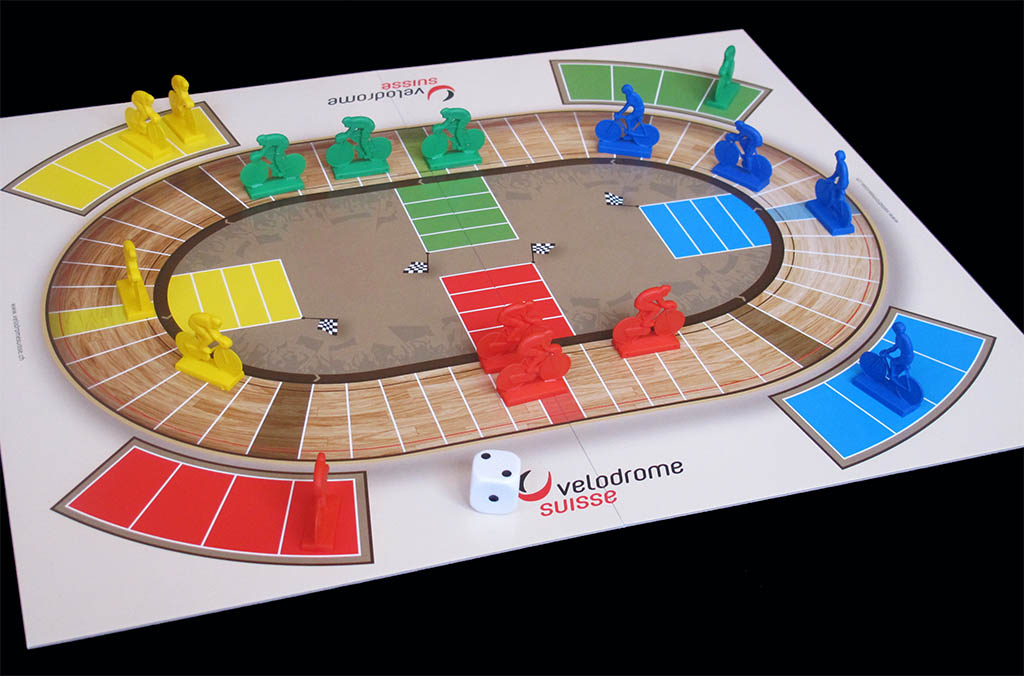 I have been wondering whether this game would not fit more properly in the non-realistic games section, or even if I should start a parcheesi-based-games section (check other such games here, here, here, and here), but finally, based mainly on the board design, and also on it being sponsored by an actual velodrome, I have decided that this game belongs to the track cycling section. (Another factor in the decision may have been that I received another team-pursuit based game almost simultaneously, and that must mean something). 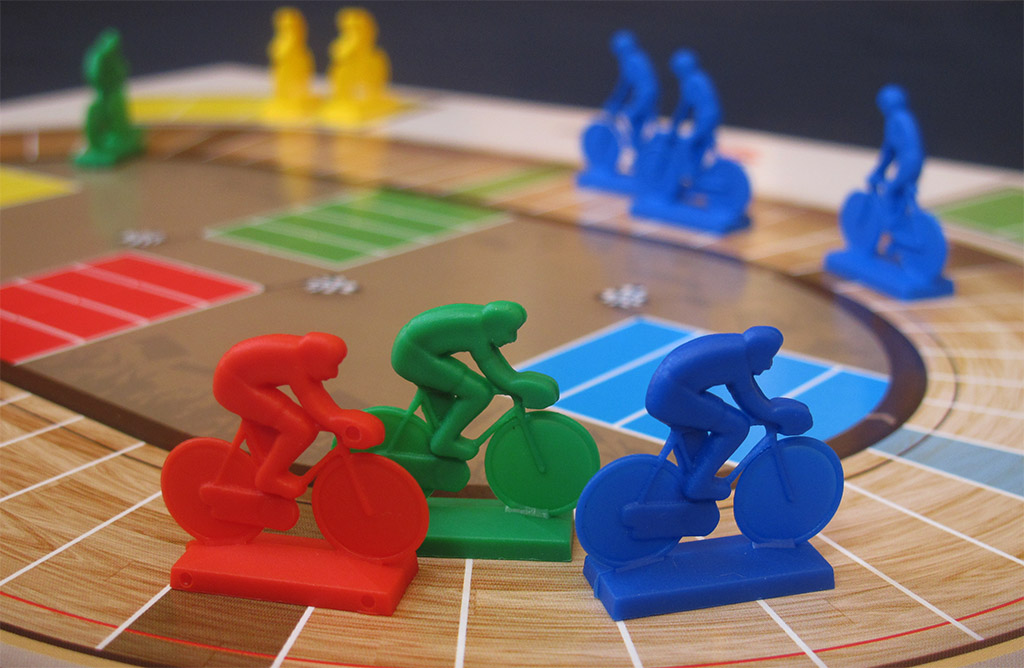 The riders included in the game are the usual type (usual in modern non-expensive games, I mean). However, at least in my copy of the game, the blue team (and only the blue team) has three inusual riders in a different position. There was probably some kind of supply problem at the moment the game was made (I think blue riders were not available either when I made my own Maillot Arc-En-Ciel game). 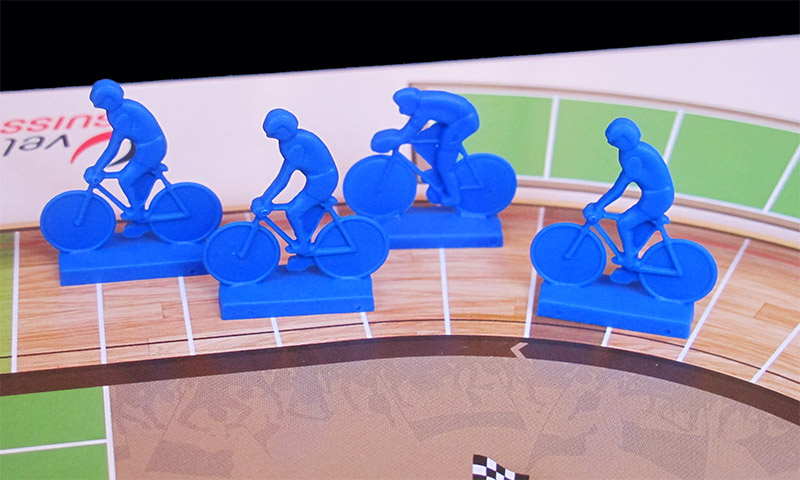 Strange composition of the blue team. It looks like three of them are not racing hard enough.

Thanks to the human chain without which I would never had been able to include this game here: Elena at the Tissot Velodrome for kindly answering all our emails and calls, Heinrich for cycling with the game on his backpack from Grenchen to Zurich, Ariela & Nicolau for flying from Zurich to Barcelona with the game, and Carlota for coordinating the whole process from her Zurich headquarters.