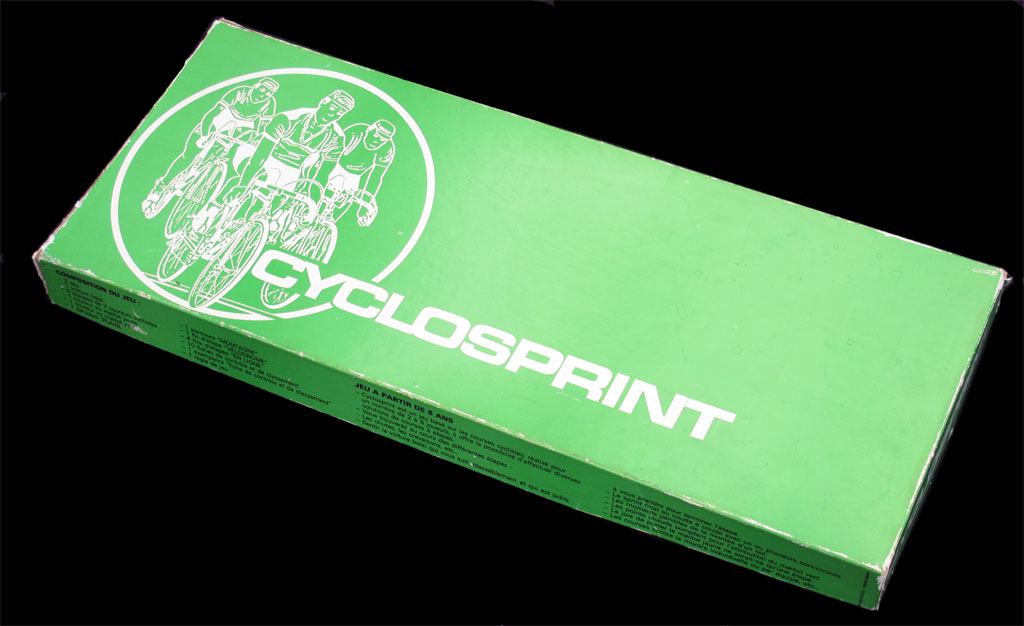 Self-produced French game with a disctintive 1970s flavour. As is typical in this kind of games, it combines overambitious features with rules that are  quite obvious in general, though they may feature some surprises.

This game is big (the box measures 65 x 28 cms) and heavy, specially due to the seven (!) boards included. Five of these boards are just different finishes for various stages. Another board ("parcour montagne") can be either the end of a stage or a stage in itself, while the bigger board "("parcours plaine") is the one used in mosts races.

A maximum of six players manages a team of two riders each. The riders are seventies' Cofalus (5cms, smaller than the ones featured in later games like l'Echappée Infernale or Les Géants de la Route), and two extra riders are provided for the yellow and green jerseys. The riders are oversizer for the board (which is nevertheless quite big), and there is also a trailing car (voiture balai) which is an Aronde (scale HO), though I an not 100% sure if it is the original car included with the game (every time I see a copy of this game it has a different car). 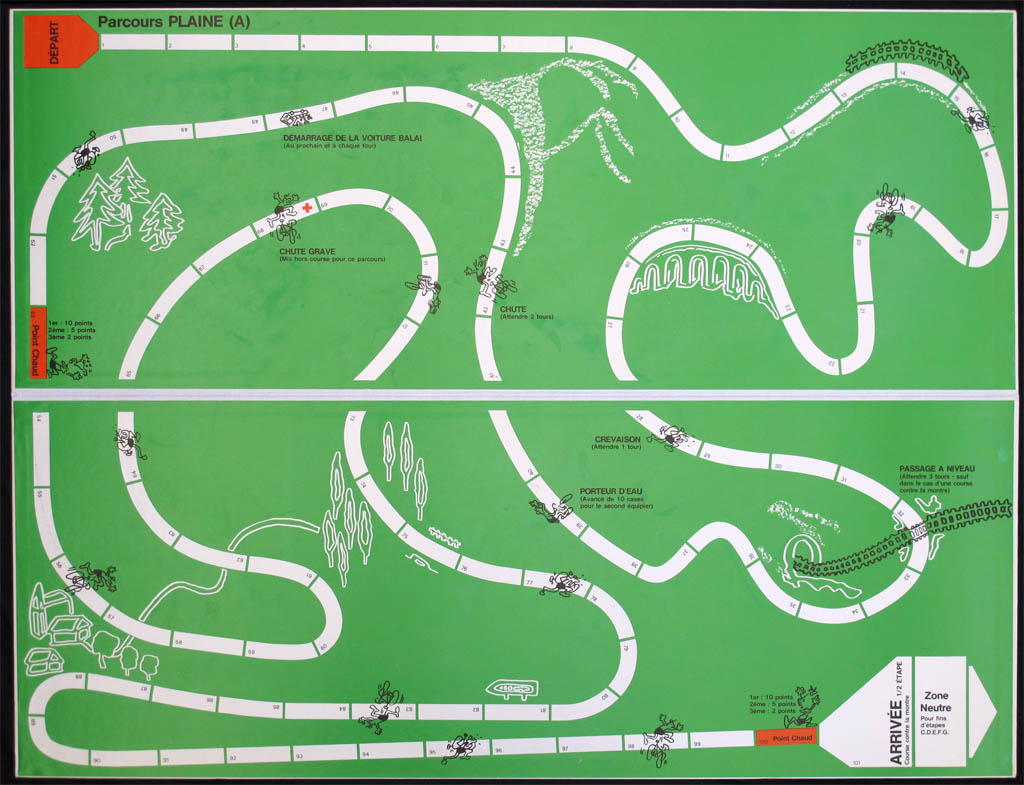 Though the rules of the game are quite long to read, they are deceptively simple. Most of the time you throw two dice and move your two riders. You decide which rider you move with each dice, considering that you are not allowed to move to a field occupied by another rider, and that there are certain fields that give you advantages or disadvantages.

An interesting/unusual rule, though, is the one for the trailing car. It starts its movement when the first rider reachs km. 47, and stops at km 100 of flat stages. If there are two or three players in the game, the trailing car moves 5 fields forward in each movement. For 4 or 5 players it just moves 4 field. With 6 players, it just moves 3 fields. All the riders caught up by the car are out of the race, though they may take part in subsequent stages.

You need a big table to play.

For mountain stages, movement rules change. Before a climb, riders have tos stop compulsorily in the "Plateforme" field before the climb (in which there can be no more than three riders at a time). Then, during climbs, to progress to the next field riders must throw exactly the number inscribed in that field. If the field ahead is blocked by another rider, you must throw the number corresponding to the first free field, to which you will move. As a result, riders tend to form pelotons in the climbs, and these pelotons disband quickly in the descents.

By the way, there is no trailing car in mountain stages. 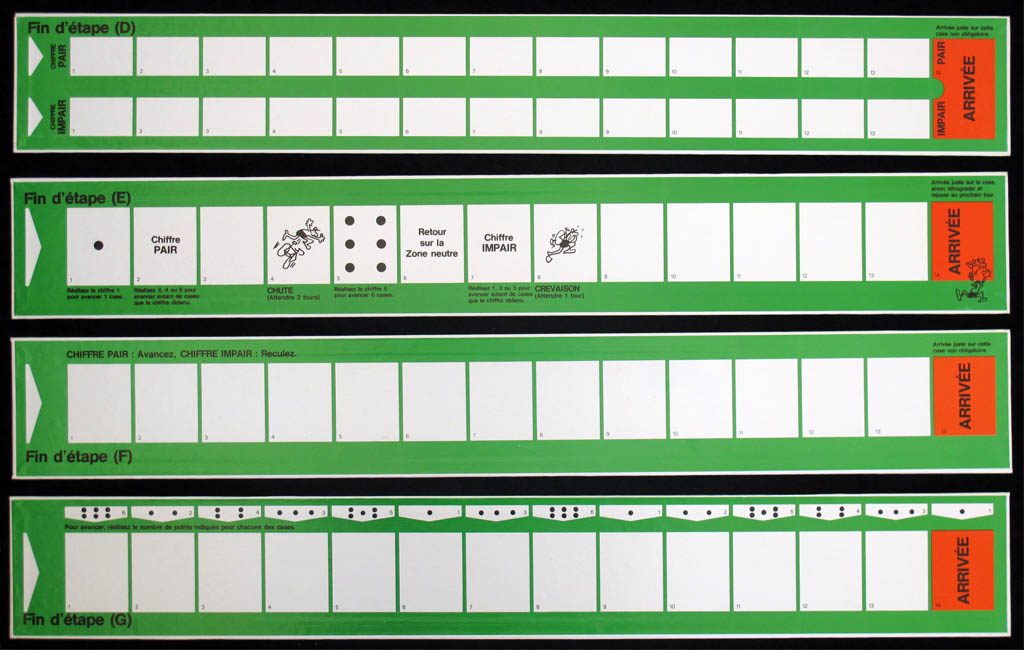 Another unusual feature of this game are the different stage finishes. Riders have to arrive to the neutral zone (last field) and then they move onto that particular stage finishing board. What is most unusual is that every finish has different rules. For instance, in end of stage G you have game-of-goose rules, while in end of stage F you move forward with even numbers but backward with odd numbers. In the velodrome, you have to fall exactly on the finishing stage or else ride another lap. A flat stage can end with a climb, using the B' part of board B.

Cyclosprint also provides rules and a booklet to keep the overall, green jersey and team standings. Here there is no surprise, the rules are similar to those of many other similar games. 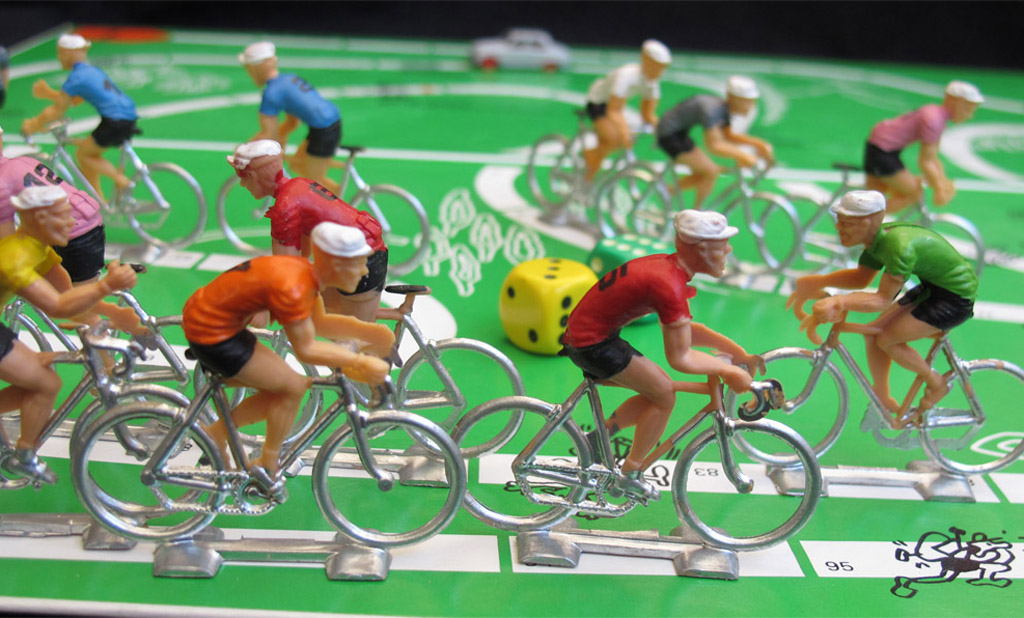 Contents of the box (with the bigger boards removed) 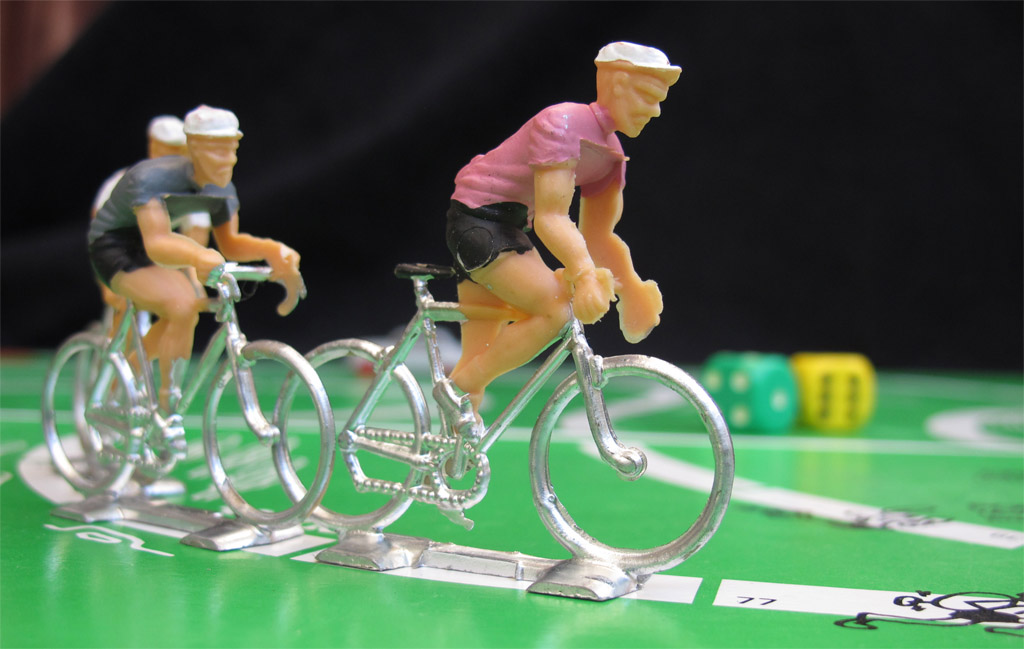 Close-up of the Cofalu riders.