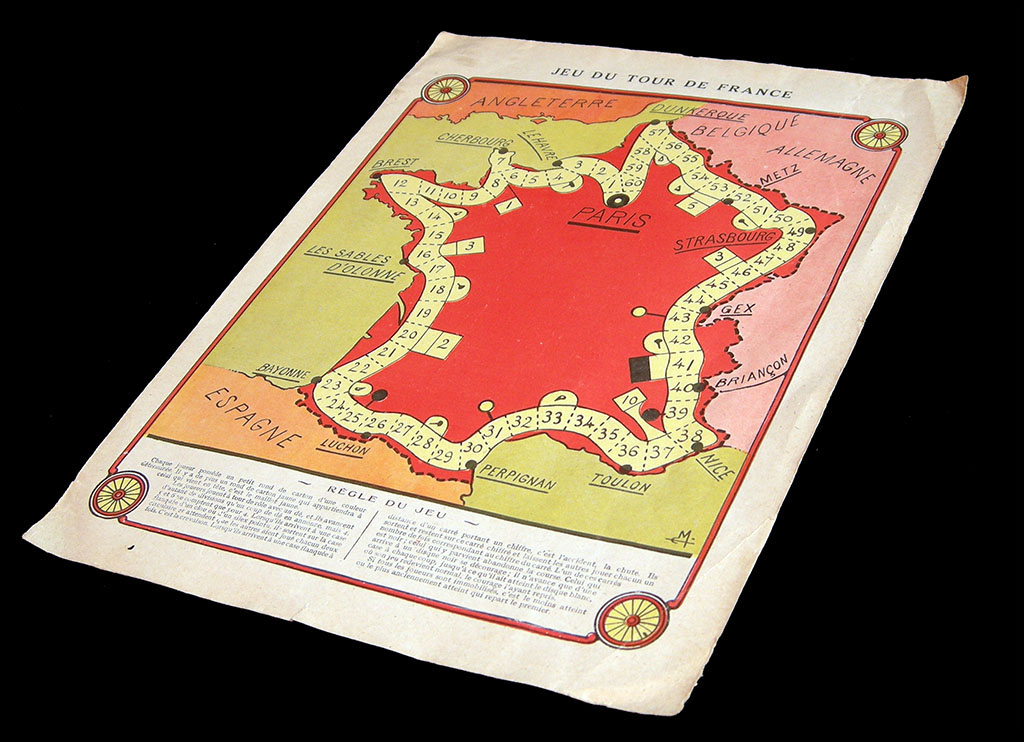 This is an old Tour de France game. It is a simple game printed on a thick paper sheet measuring 33 x 25 cms and it is part of a collection of games (see below). There is no indication of the maker or of the year the game was published. The only clue, which I was and still am unable to decipher, was the "M." signature on the bottom right corner. I used to have this game under "maker unknown, 1950s" until an email from Marc Radenac made me reexamine it. 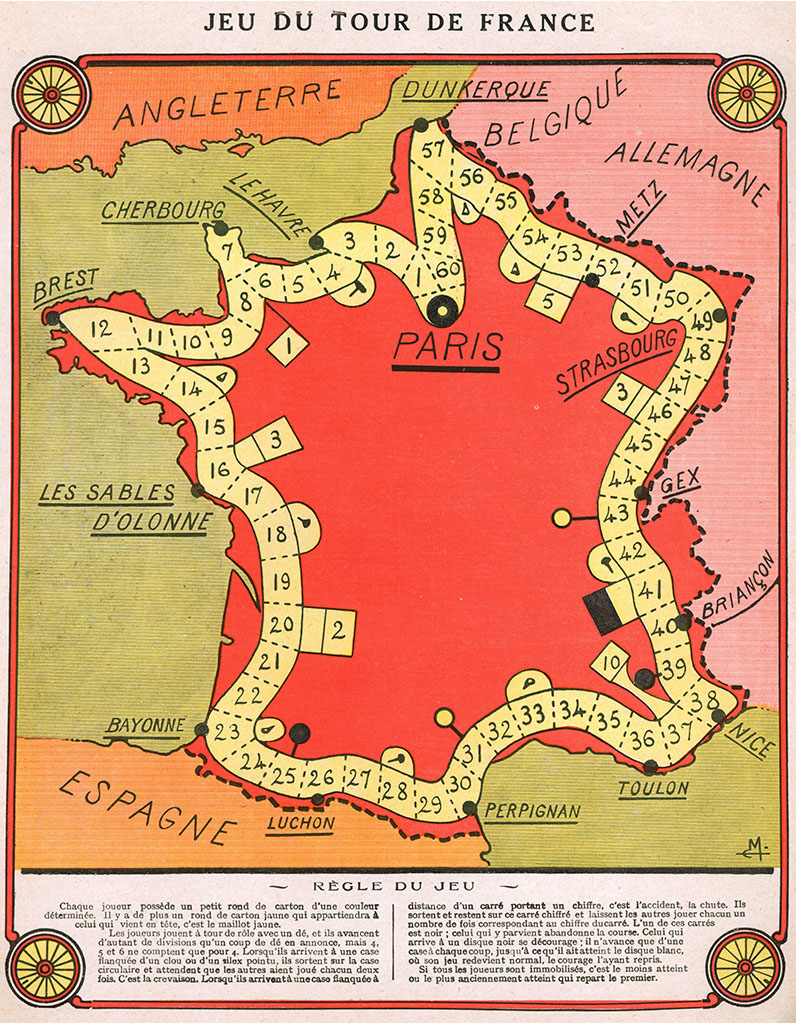 As I should have checked before, this game follows exactly the stages of the 1924 Tour de France. As I have written elsewhere, this is enough for me to date a game of being (roughly) of that year. By the way, I have another game featuring the same Tour de France, and these two are the oldest Tour de France games in my collection and maybe (only maybe, as there are more old games to be discovered or properly dated) one of them is the first Tour de France game ever made.

The game is played with a die, but 5 and 6 count for 4, so it makes a 123444 die. All incidents are negative (punctures, falls..) What is unusual about the rules is the fact that when you land on a square with a black circle you are exhausted (you find these in the Pyrenees and the Alps) and you advance one square at a turn until the next white circle. 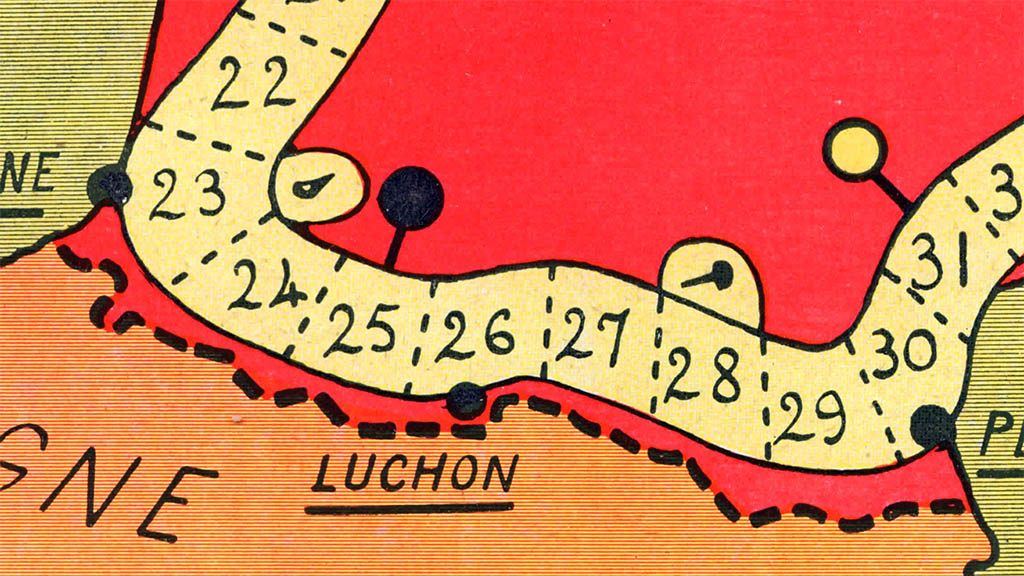 In this close-up of the Pyrenees stages we see that if you advance one square at a time from square 25 to 31, you will fall on a puncture on square 28. The rules do not say if you have to lose two extra turns. I do not think this is the case since, not only it is too heavy a penalty, but in the Alps that would mean abandoning the race (in square 41). 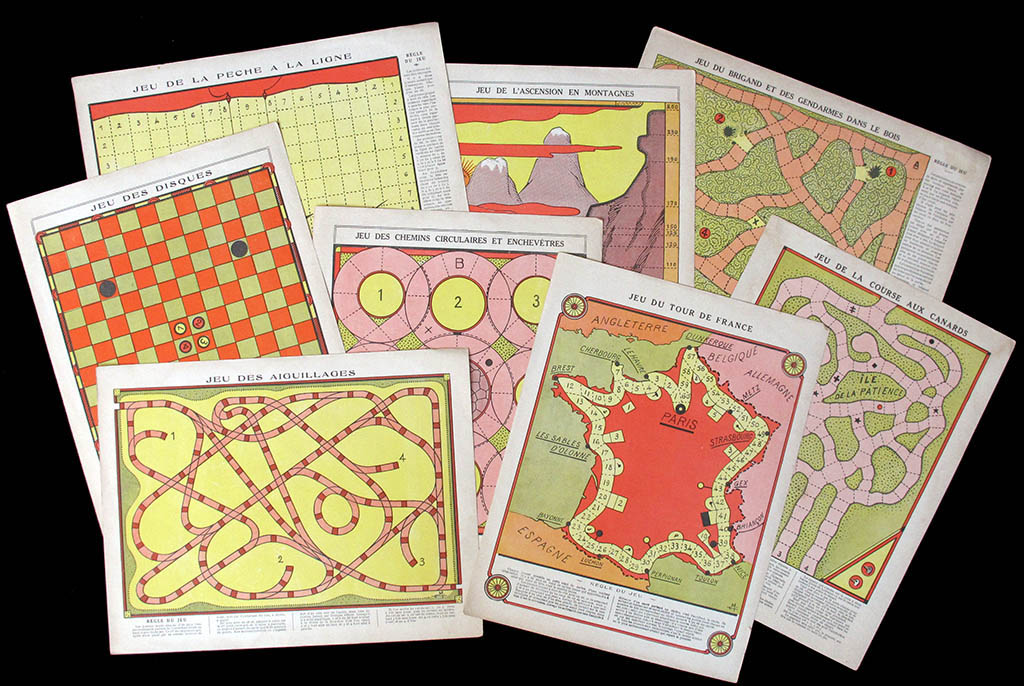 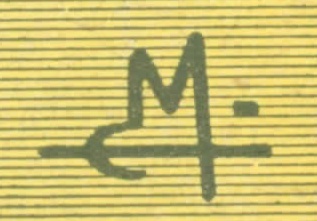 This signature appears on five of the eight games in the collection. In case you wonder, the ones in which it is not present are JEU DE LA PECHE A LA LIGNE, JEU DE LA COURSE AUX CANARDS, and JEU DE L'ASCENSION EN MONTAGNES and JEU DES AIGUILLAGES. 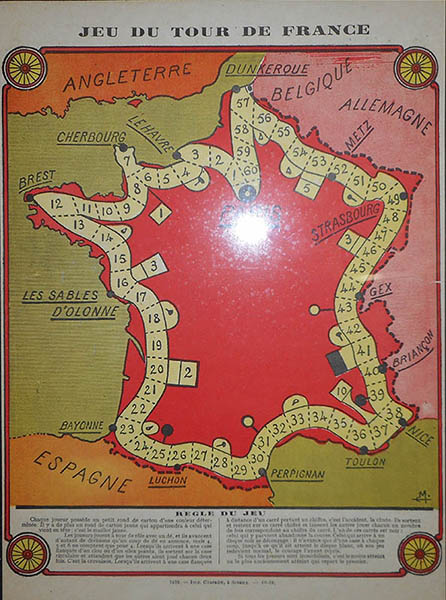 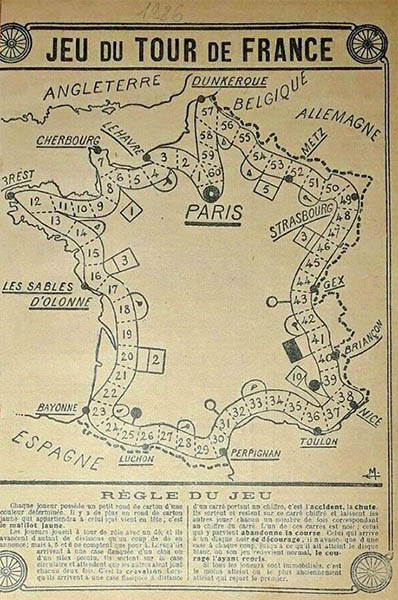 Furthermore, there is still another version of this game (and another possible date). Marc mentioned a conversation with Didier Maria, who sent a picture of a black and white version of the game. According to his information, it might have appeared in the magazine 'L'Intrépide" sometime in 1926. So far we have not been able to find the exact magazine.

Thanks Marc & Didier for sharing their findings.