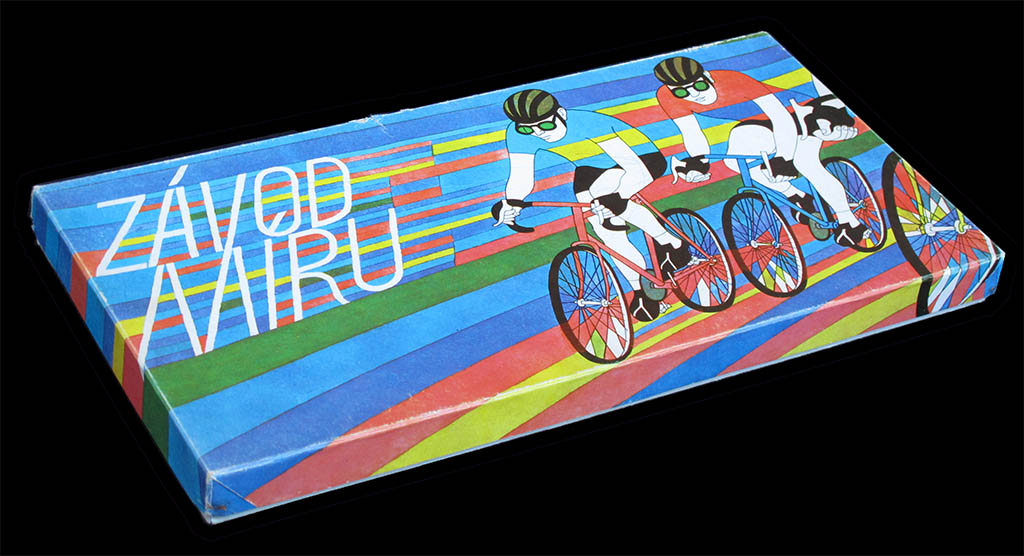 This is another game named after the Peace Race, in this case one made in Czechoslovakia which, therefore, uses the Czech name of the race. (However, this is not always the case, a later game by the same editor uses the French name of the race). In case you wonder what do the "PBW" flags on the board mean, they mean "Prague Berlin Warsaw", which was another name for the race, though the order of the letters changed depending on the order the cities were met. 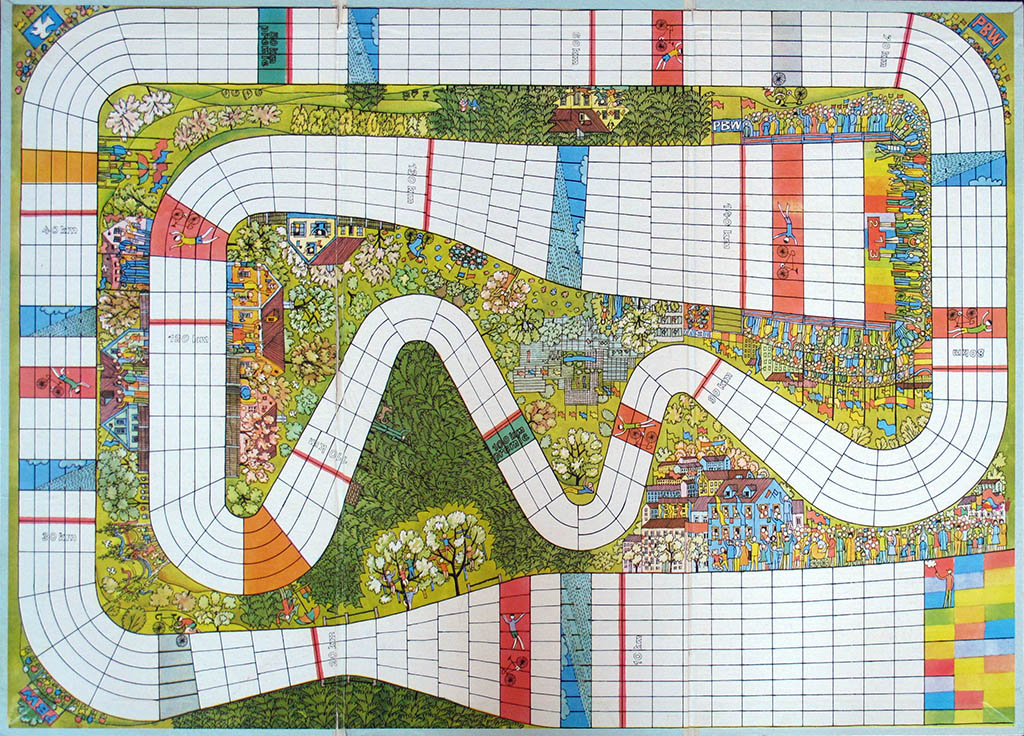 As you can easily guess by the board design, this game does not represent any particular edition of the race. In fact, as many other games in the (long) stage races category, it offers the rules to play a single stage, and a table to keep the score for a stage race.

The board is 144 squares (Kms) long, and every tenth square there is a 10-km mark where the first three riders are awarded points for the purple jersey classification. The marks for the 50th and 100th square/Km are different since they award point for the King Of the Mountains classification (green jersey). Points for the GC (yellow jersey) are awarded at the finishing line.

Of course, as in most Socialist Bloc games, there is also a team classification (blue jerseys) which is probably the most important.

There are 12 wooden cyclists divided in 4 teams of three riders. The game, thus, looks like it is designed to be played by 4 players, but the rules specify that it can be played by one to four players. Why not, since it is a straightforward roll-and-move game with no tactical decisions to be made.

The small round holes is where the "jerseys" are supposed to be placed. Unfortunately these "jerseys" are missing from my game, but I have seen a picture where they seem to be small plastic cylinders. According to the rules there are "6 válecku (trykoty) ve ctyrech barvách", which means "6 jerseys in 4 colours" (of course there are three blue jerseys, blue being the colour of the team classification). 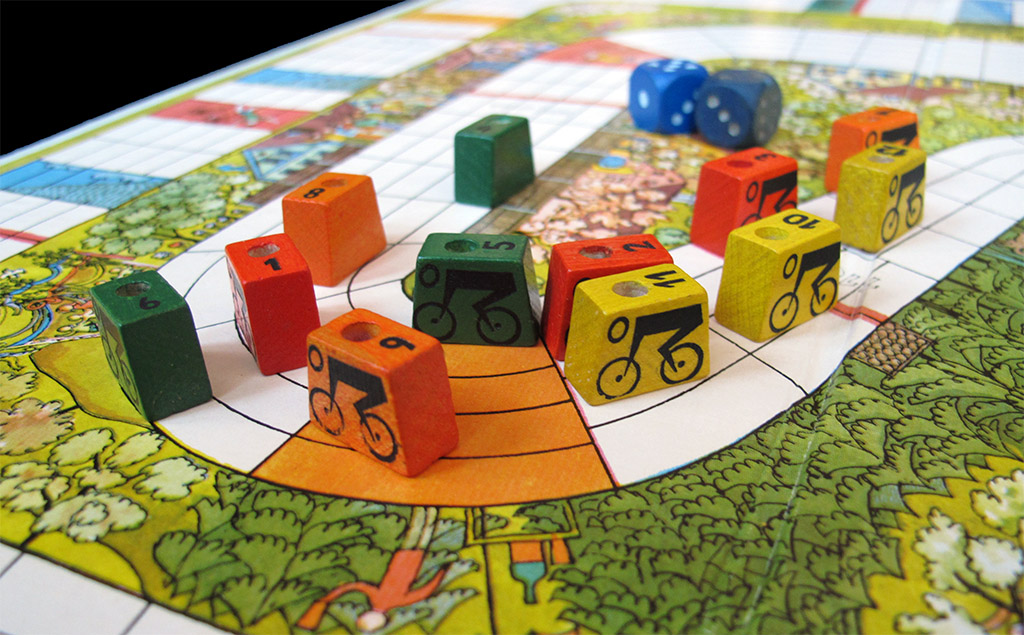 Unfortunately (but not infrequently), the riders are only printed on one side of the wooden pegs.

As you can see, the game is played with two dice. By the way, the riders on the pictures above are not correctly placed (I took the liberty for the pictures). The first rider to arrive on a square is placed at the rightmost place, and will move first in the next turn.

I do not know if I like these faceless crowds. Is that a political comment by the designer? 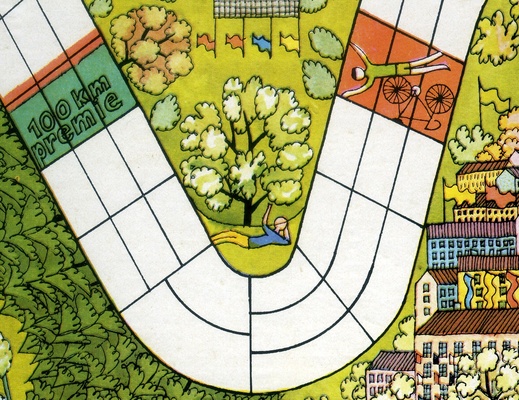 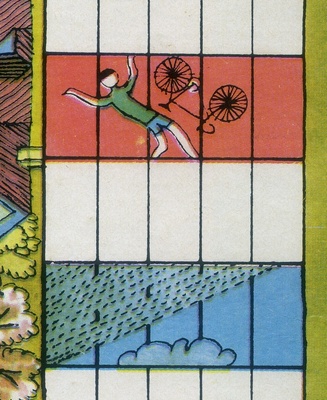 The colour printing is not too good either. (It is not that my pictures are out of focus)

Of course we find the common race incidents (punctures, falls: miss one or two turns) but also rain )move only one square in the next turn). 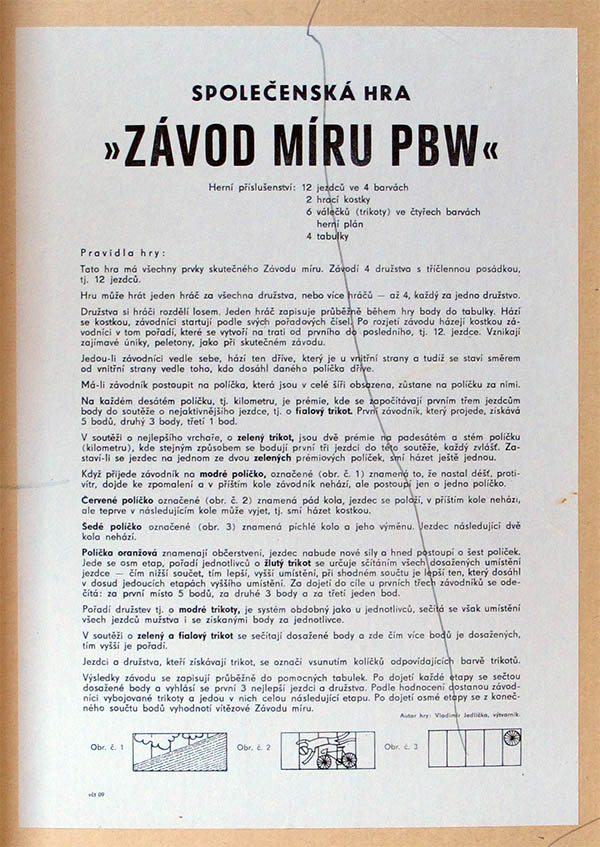 Here are the rules in case you want to check for yourselves. 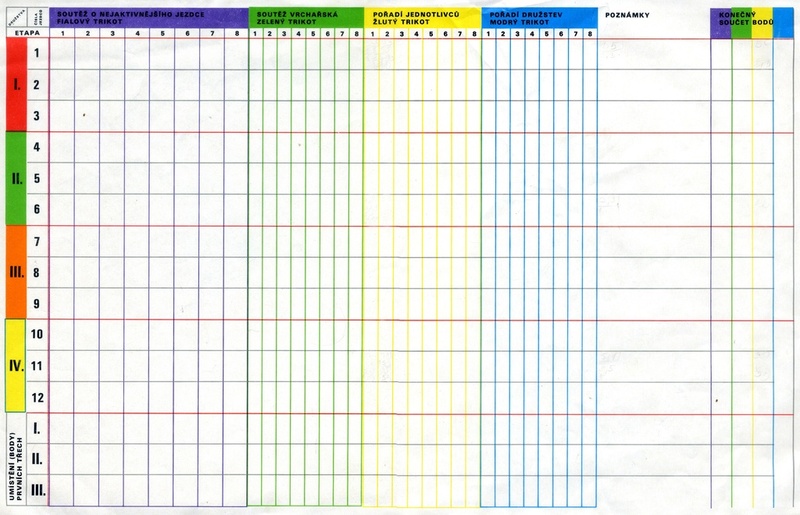 Here is the scoring table. As you can see, there is room for eight stages.

Under the box we find a glued piece of paper and a rubber stamp which should probably help us to date the game. However, I am not really sure how to interpret this. On one hand we find a "78" in the PN number (not sure what "PN" means either), which might refer to the year the game was made. On the other hand, we have the rubber stamp which reads "6.11 80", and which of course is a possible date too. Both possible dates are plausible, and according to the touch-and-feel of the game. So all I can say is that this game was probably made sometime at the end of the 1970s.

Thanks (again!) Gordon for the tip that allowed me to get this game.