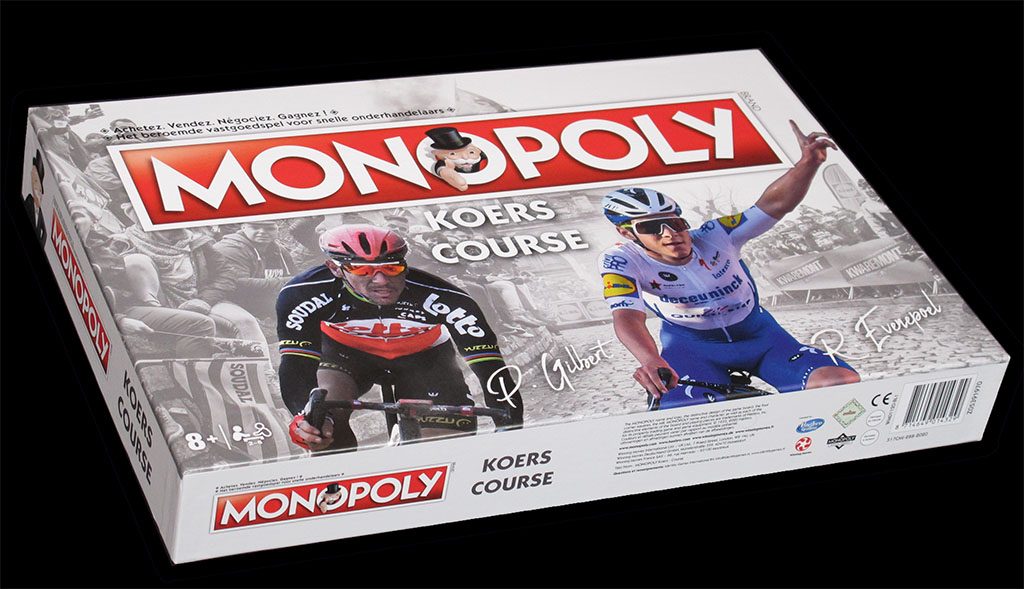 A cycling-themed game of Monopoly? Who could have had such idea? Well, it looks like many had it before (including yours truly) and some even went as far as releasing a non-official cycling Monopoly. So, did the world really needed another cycling Monopoly game? Well, I am not a Monopoly fan, and of course it is not a racing game (though even this is debatable), but who am I to say that the world does not need more games? So, ladies and gentlemen, here is the first officially licensed cycling-themed Monopoly game, complete with an astonishing number of logos, sponsors and license and copyright notices.

In fact, there are so many logo and names on this game that I was not so sure who I should credit as game maker or editor. According to the back of the box, this game is has been released by Squadra Sports Management (a sports management agency representing world class cyclists) and GROEP24 (an amalgamation of 6 brands which "organize numerous comedy, magic and music shows, promote your event and release special editions of the world famous board game Monopoly"; one of the brands is Monopolystore.be, where you can buy this game). By the way, this is a limited edition (of 2000 according to Winning Moves website, but that was probably the first edition). There has already been a second edition of the game, but in case you are interested you'd better hurry up.

There are two versions of this game: the one featured here is the bilingual edition (French/Dutch) but there is also an English version of the game. I have not seen the English version but I have no reason to think that the riders pictured on the box are different. However, notice that they are a Flemish cyclist (Remco Evenepoel) and a Walloon (Philippe Gilbert). 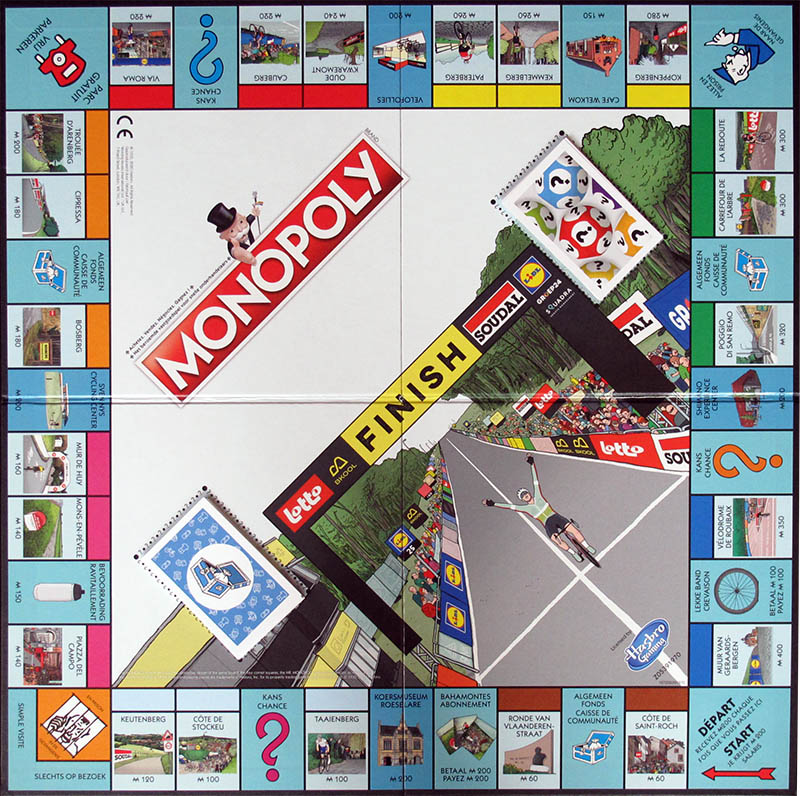 Being an official edition, the board looks like, well, a Monopoly board. It measures 50 x 50 cms (and the box is 40 x 47 x 5 cms). The rules, of course, are also those of Monopoly. The "cycling theme"  is the fact that in this version of the game you do not buy and trade streets but rather famous spots related to cycling classic spring races.

Notice that on the board there are still more logos. I guess that licensing a Monopoly game is quite expensive and you need a lot of sponsors.

The best of this game, by far, are the cute illustrations. The worst is that the name of the illustrator is not mentioned anywhere (or at least I have not been able to find it).

As you probably know, there are 22 streets to buy in a Monopoly game. In this case the property items they are not grouped by the races to which they belong, but by some subjective value order. The most represented race in this game is the Tour of Flanders, which has no less than seven famous spots represented in the game (Ronde Van  Vlaanderenstraat -that's in Kwaremont, by the way-, Taaienberg, Bosberg, Oude Kwaremont, Paterberg, Koppenberg and Muur Van Geraardsvergen -aka Kapelmuur / Mur de Grammont-). Needless to say, many of these here are also part of the Omloop Het Nieuwsblad and other lesser known races.

The remaining five spots are Amstel Gold Race's Keutenberg and Cauberg, Strade Bianche's Piazza del Campo, FlŤche Valonne's Mur de Huy and The Kemmelberg, generally known for being part of the Gent-Wevelgem race, but also regularly included in the Four Days of Dunkirk, the Three Days of De Panne and other races. In this case, as in the aforementioned Tour Of Flanders spots, by not grouping the property items by races the game leaves the interpretation open about which races are actually represented.

Of course, the decision to have only spring classics in this game (why?) leaves out the Giro di Lombardia, which is a pity. I miss the Madonna del Ghisallo in this game.

Most expensive property in this game: Muur Van Geraardsvergen and the Velodrome de Roubaix 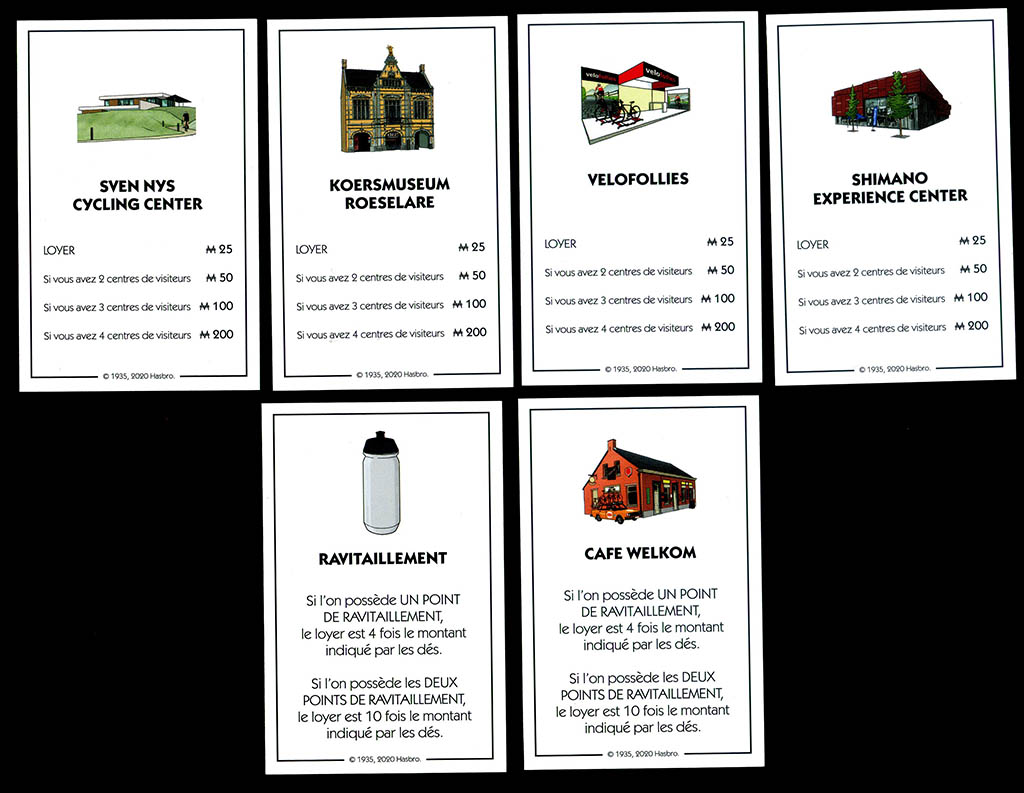 The train stations and utility properties have also been replaced by cycling-related places. 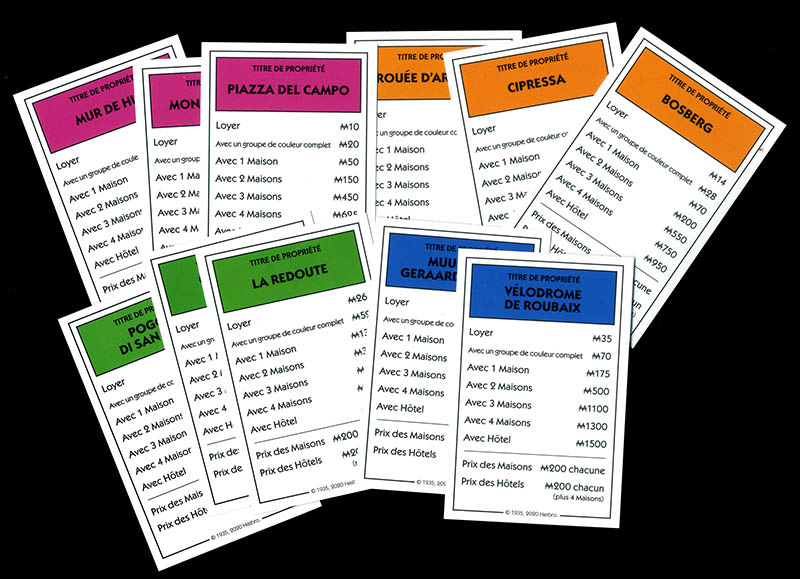 However, what has not changed is that you build houses and hotels on your property.
Would you really build a house on the Trouťe d'Aremberg? 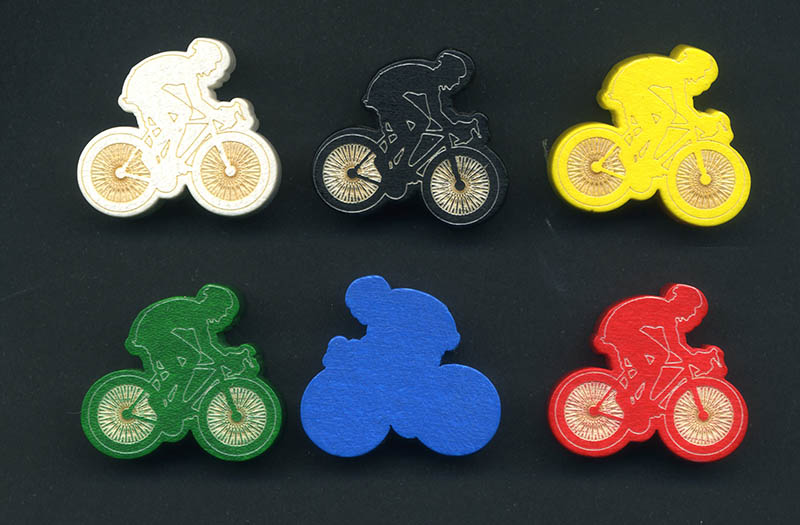 Monopoly is a game for 2 to 6 players, and this does not change in this version of the game, but there are 8 (?) metal charms included with the game, and unfortunately they are not cycling-related. Probably that is why I received along with the game (but not inside the shrink-wrapped game box) six cute cyclist-shaped coloured wooden counters. As you can see, and as is often the case with wooden game pieces, the riders are only printed on one side.

And in this case I would say they are printed on the WRONG side of the wooden figurines :-(

Here are some of the non-cycling metal charms. Compare to those included in the game Cycle-opoly, which were cycling-related indeed. 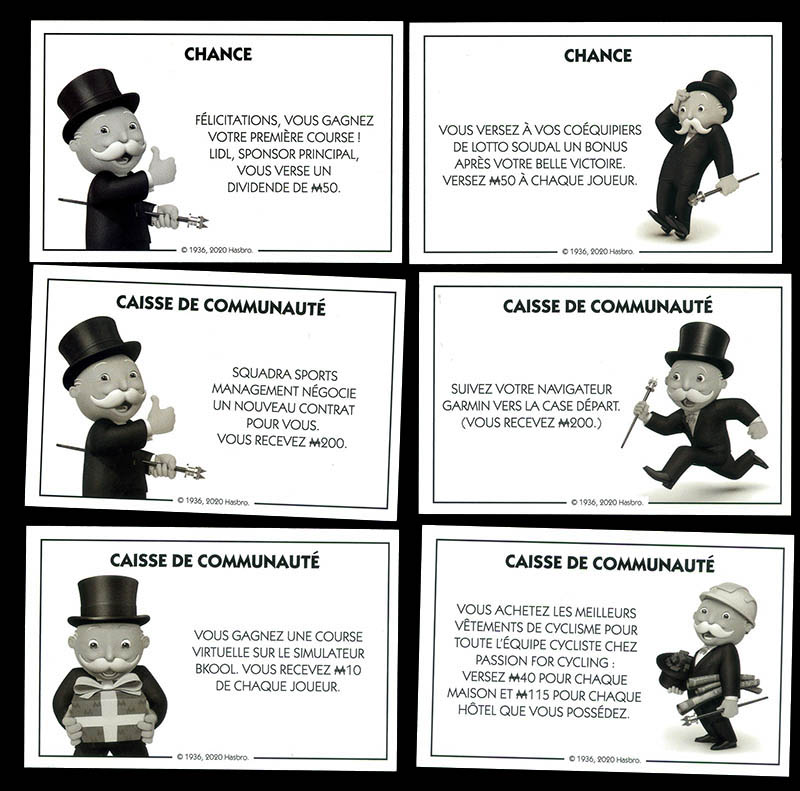 Since my edition of the game is bilingual, there are two sets of Chance/Community Chest cards, one in each language. Many of them mention sponsors too. 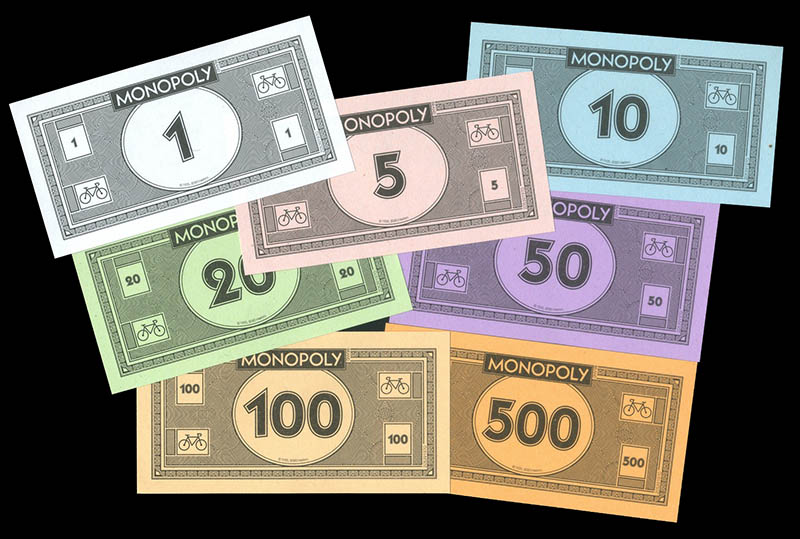 Game money (specifically printed for this game, I guess, since there are bikes on them). 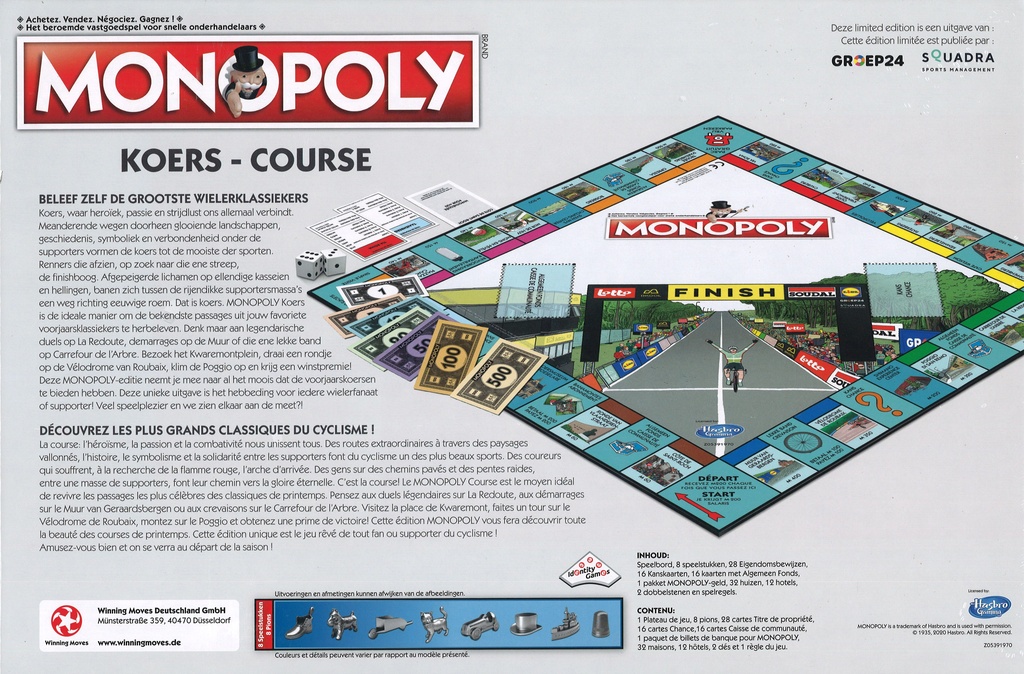 Back of the box. Notice the Hasbro, Winning Moves and Identity games logos. 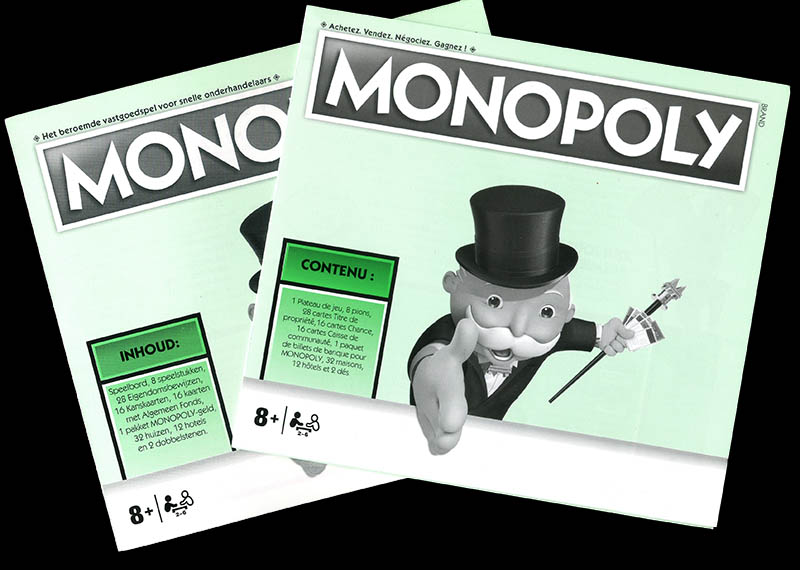 I wonder if this advertisement is common to all (recent) Monopoly games and, if so, when did they begin to include it and what's the point of including it. I mean, Monopoly is an outdated game the rules of which do not stand up to modern scrutiny anyway, so why wonder messing with the way people choose to play it?