CYCLING BOARD GAMES HISTORY IN 20 GAMES

I wanted to make this list shorter. I started with 10 games, but  I needed more. Then I tried with 15 games, to commemorate the XVth anniversary of this site, but I still needed more. So here is a list of 20 games that are relevant for the history of cycling board games.  Of course this list is personal and highly debatable. Feel free to disagree.

As far as I know, the first dated cycling game was published in a combination box called "THE BICYCLE RACE AND SKATING RINK" (Milton Bradley, 1885), which contained 5 games (Bicycle Race, Skating Rink, Hop Scotch, Cat's Promenade and Carrom).  It is mentioned in Dan Gindling's "Bicycle Collectibles with Price Guide" (see bibliography). I do not mean that it was the first cycling game ever published (though, of course, it is one of the very first) since not all countries have been studied by game historians with the same level of detail.  However, I only include in this list games that are featured in this site (which means, with little exceptions, games that I have in my collection). This is why I begin this list with the much better known McLouglin Brothers' 1891 game,  of which I own a couple of variations.

In the 1890s two Golden Ages concurred. While the introduction of pneumatic tires (developed by John Boyd Dunlop in 1888) steered cycling into its (first) golden age, the development of chromolithography enabled the commercial mass-production of relatively inexpensive board games, thus boosting what is known as "the golden age of board games". Many cycling games were produced in that decade in many different countries. Among the most well-known was this English game with hand-painted tin riders.

It took a while to develop "cycling rules" for cycling games. Most of the first games were just cycling-themed games of goose. Here is a nice example of a German game of the goose type with a history of its own (check the flags on square 12). 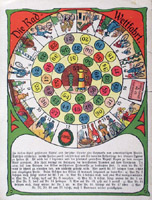 A natural development of cycling-themed games of goose are map games. This Saussine game is one of the longest-standing French board games, with the illustrations on the map reflecting the political and historical changes. It also features a crude velodrome game, which is the only cycling-related game when the map game became a car rally over the years. 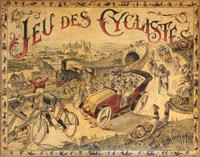 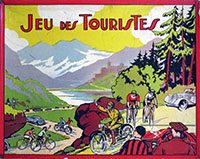 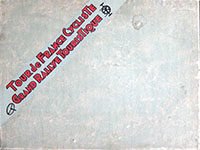 The popularity of cycling in the interwar period showed not only in velodrome games but also, naturally, in games about the Tour de France. This is one of the first (or maybe the very first) game named after the Tour, and it was a big success, judging by its many reissues. The rules, however, are still very simple.

Games often reflect the moors of the time, like this heavily politicized Italian game proves. Of course, Italy was another country where cycling was really popular.

The popularity of cycling led to the apparition of promotional games. Of course, some of the earliest examples are games that promoted bicycles or other cycling-related equipment. By the 1930s it was common to find cycling games promoting all kinds of articles, as this Switzerland game shows. 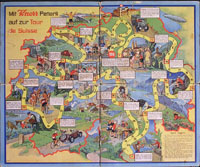 After the war, bicycles were progressively replaced by cars as means of transportation, but the cycling sport remained as popular as ever. The Tour was an international succes and games named after the Tour were produced in many countries.

On the other hand, the rules of cycling games were beginning to reflect the "cycling feel". Tafel Tour features different rules for the mountain passes and movement by cards instead of dice. Although it is hard to tell, for instance, which game was the first to feature different rules for mountains, the sum of its innovations probably makes Tafel Tour the first real cycling game.

Cycling races were popular behind the Iron Curtain too, and the Peace Race, being the most important race, was represented in a number of games. Eastern Bloc games had their own political agenda and often afforded more importance to the team classification than to the individual one. 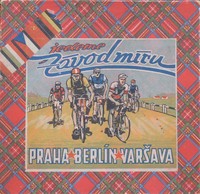 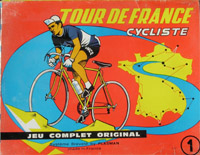 Simple games included in magazines or newspapers are very common, some of them very old, and most of them very simple. The series of games offered by the Corriere dei Piccoli in the sixties and early seventies are among the finest examples and show that these of  games do not need to be childish.

Although this is not the game that invented the movement of cyclists with cards instead of dice, and although its not even properly a "board" game, it is a very good example of how you do not need long complicated rules to have a real "cycling feel" built in the mechanics of a game. The many reissues of this game (still available after more than half a century) prove that I am not the only one who likes it.

There are not many games endorsed by professional cyclists, but the fame that Eddy Merckx achieved in his prime assured good sales to almost anything whith his name on it. Besides, this is not a bad game to play as long as you do not expect much strategy.

The search for realism and complexity in game mechanics was spreading in the seventies. A simple "game of goose with cyclists" was no longer an option except for the youngest. Homas Tour offers serious gamers a choice of tactical options which make it worth to spend the evening playing a bicycle race. Its 1991 German reissue received the most prestigious board game award and of course this game is still in print..

While a few games had wide commercial distribution, most cycling games were self-made editions of a few copies and very hard to find. With the advent of the internet, things have changed and games can reach a wide audience without needing a big initial investment. Some of these games can even become underground favourites, as is the case with Breaking Away, which has eventually found commercial distribution (in Japan!)  almost twenty years afer its release.

Investing a lot of money in a project does not necessary assure its success. Many game inventors think they game is the best, and some are willing to risk everything they have to back it. Unfortunately there are many cases of commercial failure. The biggest of these failures is probably this over-ambitius  and rather unplayable game, which went as far as to buy an "Official Tour de France Game" license and be released in different languages, only to leave a lot of debts behind (or so I have been told).

In the first decade of the XXIst century the "serious" gaming scene grew exponentially, but cycling games did not follow suit. The sport has not the same popularity as before (even if the Tour de France is still the most watched annual sporting event in the world). However, every now and then interesting games popped up. One of the best was Leader One, which has almost all a serious gamer or a cycling fan would need. (Notice that I use "or" and not "and" in the previous sentence"). 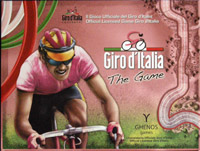 Flamme Rouge is the new sensation in cycling games, and with a reason. It appeals both to gamers and to cycling fans, but it also appeals to the family market. Since its release it has already had an official expansion (a second  is announced this fall), but there are many more unofficial expansions (specially "Grand Tour" variations) discussed on the internet, often with the support of the game creator. I would say that there is a little subculture being generated around this game and the future will tell how far it reaches. 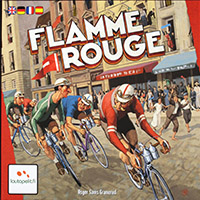